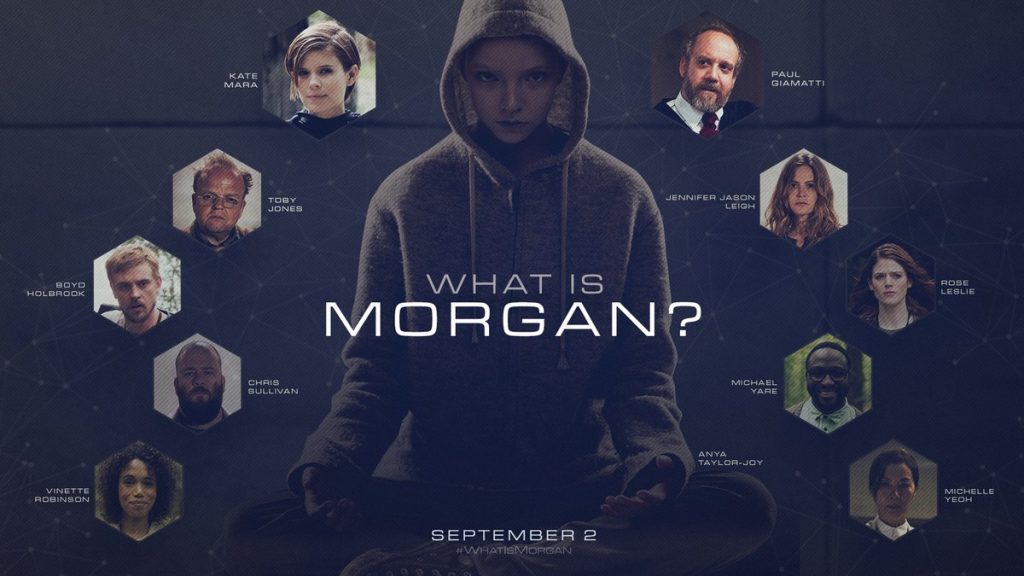 If you have seen any of the marketing for Morgan, you know that the campaign is based around the mystery of “What is Morgan?” After seeing the film, I do believe Morgan will be best experienced by knowing as little about the story as possible. All I will reveal about the plot is that an accident occurs early on, which leads to Lee Weathers (Kate Mara) visiting a top secret facility to investigate Morgan’s (Anya Taylor-Joy) mental state.

Over the past decade or so, there have been quite a few films that focus on Artificial Intelligence. The idea of bioengineering is not a new concept in film or television but rather a plot device that has grown in popularity upon fans of science fiction films over the past several years. Morgan tells a story that embraces the idea that audiences are already aware of what AI is. The story is focused on revealing the details of how Morgan responds and acts around others. It is not a film that spells everything out nor does the story spend a significant amount of time explaining the scientific background of Morgan. Instead, the film uses the “less is more” approach and spends most of the runtime focusing on Morgan’s behavior and what makes Morgan tick.

While I can see how some critics could criticize this film for being too simplistic and action heavy, I would argue that I found the film to be highly entertaining and just plain fun. While I did see the twist coming very early on, it didn’t effect my overall enjoyment of the film. I think the film ends in an intriguing manner that challenges the viewer to ask questions about the bigger picture. The film ultimately becomes a lot more than a story about finding out what Morgan is but rather why Morgan exists in the first place. I like films that pull the rug out from under the audience at the very end. 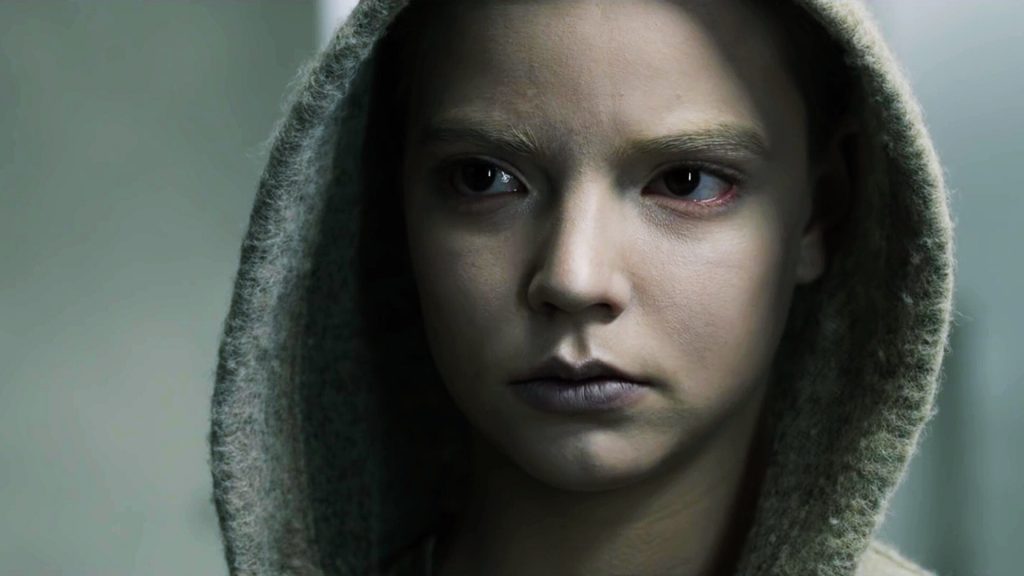 Regarding the performances, I think everyone involved did a spectacular job. While I could probably go into great detail about all of the actors, Anya Taylor-Joy and Kate Mara are clearly the stars of this film. Taylor-Joy is such a breath of fresh air as Morgan. She brings such life to this unknown form of AI. She shows a wide range of emotion but also kicks a lot of ass. Morgan is a well-rounded character that the audience ends up rooting for despite the events that unfold as the story progresses. Alongside Taylor-Joy is Mara who is also bad-ass as Lee. Mara portrays Lee as the strong and silent type. She doesn’t respond well to bullshit and has very thick skin.

The highlight of Morgan is a scene between Paul Giamatti and Anya Taylor-Joy. In this scene, Giamatti’s character, Dr. Alan Shapiro comes to the facility to conduct a psychiatric evaluation on Morgan. This 5-minute scene was done in one take and is fascinating to watch. The sequence begins with Dr. Shapiro and Morgan getting to know one another and talking about feelings and how Morgan has reacted to things in the past. What starts off as a simple conversation, quickly escalates to this intense back and forth with Dr. Shapiro screaming at Morgan provoking her to react to his demanding questions. Giamatti and Taylor-Joy showcase some real raw talent in this scene.

Morgan is the directorial debut of Luke Scott who is the son of Ridley Scott. I think Scott did a great job with the visuals as well as the pacing of the story. When I interviewed Scott, he pointed out that the original cut of the film was about 120 minutes long. Scott wanted to tighten up the runtime because he felt like certain scenes were too repetitive while others didn’t add anything new to the story. I appreciated what Scott did with the final cut of the film. In an age where almost every studio film runs over two hours long, I can respect that Scott wanted to make a fast-paced and entertaining film rather than draw it out with unnecessary scenes that didn’t add much. 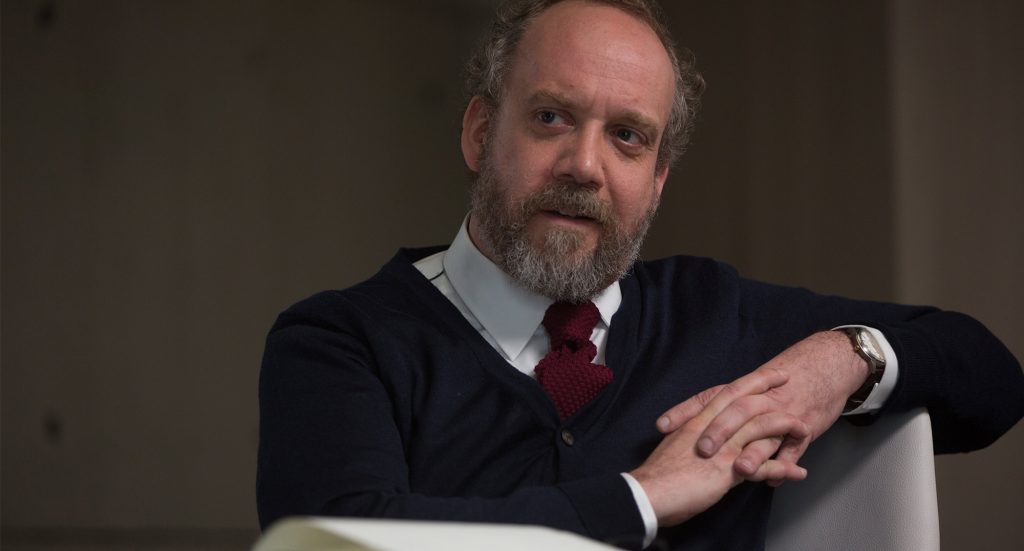 My only real criticism with Morgan was the script written by Seth W. Owen. This script was rumored to be part of the “black list” in 2014, so I am kind of shocked to report that it is the weakest link of the entire film. It’s not that the script is bad but rather that everything else about the film was stronger than the screenplay itself. I felt that the script was rather generic, but the performances and direction were so incredibly strong that they elevated the film to a whole another level. I feel like a lot of the dialogue was too basic and that the script didn’t ask enough from the actors. The benefit, however, is that Scott did a tremendous job casting the film, so they overshadowed the weaker elements of the script.

All in all, Morgan is an enjoyable and entertaining entry into the Artificial Intelligence film library. Morgan is a simple yet effective little film that should entertain most who see it thanks to the stellar performances and great direction. It’s part Hanna and part Ex Machina. Luke Scott shows great promise as a director and has an eye for finding the perfect cast to tell a story. Morgan is a film that will be best enjoyed knowing as little as possible about it before seeing it. This isn’t your standard AI film that spells everything out but instead expects the audience to take the story for what it is and enjoy. It isn’t a game changer in this genre, but it’s a damn good popcorn flick that kept me engaged the entire time.

Review: Morgan is 'Hanna' meets 'Ex Machina.'  If you have seen any of the marketing for Morgan, you know that the campaign is based around the mystery of "What is Morgan?" After seeing the film, I do believe Morgan will be best experien...
0
Average User Rating
0 votes
Please sign in to rate.