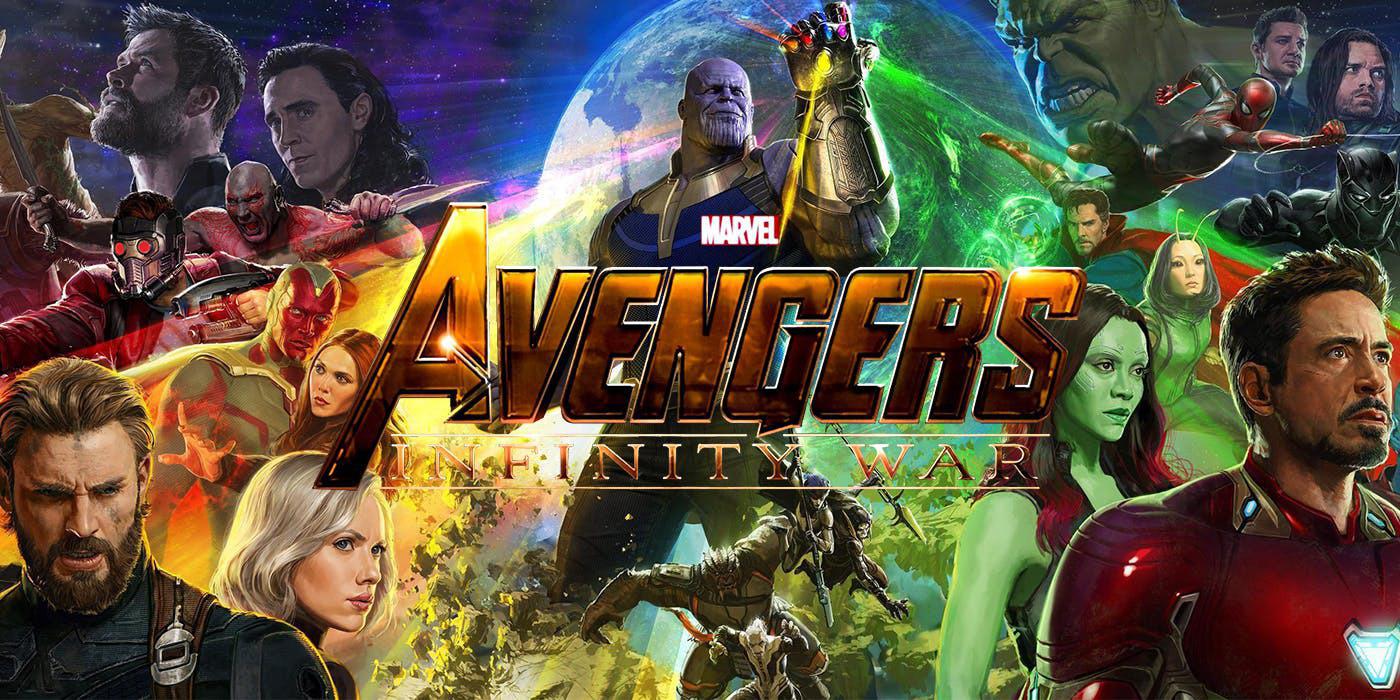 Review: Avengers: Infinity War is Well Worth The Wait

Marvel fans rejoice! Avengers: Infinity War is about to hit theaters, and all of your wildest dreams (and fears) are about to come true. Without giving anything away, the plot of Infinity War revolves around Thanos (Josh Brolin) trying to collect all of the Infinity Stones to destroy and rebuild the world. A lot of your favorite superheroes come together in three different story arcs to stop Thanos. What else happens? Well, you should see the film for yourself to find out.

I feel like with every new superhero film that is released; I open each review by saying that I am a fan of comic book films but have not loved all of them. If you have been counting, and I am sure you have if you consider yourself a fan, there have been a total of 18 films in the MCU leading up to Avengers: Infinity War. Out of these 18 films, in my own humble opinion, five of them have been incredible, five have been good, three have been disappointing, and five have been mediocre or plain bad. With that being said, Avengers: Infinity War is one hell of a superhero film and an epic event that was well worth the 10-year wait.

I have so many things to say about this film because it is one of those rare big-budget Blockbusters that does pretty much everything right. From the opening scene, Infinity War feels completely different from the 18 MCU films leading up to this one. The Russo Brothers have truly outdone themselves; they have created a superhero film that is not only thoroughly entertaining but incredibly well-rounded and full of depth. Infinity War is the darkest of all the MCU films thus far but fear not; there are still a lot of laughs as well. There are several moments where I found myself laughing out loud, but within a few short minutes later, that laughter quickly turned into devastation. Infinity War is the most emotionally effective Marvel movie to date, and the reason for that is because it isn’t afraid to push boundaries and take chances. 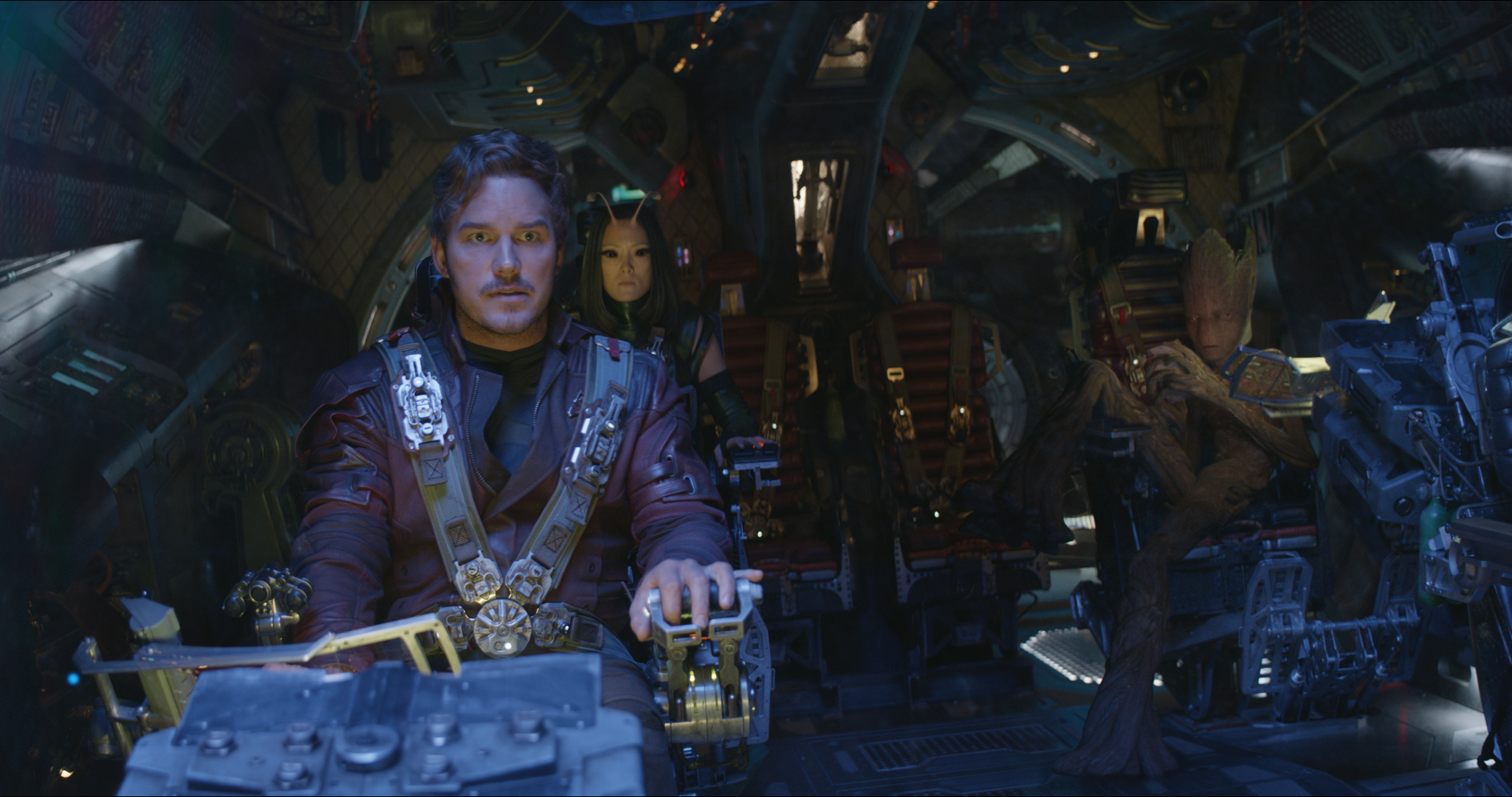 With a runtime of 2 hours and 40 minutes which includes the end credits, I was pleasantly surprised by how engaged I was throughout the entire film. The way that the Russos tell this story is superb. They break up the characters in what feels like three different vignettes within the same story. The pairing of each set of characters is spot on. I don’t want to ruin who is paired with whom, but I will say that by having them broken into these groups made the film so incredibly effective. It not only worked from a storytelling perspective but also managed to create a unique blend of character personalities that worked together which we haven’t seen before.

It should be mentioned that as a viewer, it is vital to pay close attention to the locations of where everything is happening during the film. This might be a bit difficult since there is a lot of ground covered, but it is important to note because of how the story plays out that it is essential to know where the characters are located. I should also point out that this is one of those films that will require repeat viewings to catch everything that is going on. There is so much happening in this film that I don’t think it is possible for anyone to catch everything going on until you see the film at least twice if not, three times.

I sort of lost count as to how many characters made an appearance in the film, but there was a lot of them but not all of them. Just like they did with the story and direction, the Russos make sure that most of these characters get their moment in the spotlight. There are a few characters who I felt were a bit glazed over, which I will discuss a bit later, but overall, I loved how the Russos managed to strike that perfect balance of having so many iconic characters together in one film without feeling like one or two characters got most of the spotlight. I was so worried that the entire film was going to feel like the Airport scene from Civil War happening over and over again, but luckily that wasn’t the case. While the Civil War airport scene was an amazing sequence, I am so glad the Russos realized that an entire film would not work if it were like that. 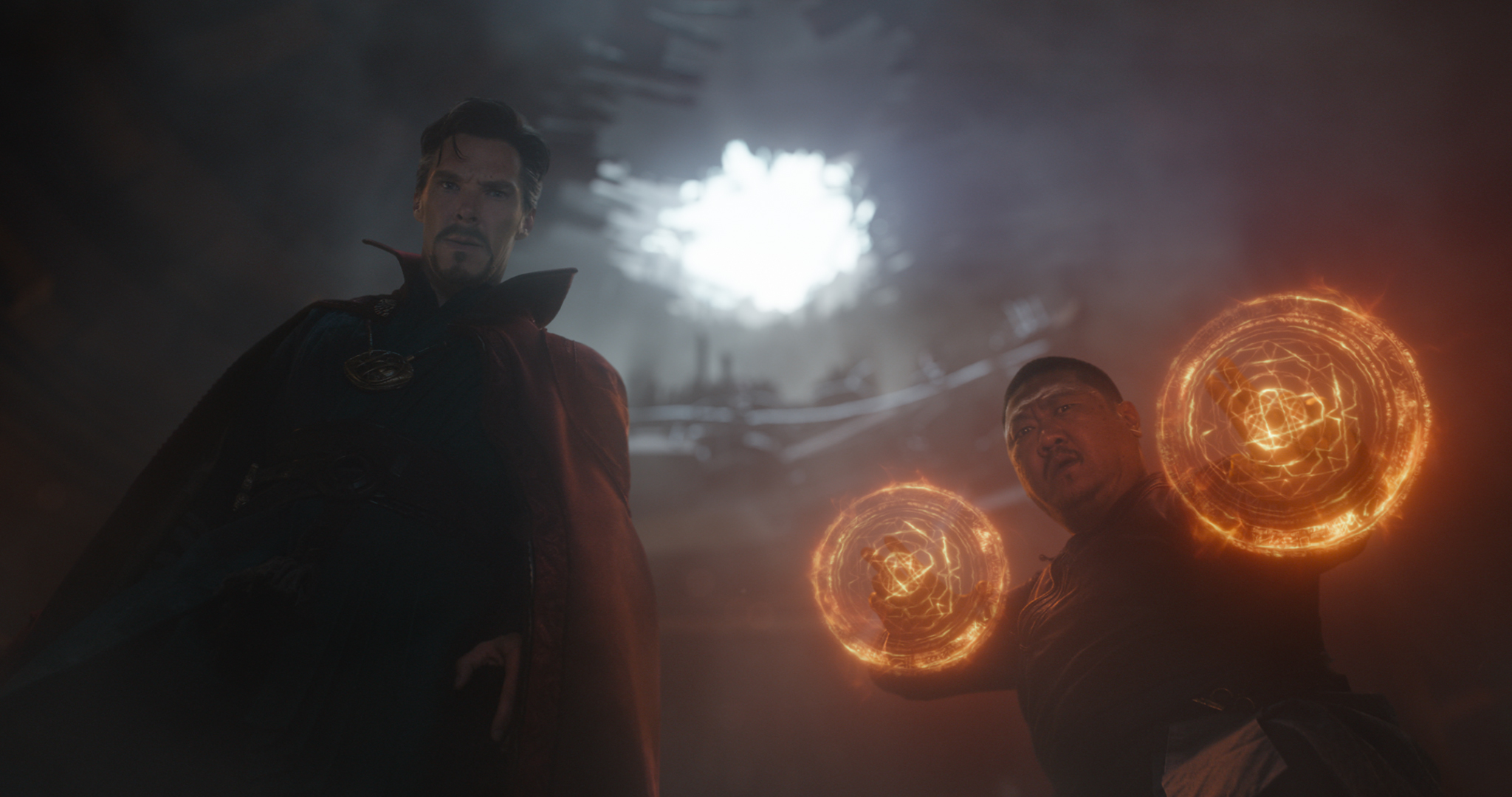 I was very surprised by which characters I found to be the most effective in the film. While I did enjoy Thor: Ragnarok for the most part, Thor has always been one of my least favorite superheroes of the current slate of MCU characters. To my complete and total surprise, Thor was my favorite character in Infinity War because I felt that Thor showcased so much range as a character. Without giving anything away, the film opens up on his character as well as some others from his world. What happens in this scene is shocking but works perfectly to set up Thor’s story arc for the rest of the film. This is the first time that I felt Hemsworth has proven himself worthy of this role and managed to show a wide range of emotion that included comedy and drama. I felt for Thor in this film, and I loved that I was finally able to root for him. I can’t wait to see what Marvel has in store for him next.

Other characters that stood out to me were Iron Man, Doctor Strange, Spider-Man, and all of the Guardians. It is important to note that I was so incredibly disappointed by Spider-Man: Homecoming and Guardians of the Galaxy Vol 2, so I was delighted to see these characters work so effectively in this film. Its hard to discuss what it was exactly that made all these characters work so well without spoiling the fun (or heartache), but I will say that it was the blend of personalities combined with the emotional weight that was placed upon the shoulders of each of these characters. Star-Lord gets to be funny and dramatic. Drax is as hilarious in this film as he was in the first Guardians. Mantis is given great dialogue and purpose. The relationship between Iron Man and Doctor Strange is a nice change of pace from the childish Cap and Iron Man back and forth banter that we have seen so many times before. Spider-Man feels more well-rounded as a character and is much better here than he was in Homecoming. Nebula has never been as strong as a character as she is in this film. I can’t say anything about Groot or Rocket without spoiling something but let’s say they are both pretty great as well.

Did you notice that I didn’t mention anything Gamora? I didn’t mention her because while I have always loved Zoe Saldana in the role, I often felt like the character wasn’t given much to do. Yes, she’s the love interest of Star-Lord, and I love the chemistry between Saldana and Pratt, but regarding the story and character development, I always felt like the character needed more. Even in the second Guardians where they tried to build the relationship between Gamora and Nebula, I found it to be very heavy-handed and not nearly as effective as I would have hoped for. In Infinity War, Gamora is an integral part of the story, and I loved every moment of it. Her scenes with Star-Lord and Thanos are filled with such rich emotion and depth. You get to know who Gamora is and what happened in her past. Gamora’s storyline throughout the film was for me, the most effective and heart-wrenching. I felt such a connection to her character as I felt like I truly learned who she was and what she stood for. 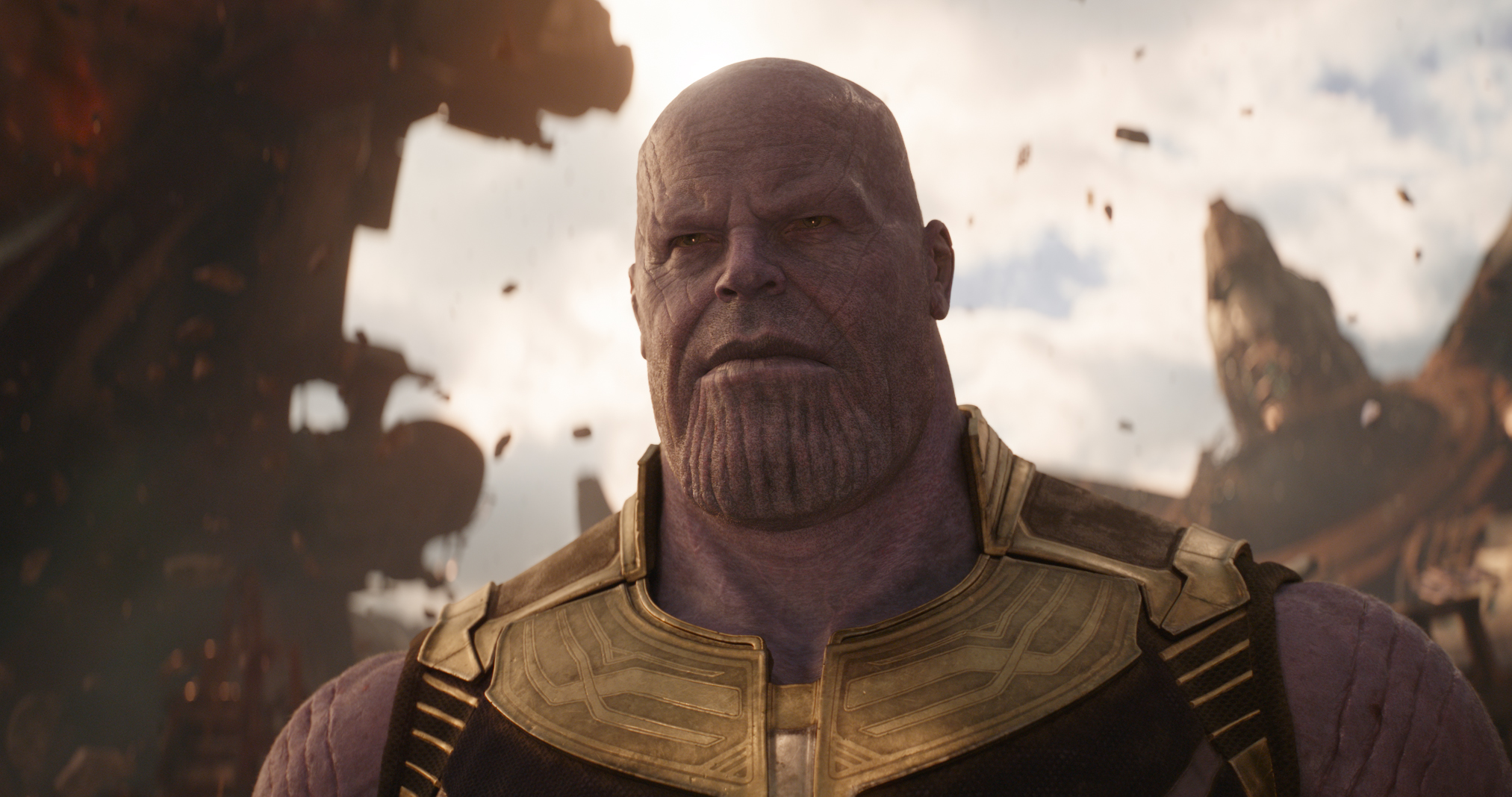 As for the villain, Thanos is probably tied with Erik Killmonger as the best villain in the MCU thus far. The character is larger than life with a history that has been hinted upon during several post-credit scenes throughout the past ten years. I found myself surprised by Thanos because I didn’t quite know what to expect from him as a character. I figured he was going to be menacing as all hell, but I didn’t expect the character to have so much emotional baggage. This made Thanos feel like such a well-rounded villain because he wasn’t just evil for the sake of being evil. He had his ideology as to how the world could be saved, and whether he is right or wrong, he had a vision (no pun intended) as to what needs to be done. As an actor, Brolin becomes Thanos and shows the audience why he is such an incredible actor. Brolin embraced the role and the material and turned it into his creation. He did such a fantastic job bringing Thanos to life.

Regarding complaints, I have a few, but they are all somewhat minor. As I said above, there are a few characters that I felt were very glossed over and didn’t get their moment in the sun. Black Widow, Captain America, Bucky, and Falcon are some of those characters. It didn’t bother me all that much, but I couldn’t help but notice the lack of their on-screen presence. I also did find some of the battles to feel a little too long and tedious after a while. Again, this is a minor complaint since I didn’t feel that way until the third act.

It feels somewhat odd to call Avengers: Infinity War an emotional roller-coaster ride, but it is. You will laugh, you will cry, and you will be entertained. For a film that was ten years in the making, it does live up to all the hype that has been surrounding it. The Russo Brothers have proven themselves worthy of creating some of the most iconic superhero films ever to grace the big screen, and I don’t think they will be leaving this Universe anytime soon. Be prepared to sweat, cry, and clench your armrest because Avengers: Infinity War is one hell of a ride.

Scott ‘Movie Man’ Menzel’s rating for Avengers: Infinity War is a 9.5 out of 10. 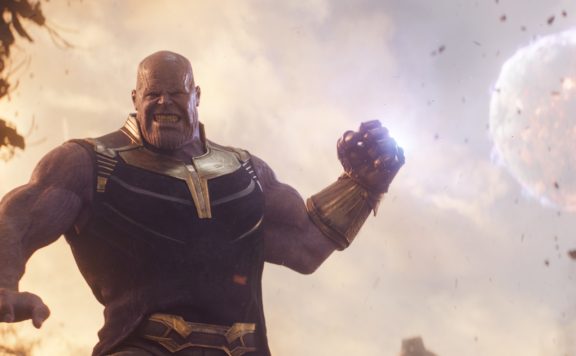 “Avengers: Infinity War” The Paragon of the Marvel Universe
April 24, 2018