You know exactly what The Northman is. It’s a revenge story — a tale as old as time, the simple plot revolving around a once future prince, exiled as a boy after his father, the King, is murdered by his uncle, who returns as a man, hardened and blood-curdling for vengeance. What sets The Northman apart from every other movie that’s ever been made with similar themes is that the plot doesn’t even matter. The Northman is writer/director Robert Eggers’ cinematic exorcism, a film meant to chill you to your marrow, haunt your dreams, clench your fist, and boil your blood. It is two hours and fifteen minutes of violent, animalistic ritual, a testosterone-fueled orgy of masculinity, a film so dark, dirty, raw, and hardcore it makes The Revenant look like Jane Austen.

In his first two films, The Witch and The Lighthouse, we were introduced to writer/director Robert Eggers’ vision, one that is dark and raw, violent and naturalistic. They were each groundbreaking cinematic experiences, demonstrating a filmmaker with a bold, visceral style that is shocking and masterful. Well, as it turns out, he was just warming up.

Who knows if The Northman is Eggers’ masterpiece, we have no idea what’s still to come from a director still so early into his career. Still, it’s hard to imagine anything more extreme or more in line with his own particular aesthetic than this film, which plays like a monumental death rattle. 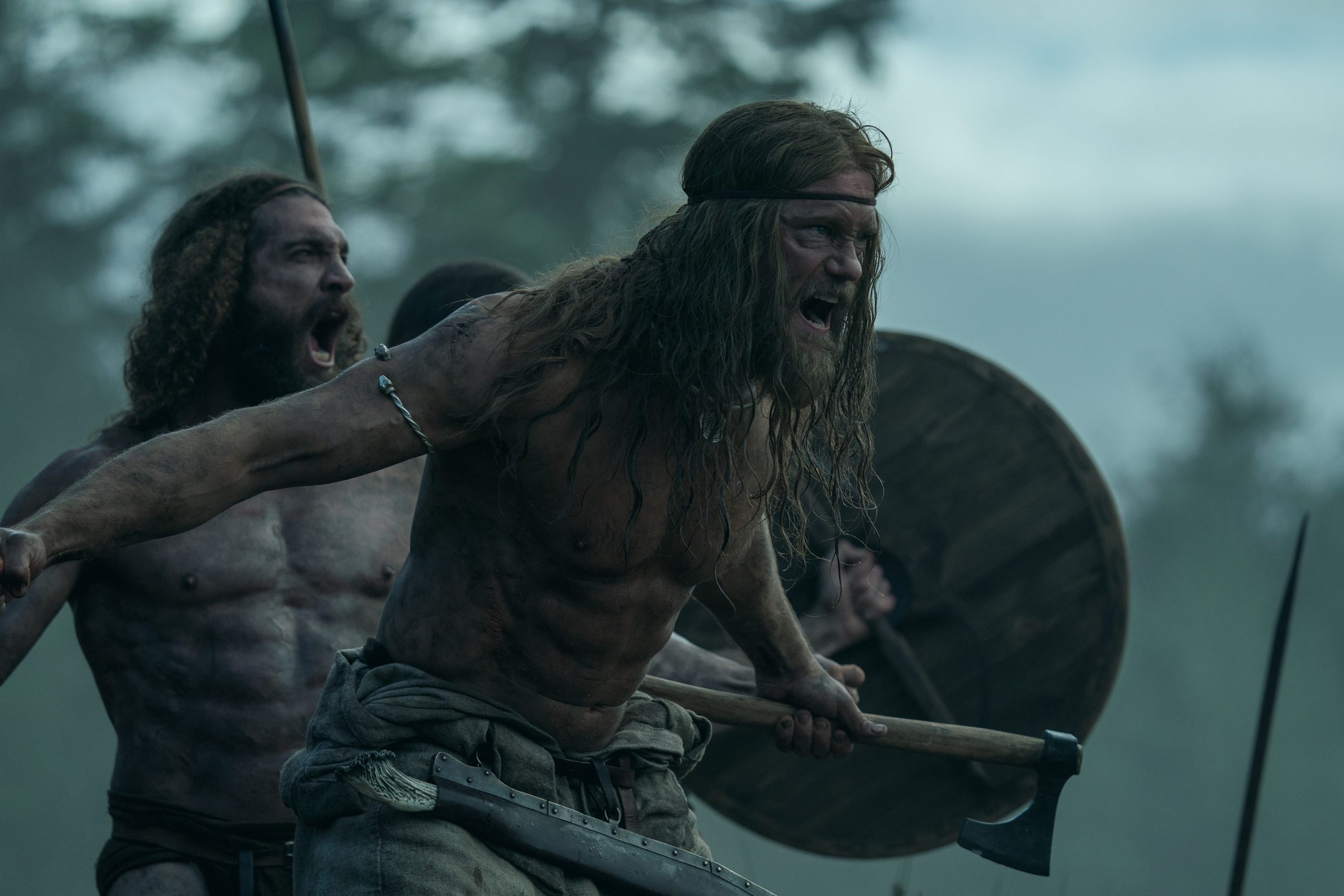 It is the year 895, and Alexander Skarsgård plays Scandinavian Prince Amleth, the exiled son of King Aurvandil War-Raven, played by Ethan Hawke, who is murdered by his ambitious brother, Fjölnir (Claes Bang). When Amleth discovers that Fjölnir had himself later been dethroned and is also exiled, Amleth travels to remote Iceland, where Fjölnir serves as chieftain over a small sheep-herding village. Amleth blends in with the new batch of slaves that Fjölnir has ordered, intent on finally following through on his life-long promise to avenge his father’s death by killing his uncle. But things get slightly complicated for Amleth when he finds out his mother, Queen Gudrún, played by Nicole Kidman, is also on the island. He also finds himself attracted to a rebellious slave, Olga of the Birch Forest, played by Anya Taylor-Joy.

The story is based on the same ancient Norse legend that inspired William Shakespeare’s Hamlet, so it’s not surprising that it is bold, violent, and larger-than-life. But Eggers, who co-wrote The Northman with Icelandic author Sjón, finds ways to even out-do Shakespeare in the twisted and vengeful department. Amleth is so driven by his thirst for vengeance that he carves his entire life out of violence. As a man, he is far from the pampered prince that he was as a child; as the adult Amleth is savage and animalistic, giving into the witchcraft and sorcery that his father first introduced him to, but Amleth has moved far from an acceptance of mythology to a whole-bodied immersion, following the guidance of witches he meets in his visions, who offer him direction as to how to fulfill his prophecy.

If it sounds like an awful lot, it is. It’s actually too much. There are so many scenes filled with half-nude men channeling their inner wolf while crawling on all fours around a giant bonfire that I thought I was at Burning Man. So much of the film is devoted to our understanding of how far Amleth has fallen down into his own rabbit hole and literally beats the drum so loudly and so often that it almost becomes comical how much testosterone is flowing through every scene. There most certainly is an audience for a film like this, which is wall-to-wall rampaging, mud-crawling, blood-drinking, savage gore, but, for the rest of us, we are just begging for a let-up in the chest-thumping and primal screaming, if for nothing else than to take a deep breath. 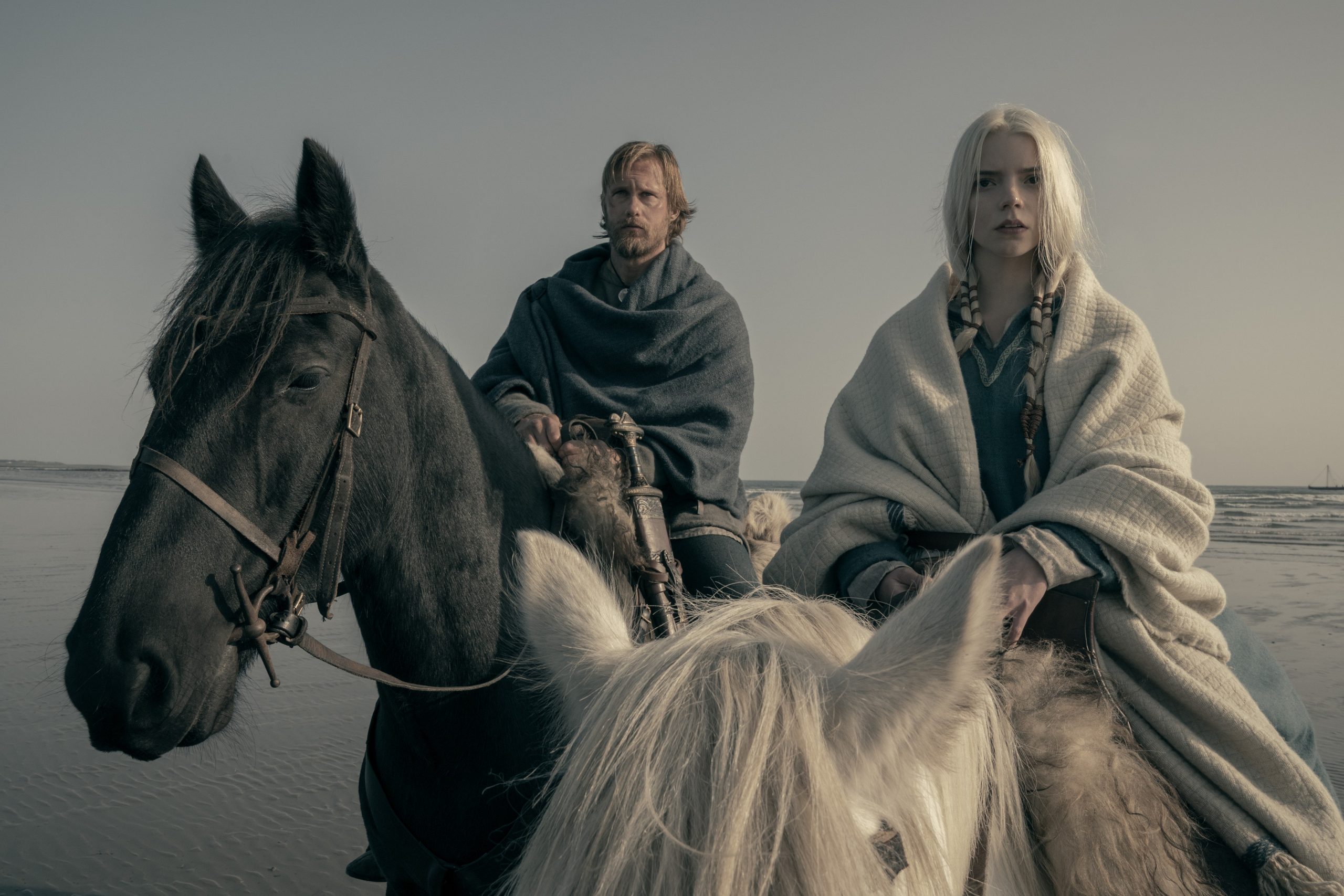 Suppose you think the presence of Kidman and Taylor-Joy softens the narrative by bringing much-needed feminine energy to the screen. In that case, the effect is the opposite, as their characters embolden Amleth’s rage, particularly Kidman’s Queen, a mother who lost her motherly instincts—and her sanity—many years earlier. Kidman is absolutely spectacular in the few scenes she has, exploding with an intensity we haven’t seen before. The casting of Kidman and Taylor-Joy is inspired. Two actresses who come off as if they are as delicate as china but, in The Northman, are each fiery and iron-strong, rebellious, and more than equal to their male counterparts. While, admittedly, Taylor-Joy’s character doesn’t serve much more of a purpose than to bring out Amleth’s long-buried humanity, she does find a way to make the most of it. The rest of the cast is excellent, especially Gustav Lindh, who plays Amleth’s menacing half-brother, Bang, whose Fjölnir is complex and strong, and Björk, who is perfectly cast as a witch who foretells Amleth’s fate.

But let’s not kid ourselves when we talk about the performance at the center of The Northman.  Skarsgård’s commitment to this role is evident in every scene, as he completely becomes this character, driven by rage, sharpened by battle, tortured by visions. It is one of the most physical and physically demanding roles you will ever see, and Skarsgård is more than up to the task, transforming entirely into his character and going to every dark place the script demands. If Leonardo DiCaprio won an Oscar for the physical demands of The Revenant, then Skarsgård deserves the same consideration. His performance is even more compelling because it’s done with very little dialogue. All of his emotions are carried on his face, in his feral screams and grunts, and in his bloodied and taut body. It is a complete dedication to his craft that does not go unnoticed. 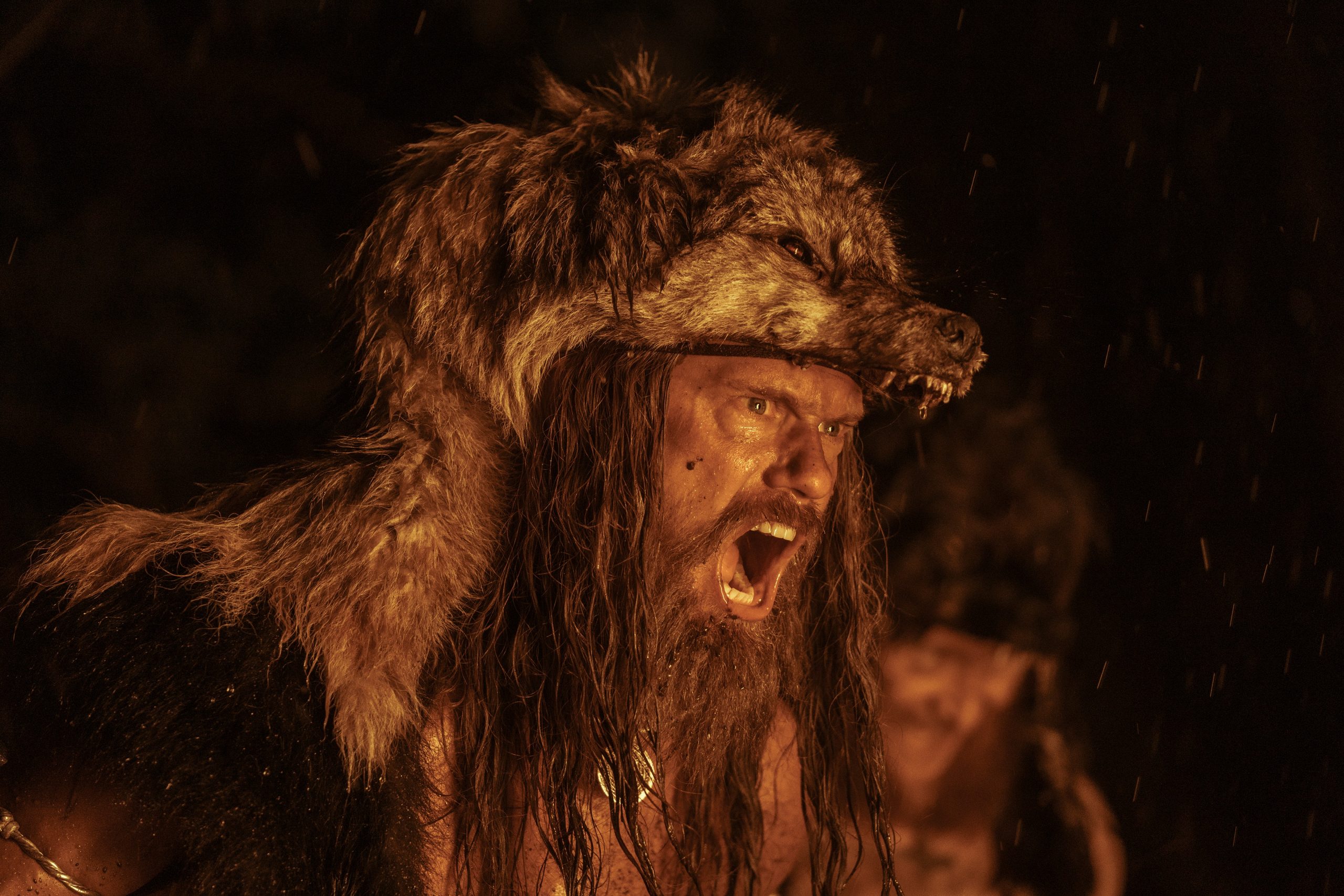 But all of this–the acting, the story, the mythology, even the absolutely gorgeous landscapes, shot entirely on location in Northern Ireland, serving as a stand-in for Iceland–is merely the appetizer to what The Northman truly feasts on. What sets The Northman apart is how it looks, sounds, and makes you feel. To say the experience is a visceral one is not doing it justice. From the beating, pounding, nerve-jangling music by Robin Carolan and Sebastian Gainsborough to the weathered and detailed costumes by Linda Muir that are so effective you can almost smell them, to the production design by Craig Lathrop and the editing by Louise Ford, every single production element is absolutely first-rate.

But it is in Eggers’ visual style, as photographed by cinematographer Jarin Blaschke, that The Northman resonates and truly stamps itself on the psyche. The film’s colors and use of light are bleakly evocative, as the manipulation of varying levels of darkness is staggering. Most of the scenes in the movie are lit only by the glow of fire, a remarkable achievement and highly effective. While there are so many memorable moments and locations, the climactic scene the whole film has been building towards delivers with ferocious and gorgeous intensity, breathtaking and jaw-dropping in its elegant brutality, making the entire journey worth it. The only way to truly experience this film the way it should be is in a movie theater, one with no ambient light and the best projection possible. The Northman is a genuine feast for the senses.

Although Robert Eggers’s filmmaking style is definitely an acquired taste and The Northman may be too heavy for some—for most, I imagine–it is absolutely impossible to dismiss the level of difficulty and the artistry at work in this film. At its most compelling, this is visceral filmmaking, and even if it doesn’t engage you, it will impress you. And if you do happen to like over-the-top, violent, testosterone-driven revenge stories with an explosive and ferocious central performance that’s just gravy. 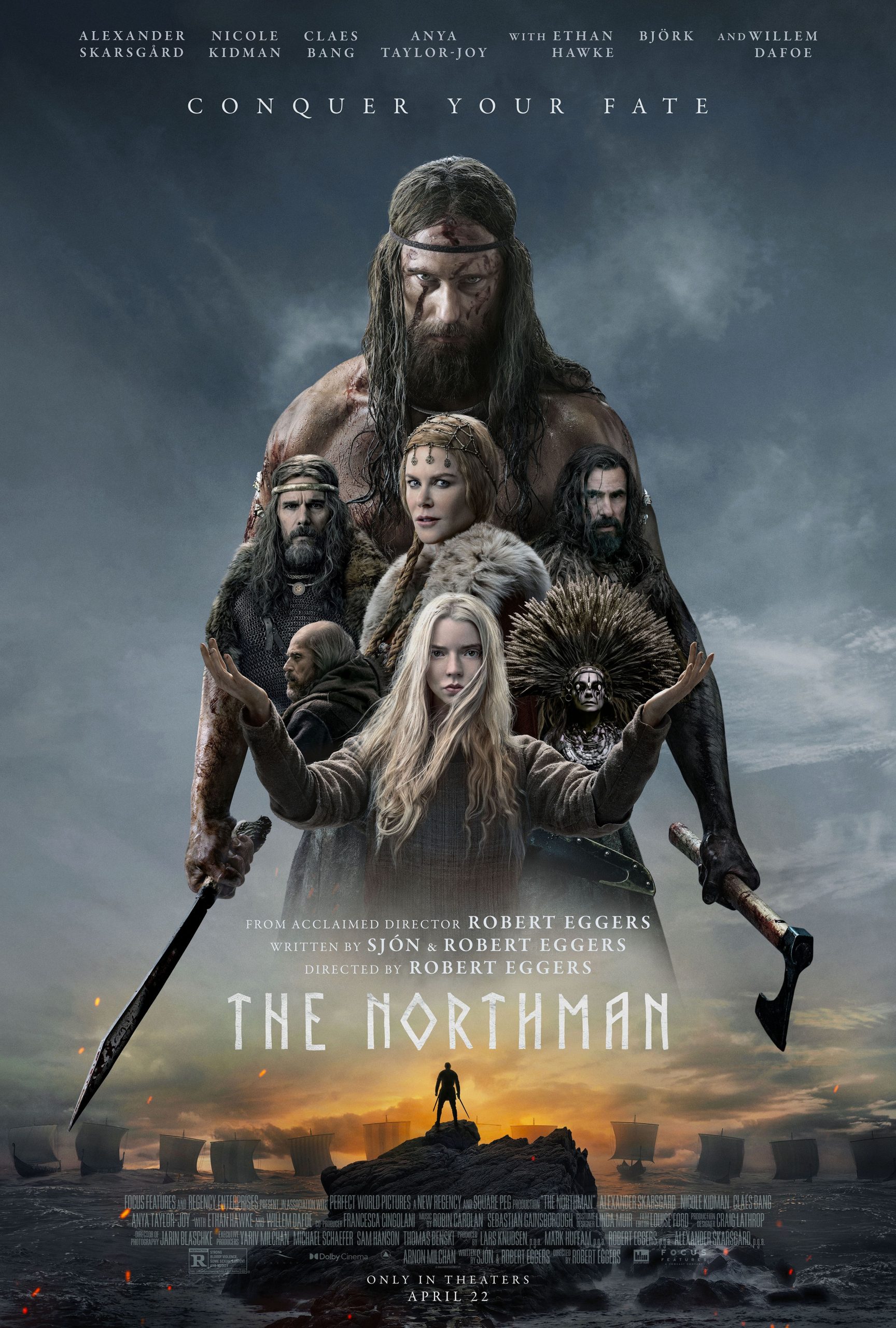 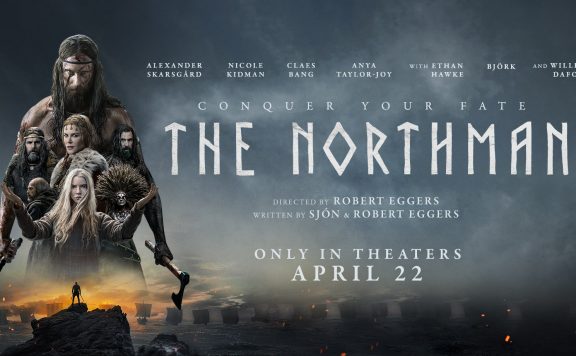