Mr. Right has the right mix of comedy, action, and romance.

One of my favorite things about going to a film festival is knowing little to nothing at all about the film I am going to see. While that formula isn’t always a winning one; it is nice to walk into something without seeing a trailer or hearing the opinions of others prior to seeing it. All I knew about Mr. Right before I walked into the theater was that it was the closing night film of TIFF 2015 and that it starred Sam Rockwell and Anna Kendrick.

Mr. Right opens on Martha (Anna Kendrick) listening to Meghan Trainor’s Dear Future Husband while taking sexy selfies to send to her boyfriend who she clearly can’t wait to see. Happy Martha quickly becomes sad Martha when her boyfriend bursts through the door making out with another woman. Feeling broken and alone, Martha and her two best friends head to the club for a night of heavy drinking. The next day, Martha heads to the store where she happens to bump into a quirky yet charasmatic Francis (Sam Rockwell). The two quickly hit it off and spend the day together. What seems like the perfect match for Martha quickly becomes worrisome as Francis is a hitman on the run.

First and foremost, Mr. Right is not for everyone. It is weird, quirky, and downright bizarre at times. With that being said, I fucking loved this film. This is one of those films that takes chances, dares to be different, and doesn’t care if everyone who sees it will “get” the joke. Mr. Right is written by Max Landis, who I have to admit, is quickly becoming one of my favorite writers in Hollywood. He takes ideas that we have seen many times before and does his own thing with them. He blurs the lines of multiple genres and creates films that star mainstream actors but are geared towards audiences that have grown tired of the same type of film.

Landis is so talented as a writer because you can tell he loves film and has been inspired by film for most of his life. Everything he has written so far seems to play homage to various genres or films while making them his own. If you look at Chronicle, it plays as a homage to coming of age films, science fiction films, and superhero films. If you watch American Ultra, it plays as a touching indie romance with Bourne type action mixed in. Mr. Right is without a doubt his most out there film but giving how clever and witty the script is; I couldn’t help but fall in love with this film.

Anna Kendrick and Sam Rockwell are a match made in heaven. They both come off as bat shit crazy yet are just so lovable. There is this amazing chemistry between the two and it only adds to the fun. As Martha, Kendrick seems to be playing a variation of her character Lisa in The Voices. She’s really bubbly and cute but you can tell that something isn’t quite right upstairs. The same could be said for Rockwell as the charming and charismatic hitman who dances as he blows people’s heads off. There is just something about seeing Sam Rockwell putting on a clown nose to kill someone while dancing around that is sheer brilliance, even if not everyone will agree with me.

I don’t really want to spoil anything about this film but there are so many great moments between Kendrick and Rockwell. These moments begin right from the start with the whole “why should I go on a date with you” conversation to the ending where Kendrick claims she’s a “T-Rex.” As previous stated, these two just play off one another so well that you can’t help but get sucked into their story and root for them to be together.

Besides the script and the two leads, director Paco Cabezas brings this whacky and crazy world to life. There are a lot of great action moments yet the romantic moments work just as well.  Cabezas is a director that I don’t really know much about but after seeing the film, I will keep my eye on him. I really liked what he did with the film from the music choices to the casting choices even smaller roles like RZA as Steve were hilarious!

All in all, Mr. Right is a film that I can easily see gaining cult status and being quoted by those who enjoy the demented mind of Max Landis. It is so refreshing to see a film that dares to be different by taking ideas that have been beaten to death and do something weird and unique with them. I cannot wait to see this film again and believe this is a great film to not only see with your significant other but with a huge group of friends as well. It’s just so much fun and is a rare film that seems like it would have a ton of rewatch value.

MovieManMenzel’s final rating for Mr. Right is a 8 out of 10. 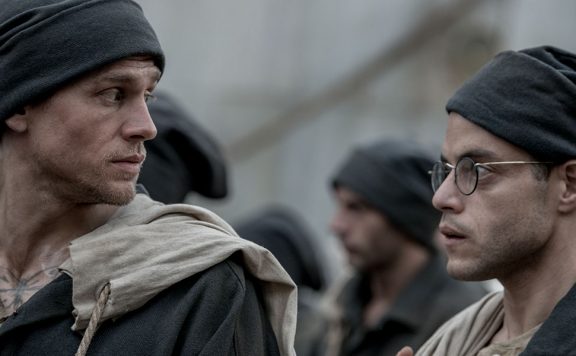 Mr. Right has the right mix of comedy, action, and romance. One of my favorite things about going to a film festival is knowing little to nothing at all about the film I am going to see. While that formula isn't always a winning one;...
0
Average User Rating
0 votes
Please sign in to rate.