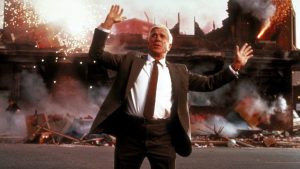 The prospect of commemorating The Naked Gun felt daunting to me. It’s so universally acknowledged as hilarious as it is. What could I possibly add to it? But it has meant so much to me I have to try.

The Zucker/Abraham’s/Zucker style of comedy is my kind of humor. Maybe it’s because I watched Airplane over and over during my formative years. So I came of age on that kind wordplay and literal comedy, but I also lament that people dismiss it as “dumb humor” because it’s working on so many intricate levels. I get it though. Most people don’t spend time analyzing why something makes them laugh. They just enjoy it. It’s my job to figure out how it works. 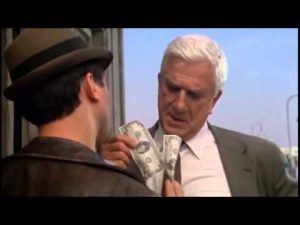 I didn’t even know all the cop movie cliches when I knew what was absurdly funny about Naked Gun. Lt. Frank Drebin (Leslie Nielsen) bribing an informant, then the informant bribing him back and ultimately borrowing from each other was clearly a break even proposition but they committed to it. The bravado of “Not one man on this force will rest for one minute until he’s behind bars” followed by “Now let’s grab a bite to eat.” I probably hadn’t seen a lot of grizzled heroes make extreme vows but I knew he’d immediately contradicted himself. Other skewered hallmarks include the absurd chalk outline floating in the water and the walking narration until he walks to the edge of town. 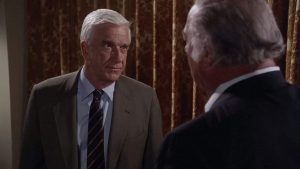 ZAZ characters are logical, but just oblivious to reality. Drebin frisks one guy but ends up reaching into Ed (George Kennedy)’s pockets and finds a gun and wallet with Ed’s wife’s picture. Ed responds to the sleight without ever questioning Drebin’s find. A bad guy throws a pillow and it actually stuns Drebin for a few seconds. The expression “slip into something more comfortable” is common in movies, but for Drebin it’s just another suit. The driving instructor teaching the teenage driver how to give someone the finger was the vital part of driver’s ed everyone wanted. 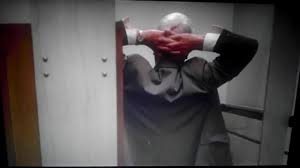 Potty humor goes to another level in The Naked Gun. When Drebin wears a live mic into the bathroom, Nielsen fully commits to the sounds broadcasting to the press, even though they were probably added in in post.

The wordplay construction of these movies probably gets me the best. Like in airplane when someone would say, “The cockpit, what is it?” and another person would define “cockpit,” and of course “Surely you can’t be serious/Don’t call me Shirley.” The Naked Gun is probably the perfection of that style. “I think we can save your husband’s arm. Where would you like it saved?” 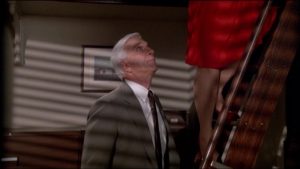 Following through on the literal meaning of the words makes it absurd. “Nice beaver” and of course it’s an actual beaver. “Can I interest you in a nightcap? No thank you, I don’t wear them.” Drebin says “Bingo” and actually finds a bingo card. 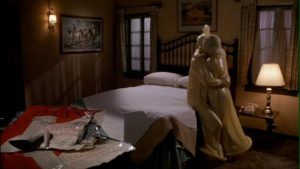 Sight Gags tell a whole story. When Nordberg (O.J. Simpson) orders a gang who way outnumbers him to throw own their guns, one guy actually does and the other six turn and look at him. You totally absorb the scolding the compliant gang member received, but it doesn’t need to be said. They invented some large props just for a single joke in The Naked Gun, like the wall that sprays graffiti taggers back and the full body condoms that Nielsen and Priscilla Presley wear. 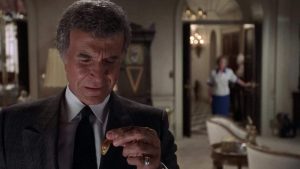 Slapstick is classic physical comedy but difficult to pull off. Nielsen once told me pratfalls are what makes him laugh and he definitely created some of the world’s best. Drebin messing around in Ludwig (Ricardo Montalban)’s fish tank in the background of an exposition scene and later setting it on fire and hanging from a penis on the ledge, Jane continuing her sexy walk after falling and bumping into things, lots of actual vehicle stunts as pratfalls, Nordberg’s elaborate assassination, his hospital bed and final injury….

The rule of threes always works but ZAZ escalate it until the third joke is exponentially more absurd. 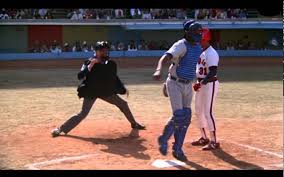 Filming an elaborate ZAZ set piece at a full baseball stadium in 1988 must’ve been something. Sure there are some crowd shots they can use stock footage but that’s still a lot of extras to direct to keep straight faces when Drebin sings the Nathonal Anthem wrong and plays the umpire frisking every player on the field and showboating for the fans. The fake baseball bloopers intercut with real ones always amused me. You go from missing a catch to getting hit by a car, mauled by a tiger or a full on decapitation!

There are so many one off jokes I don’t even know how to classify them. Showing the music video credit after the musical montage made 11-year-old Fred laugh with some meta 4th wall breaking. I once counted all the jokes in the movie and it was over 300. I wish I’d kept those notes. 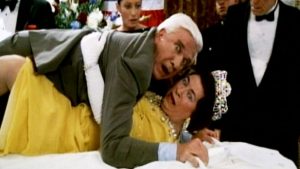 Leslie Nieslen was a treasure. His relentless deadpan is the lynchpin of this style. To be able to wipe off Gorbechov’s birthmark and look directly in camera and say a line with a straight face. His ability to tell Jane he faked every orgasm with the gravitas of an Oscar caliber performance and then look ridiculous when horns blow on his face and he tackles the Queen of England. My family always watched him together and laugh. 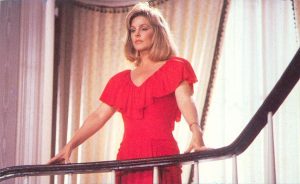 Credit to Presley, Kennedy and even Simpson for giving Nielsen equal scene partners. They occasionally get the punchlines but usually their job is to take the scene seriously while Nielsen makes it absurd and they are magnificent. Montalban too. He’s playing the villain like it’s still The Wrath Of Khan. Reactions are also important, like the exasperated mayor (Nancy Marchand). 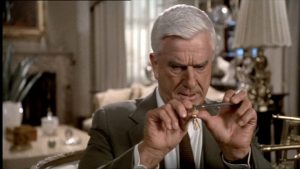 Describing how The Naked Gun works probably doesn’t do justice to how timelessly funny it is. Fortunately, it was a popular movie that spawned two sequels. Not bad for a show that was cancelled after six episode. Nielsen and David Zucker still wanted to do a Naked Gun 4 but Paramount said no. Alan Spencer even had a passing of the torch idea with Drebin training new young recruits. It could’ve been Creed/The Force Awakens ZAZ style! 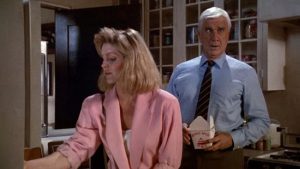 Without Nielsen, there’s really no Naked Gun but I was open to the attempt Tom Lennon and Robert Ben Garant were writing. There’s no replacing Nielsen but once he was gone it could honor his legacy. Ed Helms could’ve been deadpan. Heck, I just wish the Zuckers would make movies again. Nobody really does their style right. Abrahams did on his own with Hot Shots but then he stopped after Mafia. Zucker did a few Scary Movies but otherwise spoofs became the lazy references and impersonations that don’t stand 90 minutes, let alone the test of time. 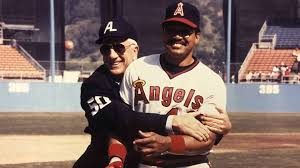 The world needs to laugh and there are plenty of genres that haven’t been properly spoofed. No one’s done a post-apocalyptic spoof or even a zombie apocalypse spoof (Shaun of the Dead is not a spoof.) Even superhero movies could use a legit satire other than the rushed Superhero Movie. I miss Leslie Nielsen and I miss the Zucker/Abrahams/Zucker team.