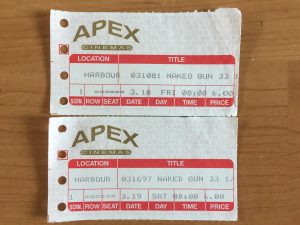 The opening of Naked Gun 33 1/3 was already a big deal to me. I was already a fan of Leslie Nielsen and Zucker/Abrahams/Zucker so I was always going to see whatever comedy they made. But 33 1/3 was so funny I went right back and saw it again the next night. I brought a different friend to share the laughter.

I never understood 33 1/3’s status as the worst Naked Gun movie. It made the least money but it also didn’t open in the summer or holidays. It’s the only one David Zucker didn’t direct but Zucker/Abraham’s/Zucker’s fingerprints are all over it. Of the three, 2 1/2 is the least memorable to me and the one I revisit the least but none of them are bad. 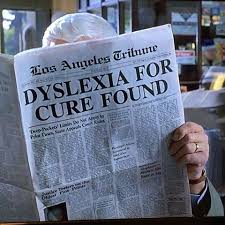 The first joke is a sight gag, a newspaper headline reading “Dyslexia For Cure Found.” They had to make that prop to do that joke. They had to print the front page of a newspaper, and probably write all the columns you can’t read, just for that headline joke. That’s making the effort.

The stock in trade of a Naked Gun movie is a long take with several background jokes. In 33 1/3 Muriel (Kathleen Freeman) visits her son Rocco (Fred Ward) in prison and passes several jokes along the way. When Frank (Nielsen) returns to Police Squad, his framed portrait uniform joins increasingly outrageous famous lawmen outfits. 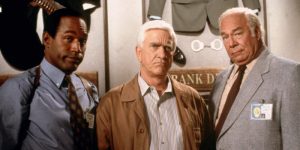 Even when it’s just one joke, the construction of visual comedy is precise. When the cops pull up to the crime scene and park so close together they can’t get out of their cars, that’s a stunt that has to be perfected to the inch. I hope they got the pole vault in the background in the first take for the vaulter’s sake. The prison riot is jam packed with activity in the frame, including background acrobatics. Peter Segal did a great job executing this style. You need only look at the rut of ____ Movies to see examples of directors who couldn’t pull it off. 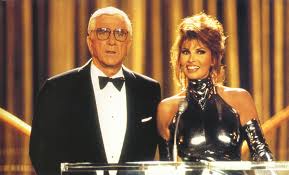 Nielsen is as deadpan and physical as ever in 33 1/3, fiddling with supermarket carts and grabbing a woman’s breasts in the melon aisle. His contributions to the Oscar dance number are on par with his made up Star Spangled Banner lyrics. His retirement speech begins, “Well, we shot a lotta people together.”

His ability to say ridiculous lines with a straight face will always be admirable to me. I wrote down a few of my favorites.

“This is not goodbye. It’s just I won’t ever see you again.”

“Jane, Jane, that name will always remind me of her.”

“I like my sex the way I play basketball: one on one and with as little dribbling as possible.”

He screams “Kill whitey” when he goes undercover in prison.

His narration is full of classic deadpan too. “Like a midget at a urinal, I was going to have to stay on my toes.” They prefer to be called little people but the pun is funny.
He also pauses the narration when a guard walks by. 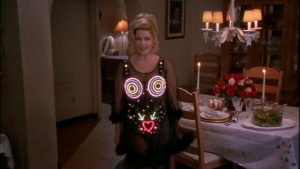 Priscilla Presley is a pro at this point too. She’s got the sass in her Thelma and Louise spoof, reverse psychologying the rapist from the honky tonk bar, and driving a truck with a steering wheel bigger than she is. 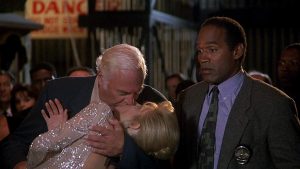 Anna Nicole Smith is cute doing this schtick, trying to seduce the Oscar accountant. Ed (George Kennedy) and Nordberg (O.J. Simpson) have less to do because Rocco is a main character. When Ed does get the big laugh, Kennedy commits as fully as ever. 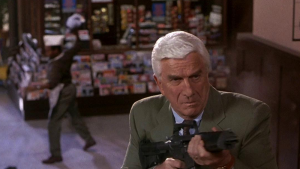 The exaggeration is relentless. The trope is Jane sees a baby and it triggers her biological clock, but in Naked Gun, every single person in a courtroom had a baby and opposing counsel is breastfeeding. The absurdity of O.J.’s Afro in the ‘70s flashback is inversely proportional to how seriously they take it (Smith’s character has not aged between the ‘70s and present day ‘90s). Even in the Untouchables spoof, it’s not just one baby carriage. It’s an absurd amount of carriages. A pan up Smith’s legs goes on longer than a normal human body with two sets of knees. 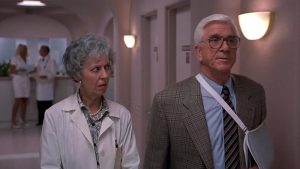 The quick turnarounds are impeccable. Frank walks into a sperm bank and comes out disheveled in a single take. Likewise, a clever edit allows Jane (Presley) to pack up and leave in a single shot.

Visual redundancy is impeccable too. An inmate (Randall “Tex” Cobb) takes off his towel in the prison shower and has another towel on underneath. It still follows the rule of threes but the third joke is what Frank is wearing. I’ve gotta wonder if the prison break gag anticipated Shawshank Redemption by reading the book. The movie came out six months after Naked Gun 33 1/3. 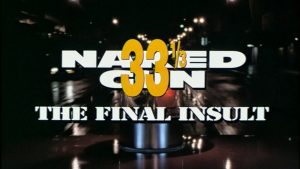 The running gags remain on point. They still find new background scenes for the squad car to drive through during the credits like a water slide or bobsled. I’m really impressed they got the rights to the Star Wars Death Star trench run. Smith lands the “Cigarette?” “Yes, I know.” bit that goes all the way back to the Police Squad TV series.

The finale of 33 1/3 at the Oscars is like the first movie’s finale at the baseball game. Back then the Oscars were still at The Shrine, and in this movie LA was still on fire from the Rodney King riots. They mock the types of movies that get nominated. I love “one woman’s triumph over a yeast infection.” I love the clip of the Mother Theresa musical. Celebrities get in on the fun, especially Pia Zadora in a dance number. They even stage gags on monitors while backstage action is going on. 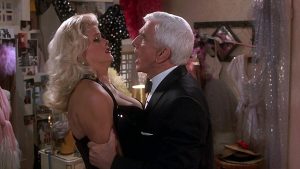 Disgruntled postal workers is a dated joke and it comes in an Untouchables spoof seven years after that movie. We probably wouldn’t joke about mass shootings anymore, but a Crying Game joke ages even worse. At least Nielsen doesn’t plunger his face like Ace Ventura does, but there’s no denying “grossed out by the prospect of sex with another man” is not a good look. It should be noted that Stephen Rea also vomited when he discovered the twist in The Crying Game, so Naked Gun 33 1/3 was exaggerating his reaction from that movie, but I agree we shouldn’t celebrate people being repulsed by gay or trans people. Had the reason been more compassionate, Nielsen throwing up into a tuba would be comedy gold. Far less screen time is devoted to it in Naked Gun than Ace Ventura so I hope it’s a small misstep in an otherwise happy movie.

Despite the title, Nielsen still wanted to make another Naked Gun. The fact that they didn’t almost disproves my theory that a final chapter always ensures another sequel, but they were developing a reboot with Ed Helms a few years ago so I think it’s only a coincidence that they slapped the word “final” in the subtitle. Maybe it was diminishing returns for Paramount but Nielsen kept working until he died, in lesser movies so they should have put his talents to use in a proper Naked Gun 4. 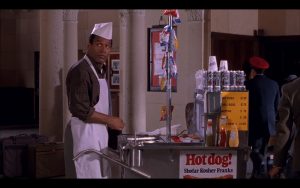 33 1/3 came out three months before the murders of Nicole Brown Simpson and Ron Goldman and O.J. Simpson fleeing in a Ford Bronco before his sensationalized trial. One could conceivably have still seen him in theaters goofing off as Nordberg in this movie while that was just beginning.

In an interview that is no longer available online for Scary Movie V, David Zucker told me he even had an idea for a Naked Gun 4 that would have begun with Nordberg coming in saying, “Frank, somebody killed my wife. I need you to help me find the real killers.” I don’t think they should have done that but I admire the balls of addressing it head on (and the assumption that Simpson probably would have done it). They certainly could have done a Naked Gun 4 without Nordberg. 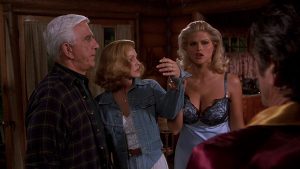 So instead, Nielsen did Dracula, Dead and Loving It, Spy Hard, Mr. Magoo, Wrongfully Accused and a whole bunch of straight to video spoofs. At least he got roles in Zucker’s Scary Movie 3 and 4. You’d think teaming up with Mel Brooks would have been gold.

I’ll always miss Nielsen and he left behind lots of movies that still make me laugh. The Zuckers and Abrahams are still around though and I would love for them to return to the slapstick spoof comedy genre. We need them now more than ever. 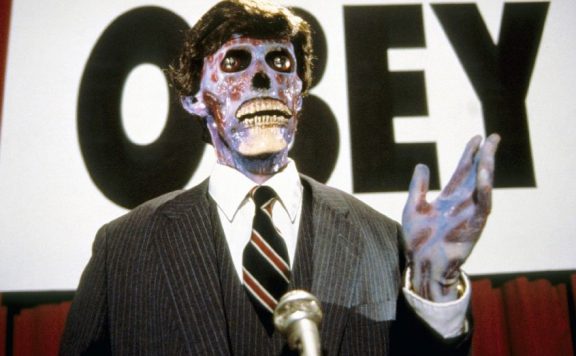