Eleven films in, and Oscar-winning director and monster enthusiast Guillermo del Toro has somehow never made a film focused on carnival folk. Nightmare Alley is a new adaptation of the 1946 novel by William Lindsay Gresham. It was previously adapted into a terrific film noir starring Tyrone Power. For 1947, that film was deemed too immoral for its time, only to receive increased praise in the years since. For Del Toro, not being one to shy away from violence and his other dark materials, did he deliver something that will similarly find higher regard in the future? That’s a tough call. As it stands, while stylish, this pulpy tale feels more the work of a man having fun than the beast ready to reap more awards.

Set in the 1940s, Bradley Cooper stars as Stanton Carlisle, a down-on-his-luck man who has seemingly run away from whatever life he’s had only to stumble upon a carnival. He’s immediately drawn into this world of unique performers held together by Willem Dafoe’s Clem, the master of ceremonies. Upon learning the skills possessed by a mentalist (David Strathairn) and his clairvoyant wife Zeena (Toni Collette), Mr. Carlisle soon finds the ambition to go from carny to The Great Stanton. However, once finding himself in a position of higher status as a showman for New York’s wealthier society members, new opponents begin to enter his path, building uncertainty for his own future.

The earlier portion of this film finds del Toro in a certain comfort level. With all the effort to introduce a geek (a carnival “creature” that bites the heads off chicken), let alone the other curious characters (Ron Perlman portrays a strong man, partnered with Mark Povinelli as “the smallest man”), it’s a wonder that frequent collaborator Doug Jones isn’t in this film. Still, there’s intrigue to be found in the way del Toro presents the carnival life, as well as an introduction to the film’s pacing. 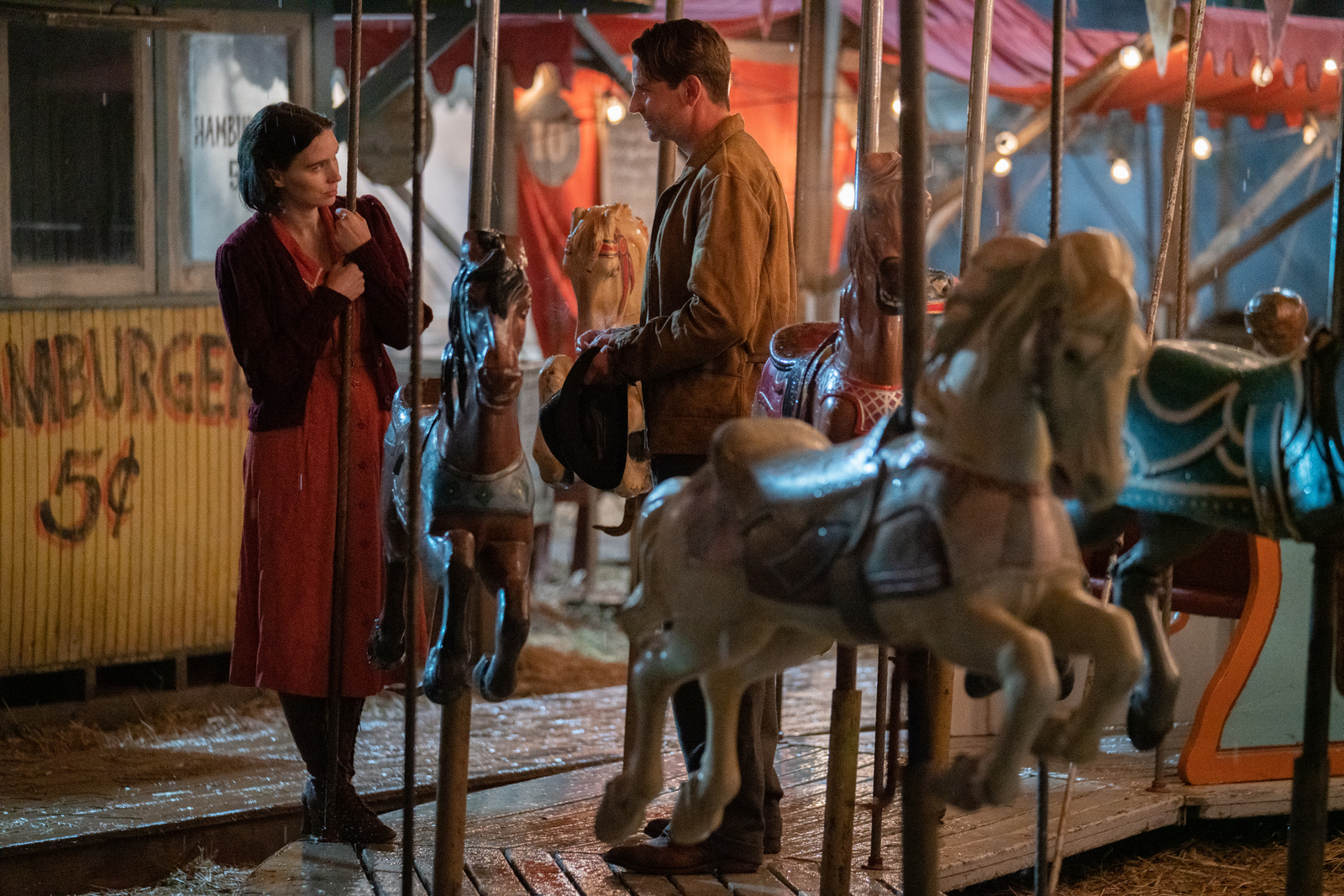 With no fantastical elements to work with, del Toro’s efforts to deliver a straight adaptation of the novel means going to some dark places with no real remedy beyond the performances and style on display. It is perhaps in the carnival that the film feels the warmest, even as it finds itself bathed in warm lighting later on. However, looks can be deceiving.

Cate Blanchett enters the film’s second half as Dr. Lilith Ritter, a psychiatrist who quickly picks up on the truth behind The Great Stanton’s act. She wants in on the hustle. Inside her office, the film is happy to emphasize its lavishness and let the lighting help ease Stan into accepting the offer of a woman as clever as he is. At this point in the story, Nightmare Alley becomes more structured, driven to push the characters into positions challenging relationships.

There’s something comforting about del Toro easing audiences into a story like this. Still, despite being more faithful to the original novel, Nightmare Alley does end up dragging its middle section out longer than needed. This would be all well and good if there was more to grasp, but for all the exquisite craftwork and attempts to increase the moodiness, the film is not as cerebral as it may think it is. 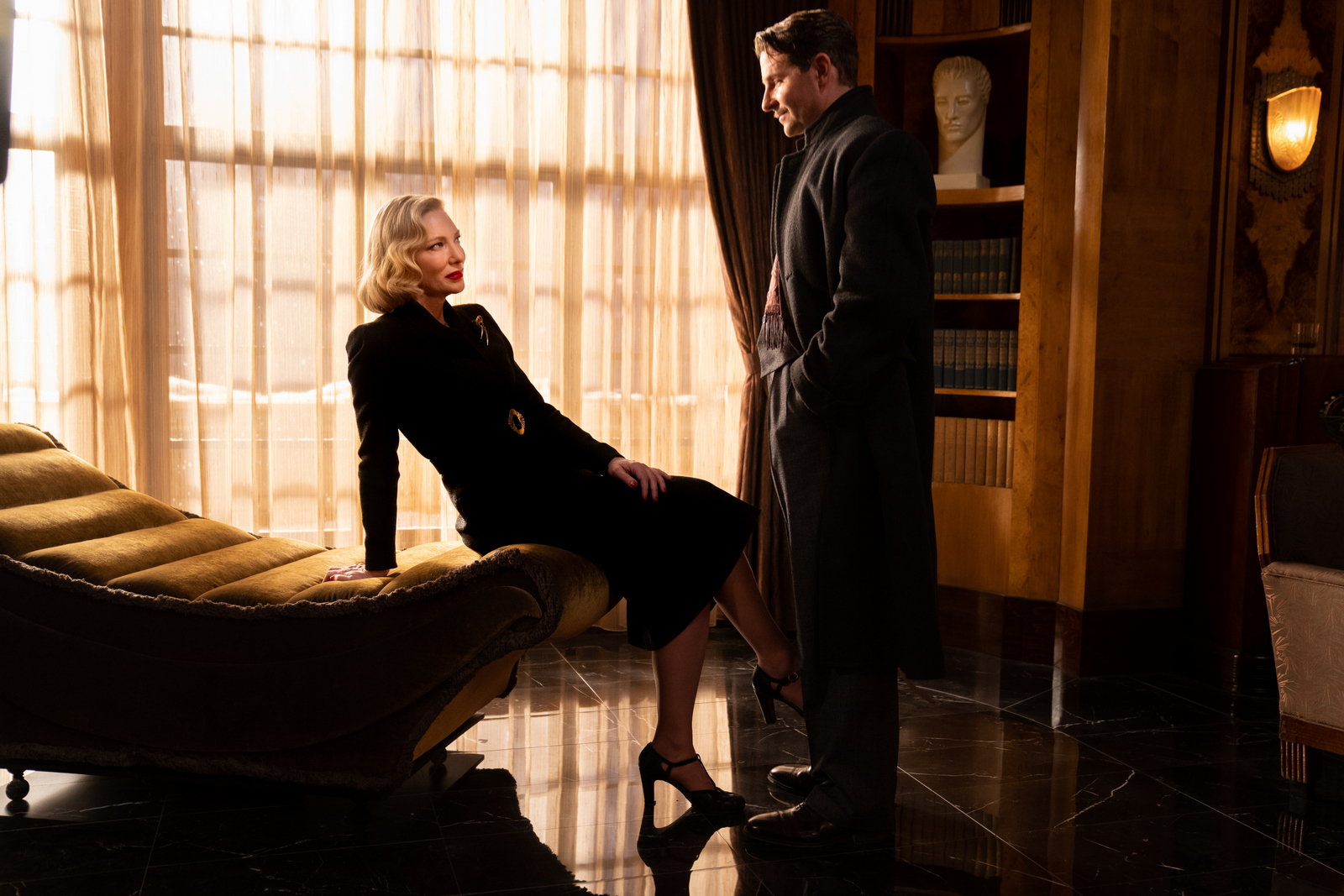 Part of the issue comes from how these performances are directed. Casting is mostly on point, as the film is loaded with many of del Toro’s regulars, along with several newcomers. However, whether or not one is familiar with the story, it feels like there’s a lack of tension stemming from how telegraphed things feel. That’s not exactly a deal-breaker for a noir, as you typically have a morally challenged protagonist, the femme fatale, an innocent, and a few tough guys to round things out. Still, the delivery ends up making the film play more as an exercise featuring great talent than an effort to push things toward a refreshing new level.

Of course, I’m also a major fan of what del Toro can bring to the screen from a technical standpoint, and Nightmare Alley is not short on impressive elements. Dan Lausten’s cinematography does plenty to grapple with specific kinds of imagery. The staging of scenes and positioning of characters to emphasize power dynamics do a lot for a movie commenting on class hierarchy. Sets feel like extensions of the characters, whether related to the eerie comfort of the carnival or the sterile environments belonging to the rich.

There is also the work from the various actors. As deliberate as some of these performances may be, del Toro’s talented players still bring out plenty to admire. Blanchett is a highlight. She does a lot to manipulate those around her, while various layers inform her character. The very welcome Strathairn and Richard Jenkins make a meal out of their limited parts. Rooney Mara is able enough to fit with this motley crew, given her role as a virtuous presence amid those who are so much worse. 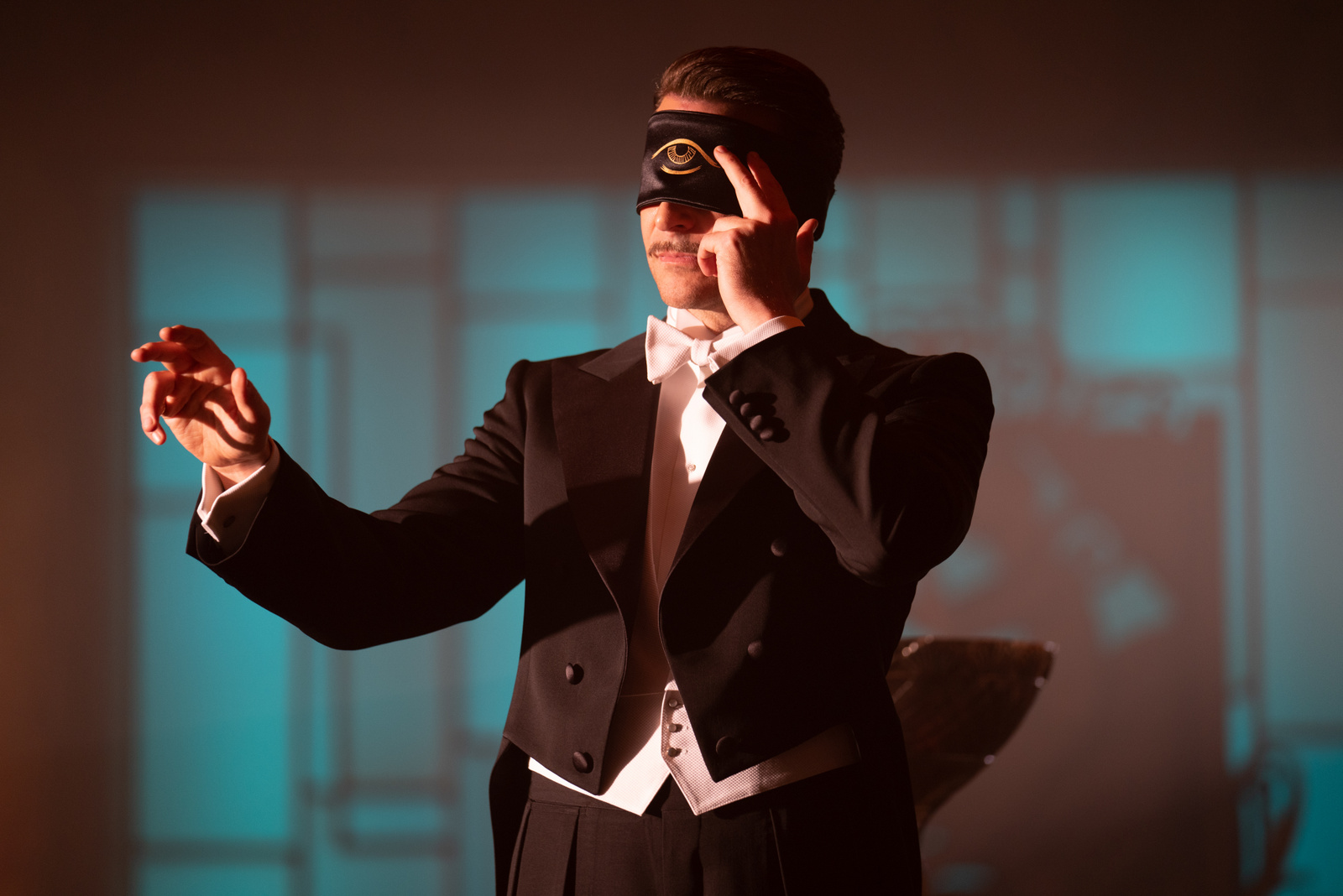 Cooper, of course, has a lot to do as the film’s lead. Credit goes to where it is due, as he works hard to convince the audience of just how far his character has fallen to operate as he does. I’m not sure he really pulls off the existential anguish needed to truly round out this character, but he holds the audience’s attention well. With that in mind, the deeper into the depths he’s forced to go down do allow him late-film moments to truly shine.

As a pulpy drama that does not hold back from matching its mood with the grotesque, Nightmare Alley feels at home with the work of del Toro. It may not operate as a dark fantasy, but it is clear the director loves the world he and co-writer Kim Morgan have created. While drawn out a bit too far, there’s a clear attempt to compose a feature that wants to find all the beauty it can in its haunting and surreal imagery. Even while grounded and matched with a sense of melancholy when it comes to its romantic dalliances, del Toro knows how to root symbolism and his sense of strange where he can. It may not amount to top tier look at the seedy lengths some with nothing to lose will go to, but it’s an enjoyably gloomy diversion. 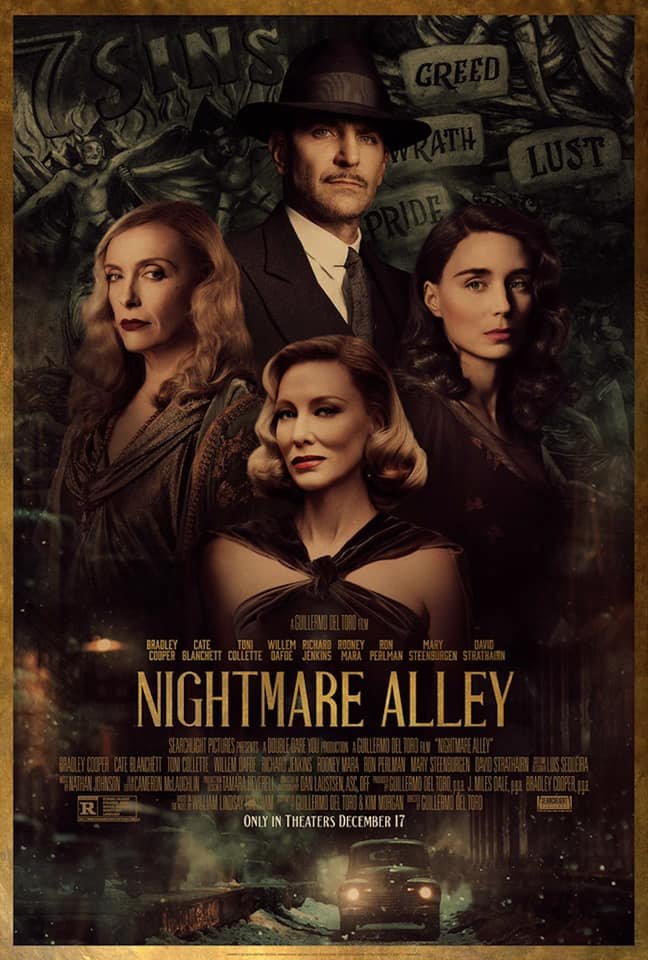 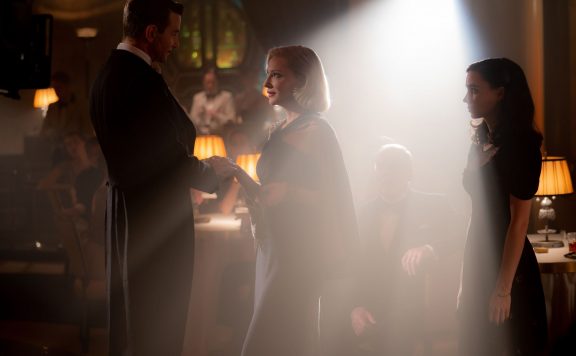 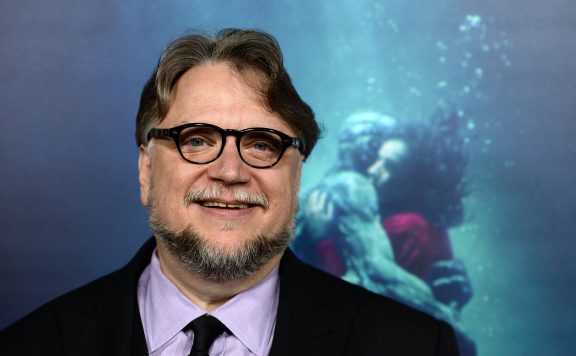 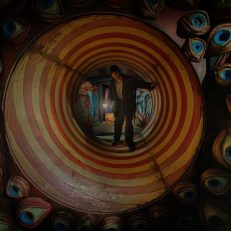 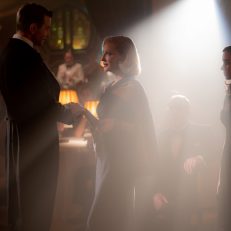 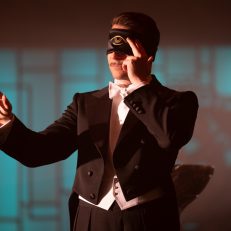 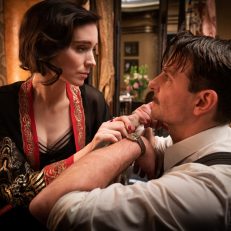 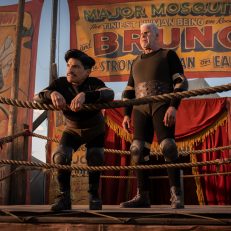 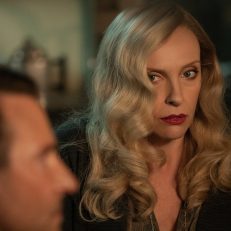 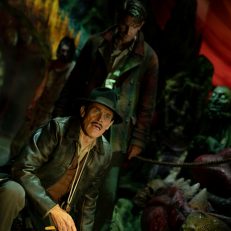 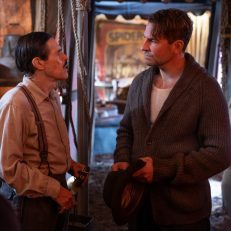