“I am going to bring floodwaters on the earth to destroy all life under the heavens, every creature that has the breath of life in it. Everything on earth will perish.”  -Genesis 6:17

You don’t have to adhere to any certain faith to enjoy Noah. This is a story, plain and simple, and in addition, it’s Darren Aronofsky’s version of a biblical tale. To portray Noah’s story and the journey of the Ark exactly as it appears in Genesis, would frankly (no offense), be a bore. Artistic license has been taken with Aronofsky’s account, and the sooner you can accept that going into the experience, the better off you will be. Though not without its flaws, Noah is biblical cinema on a grand scale the likes of which we haven’t seen since the days of Cecil B. DeMille, albeit for a new generation of moviegoers.

In Aronofsky’s Noah, we are given a brief recap of the creation of Man in God’s image, Adam and Eve’s temptation, Cain’s wickedness spreading throughout the world, and Seth’s descendants holding on to the glimmer of hope of their creators vision. On the day young Noah is to become a man, his father explains the responsibility and importance of following the path of righteousness mere moments before he is killed by the descendants of Cain. Soon Noah is a grown man with a family, battling the bleak landscape and dark visions that he believes come from the creator.

Noah is convinced that God is telling him that he will soon destroy the world, and leaves Noah instructions on how to build an Ark to save his family and the innocent creatures of the world to begin anew. The wicked will be swept away, and a new civilization, in God’s vision, will prevail. With the help of The Watchers (fallen angels), and his grandfather Methuselah’s (Anthony Hopkins) advice, Noah comes to realize that his visions are real. God provides him with a lush forest to utilize in building the ark at the base of Methuselah’s mountain, and over time, Noah’s vision comes full circle.

Along for the journey are Noah’s wife Naameh (Jennifer Connelly), his sons Shem (Douglas Booth), Ham (Logan Lerman), and Japeth (Leo McHugh Carroll), as well as his adopted daughter Ila (Emma Watson), whose family was slaughtered when she was just a child. The great Ray Winstone plays Tubal-Cain, the man who killed Noah’s father and seeks to stop him from building the Ark at all costs.

Running over two hours, Noah is a grand epic with beautiful Icelandic scenery, meticulous costume design, a sweeping score, and solid performances from a wonderful cast. If I have a complaint, and I feel it’s a legitimate one, it’s that Noah’s general tone takes a sharp turn into near Horror film territory in its final act. Without spoiling anything, it’s clear that the intentions of the tone shift were to support Noah’s great burden and obedience to his creator, but it’s a little hard to stomach and quite jarring for the viewer. I do feel that the film redeems itself in its finale, but even on second viewing, the tonal shift creates a rift in our protagonist’s character that feels more suited to a film of a different genre.

With that minor quibble aside, there is no denying that the story of Noah’s Ark remains a powerful tale, and frankly a more enjoyable one under Darren Aronofsky’s masterful direction. The sheer beauty and scale of the production is something of a rarity in Hollywood nowadays, and a welcome one at that.

If there ever was a perfect looking Blu-Ray, Noah might just be it. This presentation from Paramount Home Entertainment is nothing short of remarkable. The clarity and detail in facial features, costumes, dirt, rocks, the ark, and other visuals is at times so realistic, it’s nearly tangible for the viewer. Darren Aronofsky and company selected a purposely gritty, bleak, and muted color scheme that comes across beautifully in High Definition. In a film where the mood often changes, the visuals must reflect it, and there is an admirable balance to everything. Black levels are inky and consistent, without any crush noticeable. Daytime scenes present the lush beauty of the landscapes in perfect clarity and intensity. Yet another outstanding presentation from Paramount, and one that will likely become demo-disc material for home theater enthusiasts.

Similar in consistency to the visual presentation, this 7.1 DTS-HD Master Audio track does not disappoint. Noah has so much to offer in terms of the audio experience in nearly every act on screen: the downpour of rain, the enormity of the flood, and the sweeping beauty of the film’s score. Dialogue always comes through clean and clear, even during the epic action scenes in the film. Even the subtlety of the background sound effects (birds chirping, grass blowing in the wind) is captured with perfect clarity. This track will engulf your home theater room, and combined with the perfect visuals, it makes for a splendid audio experience.

Paramount Home Entertainment has provided fans of Noah with three short documentaries to accompany this Blu-Ray edition. Here’s a breakdown of what’s included:

As you can see from the “Unboxing” pictures below, this Blu-Ray edition from Paramount Home Entertainment features a gorgeous slipcover with the main cast from Noah against a backdrop of the Ark among the violent waves of the flood. On the reverse of the packing you’ll find a plot synopsis, a short list of special features, and technical specifications for the discs. On the inside of the packaging you’ll find a Blu-Ray disc, a DVD disc, and an Ultraviolet Digital Copy Code (not pictured). The wooden ark pictured with the Blu-Ray edition is a fantastic promotional item sent by Paramount Home Entertainment to accompany this review. There will be a few retailer exclusive editions available for Noah, including a Best Buy steelbook, a Target “Wood” slipcover edition, and a Walmart exclusive with music CD. Plenty of great editions for collectors to pick up!

Though not without its flaws, Noah is biblical cinema on a grand scale the likes of which we haven’t seen since the days of Cecil B. DeMille, albeit for a new generation of moviegoers. Noah is a grand epic with beautiful Icelandic scenery, meticulous costume design, a sweeping score, and solid performances from a wonderful cast. The Blu-Ray edition from Paramount Home Entertainment features a video transfer that is nothing short of remarkable. With stunning detail and clarity, this is bound to become a demo disc for home theater enthusiasts. The 7.1 DTS-HD track is equally as powerful, capturing the sweeping score, dialogue, and subtle sound effects with exceptional dynamic range. The special features are very in depth, featuring three separate mini-documentaries on the making of the film. Though I stand by my criticism of the tonal shift in the latter half of the film, there is no denying that Noah is a powerful film experience. 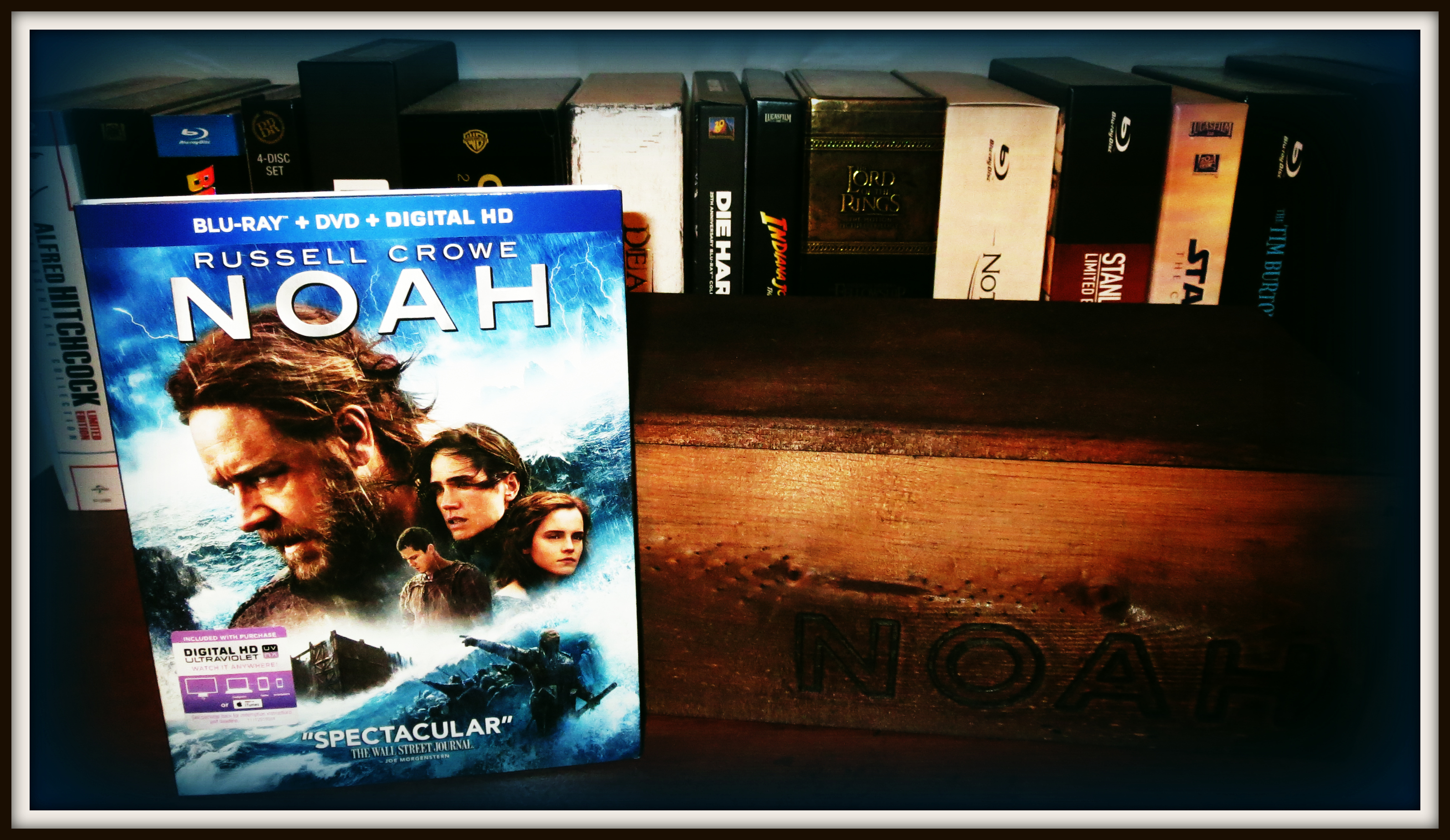