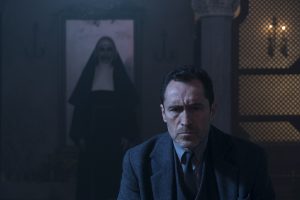 The Conjuring franchise follows an interesting formula. Each Conjuring has the Warrens face a new supernatural threat. Once they defeat it, that threat gets her own movie. In the case of Annabelle, the spinoff got its own prequel. The Nun is the origin story of the monster from The Conjuring 2, so if it’s successful it’ll have to have a sequel. 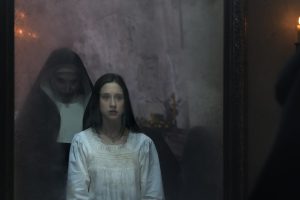 Now, I always want franchises to continue forever but I’m not sure I need every mystery of the core franchise explained in an offshoot series. Part of what made Annabelle and The Nun scary in The Conjuring was not knowing everything about them. But if we’re just talking about creating new horror franchise villains, Franchise Fred approves. Annabelle: Creation had more fun with the killer doll than its standalone predecessor so it’s all about the approach. 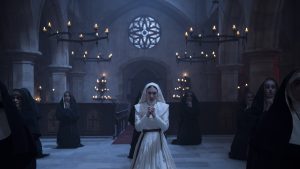 So the origin of the scary nun (Bonnie Aarons) dates back to 1952 in a remote abbey. Father Kirk (Demian Bichir) is sent to investigate the suicide of a nun, and he brings along aspiring nun Sister Irene (Taissa Farmiga). Local helper Frenchie (Jonas Bloquet) guides them to the abbey and ends up experiencing the hauntings too.

The Nun captures the isolation of this remote abbey. The epic landscapes of the trio’s journey establishes how cut off they are, and then there’s plenty of darkness and shadow within the walls. 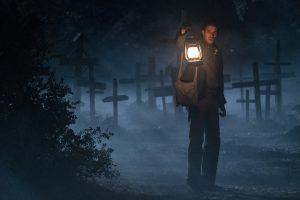 There are lots of mysterious images you want the characters to investigate, even though you know the results will be scary. The spirit is some all powerful evil that places Kirk and Irene in some insurmountable situations. There are lots of scary set pieces that build up to the reveal of The Nun we know.

So Franchise Fred is fine with The Nun. I didn’t have any burning questions about her previously, but it does the job of creating another scary scenario to thrill and entertain horror buffs until the next Conjuring is here.