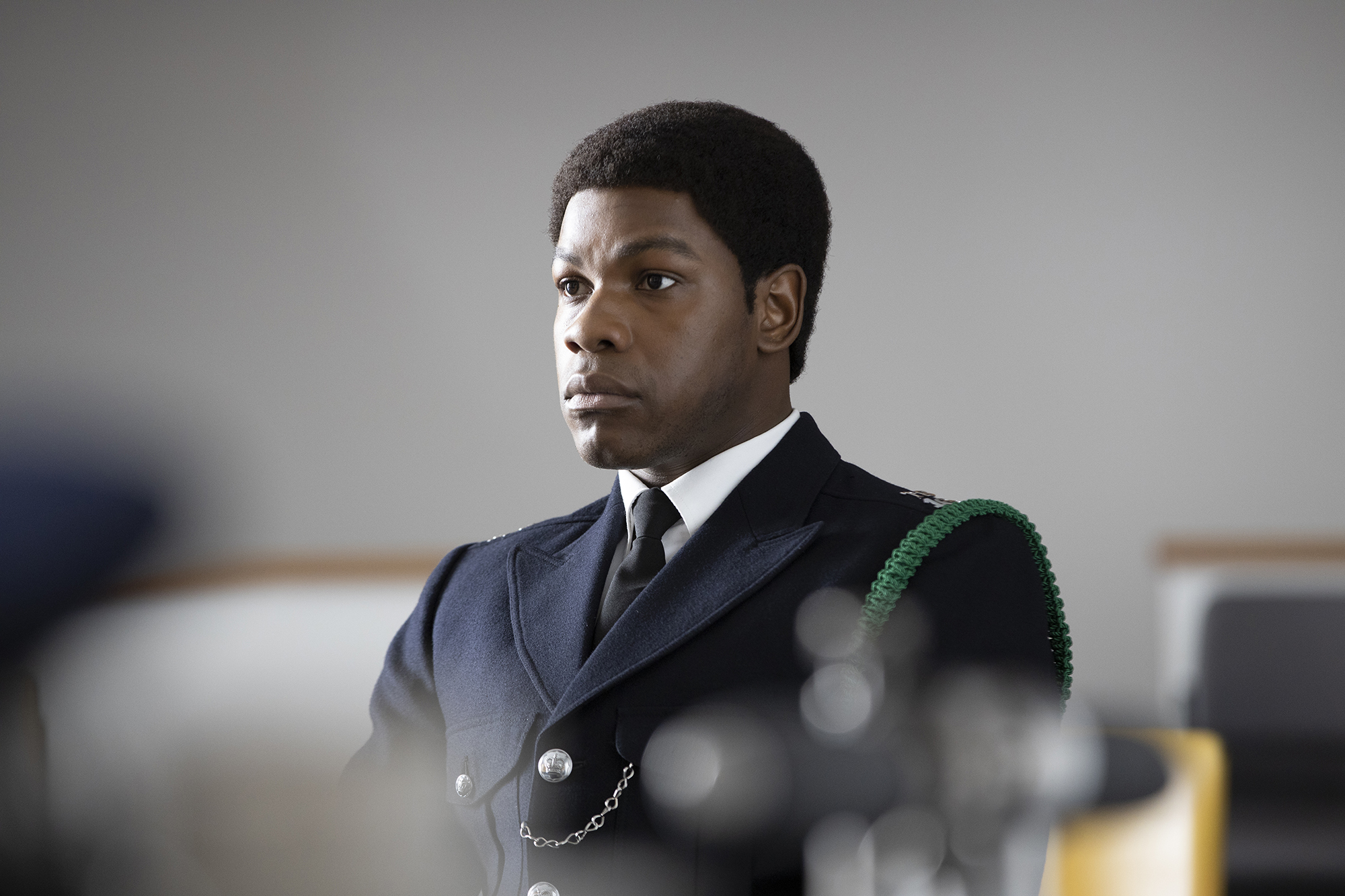 If Lovers Rock is about a culture, and Mangrove is about a movement, Red, White and Blue is about an individual. The third released film in Steve McQueen’s Small Axe anthology series about the West Indian community in London, Red, White and Blue questions a system, and whether it’s ever possible to enact positive change from within. Can a disenfranchised person help reform an inherently racist police structure by joining it, or is their mere presence a sign that they themselves are complicit?

Leroy Logan (John Boyega) is a Black man living in London, the son of Jamaican immigrants, who has been targeted by the police since he was ten years old. He makes the decision to give up his position as an academic researcher in order to join the London police force, thinking that if there are more Black men in the police department, they will be able to slowly change its racist practices and beliefs. This, it seems, is hopelessly naive, and Leroy is ill-prepared for the repercussions.

First, he makes the mistake of thinking that knowing a Black man will change the hearts and minds of white police officers. But their hatred of him and his community goes well beyond personal bigotry: it speaks to the baked-in us against them mentality that plagues police departments in general and is as much a part of the institution as uniforms, badges, and nightsticks. But as much as he initially fails to understand how pervasive this openly racist attitude is amongst his colleagues, and how little it is changed by his performance as a model officer, he’s equally unprepared for the reaction from his own friends and family. In his mind, becoming a police officer was a decision based solely on a desire to protect his community, to make the streets safer for them, and slowly build trust between the people and the department that would improve relations on both sides. But aside from a few staunch supporters, they see him as a traitor. Someone willing to sell out their own people for a bit of power and influence. Someone not to be trusted. Even his own father can barely look him in the eye, and local teenagers call him Judas on the street.

In some ways, Red, White, and Blue is a less cinematically ambitious film than McQueen’s other outings in the Small Axe series. It lacks the lyricism of Lovers Rock and the raw energy of Mangrove. But in a contemplative, non-judgmental exploration of one man’s struggle to do right by his community, it’s equally compelling. Since bagging a leading role in Star Wars, John Boyega has rarely found opportunities to work on films that fully utilize his talent and magnetism. But here, he is striking, his charm and righteous indignation in some ways reminiscent of Denzel Washington in his more fiery roles as a young actor.

What he captures so well in Red, White and Blue is the uncertainty and frustration of trying to bridge two worlds and to be seen as an accomplice of the enemy in both. How long can you survive being ostracized by your own community, feeling as though your very uniform is a tacit endorsement of all the pain inflicted on Black people by the police? And how long can you tolerate working within a blatantly racist system, even if you are attempting to reform it, when your colleagues insult you to your face and knowingly endanger you by refusing to provide backup?

There are no easy answers to this, and Red, White, and Blue doesn’t try to pretend that there are. Like so many other race-related issues, it’s complicated and steeped in historical trauma. Only a man knows what he’s willing to put up with, and that’s a decision he has to make anew every single day. Red, White, and Blue may not be flashy, and it certainly doesn’t have a pat, inspirational ending that preaches of love and understanding. But it’s honest, more so than most films that try to tackle issues like this where audiences want so badly for there to be answers instead of just more questions. And most importantly, it opens up a new conversation, without which any progress is impossible.