Peter Rabbit holds a very special and nostalgic place in many people’s hearts and garnered a lot of excitement even from adults to see a favorite character come to life on the big screen. In Sony Animation’s Peter Rabbit, James Corden voices Peter, a rambunctious and mischievous little rabbit looking to take care of his sisters and cousin while they try to live their lives in the country. Hellbent on stopping them from destroying his garden, Mr. McGregor chases them down and tries to kill them. While this is a children’s film, there are some really dark moments like when Peter’s father is eaten in a pie and when Mr. McGregor suddenly drops dead.

Once Mr. McGregor is gone, the animals rejoice and stake a claim to his property, garden included. Life seems good for the animals, they had McGregor gone and their lovely Bea (Rose Byrne) to love and care for them. All this comes to a complete halt when Thomas (Domhnall Gleeson) comes to Windermere. Just as mean-spirited and with as much disdain for the animals as his late uncle, he works hard to rid the property of the animals and work his way into Bea’s heart. Peter will not stand for this and wages war on Thomas.

The animation in the film was really well done. I appreciate that the creators incorporated the original illustrations that we associate with Peter Rabbit into the film. They were a beautiful touch that reminded the adults in the audience what they loved about this character and growing up with these stories.  They created a beautiful and idyllic Windermere for our story to take place and offered a reprieve from the craziness of the outside world.

While the film is cute and entertaining, it doesn’t make a lasting impression. It feels rather generic and that the jokes are recycled within the film far too many times. I really do love James Corden but I believe casting him in this was a misstep because his voice is so recognizable that all I could see was him and therefore couldn’t feel truly invested in the film.

Another issue is that we are supposed to sympathize with and love the animals but I struggled with it. The animals all seemed to over the top and as a result, made me feel less invested in their storyline. However, this is a children’s film and a lot of the children in the theater couldn’t stop laughing and were having a great time, so that’s what is really important. I will admit that the rooster character was hilarious and I laughed pretty hard everytime he showed up in the film.

While I didn’t quite sympathize or love the majority of the animal characters, I gravitated towards the human characters. Rose Byrne and Domhnall Gleeson are charming together and have terrific chemistry on-screen. Gleeson is one of my favorite actors and I was impressed by how hilarious he was in this film. I never saw this comedic side of Gleeson before but his comedic timing to be spot on.

While Peter Rabbit isn’t a groundbreaking revelation in family entertainment, it is a cute and whimsical little film with a few darker elements. It will bring smiles to the faces of its viewers and remind adults of a simpler time. Peter Rabbit is the perfect spring film to bring the family together and appreciate the smaller things in life. 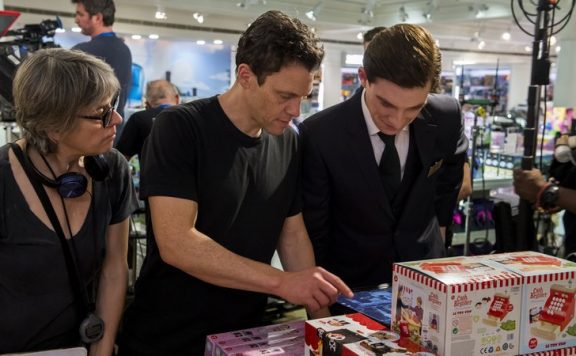 Will Gluck on Peter Rabbit, working with Emma Stone, and his relationship with Sony Pictures
February 9, 2018