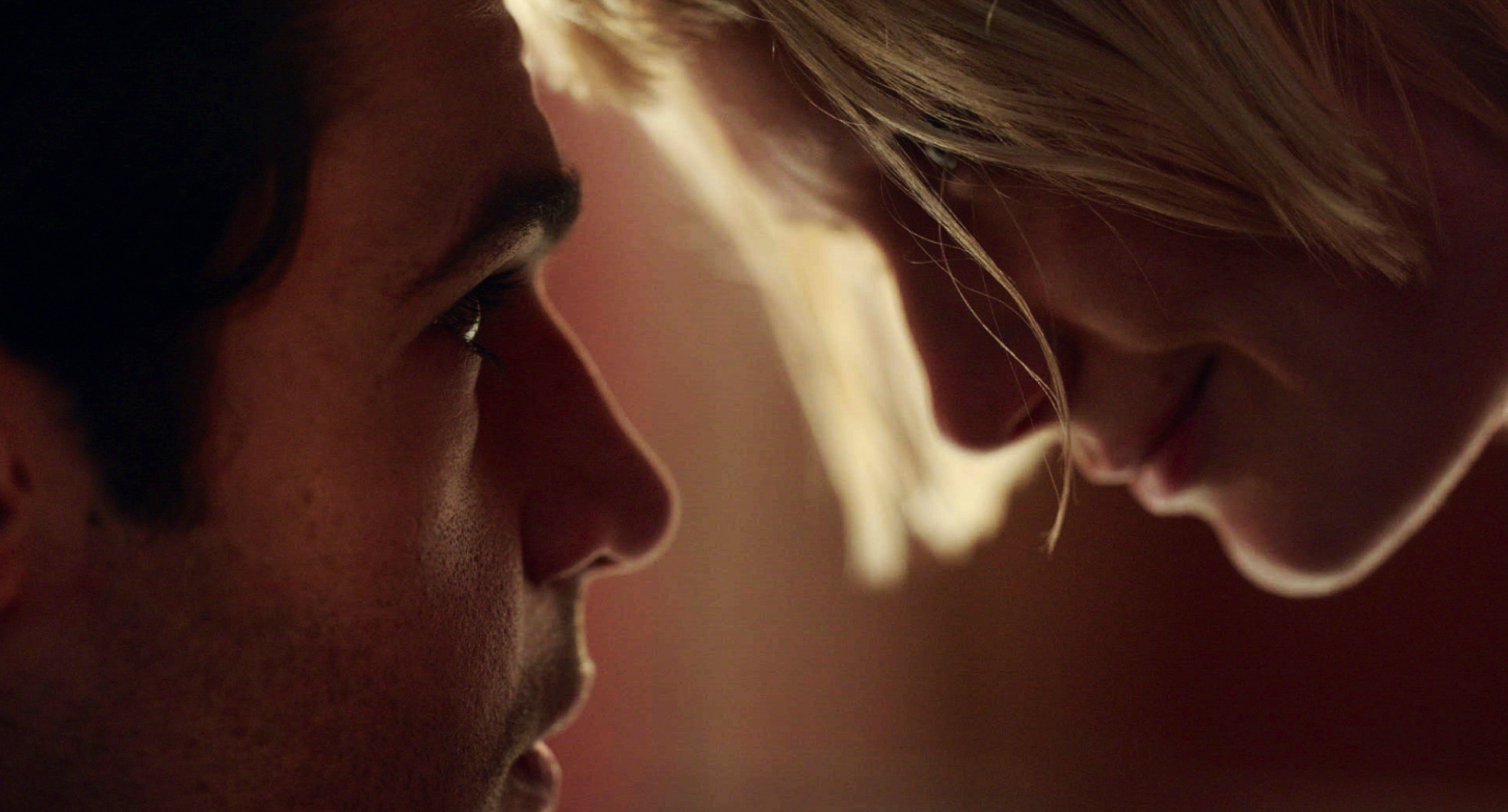 Piercing starts off with a classic vintage “feature presentation” announcement in a groovy font, then segues into an old-school Giallo-style opening, showing us a mysterious man in a sleek car as the opening credits scroll over the action. The music is a jazzy throwback, and the picture pays grainy tribute to the days of film. But what follows is not the expected grindhouse homage—Piercing is far too polished and practiced for that.

The man in the car is Reed (Christopher Abbott, It Comes at Night), and he’s going on a business trip. Before he left, he kissed his picture-perfect wife (Laia Costa, Life Itself) and adorable baby son goodbye, took his overnight bag, and walked out the door. Inside the bag are the expected clothes, toothbrush, shaking kit, and… a murder kit, complete with Reed’s own handwritten instructions on how to kill an unsuspecting prostitute.

Once he’s checked into his swanky room, he calls an escort service and orders the girl of his nightmares. Jackie (Mia Wasikowska, Crimson Peak) is an alluring blonde who is willing to do whatever he wants. In fact, she gets so into his fantasy that she starts to stab herself with his icepick. Wait a minute. What? Reed is understandably puzzled but intrigued (and turned on) as well. So, he takes the bait and follows Jackie’s pert derriere down into a darker, far more twisted rabbit hole than he could ever have envisioned. 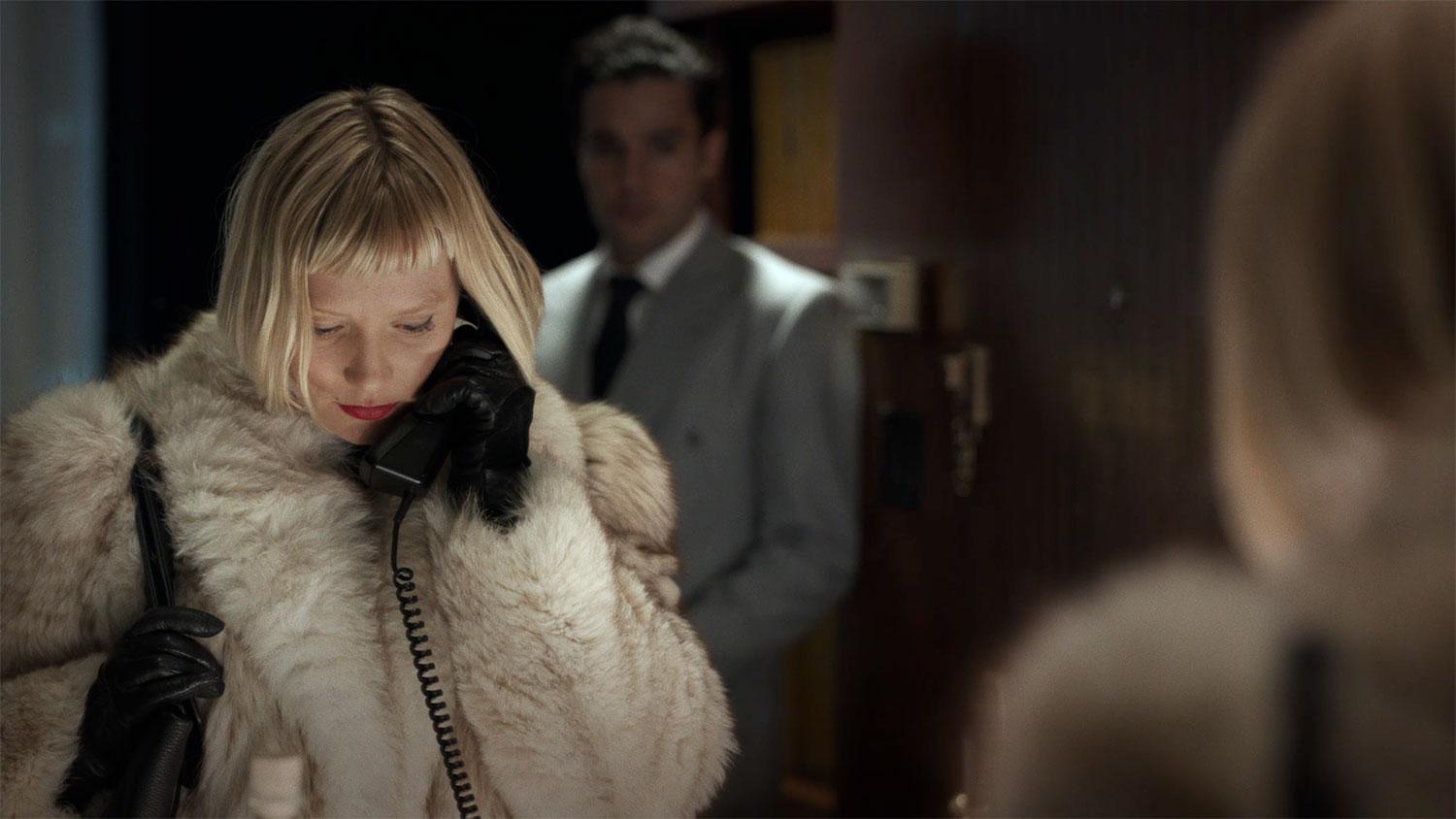 Piercing is a quirky and nasty black comedy, essentially a two-hander—so if you don’t mind spending an hour and twenty minutes with a deranged duo doing their twisted tango, then, by all means, tune in. There are some inspired, spine-stiffening moments, even when no one is actually being hurt. In one early moment, Reed poises the point of his icepick just above his baby’s fussy face as the infant wails. In another, he takes a dry run at his choreographed routine, miming the murder he so looks forward to.

The film is carefully crafted—from its commanding performances by Abbott and Wasikowska as they take turns between S&M, to the clever manipulation of just the right songs to fit the moods—but it seems someone forgot to add an ending. Whether this is the fault of the 1994 Ryû Murakami novel upon which Piercing is based or writer-director Nicolas Pesce, I’m not sure. Still, the pedigrees of both sources are solid. Murakami wrote Audition, which was later infamously adapted by Japanese auteur and shock-peddler Takashi Miike. Pesce wrote and directed the unforgettable 2016 indie-horror, The Eyes of Mother. By the same token, you’d think the result would be more than just a little unsettling, given the players.

When all is said, done, and stabbed, Piercing feels like the love child of David Cronenberg and Andrzej Żuławski, with E. L. James as their surrogate.