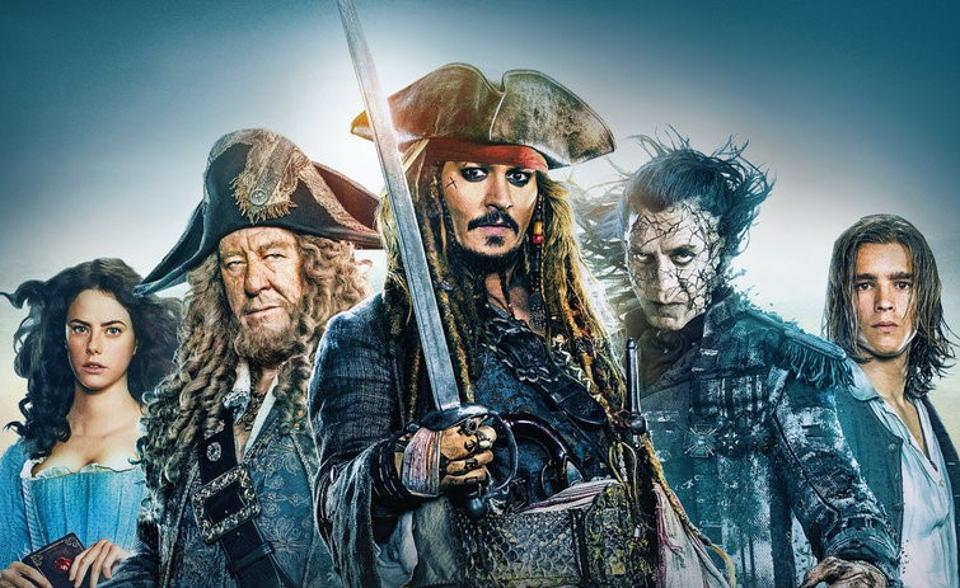 Blockbusters are the reason why the majority of moviegoers flock to cinemas. Hollywood knows this which is why every summer is filled with big-budget films that feature stunning special effects, a well-known cast, and most importantly, are entertaining and fun. For the past several years now, the summer blockbuster season has been filled with superhero films and remakes but there hasn’t been a new Pirates of the Carribean since On Stranger Tides landed in theaters back in 2011.

The absence of this sort of action comedy adventure is something that I personally missed seeing on the big screen. Critics often complain that blockbuster films don’t feel fresh and original anymore. While I wouldn’t say this is always true, I do feel like the majority of summer movies especially, over the past couple of years, do feel like more of the same. With that being said, I always found it interesting that there hasn’t been another franchise quite like the Pirates of the Carribean. The original film which was released in 2003 surprised critics and audiences alike but studios oddly enough never tried to make other films like it.

Dead Men Tell No Tales is the fifth entry in this franchise and tells the story of Henry Turner (Brenton Thwaites) as he attempts to track down the legendary Captain Jack Sparrow. Henry must find Jack Sparrow because he believes that Jack is the only one that can lead him to the Trident of Poseidon. As Henry and Jack embark on their journey, they meet a young female astronomer Carina Smyth (Kaya Scodelario), who agrees to assist them in their endeavor. Problems soon arise when Captain Salazar (Javier Bardem) escapes from the Devil’s triangle and begins to seek his revenge on Captain Jack. 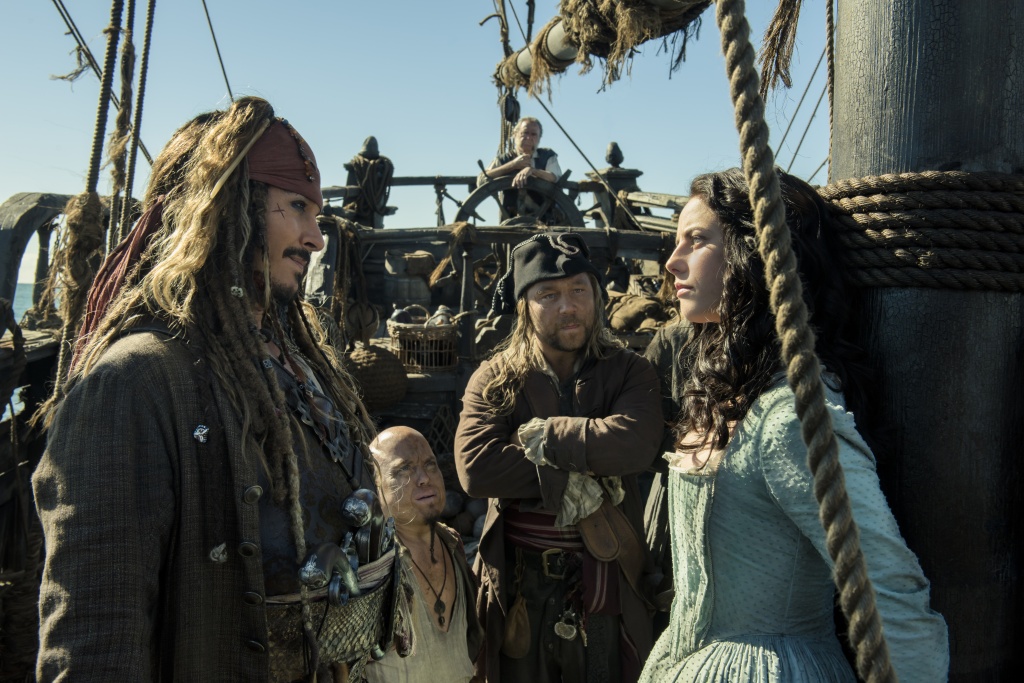 Screenwriter Jeff Nathanson must have really studied the previous films prior to writing this one. Dead Men Tell No Tales goes back to the original film and seemed to have studied all the elements that made it such a huge success. Despite returning to its roots, this fifth entry doesn’t feel like a copy of the other films but rather a whole new adventure that sets up what will hopefully become a new set of stories. Dead Men Tell No Tales is easily the best Pirates adventure since the original and I think the reason for that is because the film has a perfect balance of action, comedy, and adventure.

Dead Men Tell No Tales is the type of film that you should avoid all spoilers prior to seeing. There are so many great surprises in this film that I think it would be a shame if they were ruined for you prior to seeing the film. If you are a fan of the previous entries, you will get some much-needed backstory on several of the franchise’s most memorable characters including Barbossa and Jack Sparrow. There is plenty of adventure in this one as well as comedy. There is a great scene where Jack and Carina get in a bit of trouble. Carina is about to be hung while Jack is about to be beheaded by a guillotine. The way that this scene plays out is magical because it combines humor and action so perfectly. It is definitely one of the best moments in any of the films in the franchise thus far.

As always, the film is filled with a wide array of characters and at the helm is the always lovable Captain Jack Sparrow. Johnny Depp has created a character that has become part of cinema history. Jack Sparrow is a zany yet charming pirate that never seems to learn anything from any of his mistakes or shortcomings. While some may argue that the lack of character growth is a bad thing, I would beg to differ. For a pirate who clearly as a drinking problem, I think Depp embraces the material and handles the character’s actions with such perfection. Depp knows when Jack is being a cocky jerk but yet always manages to make him relatable and likable to the audience. Jack Sparrow is without question the biggest draw of this franchise and I think that remains true with this one, even though I will admit that the majority of the supporting cast this time around holds their own and the film feels well-rounded especially in the character department. 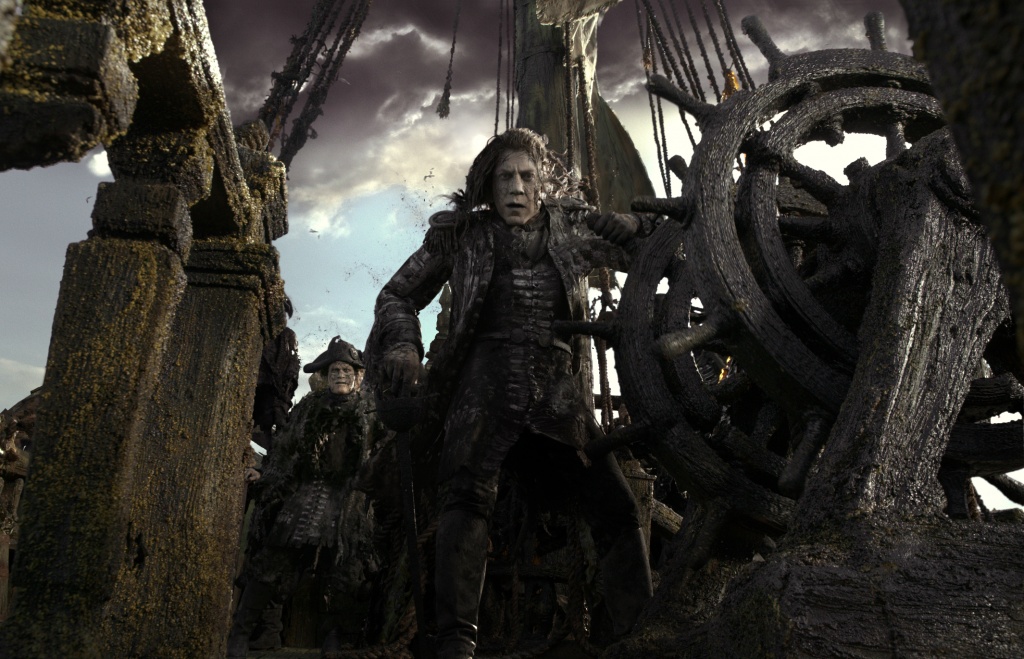 The newcomers to this entry help provide depth to the characters that we have grown to love from the previous entries. Brenton Thwaites looks and feels the part. He is great at playing Will Turner’s son, Henry and brings his all to this role. He is given a real story arc as well as enough backstory that it makes it easy for viewers to become invested in his story. Alongside Thwaites is Kaya Scodelario‘s Carina, who I believe is easily the strongest and best female character in the franchise to date. Scodelario’s Carina is headstrong and smart. Her character is well-rounded and the story shapes this character to become a leader rather than a sidekick. I think it’s so impressive that so few talk about how culturally diverse these films are especially this entry which not only features a smart and well-developed female lead as well as a Spanish villain.

This brings me to Javier Bardem who once again makes an awesome villain. Between his performance in No Country for Old Men and Skyfall, I think many would agree that Bardem is great at playing the bad guy. His portrayal of Captain Salazar is nothing short of brilliant. Bardem’s Salazar is creepy and menacing and with the help of the visual effects team, he has become one of the best Pirates villains of all time. It is also important to note that the way Salazar is written gives him a real reason for his anger. I feel like so many films feature bad guys that lack depth but that isn’t the case here. There is a cohesive storyline that shapes this character and therefore makes it easy for audiences to understand why he is so filled with anger and rage.

Geoffrey Rush‘s Barbossa doesn’t get as much screentime this time around but the time he is on-screen is also some of the best moments of the film. Rush is such a gifted actor that each time he plays this role, he brings something new to the character which also I feel offsets Depp’s Sparrow who never changes. Rush’s scenes are loaded with depth and you can see that he really has a strong love for playing this character. His scenes are well-acted and are filled with both humor and heart. 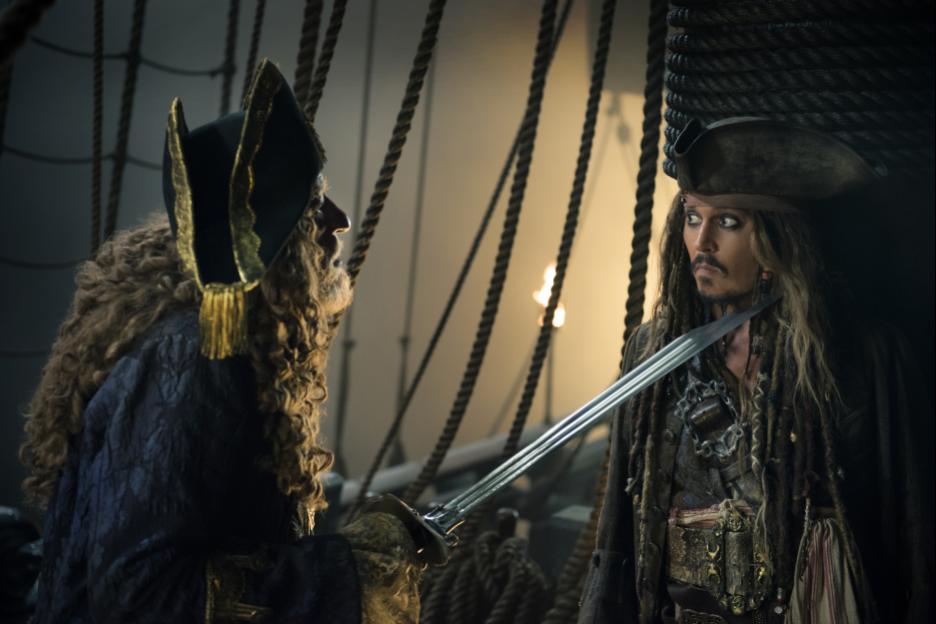 Another standout factor about this entry is how surprising and emotional certain scenes in the film are. I can’t go into too much detail without spoiling it but I will say that something is revealed in the second act and it plays out into the third act. The way this was handled was extremely effective, shocking, and loaded with emotion. This scene, along with several others, also had the element of surprise which allowed for plenty of conversation to take place after the film ended. It’s the first time in a while that I remember walking out of a big budget blockbuster saying “I didn’t see that coming.” That in itself was pretty refreshing, to say the least.

Directors Joachim Rønning and Espen Sandberg do an amazing job bringing something new to the established franchise by adding their own unique touches. They showcase their talents visually by creating scenes that are just striking to look at. I love the whole capturing of the underwater sequence as well as film’s opening. They do such a stunning job shaping and building the scenes. There are several memorable throughout the film because these two filmmakers knew exactly how to effectively capture those scenes. I always find it interesting to see independent filmmakers direct big budget features because most of them manage to do so with such ease which is exactly the case here. Ronning and Sandberg have somehow managed to recreate the spirit of the original while also creating what I think is the best Pirates film since the original.

Pirates of the Caribbean: Dead Men Tell No Tales is a theme park ride that I never wanted to end. It is a ton of fun and everything that a summer blockbuster should be. This is a rare sequel that I would argue is just as good, if not somewhat better the original. It tells a well-crafted story that is easy to follow with a great sense of adventure and plenty of laughs along the way. Dead Men Tell No Tales does exactly what I sequel should do and is entertaining while adding depth and story to characters that audiences have grown to love. This is a fantastic film and one that might not be entirely original since it’s part of a franchise, but it is still unlike any other film franchise today. Dead Men Tell No Tales is a must see and will be sure to be a standout of this summer movie season.

Scott “Movie Man” Menzel’s rating for Pirates of the Caribbean: Dead Men Tell No Tales is a 9 out of 10. 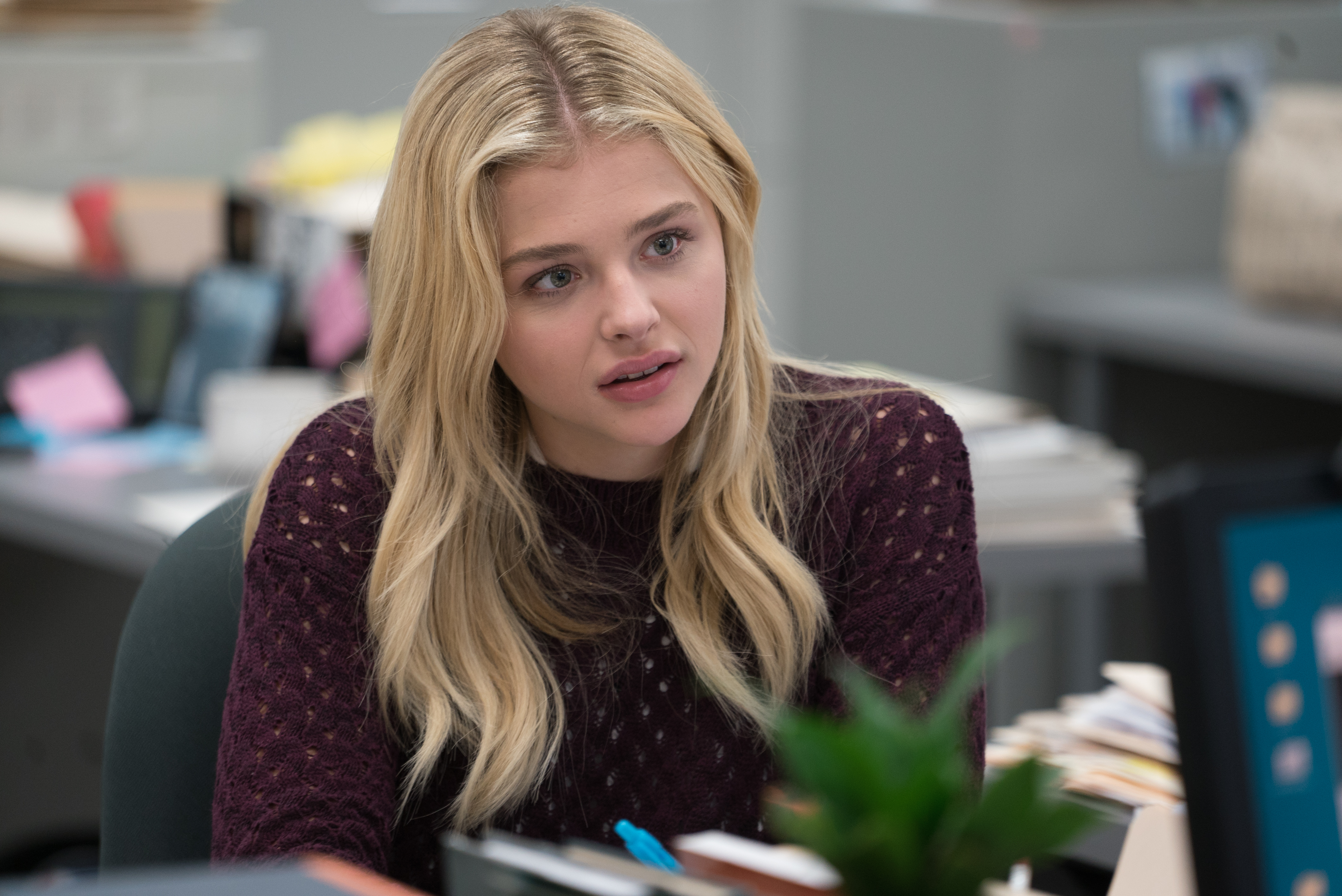 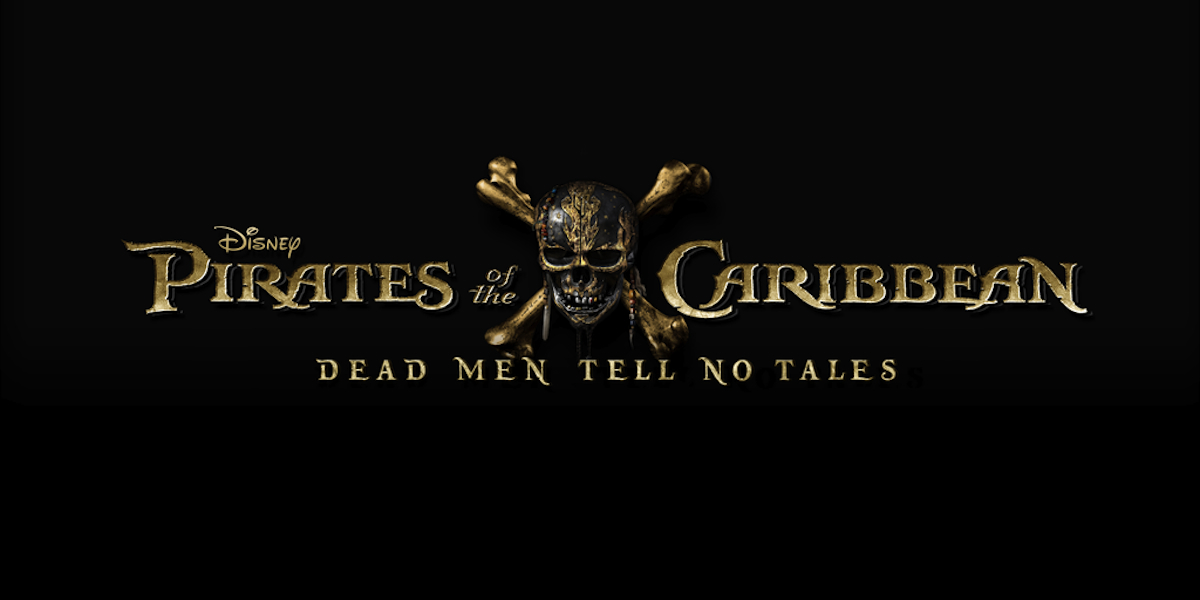 Pirates of the Caribbean: Dead Men Tell No Tales Review: A Non-Stop Theme Park Ride Blockbusters are the reason why the majority of moviegoers flock to cinemas. Hollywood knows this which is why every summer is filled with big-budget fil...
0
Average User Rating
0 votes
Please sign in to rate.