Pitch Perfect 3 Review: A Forgettable Farewell Tour That Never Should Have Happened.

Pitch Perfect 3 is the third and hopefully, the final installment in the Pitch Perfect franchise. Pitch Perfect 3 takes place a few years after Pitch Perfect 2 and the Bellas have moved on and are now working jobs in the real world. However, the Bellas aren’t happy with their lives and decide to meet up for what they believe is a reunion. The reunion just turns out to be a show where Emily (Hailee Steinfeld) and her college friends perform. Disappointed that they weren’t able to perform together, the Bellas look at their lives and think about the good old days when they sang together in competitions. It doesn’t take long before Aubrey (Anna Camp) comes up with an idea to bring the Bellas back together to do what they love. The Bellas join a USO Tour where if they are deemed good enough, they will be presented with the opportunity to perform alongside DJ Khaled during the final show of the tour.

I will openly admit that I haven’t been the biggest fan of this franchise. I thought the first film was watchable but overrated. The second was really bad, and I honestly didn’t know what to expect from the third entry going into it. Pitch Perfect 3 is a lazy, stupid, unfunny, uninteresting, and a pointless sequel. The film has three plots, none of which make any sense whatsoever. The first subplot revolves around Fat Amy’s father played by John Lithgow, and the second follows Gail (Elizabeth Banks) and John (John Michael Higgins) creating a documentary about the Bellas. For some unknown reason, they have nothing else to do with their time and money but travel around the world to videotape the Bellas perform.

The film opens with an action scene that feels entirely out of place. I couldn’t help but immediately ask myself “what was the point of that?” About midway through the film, I got my answer. Fat Amy and her father have this mysterious relationship and the story shifts away from The Bellas singing in the USO show and focuses on Fat Amy and her daddy drama. Instead of this being a musical comedy, the film oddly enough becomes an action crime caper that involves the Bellas being kidnapped and held hostage. I normally don’t spoil plot points, but I feel like I need to discuss this as it is the only way to truly convey just how ridiculous this film ultimately ends up becoming. 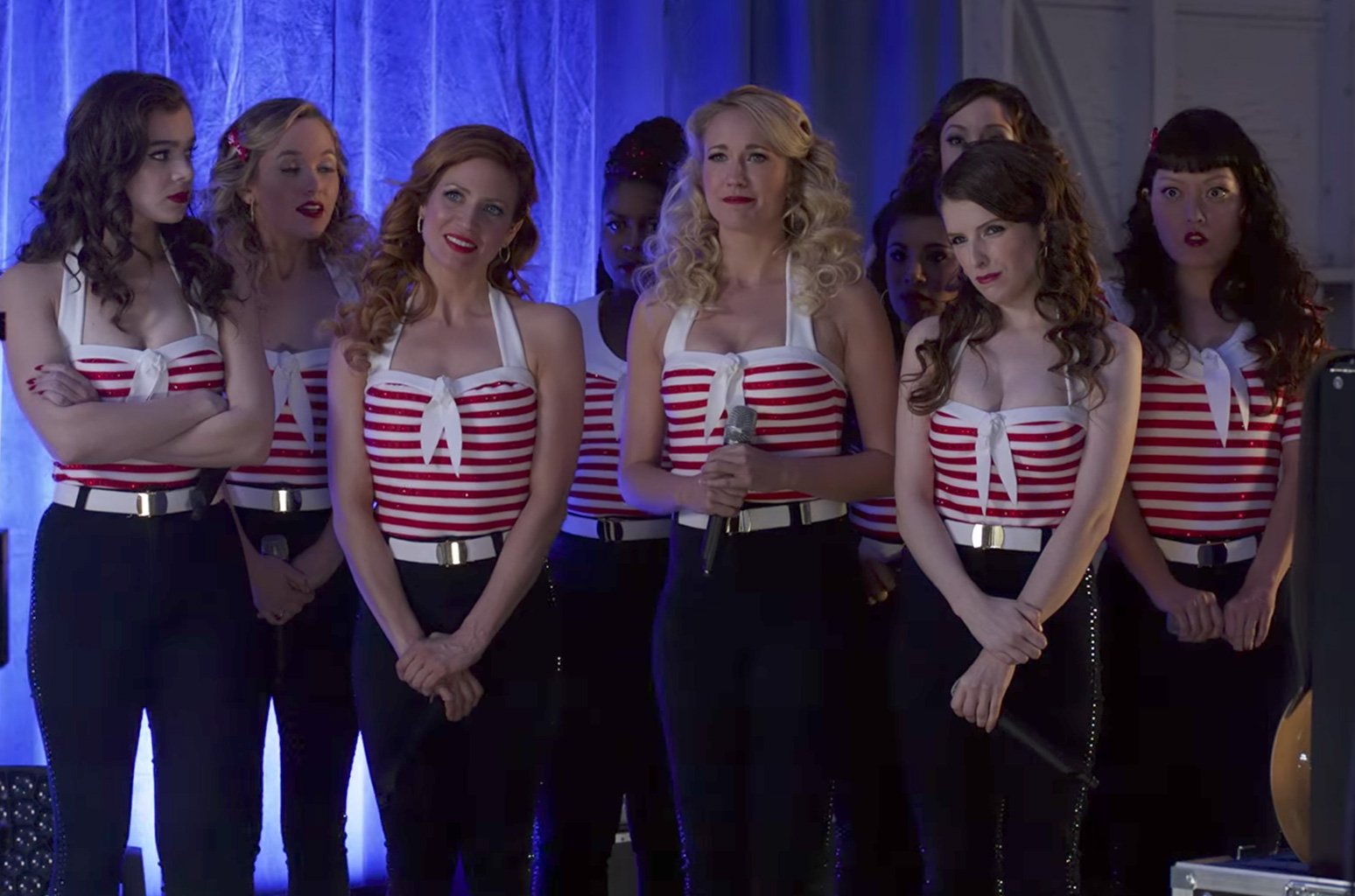 I feel like writer Kay Cannon was forced to write this sequel against her will and she didn’t care about anything other than the paycheck. The film seems like two different films, and maybe Cannon wrote a partial script, gave up, and someone else came onboard to finish it. I have to believe this is true because I just don’t know how else you can describe how haphazardly sliced together this film is. The Fat Amy subplot doesn’t fit the tone of the main story as it comes entirely out of nowhere, and it is so awful that I turned to my friend during the scene where Rebel Wilson fights in slow-motion to ask him “What the hell am I watching?”

For the third entry in a what I would consider a pretty successful franchise, the film lacks character development. I feel like each of the Bellas aren’t the same and have changed without the audience knowing. I don’t know why that is, but they all seem different. I get that the main story is about them reuniting and doing what they love, but when push comes to shove, the characters don’t discuss their lives with one another nor do they talk to each other. They just seem bored and disappointed with how they ended up yet somehow everything pans out for all of them by the end. It all makes zero sense since nothing changes for them during the film. The script just uses a montage to make the audience believe that the girls have all figured out their lives despite the fact that film doesn’t spend any time focusing on their careers or lives besides what is happening during the USO tour.

Out of everyone involved in this film, the only two cast members that still seem committed to the franchise is Hailee Steinfeld and Rebel Wilson. Steinfeld fits into this world because it represents who she is in real life. She is a musician and being in a film like this suits her. Rebel Wilson’s Fat Amy is still the fan favorite, but I despise watching Wilson play the same character over and over again. Amy’s jokes are always the same and are never funny. I never find myself even slightly amused by anything that comes out of her mouth. Watching John Lithgow play Amy’s Australian father made me want to stab my eyes out. Please don’t even get me started on how poorly developed his character is and how embarrassing it was to watch someone as talented as Lithgow sink this low. 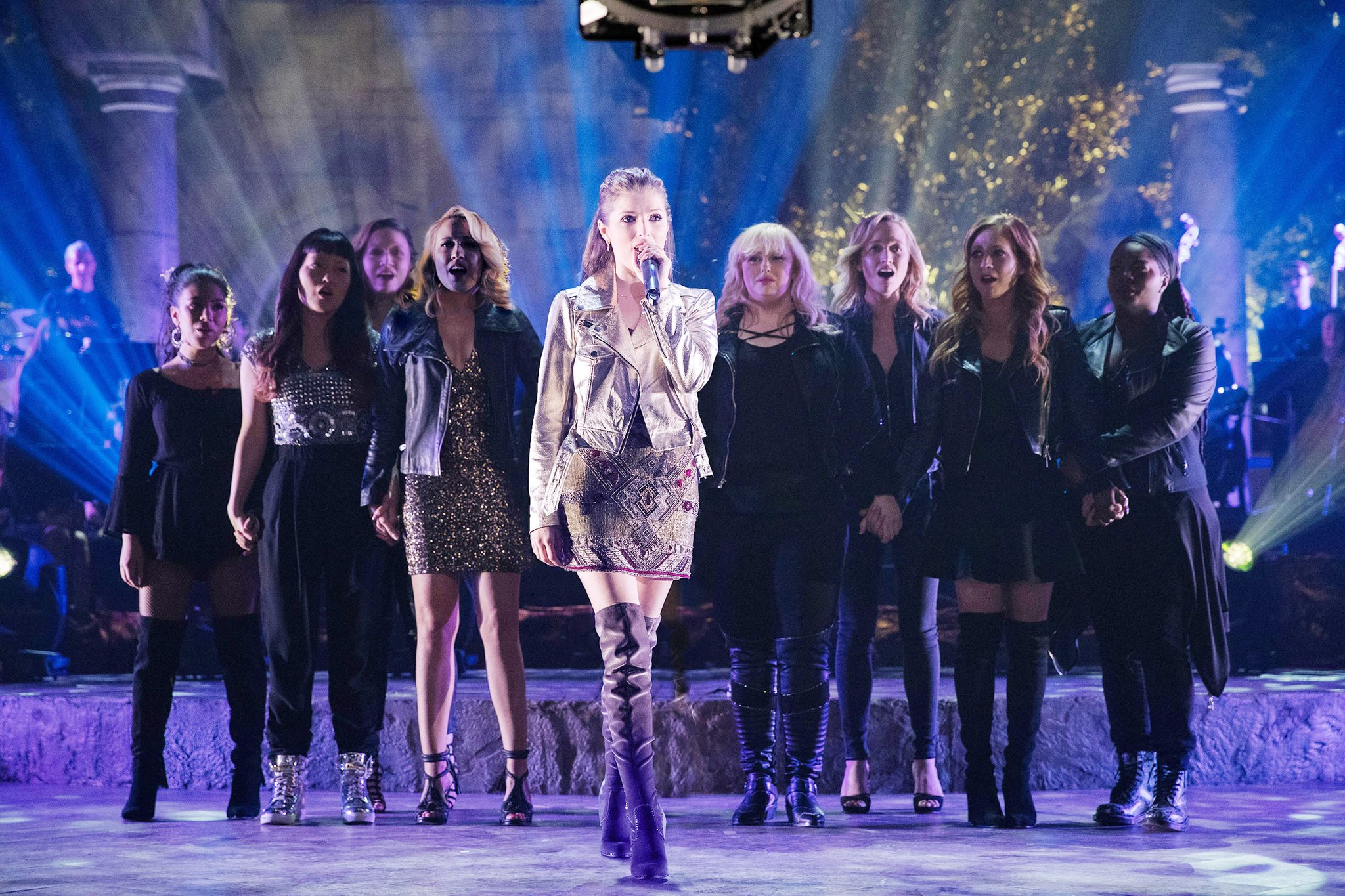 Anna Kendrick comes off as utterly uninterested despite continuing to prove that she has the voice of an angel. I think Kendrick is charming and has one hell of a voice but you can tell during several scenes that she is just going through the motions. She seems bored and uninterested throughout the film. What bugged me about her character Beca is that the film doesn’t even bother to discuss what happened to her career after the second film but instead, there is a 5-minute scene where she is shown working with some white hack rapper before she quits her job. Why would you spend so much time in the second film developing her storyline, if you don’t end up focusing on it in the following installment? It makes no sense whatsoever. The rest of the cast members including Brittany Snow, Anna Camp, and the others show up, read their lines, look pretty, and do whatever is required of them to collect their paycheck. These are all phoned in performances that require the actresses to do minimal acting.

This is such a hard film to review because I honestly don’t have anything positive to say about it. I guess I can say that I enjoyed hearing the Bellas perform Toxic by Britney Spears but I don’t think the audience needed to hear the song performed as many times as I did throughout the film. For what is known as a franchise that is centered around singing and music, Pitch Perfect 3 doesn’t even do that right. The music in this film isn’t as good or catchy. There just aren’t any memorable moments where the Bellas are performing. Sure, one can argue that the Riff-off scene between the Bellas, Evermoist, and Stacie was entertaining, but it pales to compare to the more elaborate and memorable moments from the previous two films.

Pitch Perfect 3 is so bad that it’s hard to comprehend how it even exists. I feel like the team at Universal were grasping at straws trying to paste together a plot that doesn’t even understand the film’s characters and why people like these films in the first place. Pitch Perfect 3 is a lazy cash grab and one that is to be avoided at all costs. It is one of the worst films of the year and isn’t worth your time or your money.