Franchises evolve over time, often addressing things people did not like about previous entries to be more inclusive. If you hated how empowering the Pitch Perfect movies were for women, then you’ll love how demeaning and abrasive the latest sequel is! 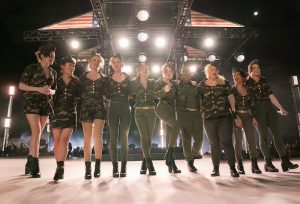 The Bellas are now in the real world, quickly dispatched of their previous love interests and successes. Beca (Anna Kendrick) quits the music producing job she landed in Pitch Perfect 2 over creative differences with an artist. Chloe (Brittany Snow) is working as a vet but she and Aubrey (Anna Camp) long for the days when they were on top with the Bellas. So Aubrey organizes a USO tour which will also help her work out her issues with her absent dad. It turns out that DJ Khaled (himself) will pick one of the other USO acts to open for him, so this could be the beginning of the Bellas’ pro career. 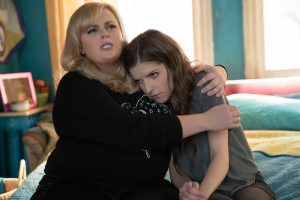 It’s fine to ditch the previous movies’ love interests, but it feels really off brand to have Beca and Chloe desperately looking for a new boyfriend. The first time they meet their military supervisor (Matt Lanter), Chloe is making goo goo eyes at him. Beca falls for DJ Khaled’s assistant. These are #notmyBellas. My Bellas don’t fawn all over guys. They have relationships with equal partners who support their individuality. 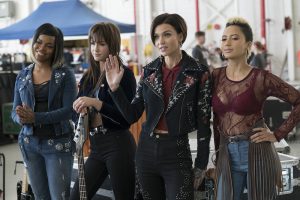 It really feels like Pitch Perfect 3 hates the Bellas. This is the first one that Kay Cannon did not write herself. We can only speculate what Mike White’s individual contributions were, but it feels like a red flag that the first one with a male cowriter completely sexualizes the women. There is even a scene where Amy (Rebel Wilson) proposes tarting themselves up to impress DJ Khaled at a party. Other bellas explain that “tarting up” means to “get slutty for attention.” This is not a good message. Women do not need to tart up and sexualize themselves to get opportunities from men. Also, the name of one of the rival bands is Evermoist and Stacie (Alexis Knapp) is pregnant but doesn’t know who the father it. Isn’t that hilarious! She’s so promiscuous how could she possibly know who fathered her child! 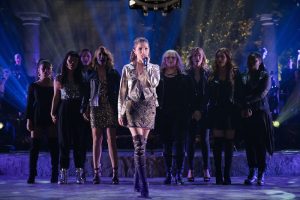 It is abundantly clear that Pitch Perfect 3 really does not understand who the Bellas are when it decides late in the film that each character doesn’t want what their entire arc has been about after all. It just throws out two movies’ worth of character development. They can’t think of a story that actually builds off of the previous stories. Beca should be working with difficult artists. There would be a good movie in Beca learning how to be diplomatic and convince an egotistical artist of her vision. 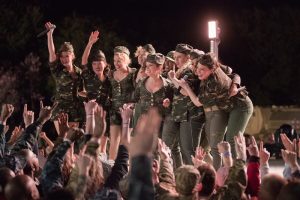 Pitch Perfect 3 also can’t even build on the themes its own story introduces. The USO tour/contest begins on an interesting idea. How do the Bellas compete against bands with instruments? That would be a challenge worth overcoming, or learning to cooperate with, but it’s abandoned for a caper involving Amy’s father (John Lithgow).

Somewhere in development someone decided that Pitch Perfect 3 should be an action movie. An a cappella action movie could be a fun new aesthetic, if they understood the style. It’s not just slow motion and fast cuts. The aggressive editing makes Pitch Perfect 3 the shortest in the series at 93 minutes, but it feels the longest because of the constant assault on your eyes and ears. 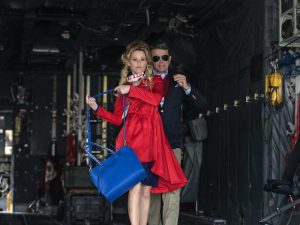 I also understand how big studio franchises work. It’s not like a single person came on Pitch Perfect 3 and singlehandedly ruined the sequel. In fact, the people hired to write and direct this entry were probably given a list of studio demands and had a decision: Do we take the opportunity to make Pitch Perfect 3 and try to make it work, or just watch someone else do what the studio wants? Studios don’t always understand what’s special about their own franchises, or maybe regimes change and one inherits the fruits of previous development. I do blame the studio for failing their empowering female franchise. I suspect the cast and filmmakers tried to make lemonade out of the studio notes, but they lost this battle.

Even before I saw Pitch Perfect 3 I assumed there would eventually be a Pitch Perfect 4 because nothing guarantees another sequel like a franchise declaring this is the last one. At this point, the cast is going to want to come back to redeem themselves. They will not want Pitch Perfect 3 to be their legacy.