In the late 1990s, I remember the superstorm that was Pokémon sweeping across the United States and everyone trading those famous Pokémon cards. Not really into it myself, I remember my younger brother obsessing over his cards and loving each one of them. When I heard that this film was in the works, I’ll admit, I wasn’t excited in the least. I thought it was “too late” and asked myself “why now?” Justice Smith plays Tim Goodman, a depressed and reclusive young man who has distanced himself from his detective father, and all things Pokémon. Thrust back into the chaos when he gets a call that his father has died, he teams up with his father’s partner, Pikachu (Ryan Reynolds), who he can mysteriously understand, to try to find out what happened to Harry Goodman. Along the way, they meet a budding journalist, Lucy Stevens (Kathryn Newton) who senses that something sinister is happening in Ryme City. Ryme City is unique in that it is a city where Pokémona and humans live side by side. This provides unique challenges as the two along with their Pikachu and Psyduck, try to solve the mystery of Harry’s death/ disappearance and stop evil from taking over Ryme City.

Within a few minutes of the film, I found myself totally invested in the characters and the story. There is something totally enchanting about Ryan Reynolds voicing a Pikachu that has you hooked from the very first scene. The character is adorable and fuzzy but slightly sarcastic with a bit of caffeine addiction. Alongside him, Justice Smith provides the perfect counterpart to the character with this dissatisfaction with being in Ryme City and searching for a father who he felt abandoned him long ago. Kathryn Newton continues her upward trajectory and really owns this character. Her enthusiasm and determination play well in the character. Bill Nighy who plays billionaire Howard Clifford gives a wonderful performance that feels a lot different than what he has previously done. It is without a doubt that I can say the Pokémon are the stars of the film. Pikachu and Psyduck alone are seriously hilarious and entertaining. Their combination is incredibly funny.

There is a lot of concern with taking well-loved characters and turning them into the computer-animated characters we see on screen, and rightly so. We have seen some pretty terrible adaptations that fail to deliver or just look plain wonky (i.e. the Sonic trailer from Paramount). I am happy to report that the Pokémon characters in the film are done with careful care and attention which really brings out the magic of the characters and reminds audiences of what once captured their love and wonder so many years ago. There are a few scenes in particular that really are enchanting, one of which involves a battle scene with Charizard and another a couple of Bulbasaurs. Pokémon lovers will surely fall quickly in love all over again.

The special effects in the film are top-notch. Not only are the characters stunningly done, but all of the effects are magical. The scenes in the city with giant balloons and hundreds of animated Pokémon are just incredible. There is also a scene where there the group comes in contact with some very rough terrain. These moments are some of the most intricate and gripping scenes of the film. No detail was spared and reminded me a lot of the breakthrough effects from Inception in 2010.

The writing by Dan Hernandez and Benji Samit is pitch-perfect and chock full of heart and humor that both honors and enhances the Pokémon world we love. The dialogue, especially between Pikachu and Harry is heartfelt, funny, and sharp-witted. The rapid-fire way that Pikachu speaks in moments during the film is full of little phrases or thoughts that are so quick you may miss them.

Pokémon Detective Pikachu delivers all the laughs, joy, and excitement that has been built through years of love for Pokemon. This is a film for the fans but also one that will open the Pokémon universe to a whole new audience and generation. Ryan Reynolds, Justice Smith, and Kathryn Newton along with her Psyduck take the audience on quite the adventure. Buckle up and hold on tight! 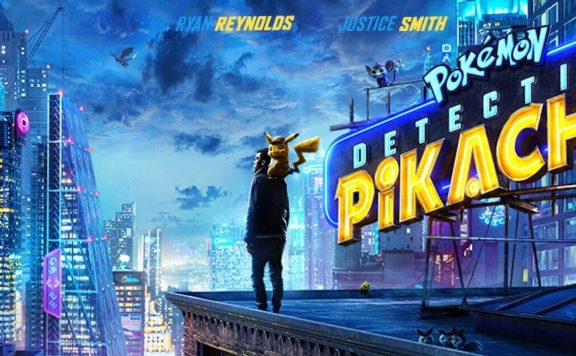 Detective Pikachu Review: Pikachu, I Choose You!
May 7, 2019