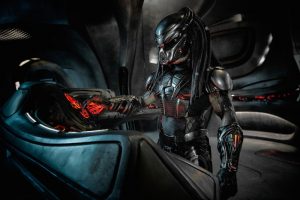 The Predator is a great monster for a franchise yet the franchise has struggled for 30 years. Its first sequel was considered a failure so it lay dormant until 2004’s Alien vs. Predator mashups. I guess 2010’s Predators was considered a failure too since it only made $52 million U.S., despite opening at $24 million. So really the two strongest sequels have been erroneously considered failures and The Predator was supposed to finally get the franchise right but it is even worse than the AVPs.

If it were just the action, The Predator would be a mediocre movie. Despite the graphic gore, the Predator fights are lame. They also show the Predator way too much. I know he’s the monster we’re here to see, and six movies in he’s not a secret, but there is absolutely no drama or suspense to him. Make him lurk! Have him evade his prey’s line of sight! Basic mystery filmmaking concepts.

They can show anything with CGI now and have it be a believable visual effect, but it reduces the main creature to just another character. He could be one of the humans, except he’s an alien. And yes, there’s an even bigger Predator who is also on screen so much you become aware it’s a CGI Predator or they superimposed the guy in the suit to make him tower over the others.

While the film does its title creature no favors, its attitude towards the human characters is downright disgusting. Quinn McKenna (Boyd Holbrook) helps a busload of military prisoners escape during a predator attack. It’s a twist on the baddest Earth warriors who can fight the predator, but they end up being examples of Earth’s most toxic dude bro behavior. 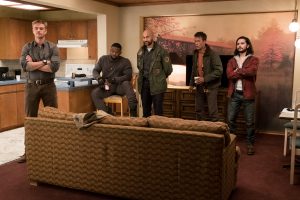 Several “comic relief” scenes revolve around the boys making female characters uncomfortable. I know they’re not supposed to be role models, but what is troubling is that the writers think this is funny. With Casey Brackett (Olivia Munn), a scientist, they take bets on how she will react to waking up surrounded by strangers with weapons. With Quinn’s ex-wife (Yvonne Strahovski), the joke is how everything they say to try to fit in only comes across as inappropriate and makes her more uncomfortable around these strangers in her house, on the run from the military no less. 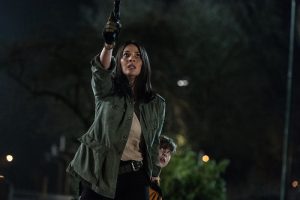 Then Nettles (Augusto Aguilera) hits on Casey while they’re planning their escape because isn’t it hilarious when men can’t tell a woman is uncomfortable and it’s an inappropriate time to proposition your professional colleague (if being teamed up by predator circumstances even qualifies them as colleagues)? This humor is definitely at the women’s expense. The guys look bad, but it’s deriving humor from how uncomfortable they make the women. It is toxic and the writers probably didn’t see it as anything other than dumb guys getting rejected, because they’ve never been harassed like a woman has.

It’s not all sexism though. There’s plenty of unconscionable mishandling of mental illness. Quinn’s son Rory (Jacob Tremblay) is sympathetically portrayed as having Asperger’s, but Baxley (Thomas Jane)’s Tourette’s is played for laughs. His uncontrollable outbursts make him the butt of jokes.  It’s especially shocking because writer/director Shane Black has Tourette’s. If it’s supposed to be self-mocking it comes across as perpetuating the cruelty he likely suffered from bullies. Plus, when Casey first meets Baxley she doesn’t recognize his condition. That a scientist does not recognize a fairly common condition is an indictment on the writing.

There are people for whom none of the above (nor its totality) will be dealbreakers, and The Predator was probably aimed at them. Even defenders of those attitudes would have to feel cheated by The Predator’s inability to just be a Predator movie. 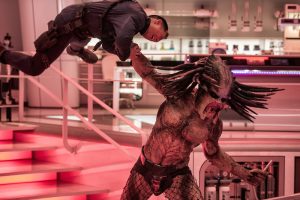 The writers must be so in love with their ragtag gang of characters that they won’t even let the Predator pick them off one by one until the very end of the movie. Instead, the Predator only kills generic military guys with no lines. The survivors usually defeat the Predator by applying strategy to their environment. In this one, they just shoot at it. A lot.

The film hints at the anarchy of a kid playing with deadly toys but abandons that after one scene. The prisoners escape because of the dumbest military transport guards ever, but that’s the least of this movie’s problems. That one’s just an action movie cliche.

The dialogue that’s not disturbingly unaware of its toxicity settles for simply being mediocre. There are plays on the franchise catchphrases that would coast as being fun in a script that had something else clever to contribute. The Predator is so proud of itself for pointing out the difference between a predator and a hunter that it repeats the joke again. Honestly, the funniest joke is a Haunted Mansion reference and it’s more from the perspective of, “Did he really just say that?”

Then, of course, The Predator sets up a sequel that feels egregiously presumptuous after what we’ve just seen. The fans have been with the Predator franchise for better or worse. We always welcomed new takes. You don’t need to sell us on making more Predator movies. We’ve really been waiting for a cameo from Dutch in any of these movies. Give us that movie! The Predator is not the direction this franchise should continue. 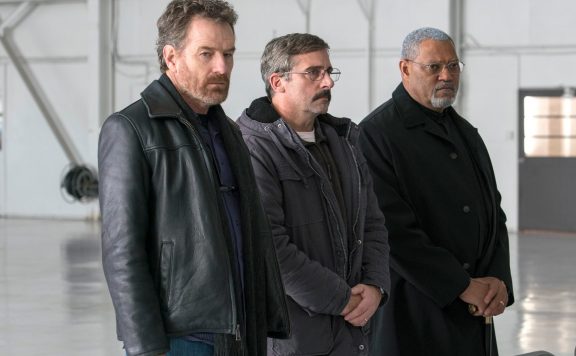 The Predator Movie Review: Whoever Wins, We Lose