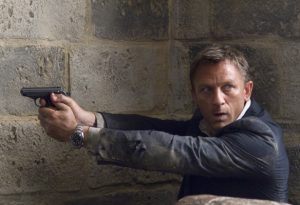 When Quantum Of Solace opened 10 years ago today, it set a record opening for a Bond movies with $67.5 million. That’s people wanting more Daniel Craig. He made such an impressive debut with Casino Royale, Bond fans and casual fans alike couldn’t wait to see him continue. Now Quantum Of Solace is perhaps the most hated Bond movie, up there with Die Another Day. I love it and a decade later I am a Quantum defender. 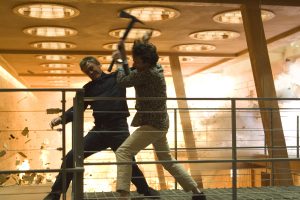 People didn’t like the handheld camera and quick cut editing. I fully support this perspective because I hate that style as a general rule. But I think coming after the Bourne sequels, Marc Forster said, “Okay, you want shakycam and quick cuts? Here’s how you do it right.”

Quantum of Solace is an editing masterpiece. I totally see how each shot flows into the next as opposed to the Bourne movies. I think Paul Greengrass ruined the Bourne movies. Those action scenes are nonsense of jumbled shots that don’t go together. So if you don’t like that style, sure, Forster’s version is no help. There are people who love Greengrass and say they can’t tell what’s going on in Quantum. That baffles me. 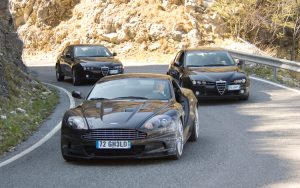 The opening car chase takes a lot of heat. People like to say they thought Bond drove off a cliff. I understand they’re being snarky but I think you can assume Bond doesn’t die in the pre-title sequence. Also, it’s a police Jeep that goes over the edge, after crashing into a building facade. No other car in the chase looks like that, and it was given a distinct action before falling. At the end of the chase, the bad guy’s sedan also goes over the cliff, after Bond shoots the driver at point blank range and you see the driver riddled with bullets and lose control.

During the chase, you see the gunmen shooting at Bond. They blow out the tire of a nearby truck. The truck crashes into the wall, dislodging a piece of its bumper. The truck then swerved into Bond and the protruding shard jams through his driver side door. Bond ultimately loses his door. That’s a clear progression of action. It’s just fast. I can follow the cuts of Bond’s maneuvering through traffic but even if you can’t, are you telling me you follow The Bourne Supremacy car chase (which incidentally made a little girl throw up in a screening I attended)?

It’s possible that people just have different eyes. What resonates with some doesn’t with others, and I just speak Forster. I liked his action in World War Z too. For example, when Bond chases the mole and they crash onto the scaffolding, I see how Bond pulls pieces off to make the mole slip, how they get caught in the pulleys, where Bond’s gun is and how he grabs it and swings around at the last possible moment. Even when he’s chasing after him on the rooftops, I see how Bond slips on a disheveled shingle, slides down the roof, makes a jump onto a balcony but crashes his shoulder into the wall. He survived and continued pursuit, but not totally unphased. 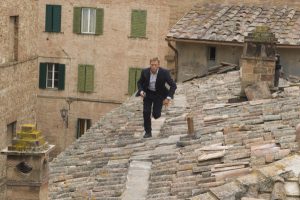 Part of it is that not every shot is handheld. There are occasional locked off shots in the edit to ground you in the sequence geography. Even the fight in Bond’s hotel room is shot wide enough that you can see all the moves and countermoves. It’s also refreshing that the drama scenes are shot normally. In Bourne EVERY scene is handheld.

I don’t think any more Bond movies should use that style and I don’t think any movies should ever use that style. But it is a product of the ‘00s and I’m glad there is one Bond movie that comments on it, since Bourne was a direct threat to the franchise. If you like the style I think Forster’s approach is worth studying, and asking yourself what at all works about Greengrass? If you hate it, Forster can either reinforce why or deconstruct how it could work better,

Greengrass is selling the idea that discombobulated filmmaking is making you feel like you’re in the action. It’s not. Human beings have equilibrium so even in frenetic situations we can see straight. And most of his cinematography is achieved by a camera operator manually shaking the camera in an otherwise steady scenario. So if the camera wouldn’t even shake standing up close to a brawl, why should the movie shake? But if that’s what audiences wanted, Bond could do it too. 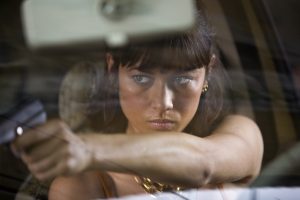 I don’t think doing a direct sequel to Casino Royale was a particularly effective strategy. After the opening titles Quantum of Solace essentially becomes a separate Bond movie anyway. He meets Camille (Olga Kurylenko) and ends up investigating the water scheme anyway so it doesn’t much matter that it’s the day after. The Vesper story is so convoluted it doesn’t really inform Casino Royale. The premise that you need to watch them back to back doesn’t hold up either. I’ve done it. It doesn’t add anything. Quantum is still a separate movie.

People complain it’s too serious but I love the humor in Quantum. The whole Fields (Gemma Arterton) subplot is Bond being naughty and a troublemaker. They never say her first name but strongly imply he has a Bond girl name like Strawberry Fields (and that’s her name in the end credits). But it ends tragically and shows that it’s not all fun and games.

This is the last movie where Bond is really a dangerous blunt instrument. Skyfall brought back the formula hardcore and while I loved seeing a traditional formula in Spectre, I lament that we only got two movies of Craig’s new Bond before he fell into a routine. 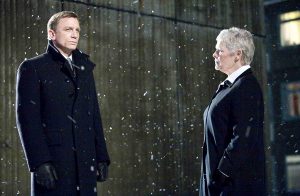 The dialogue is Fleming-eque. When M complains they didn’t get Le Chiffre alive, Bond says, “If they wanted his soul they should’ve made a deal with a priest.” Dayum, that’s a Bond you don’t fuck with. M says, “When you can’t tell your friends from your enemies, it’s time to go.” M and Bond’s banter is short and pithy, each statement punctuating a cold hard fact. Skyfall took more time trying to find the point of their scenes together, so this is the last great two handed between Craig and Dench too. I just adore their final scene standing out in the snow. That is professionals commuting to each other with mutual respect. 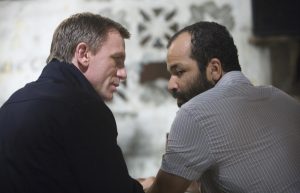 I love Felix Leiter (Jeffrey Wright) being disgruntled and pissed off at all the CIA bureaucracy. It’s got the spy game of CIS, MI6, corrupt regimes and sleeping with the enemy for resources like oil. That’s more interesting than the big bads of Skyfall and Spectre (although I like the new Blofeld) because Bond is not just fighting a supervillain. He has to navigate geopolitics to do what’s right when his own government and allies won’t. The franchise never really did anything with the Quantum syndicate, presumably because they got the rights to SPECTRE back, but Skyfall chose not to follow up on Quantum either so it was likely already decided then. 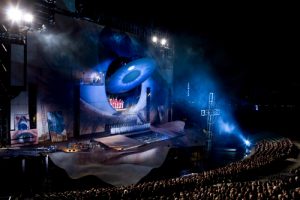 Bond spies in this. He uses his Universal Exports business card to get a henchman to call the number to check. Then Bond has that cell phone, contact and GPS on the whole gang’s travel. He roots out the international conspirators at the opera. M translates CIA bullshit by reading between the lines.

The gun barrel coming at the end was a fun twist but they shouldn’t have done it again in Skyfall. I’m glad it’s back at the beginning where it belongs. 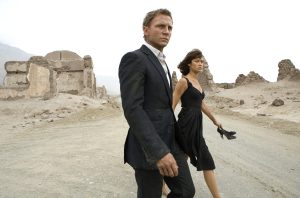 People who didn’t like Quantum of Solace got their wish. The Bond franchise has always been reactive, so when people got sick of over the top Bond, they reinvented with Daniel Craig. When fickle fans got sick of that after only two movies, they reinvented Craig with Skyfall. And people hated Spectre so they’re presumably reinventing again. I guess it happens so frequently I can’t complain. Moore and Connery reinvented within their runs and Lazenby and Dalton got short shrift in theirs, so Craig has actually gotten to do a lot in his run. Everyone’s gotten something they wanted out of his Bond movies. I’m just one of the fans who dug Quantum of Solace.