Available to stream on Amazon Prime beginning July 24th is Radioactive, the new biopic about two-time Nobel prize winner Marie Sklodowska-Curie. The film was directed by graphic novelist turned filmmaker Marjane Satrapi (Persepolis), and stars Academy Award-nominee Rosamund Pike (Gone Girl) as Currie, Sam Riley (Maleficent) as her husband, Pierre Currie, and Anya Taylor-Joy (Emma) as their adult daughter, Irene Currie. The film chronicles Currie’s life from meeting Pierre, to discovering polonium and radium, the birth of their daughter, Pierre’s untimely death, winning her Nobel Prizes, her sacrifices during World War I, and her own death, as well as the repercussions of her life’s work throughout history. The result is your standard period piece biopic, which elevates itself from similar projects with excellent performances from its leads, especially Pike, exciting directing from Satrapi, and a solid screenplay by Jack Thorn (The Aeronauts).

The film begins in the late 1800’s by introducing us to Marie Sklodowska (Pike), a young scientist from Poland who has just moved to Paris and is having trouble adjusting to the male dominated scientific world. She soon meets a scientist named Pierre Curie (Riley), and they eventually marry and have two daughters, Irene (Taylor-Joy) and Eve (Cara Bossom). Marie and Pierre continue their scientific work together, which leads them to the discovery of polonium and radium, and to be rewarded with two Nobel Prizes. However, their work has side effects and make both Marie and Pierre sick, eventually leading to Pierre’s tragic death due to a horse trampling. Alone, and raising her two kids, Marie continues her work through WWI when she realizes that her research with radiation can help save soldiers lives if she can bring her X-ray machine to the battlefield. Now, with her daughter Irene by her side, Marie will do whatever it takes, including selling her Nobel Prizes and fighting the British government, in order to save lives and cement the legacy of her and Pierre’s lifelong work. The film also features flashforwards that demonstrate the historical ramifications of the Currie’s work, including using radiation to fight cancer, the use of X-rays in the 20th century, and the atomic bomb.

Radioactive has a lot of moving parts. It’s a biopic, a period piece, a love story, and it has huge set pieces like a WWI battlefield or the testing of the atomic bomb. Director Marjane Satrapi does an excellent job of orchestrating all of these different elements and crafting an emotionally moving film that seems extremely relevant today. Satrapi focuses in on several themes in Marie Currie’s life including her fight for equality in a male dominated world, her pursuit of science, and the results, both good and bad, of her life’s work. To that point, one of the most interesting storytelling techniques that Satrapi utilizes in the film is her inclusion of flash forwards to illustrate the effects of Currie’s work on future generations. It’s one thing to say, “Marie Curie discovered radium.” It’s another thing to actually show the audience how her work has helped with cancer research and saved countless lives. And just at the point in the story where Marie realizes her work could be used to harm millions, the film flashes forward to the shocking devastation of the atomic bomb dropping on Hiroshima, which helps to illustrate Marie’s fears. It’s a wonderful filmmaking devise that Satrapi and screenwriter Jack Thorne use to great effect. 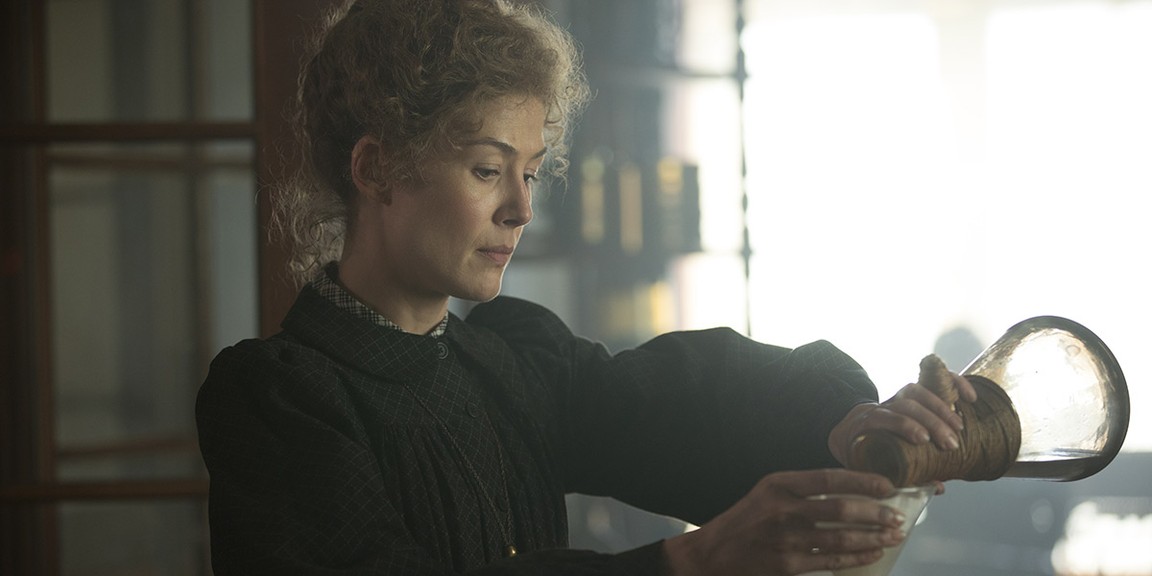 Speaking of the screenplay, Thorne does a fine job of putting in all the facts, and I truly feel like I know more about Marie Currie’s life, and especially her work, after seeing the film. However, the script may have fallen short in moments because of all the information being thrown at us at once. When the film does slow down for a moment to focus on the couple, it creates some very nice emotional moments between Marie and Pierre, which the actors playing those roles relish in. Thorne also created an excellent third act sequence for Marie and her adult daughter Irene, with WWI as the backdrop. The scene not only creates a great mother/daughter moment, but also allows Marie to show regret over what she has had to sacrificed for her work and allows Irene to understand why her mother had to do it. Anya Taylor-Joy brings an elegance to her role as Irene and has great chemistry with Pike.

Sam Riley, best known for his work in the Maleficent movies, really shines as Pierre Currie and brings a certain charm to the role. He also has great chemistry with Pike, and you really get the feeling through his performance that Pierre truly loves Marie. Historically, Pierre Currie is a tragic figure, and Riley injects the character with youthfulness and a certain likability that makes his ultimate fate that more devastating for the audience. But in the end, make no mistakes, Rosamund Pike is what makes this film work as well as it does. She is absolutely formattable as Marie Currie and brings the character alive with a graceful strength. She is driven, focused, and feisty, but at the same time emotionally vulnerable. Pike gives one of her best performances to date, almost on par with her work in Gone Girl, which earned her an Oscar nomination. Radioactive is a solid biopic, with a fascinating subject, a visually interesting director and three powerhouse actors. It’s a little slow in parts but is overall a pretty satisfying film.