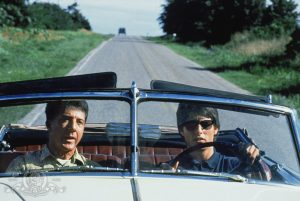 30 years ago, Rain Man opened and began its path to becoming the number one movie of 1988 (although it’s gross would make most of that money in 1989, playing through June), four Oscars and a place in pop culture history. Dustin Hoffman’s portrayal of an autistic savant was the first exposure many viewers had to the spectrum. Now we know there are many more manifestations of autism. Hoffman based his on two people, Kim Peek and Leslie Lemke. 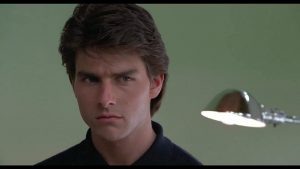 The main story of Rain Man is how selfish Charlie Babbitt (Tom Cruise) learns to love his brother Raymond (Hoffman) but I saw a more interesting micro story. I love how Charlie thinks he can handle and manage anything but every step of the way, Raymond is more than he can handle. He’s not prepared to stick to Raymond’s schedule of food, TV and bed times. He thinks he can fly Raymond to LA but he can’t even get Raymond on a plane. 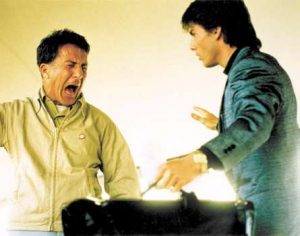 When Raymond stars hitting himself in the airport that’s game over. Charlie can’t have a scene where strangers question him, and he doesn’t know how to calm Raymond down except by abandoning the airport. Driving is no picnic either because a highway accident also triggers Raymond. 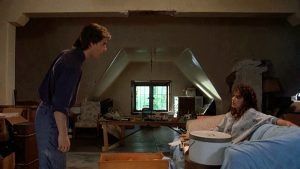 Of course. we know this type of guy. Charlie actually can’t control anything he tries to. He’s selling luxury cars but can’t get them to pass EPA emissions or meet his buyers’ deadlines. These kind of hustlers are always stressed, and stressful to be around. There’s always some thing they didn’t plan on and some scheme they have to spin things their way. Maybe we’re supposed to root for Charlie, but I love watching him squirm. He doesn’t deserve to have his get rich quick schemes pay off. 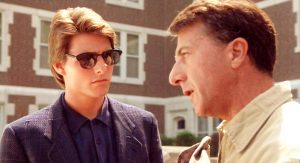 I get what made Charlie this way. He felt abandoned by his father. Either one of them could have reached out to make amends but I’d probably put that more on the parent to love his son unconditionally, and never stop trying to reconnect. So Charlie grew up thinking he had to fend for himself and it made him controlling. Considering his parents thought it would be a good idea to keep Raymond a secret from Charlie, maybe controlling runs in the family. 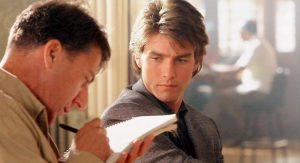 Some of Raymond’s specific needs just make it funny to see Charlie freak outs. Autism requires patience and compassion, two things Charlie does not have. So eating with toothpicks instead of a fork frustrates Charlie and needing the underwear from a specific location of Kmart really sets him off. I wonder if DVR and VOD would’ve helped Raymond with People’s Court or aggravated him more. It’s about the scheduled time of TV shows so having it at different times would be besides the point. 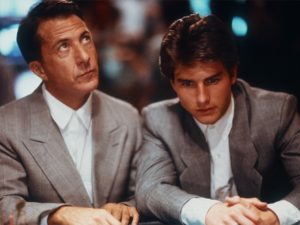 Charlie’s gambling plan is fairly sound though. The casino doesn’t even know how he’s winning because they think no one can count six decks of cards. Raymond even says there’s lots of Queens in front of the dealer and that doesn’t arouse suspicion. 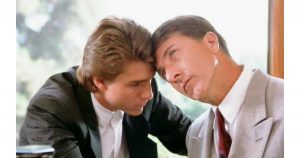 Even when Charlie grows a heart it becomes apparent this 24-year-old bachelor isn’t equipped to care for his brother. Basic household things like toasters and smoke detectors are an issue and Charlie wouldn’t be able to babysit all the unpredictable hurdles Raymond could face. Maybe in another 10 years. Or rather, maybe if Charlie had been allowed to grow up learning Raymond’s unique needs, he could have developed into a caretaker, but it’s too much all at once. 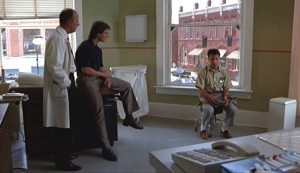 The most ‘80s thing about Rain Man is probably all the pay phones Charlie uses to check in with his business on the road. Cell phones would render pay phones obsolete, so no farting in the phone booth scene. Also, GPS would help Charlie navigate the road and probably avoid some of their adventures. They use the R word as they did in the 80s, and a guy like Charlie definitely would, but it’s also relevant that he stops using it once he gets to know Raymond.

Considering Rain Man is Charlie’s story, it is rather egregious that Cruise was not nominated. I understand Hoffman’s nomination and win for creating the iconic role. It must have been harder for the Academy to see the nuances of what Cruise was doing. Charlie is the sort of character Cruise would play a lot, although far less frequently did that character transform the way Charlie does. Ben Affleck and Robert Downey, Jr. would play those sorts of controlling fast talker characters in their heydays too. 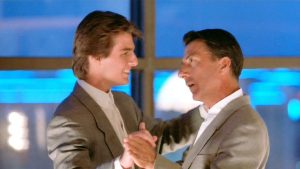 Rain Man remains one of the best odd couple/buddy road trip movies ever. There could be infinitely more movies made about the infinite colors of developmental conditions, but Rain Man is the gold standard for any movie about siblings or otherwise connected pairs trying to reconcile each other. If you’d like to revisit Rain Man, it is currently on Showtime, which I accessed via my Hulu subscription.