May 25 is an important movie anniversary for lot’s of people. May 25 falls on a Friday again this year, so it’s nice to have more new movies debuting in the wake of such classics.  I am talking, of course, about the 30th anniversary of Rambo III. 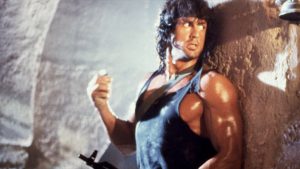 This same week in history 25 years ago was the spoof Hot Shots! Part Deux which used Rambo III as its spine. So it’s fun to look back at the real thing too. 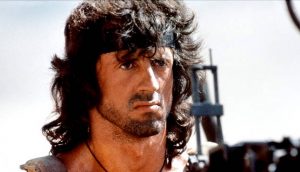 As a kid, I didn’t really appreciate the state the Rambo franchise was in. I didn’t even understand the depth of Rambo: First Blood Part II until I was much older. A traumatized Vietnam veteran got to go back to Vietnam in 1985 and win, thanks to still standing POW camps and Soviet troops aiding the remaining Vietcong, which Rambo (Sylvester Stallone) single-handedly defeated.

So what else was there for Rambo to do in peacetime with his own major conflict resolved? Rambo III was pretty much the only standalone Rambo adventure. They just had to find a new war for him to fight. 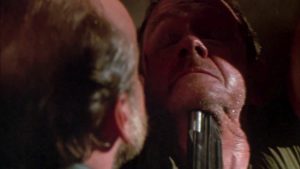 Making It about Col. Trautman (Richard Crenna) did give Rambo III a thematic connection. Trautman made Rambo a killing machine and tried to look out for him when he got into trouble stateside. So when his father figure gets captured, Rambo has to become Trautman’s Col. Trautman.

I forgot how much Trautman says “full circle” when he tries to convince Rambo to come with him. It feels like a sincere effort to force Rambo to come to terms with himself, instead of distracting himself with handiwork at a monastery. I think it wouldn’t be until 2008’s Rambo that John Rambo would really confront his true nature. He actually seems pretty removed from his trauma in this, more like just a regular Stallone action hero. By the end he and Crenna are bantering like it’s Lethal Weapon. Their chemistry is so much fun, it doesn’t matter if it’s out of character.

So Afghanistan seemed like a new frontier of war. Stallone was always politically relevant. Russia had some bad forces over there. Rambo teamed up with the rebels. It was just changing too fast for a movie to pinpoint. By the time of Rambo III release, Gorbachev was coming to the States for summits so Russian villains were suddenly outdated. Rambo III would become even more anachronistic decades later.

Who knew the mujahideen, at least some of the ones who splintered off, would become al-Qaeda? Rambo is in good company. James Bond joined the Mujahideen for a raid in The Living Daylights too. Back then, they were fighting invaders who were raping their women and killing their families. The idea that they had already taken their last rites so considered themselves already dead was a provocative mythology for Rambo’s new allies.

Rambo III’s dedication was altered in later home video versions. Theatrically it read “This film is dedicated to the brave mujahideen fighters of Afghanistan.” That would mean something quite different when the Blu-ray came out, so it’s been changed to “This film is dedicated to the gallant people of Afghanistan.” Even so, the latter update is at best optimistic that the Afghanis resisting cruelty and oppression would win. 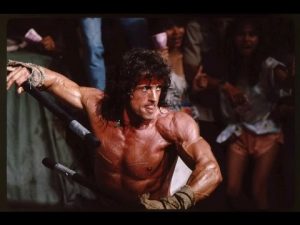 I wonder if they kept making Rambo movies, would he have joined Desert Storm or Bosnia? 20 years later Stallone used Rambo to shine a light on Burma. With Vietnam truly over, it seemed he was to be a vehicle for exploring the world’s conflicts. Rambo V is set to be about Mexican cartels, which is a war since the U.S. presumptuously declared a War on Drugs.

But there is something to the standalone Rambo movie. Keep sending Rambo on adventures. Show how he adapts to any environment and uses the biggest new toys. Rambo III had Stinger missiles, helicopters, tanks and explosive arrow tips.  Michael Bay has taken over showing off the military’s latest toys in Rambo’s absence. 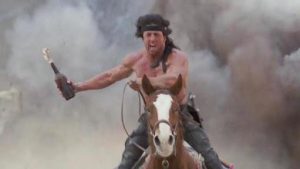 Rambo III also filmed in exotic locations: Thailand, Pakistan and Israel standing in for Afghanistan. Stallone and Crenna were there, not on a green screen. I miss this kind of epic photography in action movies. The desert was a new environment for Rambo, who’d thrived in jungle combat. Since he returned to the jungle in Burma, this is still the only off brand Rambo movie. He rides horses too. Helicopters and horses in the same shot. Imagine how much time it took to reset for take two. 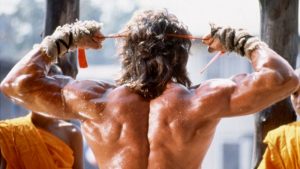 Like all Stallone movies Rambo III is a monument to his own body. It opens with loving closeups of his sweaty preparation for a fight, and the whole movie is in desert heat so his chest and arms remain uncovered. Even the poster made sure to show off Stallone’s guns, and not the kind that shoot bullets. I celebrate Stallone for this. He’s earned the right to celebrate his physique. He shows that he puts his body through hell, either Rocky working out or Rambo being beaten and tortured.

Apparently Rambo III held a record for body count. It didn’t phase me as a 10-year-old boy. I didn’t feel like Rambo killed any more people than The Terminator. Robocop may have had fewer deaths but each on was certainly more graphic than Rambo III’s gunshots. Well, the guy who’s both hung and exploded really deserved it. I bet there are PG-13 movies that have killed more people since. Hot Shots! Part Deux made fun of the body count record, but I bet some of the Transformers movies topped it for real. 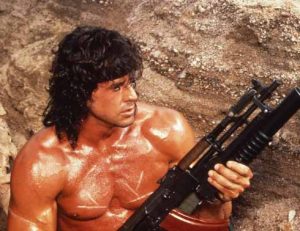 ven including the bad guys’ massacres, I was already desensitized (in a healthy way because I knew the difference between real violence and movie fantasy). Don’t worry, I was supervised. My dad took me to movies like this. Stallone gave us someone to root for together. I don’t think either of us realized we were essentially going to a gladiator show to watch him flex. That might’ve made it weird, or maybe it would’ve bonded us further. Who knows?

“I’m your worst nightmare” became a popular catch phrase. Arnold even referenced it in Last Action Hero 5 years later. It’s actually paraphrased. In the movie, Rambo is only responding to the question, “Who are you?” So he says, “You’re worst nightmare.” It’s a good line either way.

I do wish for John Rambo to find piece. The reason First Blood is so poignant is that it’s really about how badly we treat our veterans, and we still do. But it’s also true we never stop needing warriors, so even if John Rambo is able to make a life for himself in society, it won’t be long before someone says, “Hey, remember that guy who can who can win entire wars by himself? Why don’t we send him after the latest oppressive warlord?”