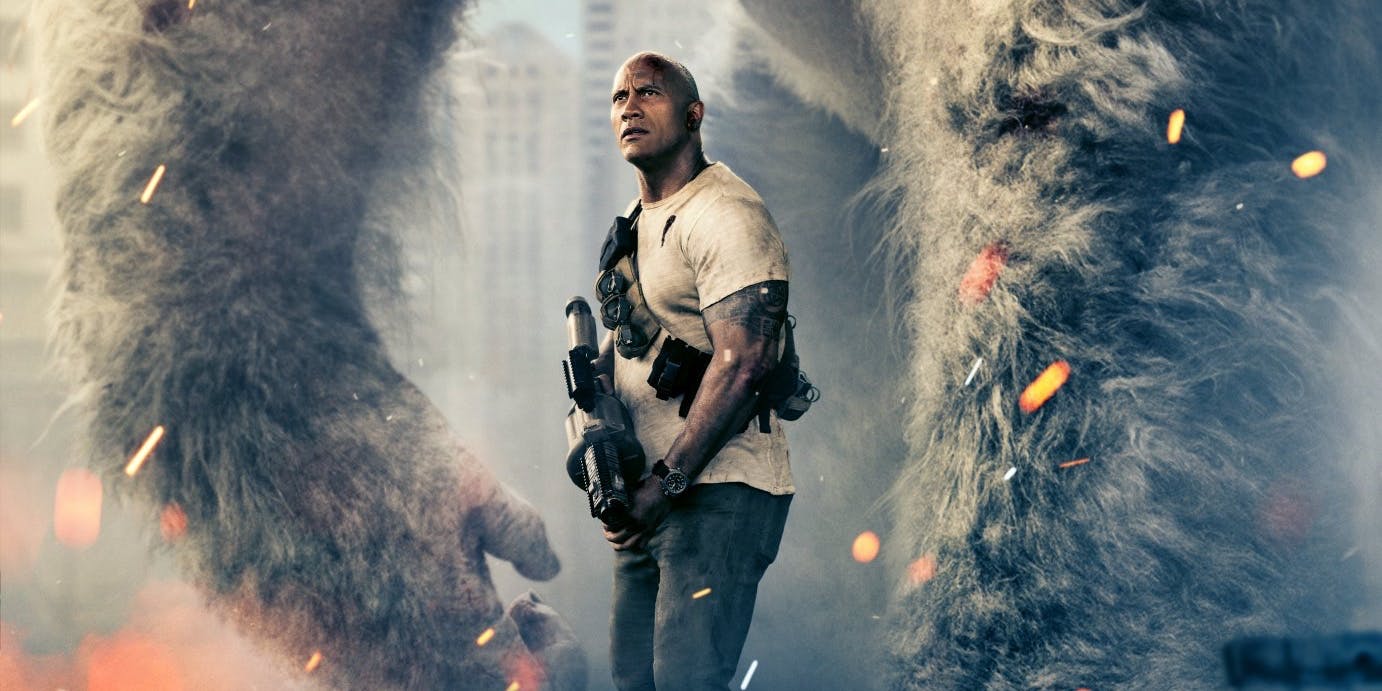 Rampage stars Dwayne Johnson as primatologist Davis Okoye in his most outrageous role to date.

The plot of Rampage is centered around a top-secret genetic experiment which ends up turning Okoye’s best friend George, a rare albino silverback gorilla, into a giant and violent monster. As Okoye attempts to protect George from the government, he learns that several other animals throughout North America have also been affected by the virus. Okoye teams up with geneticist Kate Caldwell (Naomie Harris) to track down an antidote to save George and the city of Chicago from being destroyed by a group of massive mutated monsters.

For nearly three decades, studios have tried to turn popular video games into feature-length films. While a handful of video game films have made some money at the box office, most notably the Resident Evil franchise, the idea of a truly great video game film adaption has not yet occurred. I would argue that Alicia Vikander’s recent Tomb Raider reboot is the best video game to film adaptation to date but it only received average reviews and while it is doing well at the box office internationally, it didn’t do all that great here in the United States.

The video game Rampage, which is a cult classic arcade game that I played fairly regularly as a kid, is not one that is heavy on plot. The whole game is focused on a bunch of mutated monsters walking around a city, eating people, climbing, and destroying buildings. It was a very simplistic and silly game, so upon learning that it was being turned into a film, I was a bit shocked considering the lack of substance and story found in the actual game.

I saw an early screening of Rampage with a friend. Throughout the film, my friend and I looked at each other, rolled our eyes, and consistently laughed at what we were witnessing unfold on-screen. If you have seen the trailers or television spots for the film, you should already be aware of the type of film that this is. Rampage is not a cinematic masterpiece or a groundbreaking blockbuster but instead the ultimate big-budget B movie that cannot and should not be taken seriously.

Truth be told, upon exiting the theater, I instantly thought to myself, “Wow, that was bad,” but then I thought about it for a few days and realized that I completely missed what the film was going for. Rampage is meant to be big and dumb. It’s non-stop campy fun that is as simplistic as the video game that it is based on. As I mentioned earlier, the Rampage video game is all about monsters climbing and destroying buildings. Peyton takes that concept, adds a little story and heart to it, and turned it into 90 minutes of mindless entertainment.

As a critic, I am often critical of films because I feel like they don’t deliver on what they promise but that isn’t the case here. Rampage director Brad Peyton loves movies, and even though his films aren’t considered game-changers, you have to appreciate that as a filmmaker he wants audiences to have a good time. Peyton has created what I would consider being the ultimate monster movie. It features a series of monsters tearing through cities and destroying everything in their path. It’s nothing that we haven’t seen before, but sometimes audiences need and want to sit back and be entertained.

Dwayne Johnson has become the master of delivering one outrageous performance after another. His role as Luke Hobbs in the Fast and Furious franchise is so over the top and ridiculous but perfectly fits the tone of those films. In Rampage, Johnson continues to have fun with the material and completely hams it up for the camera. As the film moves into the third act, the level of ridiculousness is tripled, and Johnson embraces it and goes along for the ride. I realize that this has been said many times before, but Johnson is so damn charismatic. I love that he isn’t afraid of poking fun at himself while taking on roles that allow him to showcase different dimensions of his personality.

Jeffrey Dean Morgan pretty much plays Negan from The Walking Dead, and it works in the film. Morgan, like Johnson, knows how to have fun with the material and embraces the ridiculousness of the material. Morgan is charming, and the scenes between him and Johnson are some of the best scenes in the film. I think the two of them should team up again for a future project maybe where they both play Texas Rangers or something along those lines. I can see them starring alongside one another in a buddy comedy.

The rest of the cast tries their best to embrace the scripts ridiculousness, but sadly they all fail… big time. I love Malin Akerman and think Jake Lacy is an incredibly underrated actor but watching them in this film made me cringe. I honestly felt embarrassed for both of them because everything from their line delivery to their mannerisms just came across as forced and awkward. I get that they were supposed to be over the top bad guys, but neither actor was able to make that work in their favor. I would go as far to say that both of these actors were miscast in their roles and didn’t fit in the tone of the film at all.

Naomie Harris didn’t fit into this world either, but at least she was able to get by thanks to sharing most of her screen-time with Dwayne Johnson. I feel like the two of them had decent on-screen chemistry but that was about it. Her line delivery came across as very wooden and unrealistic. I didn’t buy into her character or her backstory. I felt like her character was used as an unnecessary and convoluted plot device that was haphazardly thrown into the film. 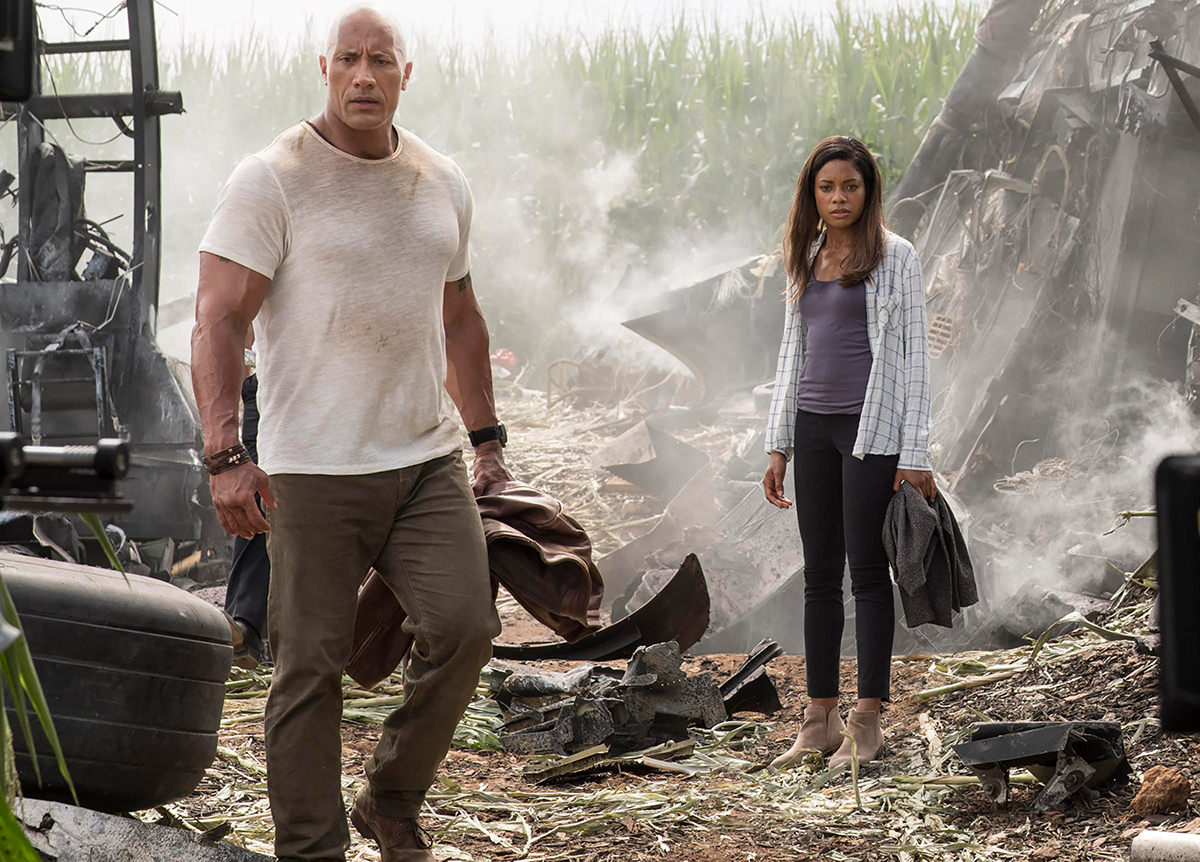 Speaking of the plot, it is somewhat shocking at how complicated the four writers tried to make this film. While it is already shocking that there were four writers on a film like this one, I cannot believe the writers felt the need to create multiple subplots. This is the type of film where all you needed to know is that there is a virus and there is an antidote. There is no need for all this scientific jargon that the writers try to add to the film because it does nothing to help or better the film.

Regarding George and the rest of the monsters, I liked their look and thought it was great to watch these giant creatures destroy buildings throughout the city. I liked the relationship between Davis and George. It felt very similar to that of a man and a dog. I would have liked George a lot more if Peyton and the writers didn’t make him do such juvenile things like giving the middle finger or telling Davis that he should have sex with Kate using sign language. These moments failed to produce laughs and were incredibly cringe-worthy because they felt totally out of place, cheap, and childish.

Rampage is Brad Peyton’s big-budget B movie and a film that is perfect for anyone that is looking to have a good time at the movies. The mindless entertainment found in Rampage reminded me of those summer movies from the ’90s; the ones where I sat back, turned off my brain and enjoyed my bucket of popcorn and soda while being thrilled by the destruction occurring on-screen. 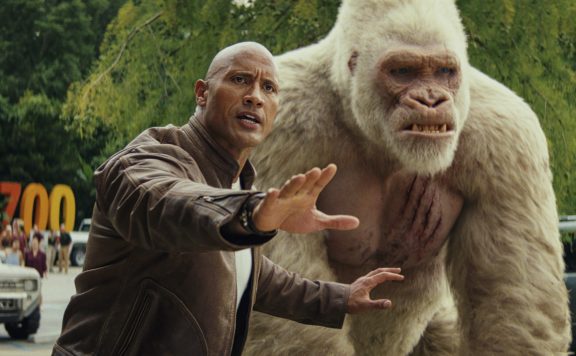 Rampage Reactions: What are Critics and Audiences are Saying About Dwayne Johnson’s Monster Movie
April 4, 2018