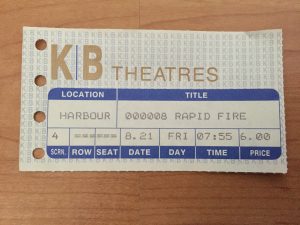 When Rapid Fire opened 25 years ago, I hadn’t even seen a Bruce Lee film yet. I was just interested in any new actor who could fight. I think I had seen Showdown in Little Tokyo on HBO or maybe I saw that after I fell in love with Rapid Fire. Either way, this vehicle pinned my action hopes to Brandon Lee.

The marketing certainly pushed the son of Bruce Lee angle, and Lee seemed in on it. The movie opens with Lee doing martial arts in a black void. He never fights with nunchucks but he uses sticks and poles in similar fashion. He certainly wasn’t avoiding martial arts, as he’d starred in some Hong Kong movies prior, a reboot of the TV series Kung Fu and played Dolph Lundgren’s sidekick in Showdown. If that’s what got people into the theater, they could fall in love with Brandon Lee like I did. He was my hero. 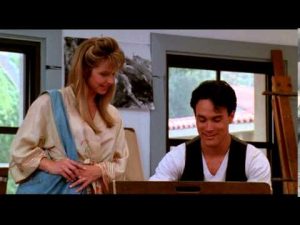 Brandon Lee was super charismatic in all the scenes between the fights, being flirtatious with the nude figure model and nonchalant as more and more corrupt bad guys revealed themselves to him. The chemistry with Det. Withers (Kate Hodge) was more perfunctory but that’s not his fault. There are greater movie sins than a formulaic love interest. 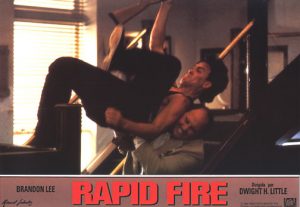 Brandon Lee had moves I’d never seen before. Years later I’d learn he was paying homage to Jackie Chan. Some of my favorite Rapid Fire scenes incorporate Jackie Chan moves, like kicking through a banister, kicking a table in a bad guy’s face and driving a motorcycle through a glass case. I’d never seen action like that before so I was thrilled to learn a few years later there was a guy who’d already made 20 more movies like this! (My discovery of Jackie Chan will be a future, far more thorough article.) 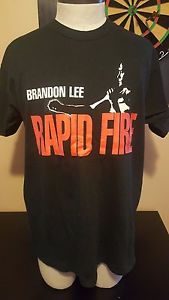 I wish I had this shirt.

He didn’t move like his father. He had his own style. He was acrobatic, he could use weapons but he was still putting on a show. Bruce Lee was such an efficient fighter he could end a fight in one punch, and had to be asked to slow down for film. It wasn’t reported whether or not Brandon was asked to slow down. Either way, it seemed Brandon was developing a screen persona that would be uniquely his. He poses, makes expressive faces and showed off his natural guns in tank tops.

The plot of Rapid Fire is rather inconsequential as it is in many star vehicles, action or otherwise. That’s not a criticism. When you have a star as magnetic as Lee or Seagal in his prime or Van Damme, you don’t want to distract from their magnitude by burning screen time on plot. 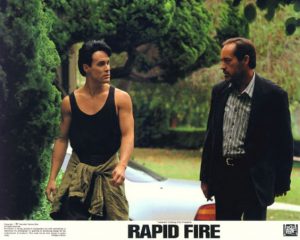 Jake Lo (Lee) is a college student who witnesses a murder at a party he didn’t even want to go to. Classic wrong place at the wrong time situation. If it were anybody else he’d be dead too (the police certainly can’t keep him safe). But since he’s awesome he can kill all the mobsters and their minions. He moves through corrupt FBI agents and Mace Ryan (Powers Boothe) who’s been on the case for 10 years, but really he’s moving from action scene to action scene. 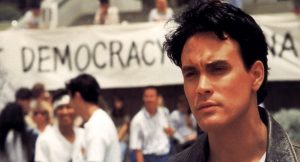 That’s the bones of Rapid Fire but they do color it in with some Asian flavor. Jake had been in Tiananmen Square with his family. That was only three years ago in 1992 and at the time I didn’t even appreciate what a big deal it was for a Hollywood movie to even address such a political event (in my defense I was 14). Jake believes his father died for nothing in Tiananmen and does not want any part of the protest group on campus.

There are parallels to Brandon Lee and what the world expected of him. The industry certainly wanted him to be his father. This story allowed him to play someone struggling with an even more serious Chinese-American identity. Lee probably didn’t mind if people wanted him to do Kung Fu. I mean, here we are, he’s doing it. He speaks a little Chinese in the movie too, so Lee is embracing his Chinese side (his mother is American) unobtrusively to the main attraction: Look at the star power of Brandon Lee. 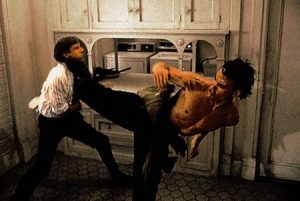 After Rapid Fire I couldn’t wait to see what Brandon Lee would do. I thought he could do anything: action, leading man, drama, comedy if he wanted. Sadly we would only ever get to see him do one more movie. The Crow showcases everything Lee could do even more in an emotional romantic fantasy horror thriller, yet I’d give anything for him not to have made it and still be alive today. I would rather it not have been made with anyone so no one died due to firearm negligence. 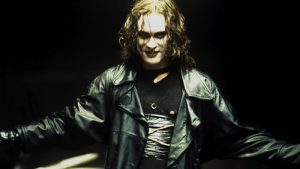 It was the first celebrity death that truly hit me. Most of the celebrities who’d died in my lifetime already seemed like people who had had careers long before I was born. It wasn’t just that Lee was so young, although that hurts the most. The fact that I was there when he’d debuted made it a very present tragedy. There was no looking back on Brandon Lee. It was happening right before my eyes. 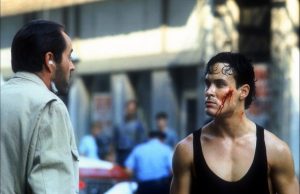 A lot of people only discovered Brandon Lee after the notoriety of that tragedy. I wish I could say I was there as early as Legacy of Rage but I wasn’t. I did see the trailers to Rapid Fire and decide that was a star I wanted to see, and the film launched him past Seagal and Van Damme in my heart.

It’s so funny to think how small my cinematic world was in 1992. I could rent Bruce Lee movies because he’d crossed over but the whole world of Hong Kong cinema was invisible to me. I was only aware of American movies, so when a new voice broke through I was excited, and Lee introduced me to many of the techniques that just weren’t being utilized in Hollywood yet. Even when Jackie Chan finally got a U.S. release in 1996’s Rumble in the Bronx, I had to search for video stores that may have carried a few of his Hong Kong movies. Same when John Woo started making Hollywood movies. Now most foreign movies are available streaming somewhere, and if not then a region free DVD or Blu-ray should only be a click away. 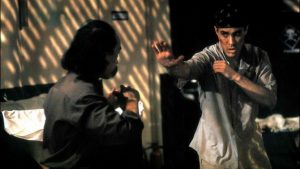 Even now that my world has been opened, Rapid Fire is still awesome. What Brandon Lee brought to a generic vehicle showed he was a true movie star. I’ll never stop wondering what would have been in his future. 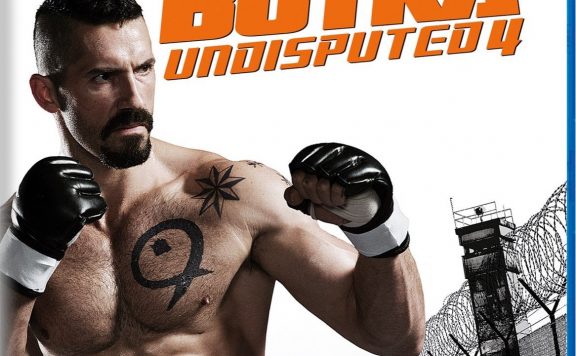 When Rapid Fire opened 25 years ago, I hadn't even seen a Bruce Lee film yet. I was just interested in any new actor who could fight. I think I had seen Showdown in Little Tokyo on HBO or maybe I saw that after I fell in love with Rapid Fir...
0
Average User Rating
0 votes
Please sign in to rate.
Cast:Brandon Lee, Kate Hodge, Powers Booth
Director(s):Dwight Little
Genre:Action