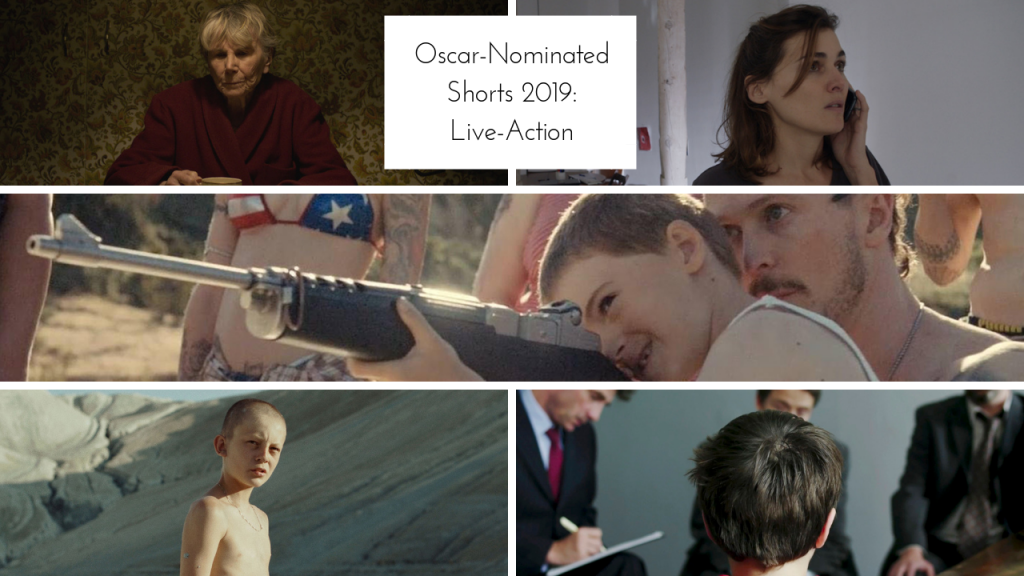 Just a week after questioning whether or not the short film nominees for the 91st Academy Awards would even be seen on television in my Animated Short Films post, we now have the answer, and it, unfortunately, means these live-action short films will not be aired in the traditional manner. That said, there’s a decent crop of short films to be found here, though I question the method behind singling out mostly features that place children in peril. As it stands, a variety of filmmakers from various countries have managed to realize dramatic stories in cinematic ways, making for a series of films that are serious, challenging, and promising as far as where their efforts can take them next. 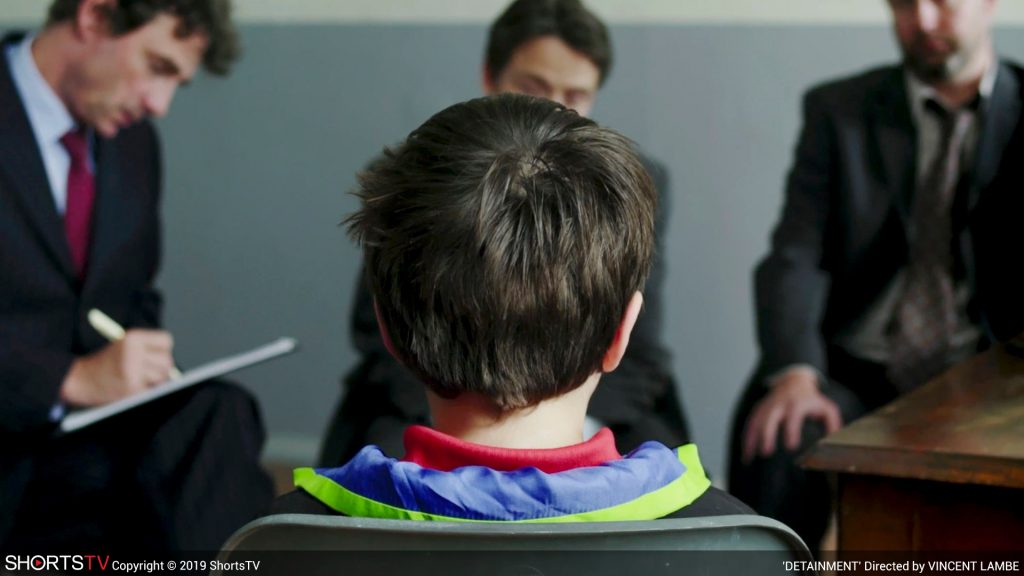 Is it necessary to do more than present facts stylishly? I will leave it up to the reader to read up on the controversy surrounding Detainment, as I have more thoughts stemming in different directions than whether or not it was okay to make this film. While acted well enough to be believable, with enough focus on the dramatization to certainly raise a viewer’s blood pressure and emotional composure, how far is too far. We watch a recreation of interviews with two boys who committed a monstrous act, and I couldn’t help but feel the film was verging on the exploitation of the subject. For all the glossy production values on display, it only adds up to so much when there’s little to explore. Part of the point was making a film based on the actual interview transcripts, but if I’m going to see a movie taking a look at such a horrific event, it may be time to see a take that goes beyond the tapes and inside of the minds of those who committed the act.

Synopsis: Police detain two ten-year-old boys under suspicion of abducting and murdering a toddler. A true story based on interview transcripts from the James Bulger case which shocked the world in 1993 and continues to incite public outrage across the UK today. 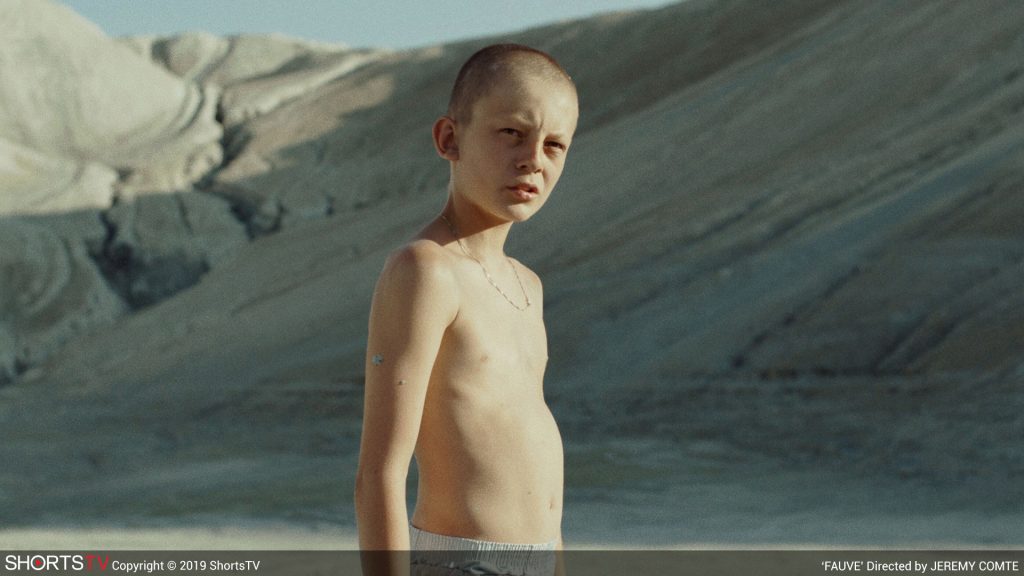 While the animation field was well-rounded enough to give me pause in selecting a favorite, Fauve easily wins for this live-action crowd. What begins as a simple series of pranks and competition between two boys, takes a thrilling turn when their playing around in an area featuring an isolated pit grow out of hand. The tension that builds from this shift in the story allows director Jeremy Comte to put his location to good use. The environment the boys are in suddenly takes a new form cinematically as far as we see desperate attempts to resolve a terrifying situation. I’m working hard to stay vague, but the use of imagery that encompasses cracks in the foundation and a specific callback in the final shot that brings things full circle make this a memorable film.

Country of origin: Canada
Language: French
Directed by: Jeremy Comte
Runtime: 17
Synopsis: Set in a surface mine, two boys sink into a seemingly innocent power game with Mother Nature as the sole observer… 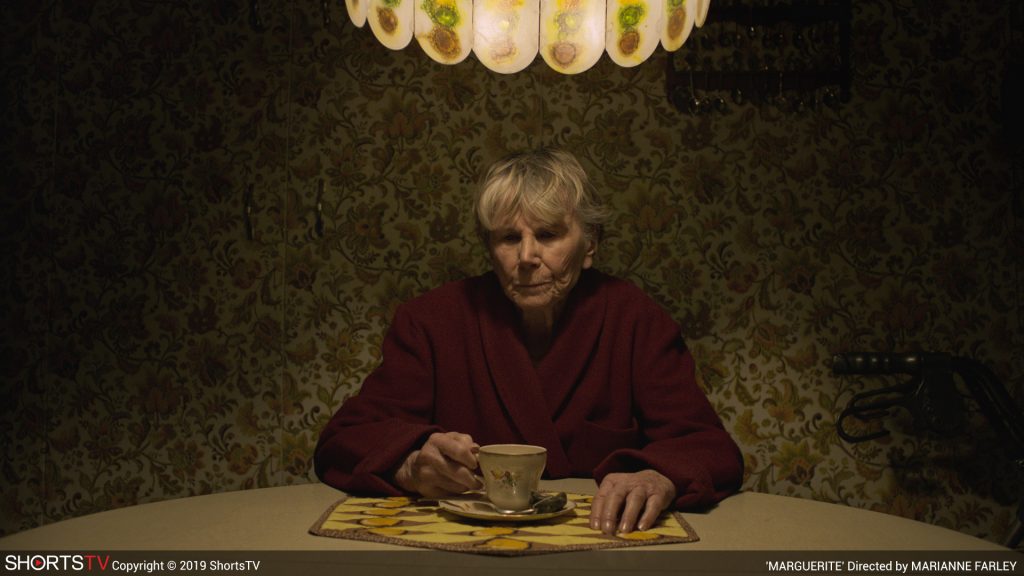 One thing I can say about Marguerite is that it’s different from the rest by not featuring any children. This story of an aging woman is more of an actor’s showcase, as it revolves around how she deals with her friendship with her caretaker and thoughts on her own past, once making a discovery. Shot in intimate settings, the camera rarely takes time to step back from the characters, instead placing an intense focus on Marguerite as she becomes reflective about her life. With one home serving as the single location, we get a sense of how production design informed the look of this film, going from harsher colors to a softer pallet. It works in pushing the story towards a positive conclusion.

Country of origin: Canada
Language: French
Directed by: Marianne Farley
Runtime: 19
Synopsis: An aging woman and her nurse develop a friendship that inspires her to unearth unacknowledged longing and thus help her make peace with her past. 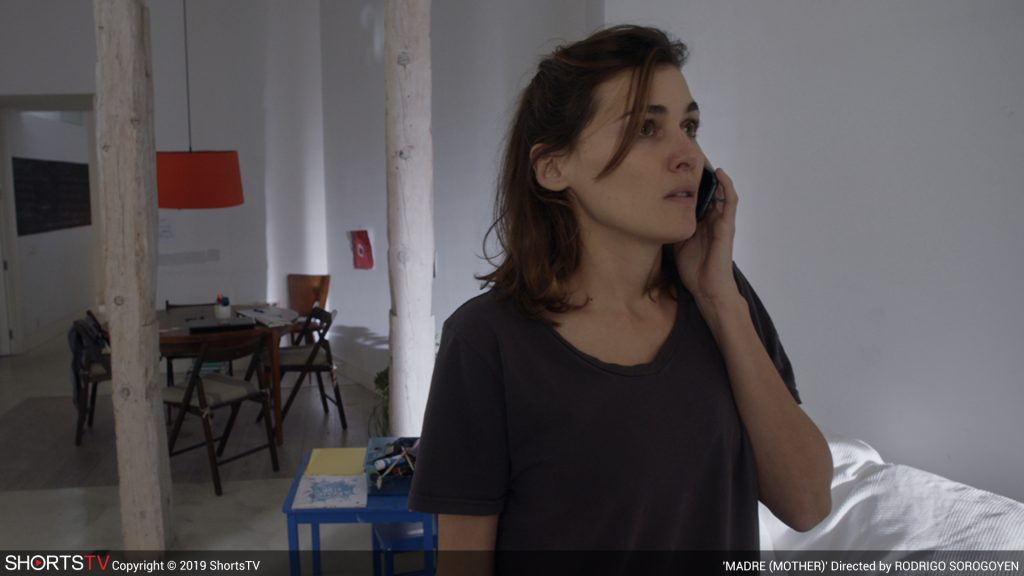 Here’s another story that relies heavily on the building of tension, only marred by serving as a terrific first act of a larger story. On a technical level, Madre sneakily becomes a clever piece of work, as we soon realize that much of the film has occurred within a single shot. This adds to the rise in the stakes, as a phone call goes from concern to wildly troubling. Watching the camera glide around a couple of rooms, as the two actresses do what they can to try to maintain control over the most stressful of situations, plenty is going on to play on the viewers’ minds. And then it ends. While the nature of a short film doesn’t always require a clear beginning, middle, and end, it’s as if director Rodrigo Sorogoven was merely pushing forward a concept, without a handle on the ultimate delivery.

Country of origin: Spain
Language: Spanish
Directed by: Rodrigo Sorogoyen
Runtime: 19
Synopsis: A single mother receives a call from her seven-year-old son who is on vacation with his father in the French Basque Country. At first, the call is a cause for joy, but soon it becomes a horrible nightmare when the child tells her that he is alone and cannot find his father who left a while ago. 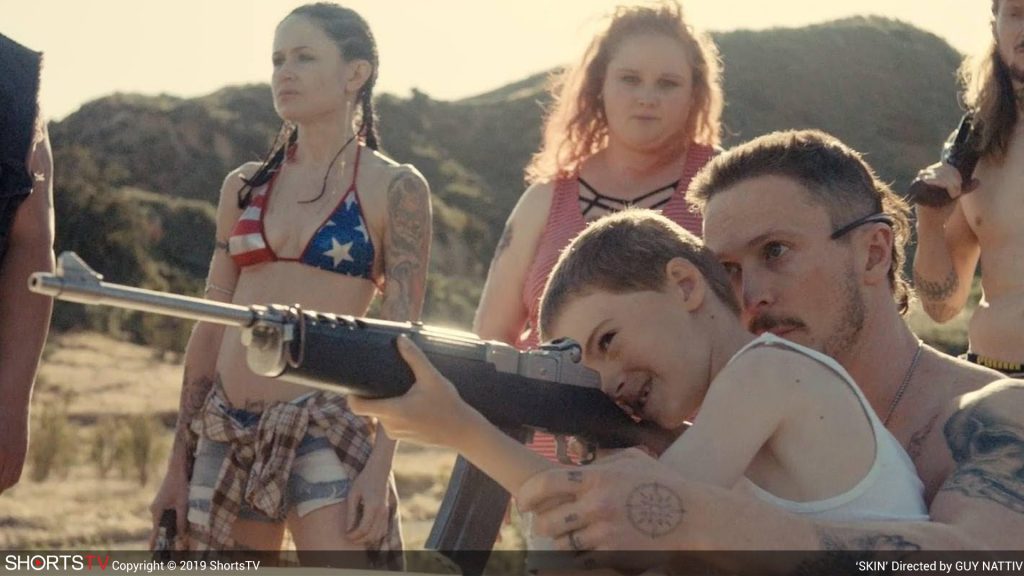 This short film is just wild enough to win the grand prize. The first portion focuses on a skinhead couple showing nothing but love and affection for their son. Inevitably, we must eventually see some encounter that leads to trouble and violence against a person who is viewed as different from them (in this case, a black man). Things grow wilder from there, as there is an unexpected form of retribution, utilizing body horror to the point of borrowing a track from the Under the Skin score to further make its point. Once clued into what is taking place, the film goes down a shocking but predictable path, which may as well cut to credits with the word “Understand?” pasted on the black screen. There’s a timely element to this film, sure, and the acting is unnerving in the ways fitting for the film. Still, the extremes Skin goes to border on silly, though I can’t say it wasn’t creative.

Country of origin: USA
Language: English
Directed by: Guy Nattiv
Runtime: 20
Synopsis: A small supermarket in a blue-collar town, a black man smiles at a 10-year-old white boy across the checkout aisle. This innocuous moment sends two gangs into a ruthless war that ends with a shocking backlash. 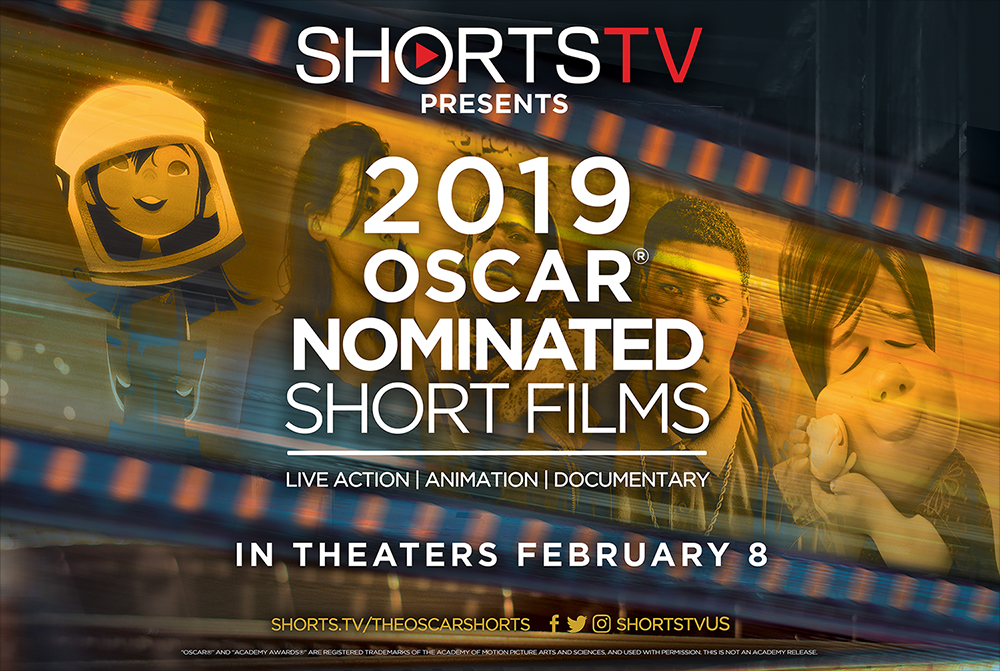 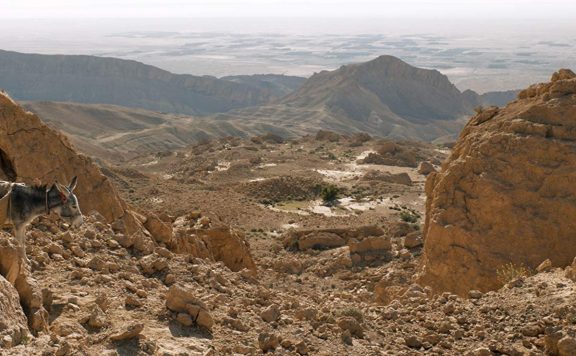 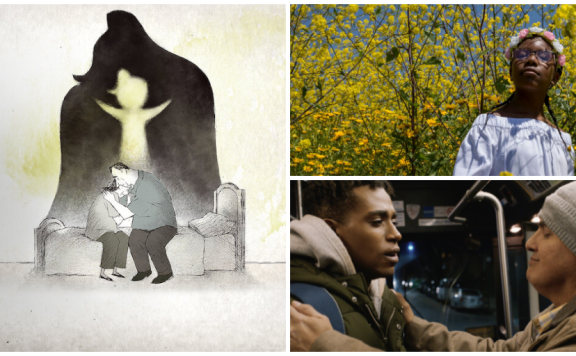 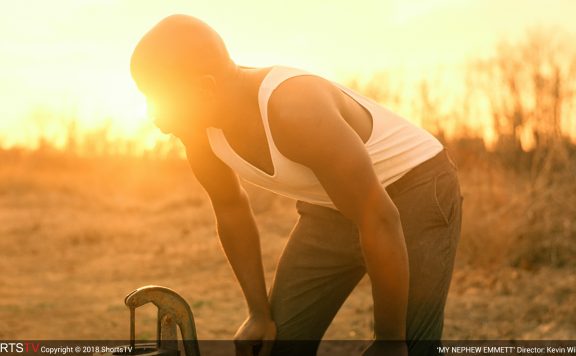 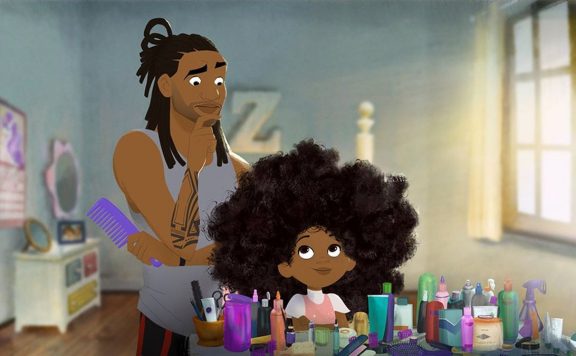