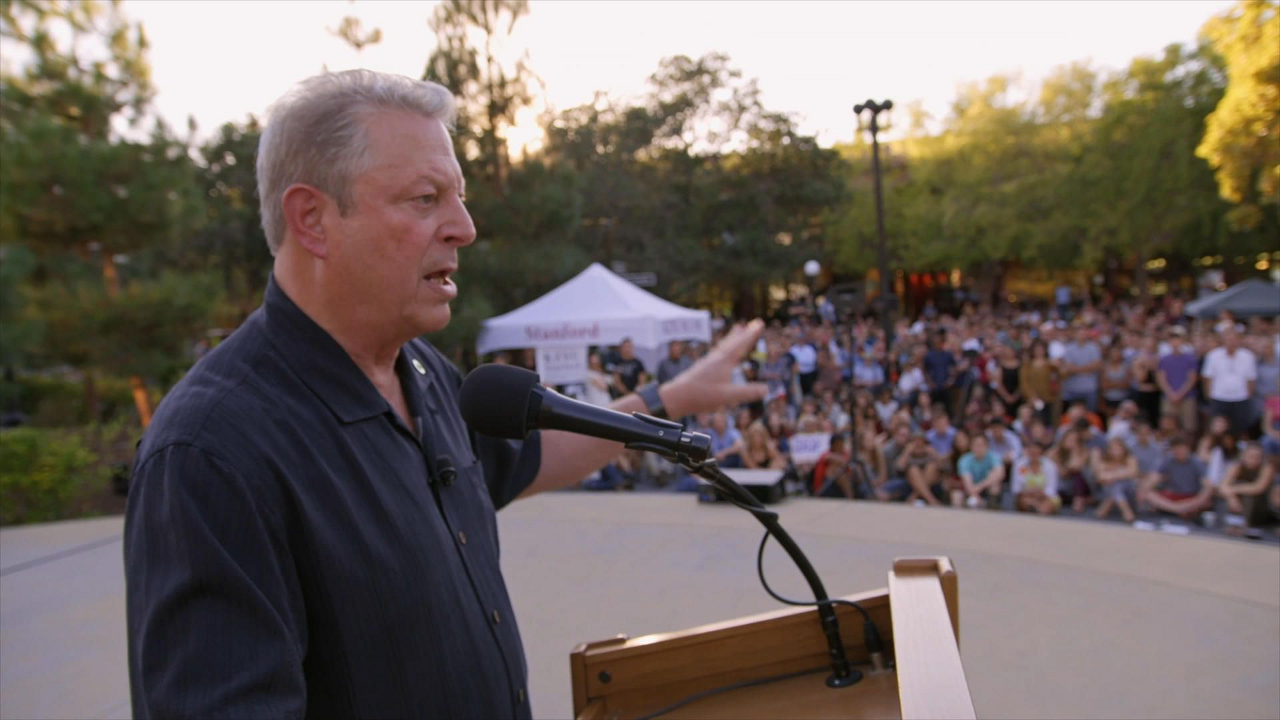 2006’s An Inconvenient Truth made major waves pertaining to Al Gore’s climate change crusade and his rhetoric offering greener solutions. The documentary even won the Best Documentary Feature as well as Best Original Song at that year’s Academy Awards. While that film’s ending pushed for its audience to recycle more and consider hybrid cars, there was no such distinctive conclusion to the global predicament. 11 years later, Gore returns with a most unlikely, yet necessary sequel, An Inconvenient Sequel: Truth to Power.

Like the 2006 documentary, the former vice president continues his campaign to educate citizens about global warming and climate change. The documentary depicts the situations as more dire than it was a decade ago. Naysayers of global warming litter the opening of the documentary via voice-overs. And it places Gore in a more fragile position than the previous documentary. Throw that aside and Gore is back with a vengeance in pushing his point across.

Back are the slideshows viewers of the first film are well-accustomed to. As Gore’s crunching numbers throughout the documentary, it’s understandable where he’s coming from. Add in asides of the Antarctic melting at an exponential rate and an increase in flooding and the argument become vivid. One of the talking points from An Inconvenient Sequel’s trailer was that the World Trade Center memorial site would be submerged. Lo and behold, the east coast endured Hurricane Sandy back in October 2012. It’s still a painful memory, affected by the storm six hours away.

While that’s one of the noteworthy recent disasters An Inconvenient Sequel brings up, the documentary never turns the terrors of Mother Nature into a spectacle. Though, Gore does highlight his trip to a flooded Miami, where his wading boots failed him before giving a speech. Otherwise, we have to look to the melting streets of India or the effects of the Zika virus on pregnant women.

Filling in the gaps of visual disaster, directors Bonni Cohen and Jon Shenk concentrate much of the documentary’s run time on the political maneuvering. For a majority of An Inconvenient Sequel, Gore is facing an uphill battle, especially since leaving office in 2001. The liberal and conservative divide is underplayed for the most part, hardly painting the opposing conservatives as a terrible obstruction. However, Gore refers back to the controversy of the 2000 election against George W. Bush and the ramifications it’s had on his cause. Wasn’t there enough content dedicated the last time around?

Nevertheless, everything that An Inconvenient Sequel builds up in its climax is the 2016 Paris Climate Agreement. There’s much at stake when all the world leaders are discussing climate change and global warming. Even with Barack Obama, Angela Merkel and Vladimir Putin tackling the timely topic, the one causing much distress is the heads of India. The Indian government has no interest in working with the western world. Gore offers his persuasive tactics, but the confrontation can be understood from both parties. Trying to move the dial of compromise, Gore makes some phone calls to make a deal more beneficial to both his cause and India.

An Inconvenient Sequel premiered back at the 2017 Sundance Film Festival. Since then, the film has been edited to reflect Donald Trump’s withdrawal from the Paris Agreement in June. The recent edits do make Trump out to be quite the antagonist to the climate change crusade. It’s a jarring departure from a documentary that never packed its punches toward the political opposition. Granted, much has changed from its January premiere to now. Still, as tension boils on Capitol Hill, one has to wonder if a third chapter is on the horizon. An Inconvenient Trilogy anyone?

Global warming and climate change are certainly touchy and timely subjects. And while it concentrates heavily on Gore’s missions, it subdues any opposing theories minus Trump’s “low energy” and “fake news” rhetoric. Some of that feels swept under the rug, but that’s all in the framing of a compelling documentary.

An Inconvenient Sequel is an eye-opening sequel that’s here to engage believers of Gore’s environmental ideals back to the front lines. It’s that rare well-crafted documentary sequel that can’t be missed. Even if you’re not gung-ho about the climate change campaign, it’s still a quite fascinating watch.