I am amazed at how remarkable past human achievements can still be in a time where there’s a constant need to play down specific accomplishments or cast a veil of cynicism over potential groundbreaking discoveries. Apollo 11 is a documentary focused on the historic 1969 lunar mission. It consists solely of archival footage from that time, with minimal on-screen text and a few simple animations to add some context. The key to its success is not in providing new information but showing perspectives that rarely, if ever, have been seen by the public. As a result, here’s a movie that presents an exciting look at what was accomplished by human innovation on a massive scale.

Director and editor Todd Douglas Miller is the man behind this documentary. With access to hours of footage on unearthed film reels, he was able to assemble a 90-minute film putting focus entirely on the Apollo 11 space mission. Going for a unique approach to an event that has been well-documented already, let alone dramatized in movies as recent as First Man, which arrived in theaters a year prior, Douglas found a fresh approach by way format and presentation.

The footage being held at the National Archives and Records Administration (NARA) was shot on 65-mm film. Appropriately, Apollo 11 is being presented as an IMAX release, which is how I viewed the film. It’s a real marvel to behold, given how much a viewer can take away from seeing a massive rocket being moved to its launch position. Shifting away from the desire to show the old footage and iconic imagery that’s been aired plenty of times, Douglas found an ideal approach to this latest look at the famed moon mission. 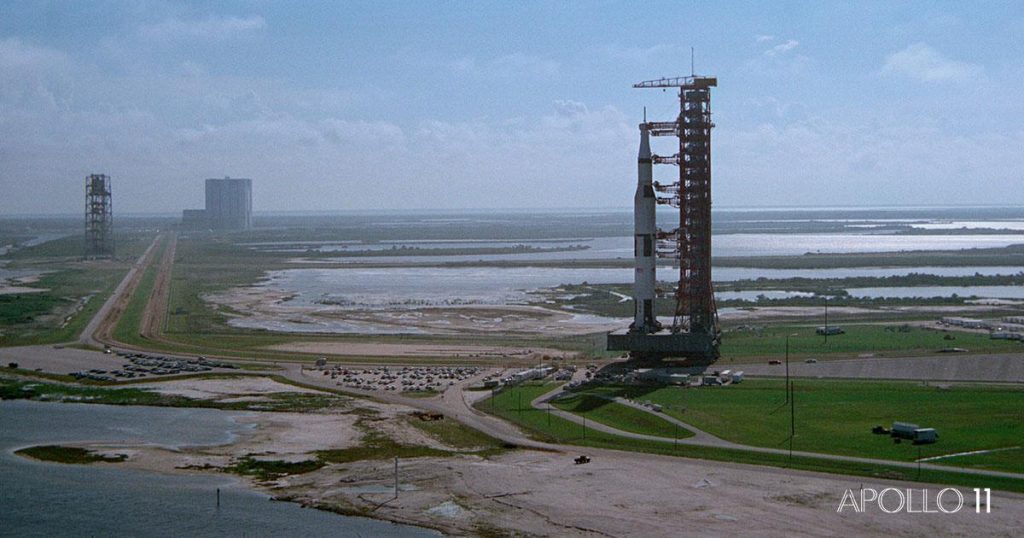 It is indeed coming at the right time too. Given the astounding visual recreation seen in Peter Jackson’s They Shall Not Grow Old, the cinematic intensity of the Oscar-winning Free Solo, and the emotional impact of Morgan Neville’s Won’t You Be My Neighbor, Apollo 11 is another entry in a line of recent documentaries that find ways to put life on display in a creative manner to best emphasize where an individual’s place may be in the world (even when traveling away from it). Having over 60 reels to work with means having the ability to build a specific narrative, and it’s fantastic to see just how exciting the one developed for Apollo 11 can be, given that we already know the successful nature of the mission.

Without the use of talking head interviews or narration, Douglas has assembled a film that depicts the time from a couple of days before launch to a small amount of time after it. Everything viewed is footage shot by cameramen embedded within mission control, reporters just outside the area, mounted cameras on the spacecraft, or even the astronauts themselves, Neil Armstrong, Buzz Aldrin, and Michael Collins. And for the sake of this film, the footage has been brilliantly restored, allowing for an incredibly well-aged image. Considering that Apollo 11 has arrived in time for the 50th anniversary of the mission, it’s a pretty incredible tribute, to say the least.

Not relying on the standard tropes that can come with this footage means getting to see perspectives not usually highlighted. As a result, while some of the footage is clear enough to think it could have been shot yesterday, the film is showing off exactly what 1969 looked like. Sure, most of the focus is on the staff in mission control and what’s going on with the astronauts, but we also see the crowds who gathered to watch the launch — organized in viewing areas and parking lots across the water from the launch pad at the Kennedy Space Center. Seeing the excitement of those people, along with the general attitudes of the time is such a wonderfully human way of how to best capture the moment. 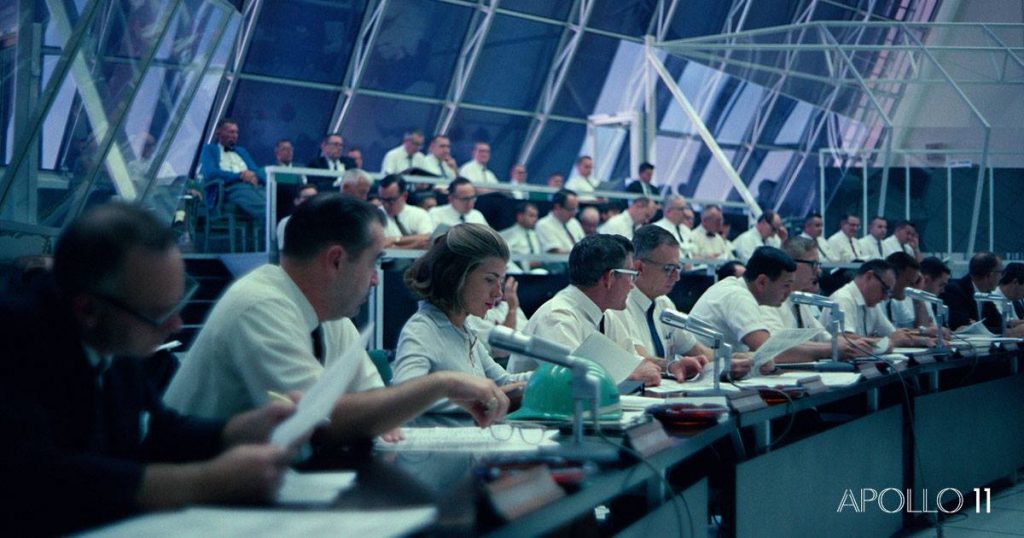 Seeing the spectacle of the launch is even more tremendous. Again, already knowing this mission was a complete success is beside the point when it comes to seeing the countdown, or watching the various stages of the shuttle exiting earth’s atmosphere, or seeing the module touch down on the lunar surface. These are exhilarating moments that don’t need to be heightened for dramatic effect, even if Matt Morton’s brilliant score does all it can to add a significant level of emphasis to what we are seeing.

Being on the moon itself is also a unique experience. To do something new with this moment in time is almost one of the most difficult of challenges, and yet the power of the storytelling on display doesn’t require Apollo 11 to lean hard on a radical new approach. We watch footage of Armstrong and Aldrin from a couple of angles, sometimes seeing a frame every second, mainly to get a sense of the tasks being done by two men that have just accomplished one of the wildest things in human history. It may amount to collecting some rocks, but hearing mission control comment on heart rates of the men is both humorous as well as a fun piece of insight into a possible state of mind. Flashing photos of the astronauts’ families around the time of the launch is another creative choice to help accomplish this. 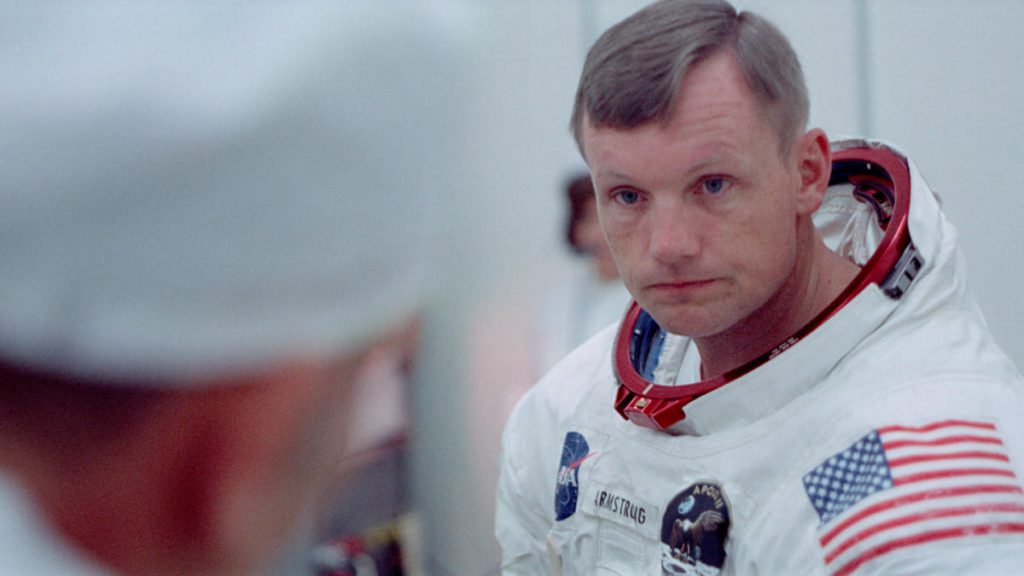 With very little in the way of commentary, Apollo 11 is designed to thrill and astound thanks to the remastered footage on display, with any reflection coming out of the viewer’s thoughts. There is no commentary here, with the film only coming close by way of showing JFK’s speech early on, as far as what this sort of effort could mean for humanity as a whole. Even seeing the footage of Nixon speaking with the astronauts is presented as genuine praise for what has been accomplished, without feeling loaded in any way.

It’s hard to imagine what can be done on this scale at this point that could truly unite people as far as celebrating the immensity of the achievement. Apollo 11 shows a time that may be rooted in Americana but still allows for a scenario that can be viewed by all as a testament of what innovation, ingenuity, and intelligence can accomplish. That fact that this mission has an aspect so visceral (hurling a massive rocket into the sky to land on the moon) means it can still be exciting to watch. This documentary continues to deliver on that level of spectacle, and it looks excellent showing off that one giant leap for all of us. 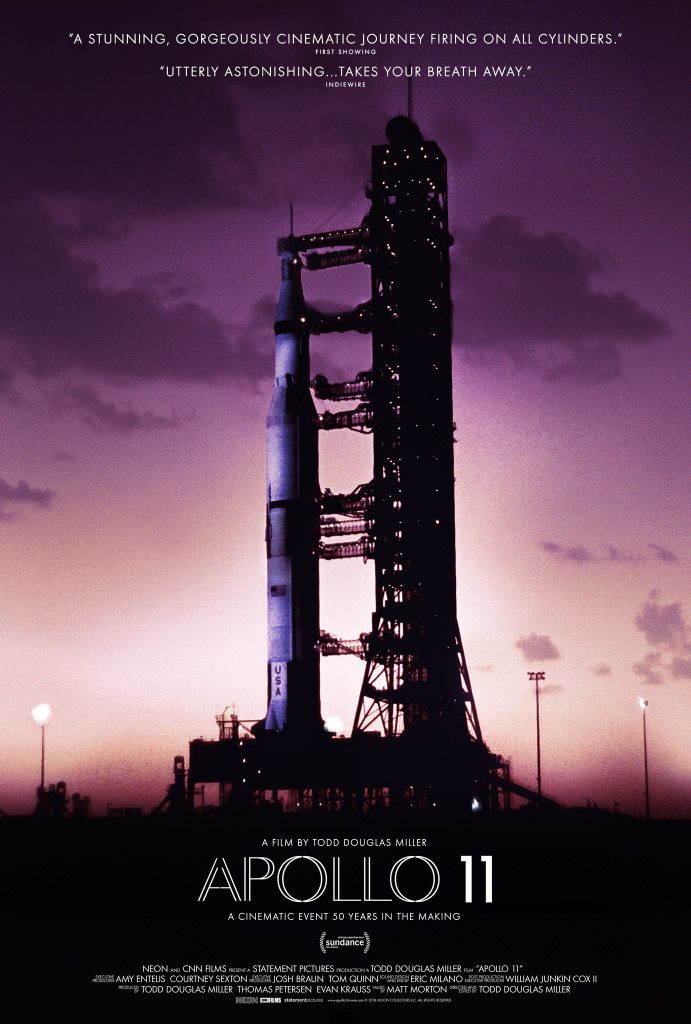