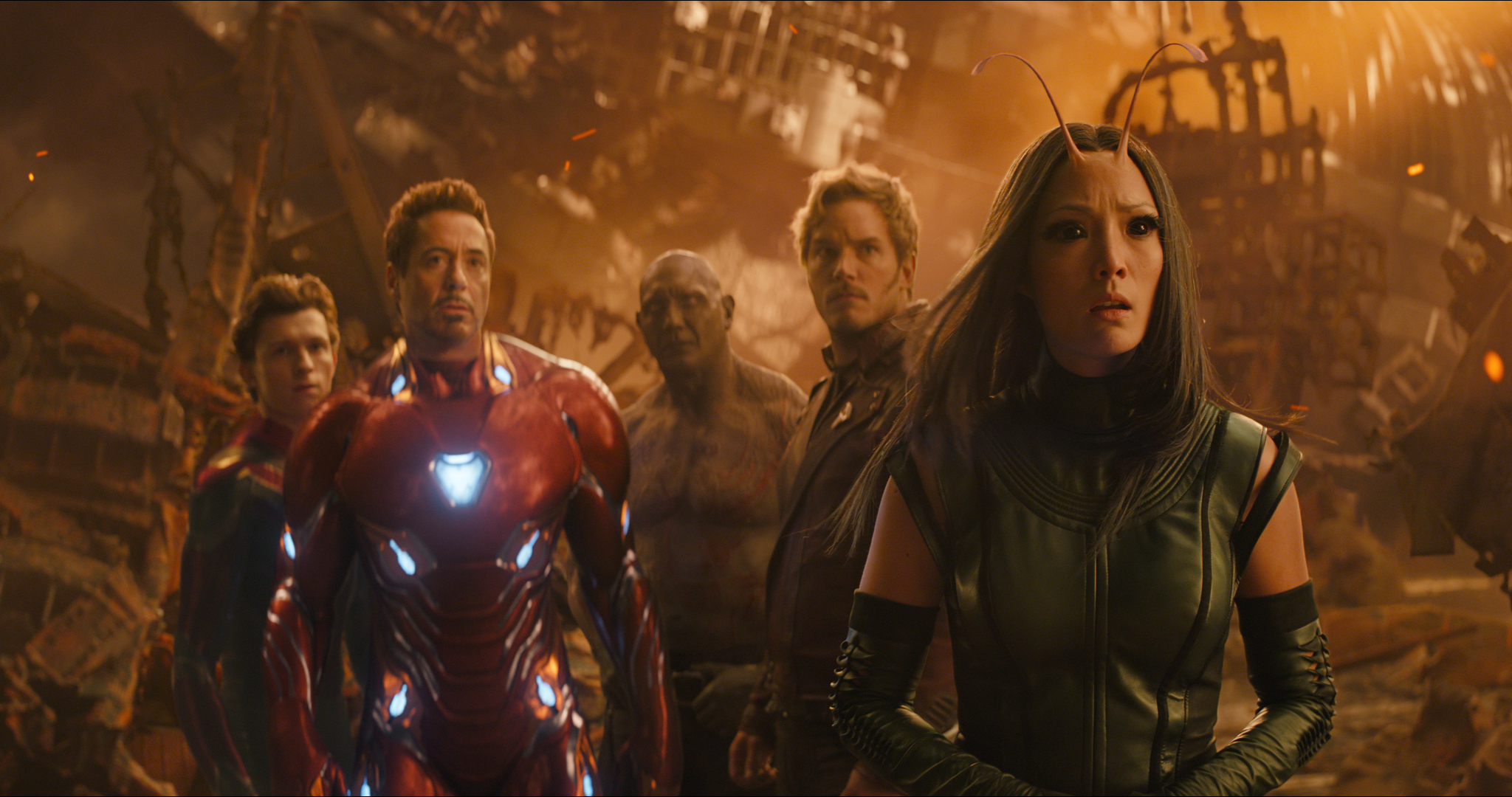 The Marvel Cinematic Universe has always attempted to make three things work in their films: characters, stakes, and balance. Avengers: Infinity War is no different. It’s a massive movie, one of the most expensive films ever made, but its value comes from how much we care about the characters, whether or not we feel the weight of the universe on their shoulders, and finding a balance of that drama with the entertainment value of seeing comics come to life. It is a credit to the ten years of work done by Marvel Studios to develop a solid track record building up to this point. The eighteen previous films have paved the way for something like this, and while there are some issues, this is the sort of epic spectacle film that tries very hard to make those three things continue to work.

While there are no less than twenty major characters to keep track of, the actual plot is relatively straightforward. After multiple years of pulling the strings of some menacing foes, the mighty Thanos (Josh Brolin) and his henchmen are now hunting down the Infinity Stones. These are the McGuffins that have driven the plot of several other MCU features such as Captain America: The First Avenger, Thor: The Dark World, and Guardians of the Galaxy. With an understanding that possessing all the Infinity Stones could destroy the universe, the broken up Avengers, Doctor Strange, Black Panther, and the Guardians will have to team up to stop Thanos.

To make this clear, anyone who is a fan of the MCU is going to enjoy this movie. Even those who may not have caught every one of these features, but does appreciate this modern era of superhero cinema will have enough to engage with. Infinity War is an action spectacle, driven more by plot than character, and full of special effects and one-liners that emphasize why we already genuinely like this massive cast. So despite having so much mythology attached to it, Infinity War is so simplified that it does not require full knowledge of every single aspect to understand what is taking place. This is mainly a credit to where the focus lies mostly. It also speaks to the difficulty in managing so many characters. 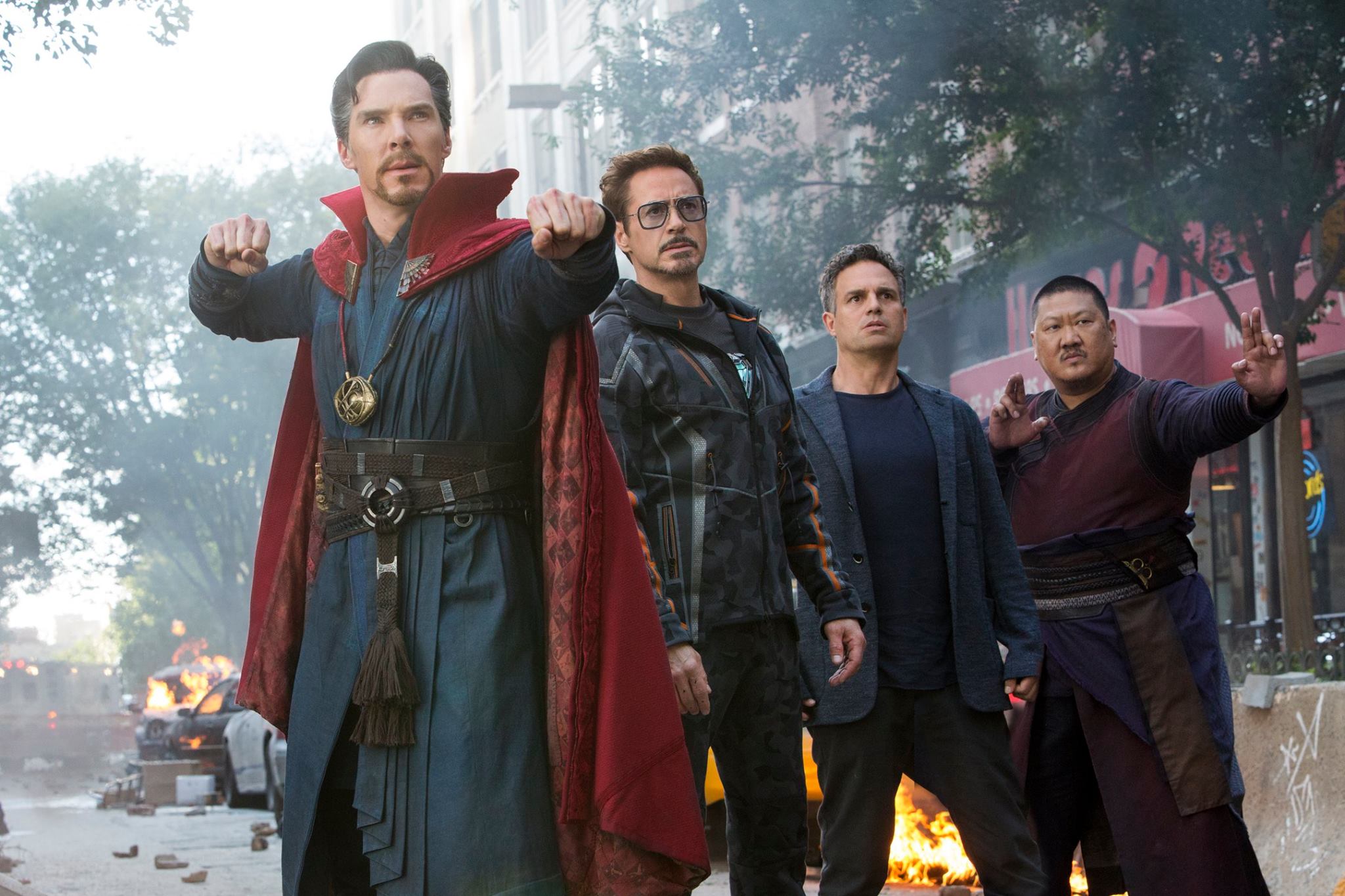 To tell its story, the film has the cast split into groups. By doing this, it makes Infinity War feel a lot like a series of comic book issues coming to life. Watching a chunk of time spent with Tony Stark (Robert Downey Jr.), Doctor Strange (Benedict Cumberbatch), Wong (Benedict Wong), Bruce Banner (Mark Ruffalo), and Peter Parker (Tom Holland) feels like reading through a cool issue of a trade that combines the powers and personalities of all these superheroes, before ending and moving on to the next grouping. The film feels a bit episodic because of this, but never unclear as to what needs to be accomplished.

What works well in Infinity War’s favor is the amount of time spent with Thanos. It’s no secret the MCU has been criticized for the quality of its villains. Outside Tom Hiddleston’s Loki, Michael B. Jordan’s Killmonger, and Michael Keaton’s Vulture, we’ve primarily seen lots of talented actors get covered in makeup and CG for the sake of power and ego-driven villains who are forgotten pretty quickly. I’m not going to say Brolin has instantly become the best villain of this series, but I did find him compelling to watch. Despite the horrible things he is responsible for and the one-sided reasoning he has as motivation, Thanos is given enough of a personality and a level of humanity that had me understanding him. The strange thing is, this is a movie largely stripped of character work, aside from Thanos.

Sure, the characters interact in a way that reflects what we already know about them, which also means getting plenty of humorous moments in a movie that could easily be played as deadly serious as possible, but this isn’t about challenging who it is that these people are. There are some introspective moments, such as a conversation between Thor (Chris Hemsworth) and Rocket (Bradley Cooper).  Moreover, the actors are certainly allowed to shine (MVPs include Hemsworth, Cumberbatch, and Zoe Saldana), but this is a film really focused on how to stop an outside threat, as opposed to focusing on what is inside everyone. With so many people to keep track of, many are clearly around as a reminder that they are a part of this huge thing, with a few monologues or exchanges to benefit them (Chris Evans, Chadwick Boseman, and Scarlett Johansson come to mind). 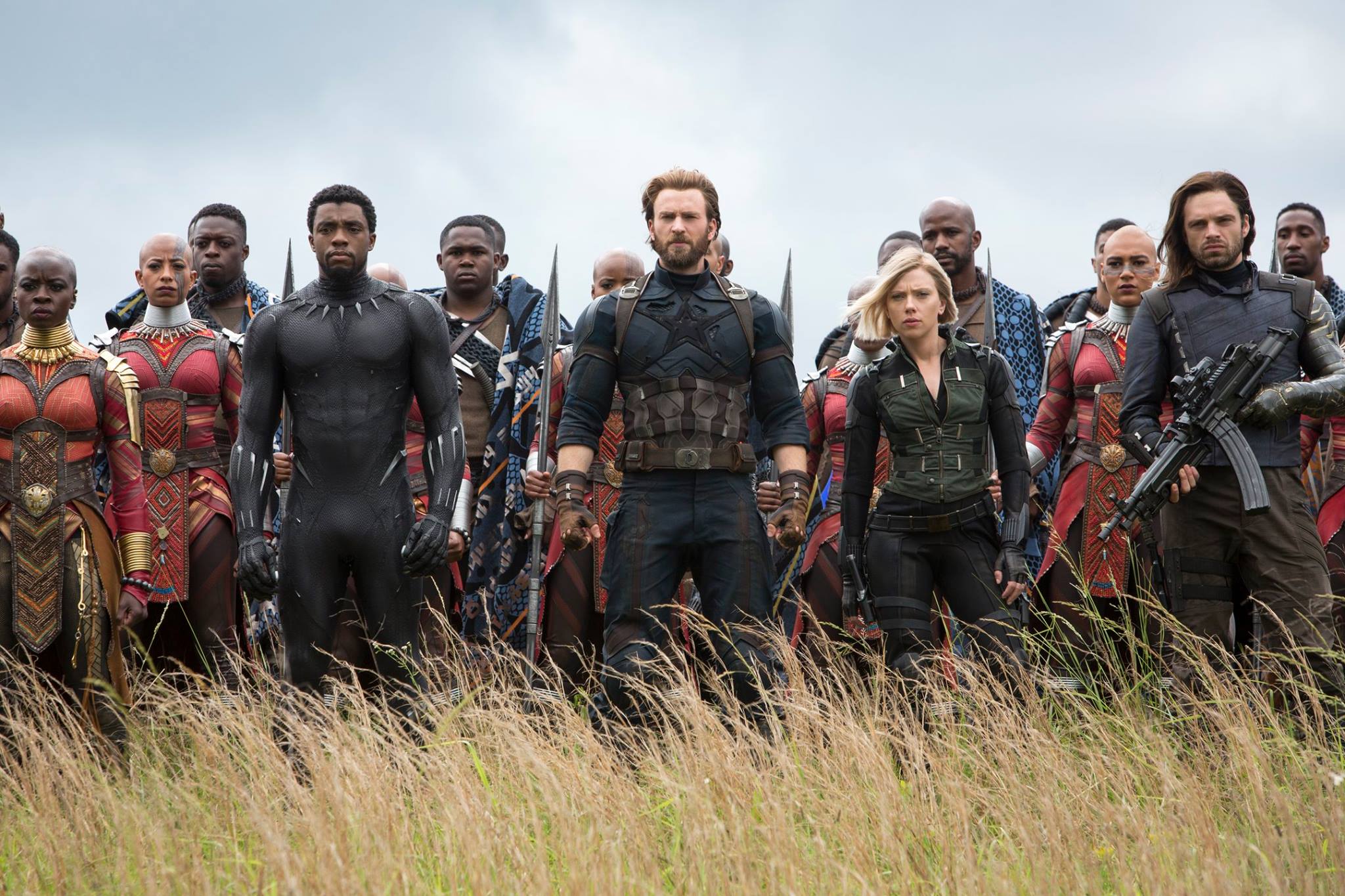 With that said, there’s another reason this film doesn’t reach peak MCU heights. Despite having an all-out action spectacular making up the extended third act of this two and a half hour movie and an ending that packs an emotional wallop as far as what is taking place, it’s a cliffhanger that you know will be resolved. That’s the thing about balance and stakes, the one-liners can be hilarious in the midst of drama, and the universe may be at risk, but the fight and movies will go on. Knowing full well that Avengers 4 is arriving a year from now to undo certain things, and that the MCU will continue until superhero films go the way of the western, the extent of what takes place becomes more interesting in theory than in practice.

I certainly can’t help but be intrigued by what will be taking place next, especially since there is potential in the next Avengers film to make Infinity War better in the long run. I think of this film in the same way I think of Kill Bill Vol. 1. There’s a movie that sacrifices character (mostly) for the sake of wild action sequences, one-liners, and basic setup for what’s to come. This is the very reason I prefer Kill Bill Vol. 2, as it delivers on the epic journey Uma Thurman’s character, The Bride, must go on as a person and not just a warrior. If Avengers: Infinity War Vol. 2 can show us how the characters involved genuinely function as people, in the midst of resolving a situation spurred on by this current first half, then we will have over three hours of a comic book movie that completes a long-running arc in quite the unique manner. 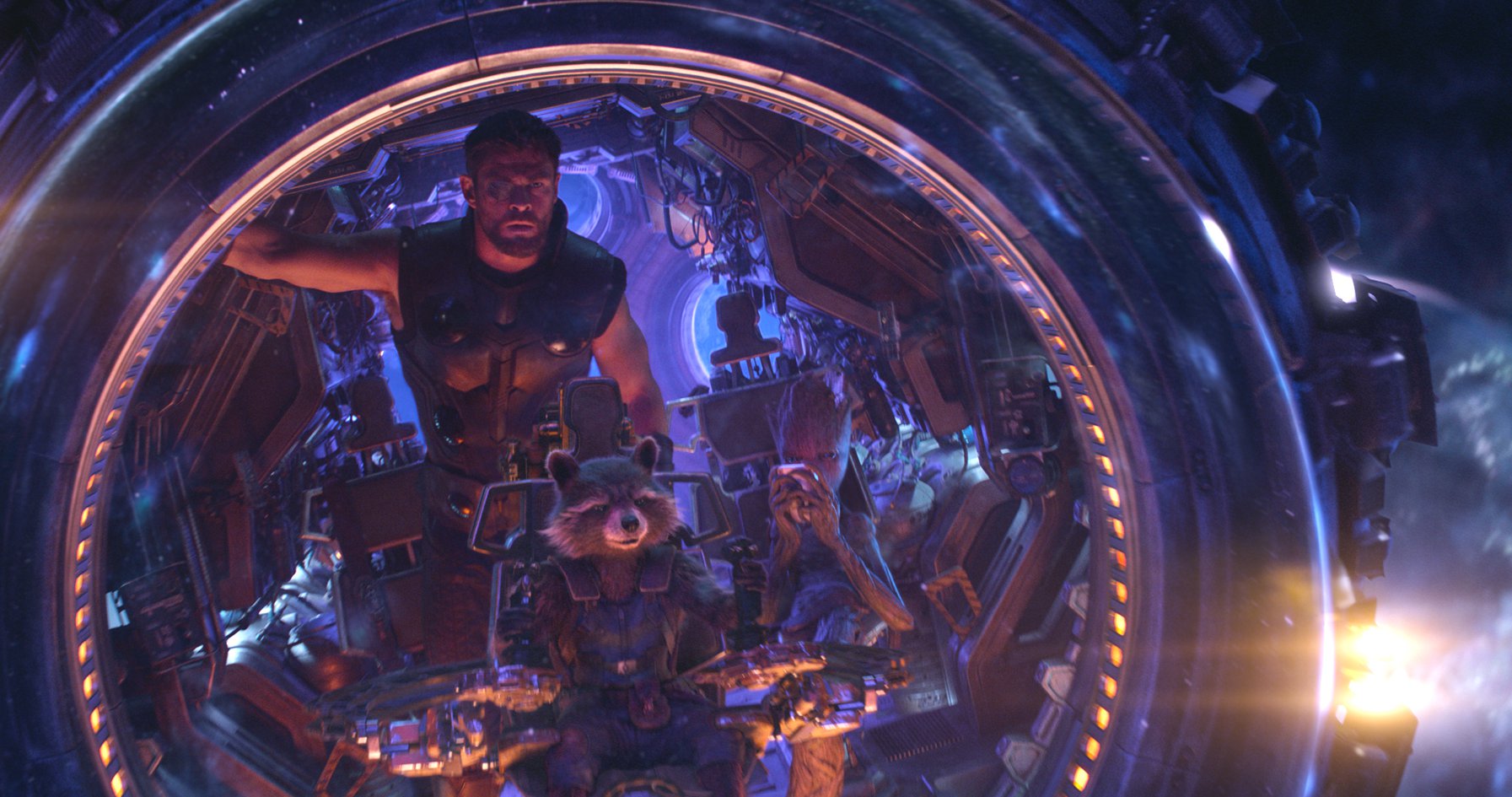 Highlighting the word “comic book movie,” however, brings me back to just how seriously we should be taking all of this. Avengers: Infinity War is an incredibly entertaining movie, regardless of how I fault the directions it chooses to take. Perhaps it’s missing the touch I enjoyed in writer/director Joss Whedon’s first two Avengers films. Still, directors Anthony and Joe Russo, and writers Christopher Markus and Stephen McFeely have indeed found a way to deliver on the spectacle while keeping track of so many heroes (to say little of the somewhat jumbly variety of the visual direction and attempts to juggle tone).

In an attempt to stay spoiler-free, this whole thing may sound a bit more negative than intended, but just know Infinity War is the sort of blast audiences want, even if they’ll be left in something of a state of shock by the end. Thanks to the efforts made to group up these characters, while not overdoing it on the plot, the film never feels overstuffed. Instead, we get a lot of wish-fulfillment moments of what it would be like to see specific characters fighting and quipping alongside others. There’s also a compelling villain guiding this whole feature. Infinity War may not be the best MCU or summer movie, but it may be The Most summer movie, and it does not lack in entertainment value. I mean, c’mon, they have a Hulk! 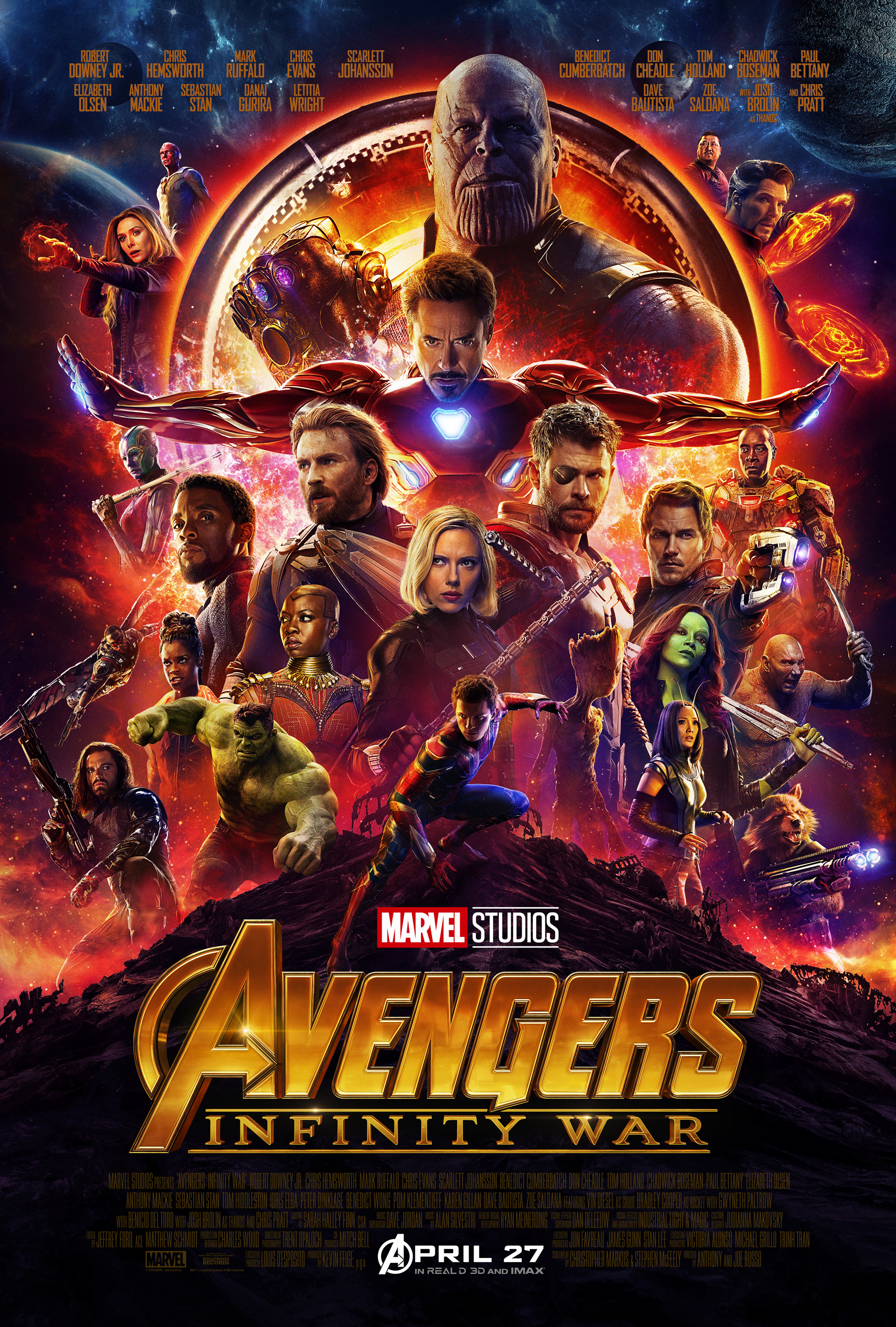