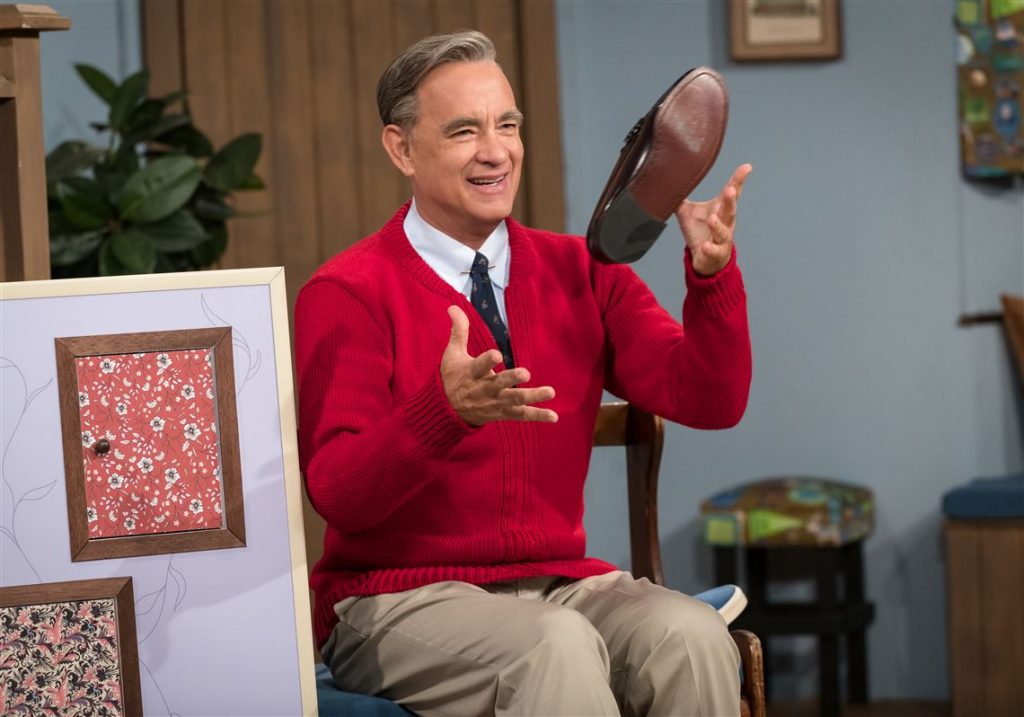 With only a year having passed since 2018’s well-received documentary, Won’t You Be My Neighbor, which covered the life and philosophy of Fred Rogers, some may have wondered what a dramatized biopic about the man could accomplish. While moviegoing audiences could use more heartwarming individuals to focus on these days, how could A Beautiful Day in the Neighborhood truly expand on Mr. Rogers in a meaningful way? The trick was simple – don’t make a film about Mr. Rogers. Here’s a movie that cleverly finds a way to feel like an expanded episode of Mister Rogers’ Neighborhood that relies on how Mr. Rogers could come into the life of someone else, help them, and teach some lessons as well.

Inspired by the Esquire article “Can You Say… Hero” written by journalist Tom Junod, A Beautiful Day in the Neighborhood is focused on the life of a fictionalized version of said author. Matthew Rhys plays Lloyd Vogel, a jaded man assigned to profile Fred Rogers (Tom Hanks). While Lloyd essentially serves as an entry point, we come to learn a lot about what he is going through, and how he’s dealing with being a husband, a new father, and an estranged son to his troubled father (Chris Cooper).

The film cleverly uses Mr. Rogers’ show as a framing device. We watch the movie introduced to us through Hanks’ depiction of Rogers, setting up a story focused on how Lloyd can improve. Even better is the use of miniature sets modeled after and inspired by the “Neighborhood of Make-Believe” serving as establishing shots of New York and Pittsburgh, and other fun choices to pull us into the world of Mr. Rogers, while still telling a separate story that happens to involve him. 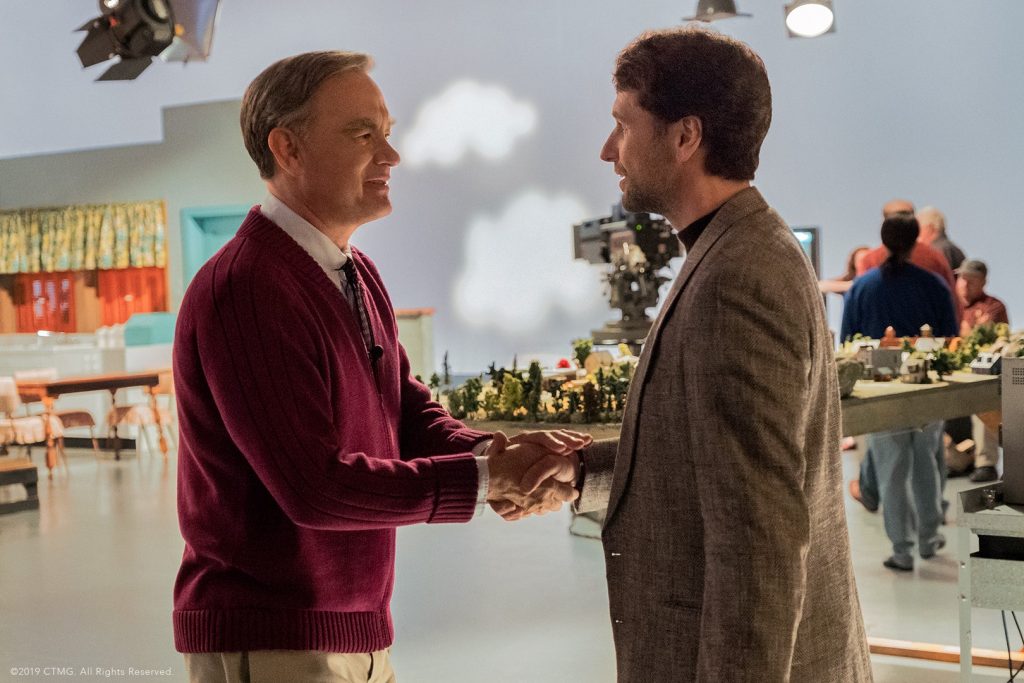 Yes, things do take a turn once Hanks’ is introduced as Rogers, who finds just the right notes to play as well. One thing to keep in mind is how Hanks is not exactly a transformative actor. He’s a terrific performer, but that comes from how he takes on mannerisms, dialogue, and the qualities required to form a character in presentation. It’s important to note this because Hanks does not look like Mr. Rogers. He looks like Tom Hanks. Rogers has the sort of tall and skinny frame matched with a forgiving face. Hanks is made up to seem familiar, but the performance works because of how he relies on the details of the man’s personality, rather than a physical transformation.

Making a film about Mr. Rogers was always going to be tricky in terms of casting. An unknown actor risks having an audience reject an impression lacking the gravitas of one of America’s most well-liked individuals. Having Hanks in the role could seem obvious, but it’s also necessary. He can bring warmth, and even if distracting, it’s the presence of someone with seemingly endless limits of sympathy, generosity, and the ability to care. Fortunately, inhabiting this role helps allow the film some comedic beats to play against Lloyd’s cynicism.

In approaching the film this way, director Marielle Heller (Can You Ever Forgive Me?) is able to not only capitalize on some stylish ambitions to show why the movie isn’t just another biopic but find interesting ways to reveal the kind of person Fred Rogers was. While not focused on the man’s backstory or details surrounding his personal life, children, or marriage, the way he interacts with Lloyd reveals plenty about the man. Overloading Lloyd with his niceties, if anything, reveals how closely he keeps himself guarded against those hoping to find out unexpected information concerning the man who’s passionate about never losing childlike wonder. Rogers’ persistence can even border on irritating, as we see in a moment where Daniel Tiger makes an appearance, only to be rebuffed by Lloyd. 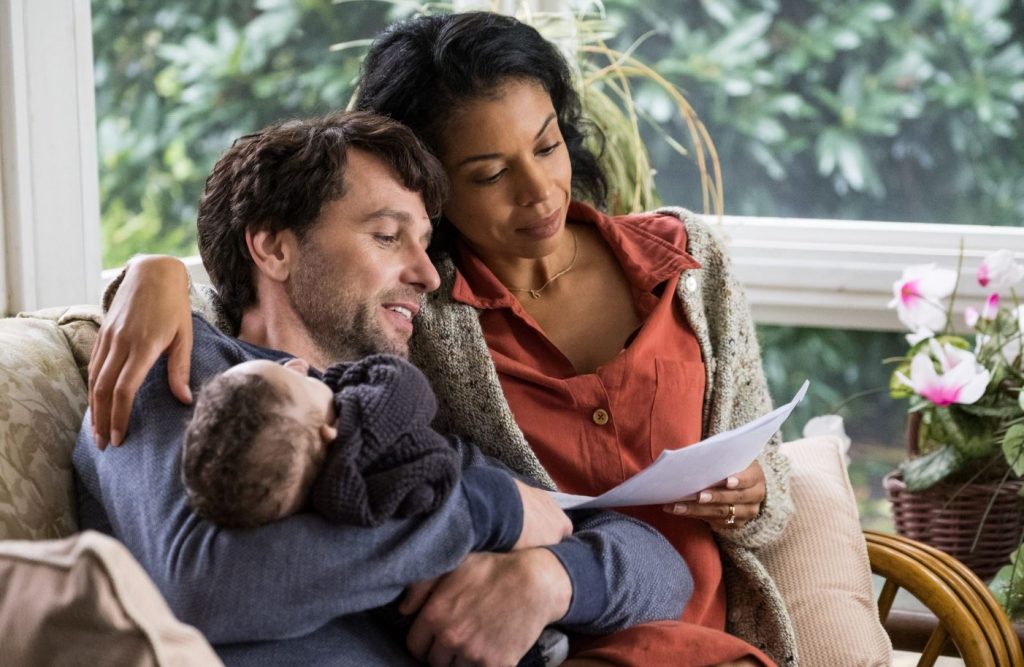 By doing this, the movie risks making Lloyd too unlikable as a character, but Rhys is fully able to keep Lloyd grounded through his performance. The clashing personalities make his relationship with Rogers one you look forward to seeing take a turn for the better, once the man gets why it really isn’t an act. At the same time, Rhys shares good chemistry with Susan Kelechi Watson, who plays his wife, who is as patient as she can be, while not letting things slide either. More crucial are the interactions with Cooper as Lloyd’s father, Jerry.

One could almost see this plotline as an adult afterschool special, but the two actors are terrific in their scenes. So much unspoken tension makes up their early interactions, with Cooper showing a man clearly attempting to make his past misdeeds right, despite a level of anger sitting right under the surface. This has rubbed off on Lloyd, who is not an angry person, but has issues to sort out due to the toxic relationship he has had with his father.

Again, incorporating these aspects pushes Mr. Rogers to the sidelines in a way, but the presence of the man is all over the film. It allows for many nice scenes, such as a bit where Lloyd and Rogers hop aboard the subway, and all the passengers share their admiration by singing Mr. Rogers’ theme song. Other fun comes from watching the filming of Mister Rogers’ Neighborhood, which allows the audience a peek behind the scenes, dealing with the peculiar nature of Rogers, and the crew members masking their frustration, knowing the end result will work out for the best. 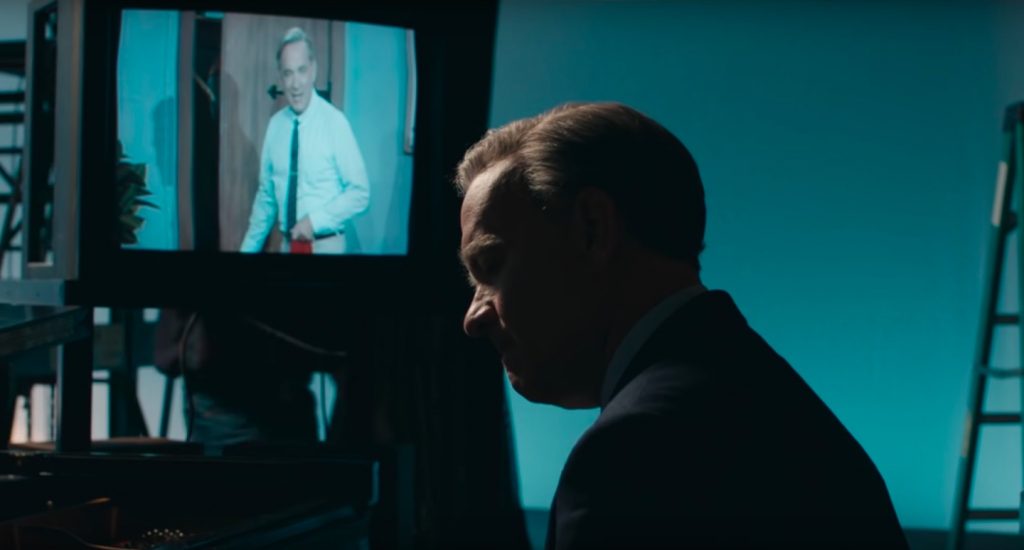 There’s a lot of great work all around, with Heller’s direction matched with confident cinematography by Jody Lee Lipes. Utilizing an aesthetic matching the feel of an episode of Mister Rogers Neighborhood with the surreal quality of having the actual man in one’s life means getting some creative visuals that I found quite worthwhile. The score by Nate Heller only adds further to what we are seeing.

There are plenty of little details scattered throughout, thanks to the terrific production, which I could only see as a way of making Mr. Rogers proud. While he’s no longer living, at least one can take comfort in knowing his wife Joanne (portrayed in the film by Maryann Plunkett) has given her approval to what this film wants to offer audiences.

A Beautiful Day in the Neighborhood plays like a warm hug in the form of a film. You meet damaged characters, as well as a legendary figure, and see how proper handling of a story manages to provide a take on Mr. Rogers’ life more accomplished than going the full-on biopic route. Meanwhile, the movie tells another strong story making up the bulk of the runtime, and it pays off well. Hanks and Rhys are in fine form, and the real surprise I found was Heller’s stylish direction, which made the experience of seeing this film all the richer. 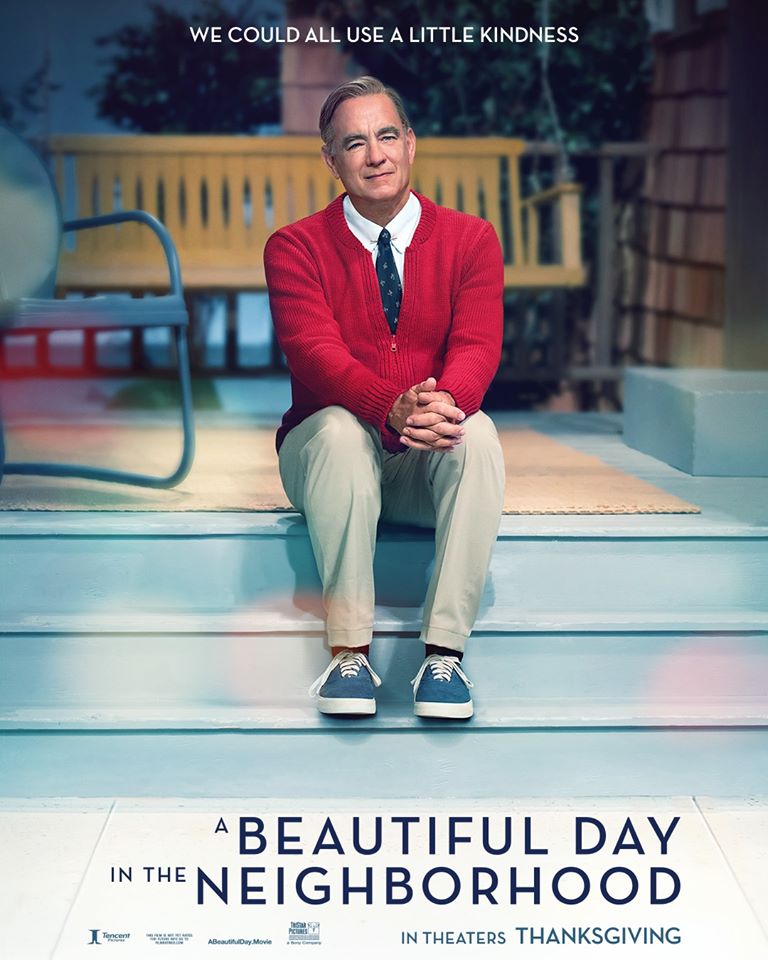 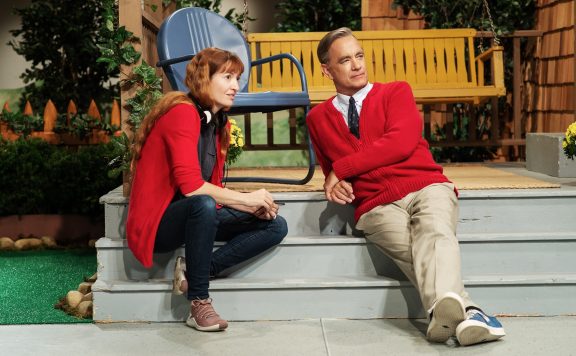