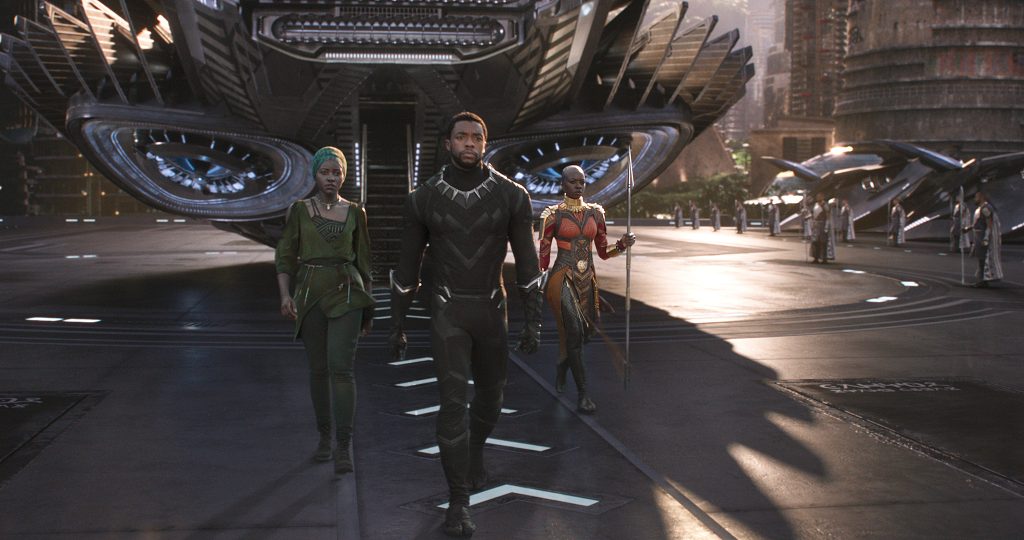 I should get something out of the way regarding Black Panther – this is going to be a very positive review, and it has everything to do with Marvel making the blackest big-budget blockbuster of all time. There is obviously a lot to be said for the quality of the film as well, and Black Panther indeed has many highlights regarding the stars, filmmaking and more. The sheer accomplishment seen in this movie is impressive for all the right reasons. It’s a film indebted to a particular culture, inspirational to anyone looking for positive portrayals of heroes of many kinds, and a solid studio action-movie about smart people making tough choices by way of intelligence and ability. Long live the king.

The king I refer to is director Ryan Coogler. He has gone from indie roots (the terrific Fruitvale Station), to a high profile and inspired sequel (Creed), and onto the 18th entry in the Marvel Cinematic Universe. Not bad for a kid from Oakland, CA. Even when considering areas of Black Panther that feel like routine moments for superhero films, Coogler shows off an assured level of control that helps the film hold onto its unique identity in this expansive universe. It pays off, as this is another film in a series that has had to balance a terrific stable of actors and a signature brand of entertainment with a sense of sameness that is only sometimes subverted or pushed to a different level.

All of this matters more because of what is at stake here. While I was never expecting the latest MCU film to be a giant disappointment, the nature of this film and the Hollywood system means this sort of cinematic gambit will weigh heavily on what happens down the line. A $200 million superhero movie with a predominantly black cast, set mainly in Africa, is outside the realm of what is considered “normal” and I know I’m just one part of a vast group of people that want this to succeed. The good news is I’ve already told you it’s a great film. 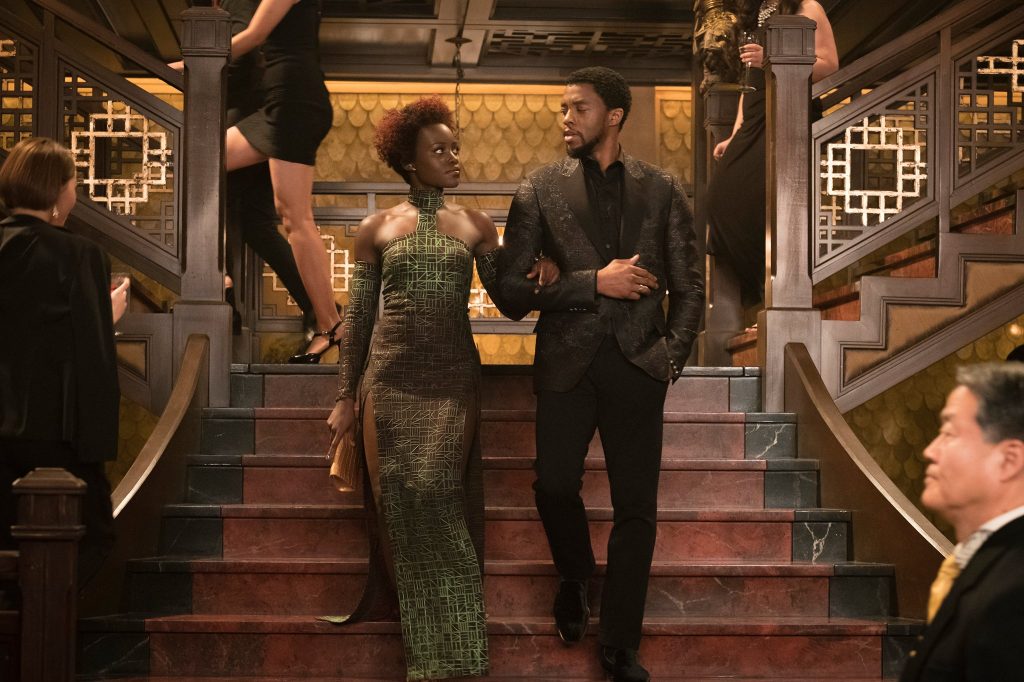 I’ve also already emphasized the blackness of this movie and for good reason, as it is a crucial element that isn’t about what makes it superior, but special in its own way. Now, this won’t lead to a story about how I grew up as a mixed child with a Black Panther doll just hoping I would get a movie someday. The fact is, I was aware enough of the character but wasn’t exactly collecting stacks of his comics. The most interest came when seeing Avengers open in 2012 and show just how well this whole cinematic universe thing had worked out for superheroes that had now become A-level stars along with the likes of Spider-Man and Batman. Six years later and I get to see a film capitalizing on a popular genre to play up the heroics of a non-white hero who isn’t named Chris, as well as show off an underrepresented culture in a major motion picture. That signals an event and judging by the box office tracking leading up to this film’s release, I’m not the only one who understands this.

To offer up a bit of the plot, Black Panther picks up after the events of Captain America: Civil War, which introduced audiences to T’Challa (Chadwick Boseman), the new king of Wakanda. In addition to being an enhanced superhero who can take down bad guys looking to harm his country and its people, T’Challa now has to deal with the responsibility of the throne. This means debating strategic political moves with opposing tribes as well as his own family when it comes to determining whether or not Wakanda should share their advanced technological developments with the rest of the world. These deliberations become sidetracked when an exile of sorts (Michael B. Jordan) makes his way back to Wakanda and challenges T’Challa for the throne.

While the story moves in some familiar directions, there is a lot to take in as the world of this film reveals itself. With so much focus on Wakanda, an advanced utopia that makes me hope we see a lot more Afrofuturism in movies to come, it’s a good reminder to point out what we aren’t seeing. This isn’t the story of a black man dealing with his roots to an impoverished, third-world African nation. Instead, we have a country of peace where the major dilemma (besides the giant supervillain coup, of course) involves whether or not they should show the rest of the world how to be better and function as a world united, rather than a planet of adversaries. That’s plenty of positive messaging, and it doesn’t even speak to the film’s function as an action-adventure flick. 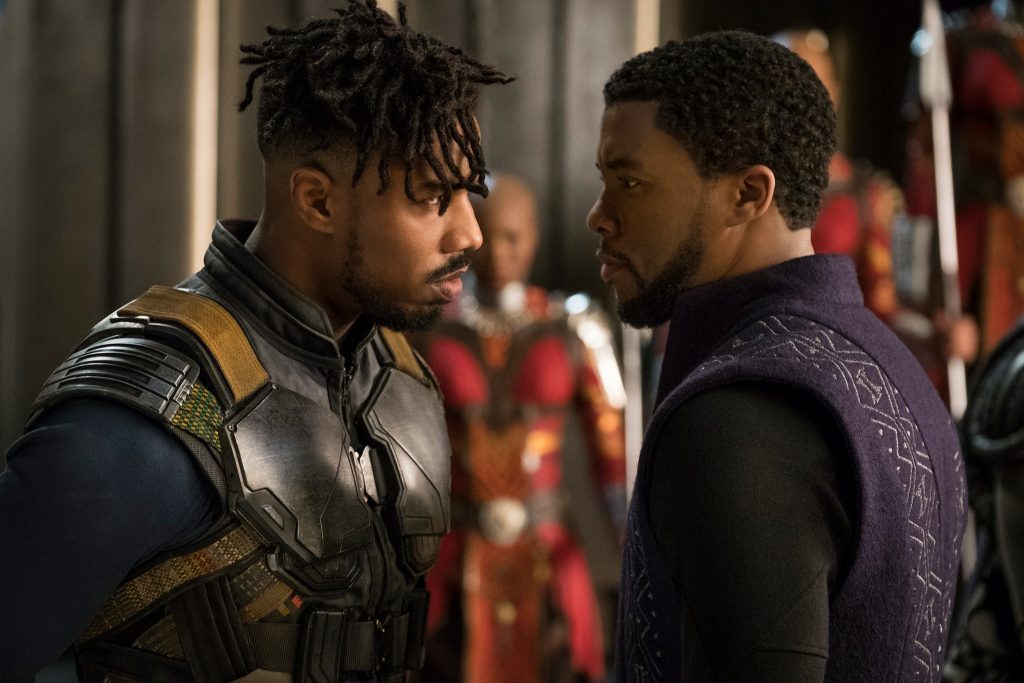 While there is a welcome amount of focus on the characters and their relationships, this is a Marvel Studios movie, and Coogler and his team deliver on the action, stunts, visual effects, etc. The big car chase provides a thrilling, fun, and imaginative pursuit sequence through the streets of Busan, South Korea. A couple of fights are set on a waterfall, as colorful, elaborately costumed characters watch. A final battle (that doesn’t feel overlong, for a change) finds a reason to exist as far as why all of these characters are involved and manages to mix up the kind of action we see thanks to some creative ideas. All of this and the camera work by Oscar-nominated D.P. Rachel Morrison is aided further with a score by Ludwig Goransson and audio tracks produced by Kendrick Lamar. Black Panther is a film that knows how to deliver the goods to an audience of superhero movie fans, as well as those interested in a movie with this pedigree.

Speaking of which, this cast is terrific. Boseman being promoted to lead character may make him seem a bit lesser than his wonderful moments on the side in Civil War, but he has a strength to him that keeps him in place as an encouraging presence to follow. Jordan continues to play very well with Coogler, as his villainous turn here has every bit of credence necessary to make his story feel important, while Jordan’s natural charisma makes him a force to watch on screen. The MCU has had issues when it comes to their villains. Whether or not Killmonger becomes a standout favorite, there’s plenty to admire in the thought that went into the character and Jordan’s performance.

Additionally, Lupita Nyong’o has gone from getting an Oscar for her portrayal of a broken down slave to a well-trained and adventurous spy for Wakanda. The Walking Dead’s Danai Gurira gets to play the fierce leader of Wakanda’s security force. Get Out’s Daniel Kaluuya is the best friend and confidant to T’Challa, who has his own interesting arc that continues to show off how great Kaluuya is at playing up the subtlety of a role. Letitia Wright plays T’Challa’s sister Shuri and will become a breakout star given the fun she’s clearly having on screen and the positive position she is put in as a role model for young girls. 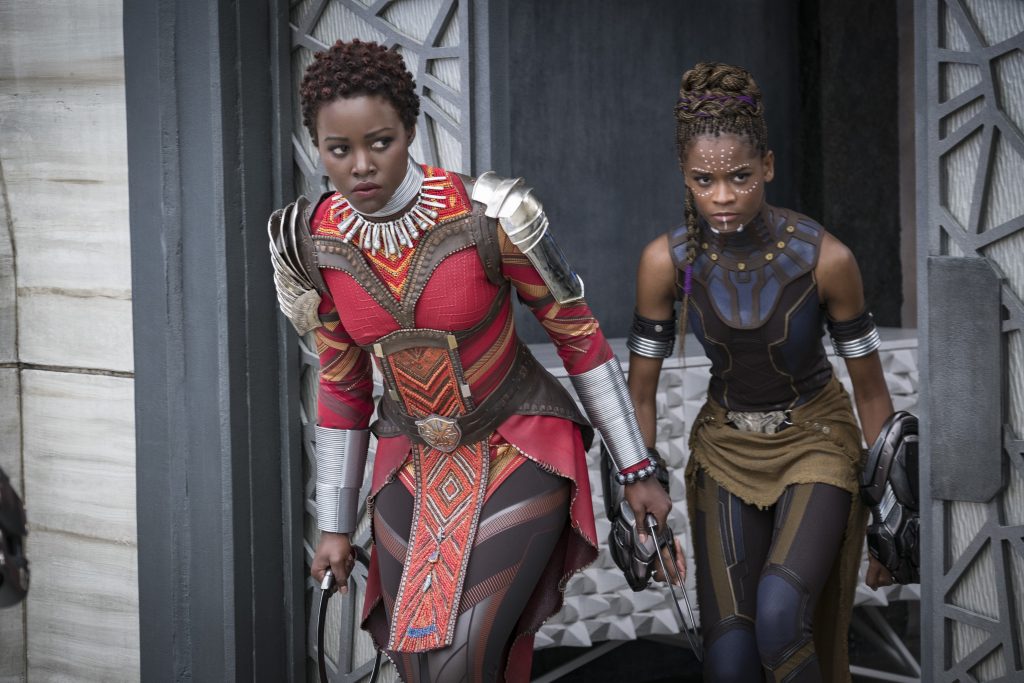 Also of note, Angela Bassett and Forest Whitaker step in as elders of Wakanda, with Bassett as T’Challa’s mother and Whitaker as black Obi-Wan Kenobi. They lend enough authority to an ensemble cast that already features a lot of strong performers on display. Martin Freeman continues to bring some cool confidence to his Everett Ross character, a CIA agent trying to get along with T’Challa. And lastly, Andy Serkis is back as Ulysses Klaue, the wild sort of villain who revels in his opportunities to be evil (he even provides the film an excuse to play up music on the soundtrack, because who wants to be bored during a car chase?).

It addition to shining a light on this great cast and perhaps belaboring the point that Black Panther is significant for a variety of reasons, this is a really fun movie. Coogler has said he wanted to channel The Godfather and James Bond films as far as seeing family drama in a diverse world explored by way of international espionage. He very much accomplished this in a movie that provides so much to visually take in, in addition to putting a focus on how T’Challa deals with the world around him. There’s no question that Black Panther also happens to be socially and politically relevant, but it’s the understanding that these sorts of ideas do not mean drowning a film in philosophical questions and hard-boiled drama that allow it to shine brightly in its attempt to feel vibrant with life, color, and character.

Black Panther is the sort of success you hope for in a film that is heavily anticipated. One can nitpick the same kind of flaws found in most of these Marvel/superhero movies (the film could be tightened up, some action editing quarrels, etc.), but it’s hardly a concern in an era when some things are just going to remain a standard. What matters more is how much the film manages to stand out from the pack by not only having the chance to highlight its African inspirations but really make something of all of those elements.  It comes in addition to being a film with plenty of entertainment value and makes for a smart movie, rich with culture, and full of enough cool confidence to continue believing in what Coogler and his talented cast and crew can bring given the opportunity. Long live the king, indeed. 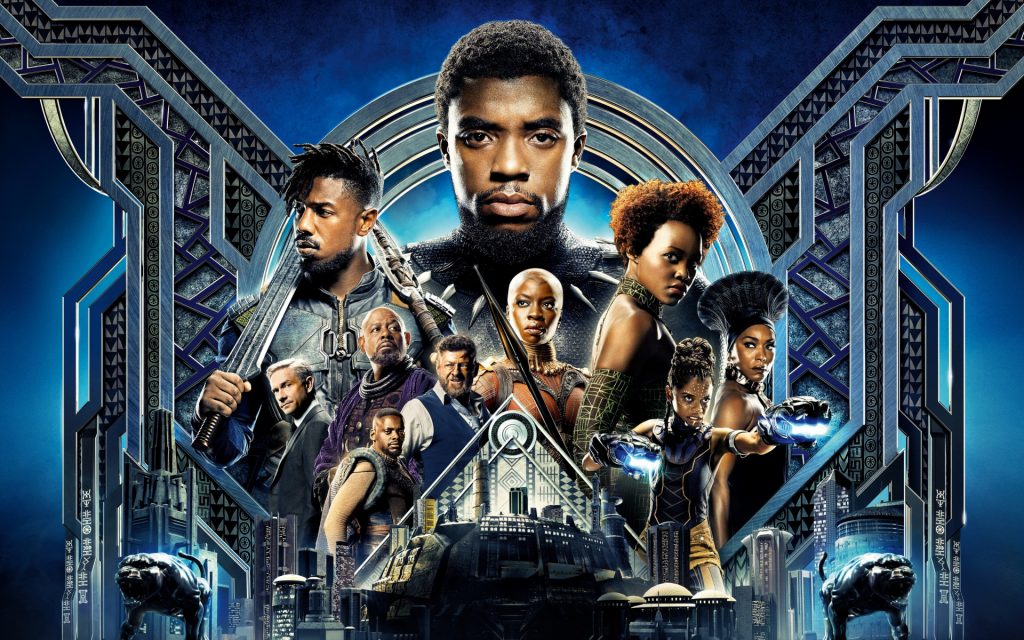 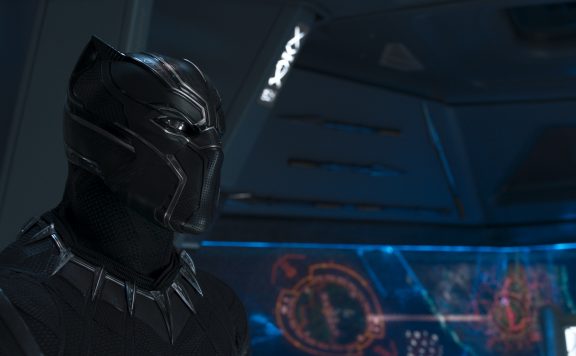