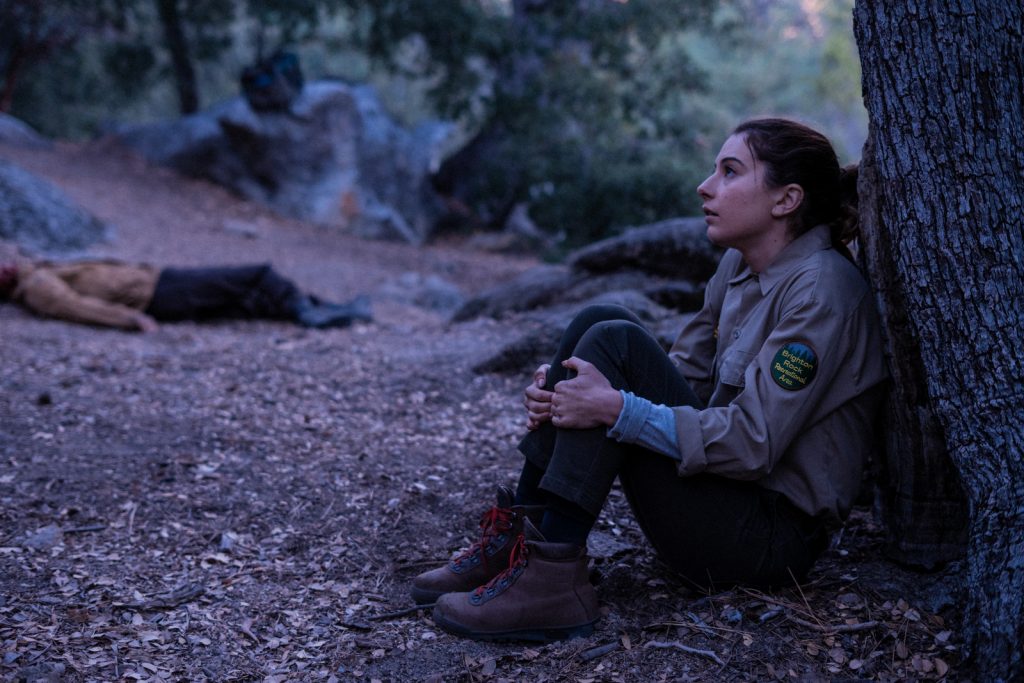 There is a lot to appreciate about a horror film content to do so little. Body at Brighton Rock takes a minimalist approach to an intriguing setup and works it for almost all its worth. Placing focus mainly on one character (two if you count the titular body), the stripped-down approach means making one location develop over time. Whether this has to do with how we visually see the space being occupied or having new understandings of the lead and the other elements surrounding her, the movie must go out of its way to maintain a level of dramatic tension. Fortunately, it succeeds.

A fun opening credits sequence, scored by an Oingo Boingo song no less, puts us in a proper mood. We are introduced to Wendy (Karina Fontes), an amateur park ranger who is late to the morning staff meeting. She’s capable but seemingly not cut out for the more rigorous outdoor activities the other rangers are more familiar with. Regardless, circumstances lead to Wendy taking on an assignment that means heading up the trails to post signs. A few slip-ups soon find her lost, without a map, and with a new problem on her hands. Wendy winds up discovering a dead body and is now in a predicament that means staying the night in the area to guard the potential crime scene.

This is the feature-length directorial debut of Roxanne Benjamin, a horror filmmaker who has already had her share of credits by way of anthology features such as Southbound and XX. She’s currently lined up to direct a remake of the 1984 cult classic Night of the Comet, but ‘Brighton Rock’ feels like a nice starting point for a film that feels like a campfire tale come to life. It’s a short flick with a fun balance between the era it wants to evoke in the filmmaking and the existential dread that feels more akin to modern times. 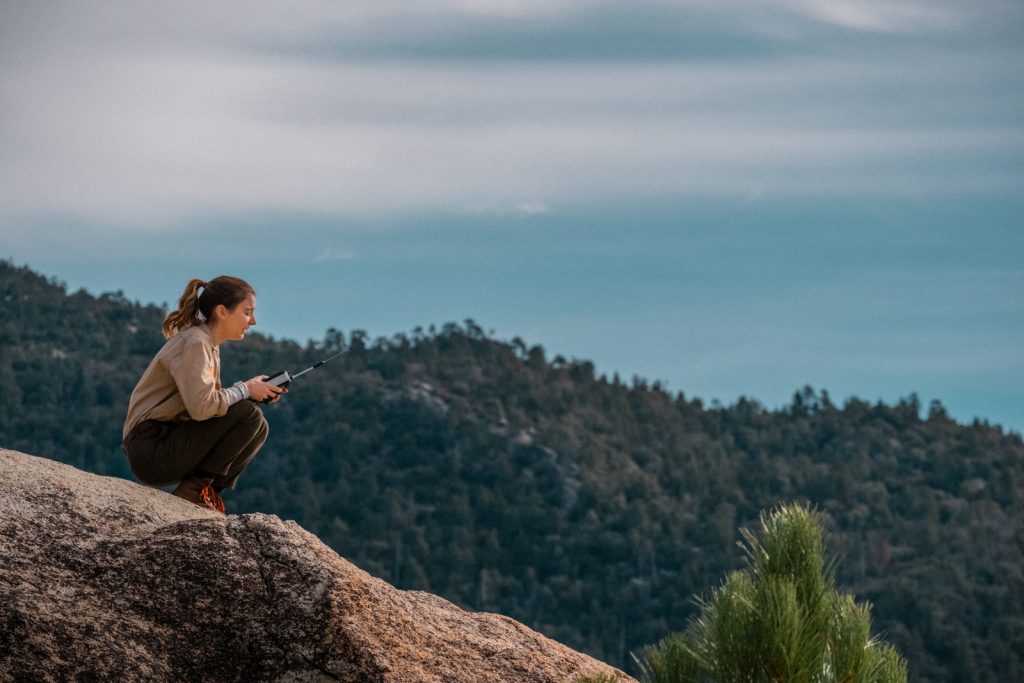 Not unlike Ti West’s The House of the Devil, there’s a lo-fi quality to what we see on screen, and it makes a film with such a simple concept play better as a result. This also works to throw the audience on edge purely over aesthetic choices. The film has a graininess, yet the colors are bright. Wendy communicates with the other rangers via a giant walkie talkie, yet characters also have smartphones. Even the body tends to go between looking like a dummy and packing more of a punch thanks to some grisly effects to show the damage done to it.

As a result, you have a film that melds together a variety of horror subgenres. Brighton Rock works as a survival thriller, slasher flick, giallo film, and a psychological thriller. It may not be reinventing anything, but being on the right side of how to play up these different angles certainly works to its advantage. The real challenge is how to keep the basic plot interesting.

For her efforts, relative newcomer Fontes has what is needed here. The film stacks the deck against Wendy by contrasting her initial optimism with mistakes that show why she may not be the best for the job. However, we get the proper adjustments as far as thinking about what kind of reactions we’d have in a similar scenario. The dread only increases once nighttime hits. Allowing Fontes to play up a paranoid angle concerning the state of the body and other potential figures lurking in her presence means the wheels in everyone’s minds are turning. 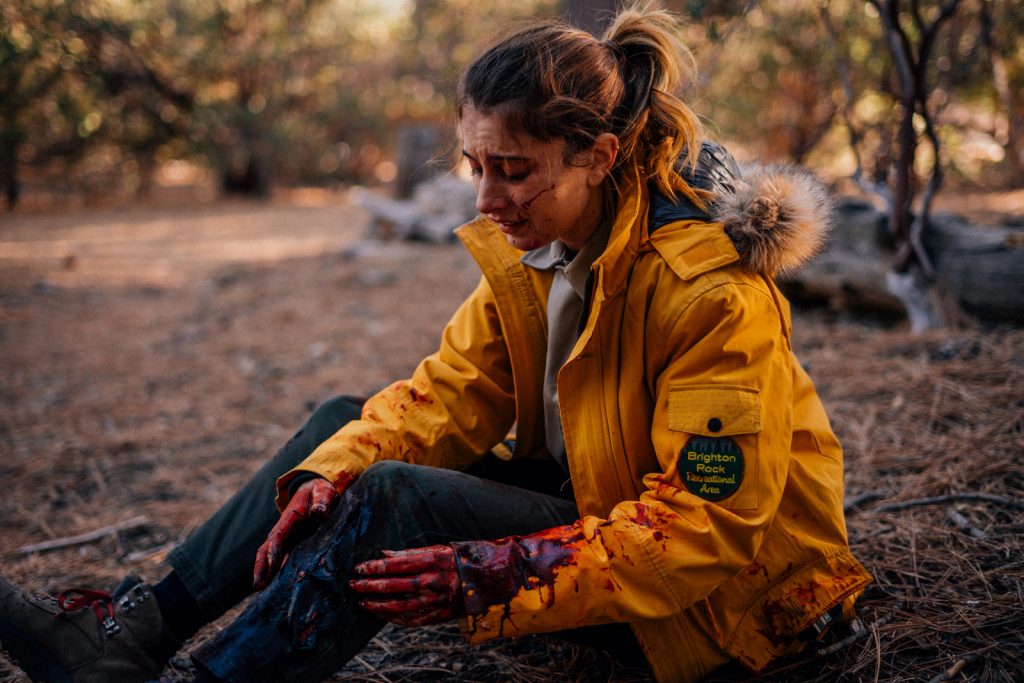 With an appropriate score by The Gifted and solid use of California’s San Jacinto mountains to serve as a unique backdrop, we get plenty to enjoy from a filmmaking perspective. These various elements combine to make for a proper study in determination and nervous bewilderment. Brighton Rock doesn’t spend too much time building up Wendy as a character early on, but the basics we get about who she is plays well enough as the film deepens the mystery she becomes entangled in.

I wish there were a bit more here in that regard. It’s one thing to be minimalist; it’s another to be too threadbare. A bit more directorial flair could make up for it, as even with a scant 87-minute runtime, the film still wavers in being able to support itself fully. Part of the problem is hinging the movie on a last-minute reveal that adds a new layer of intrigue but had to sacrifice other aspects to make it land with the impact it has.

Still, as far as a nice detour in the form of a crafty little horror flick, there’s a lot to like about Body at Brighton Rock. It has the spirit of younger filmmakers coming together to put together a professionally done movie based on some novel idea that inspired enough effort to see fully realized. It’s a bit slight in the long run, but while your hiking along the path of this movie, it’s nice to take in the surroundings. 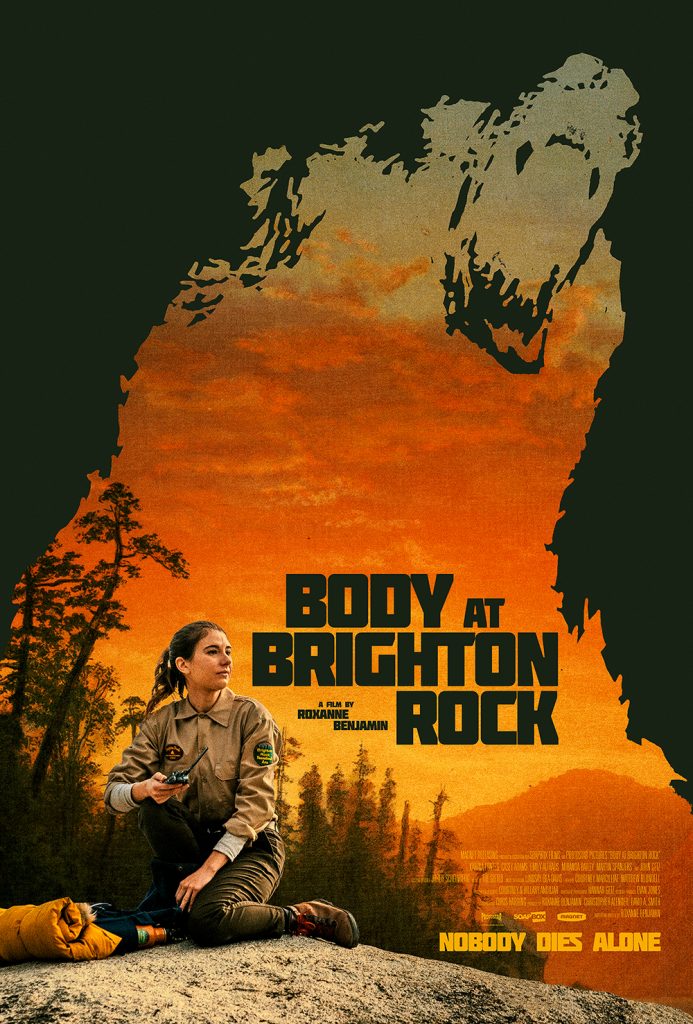