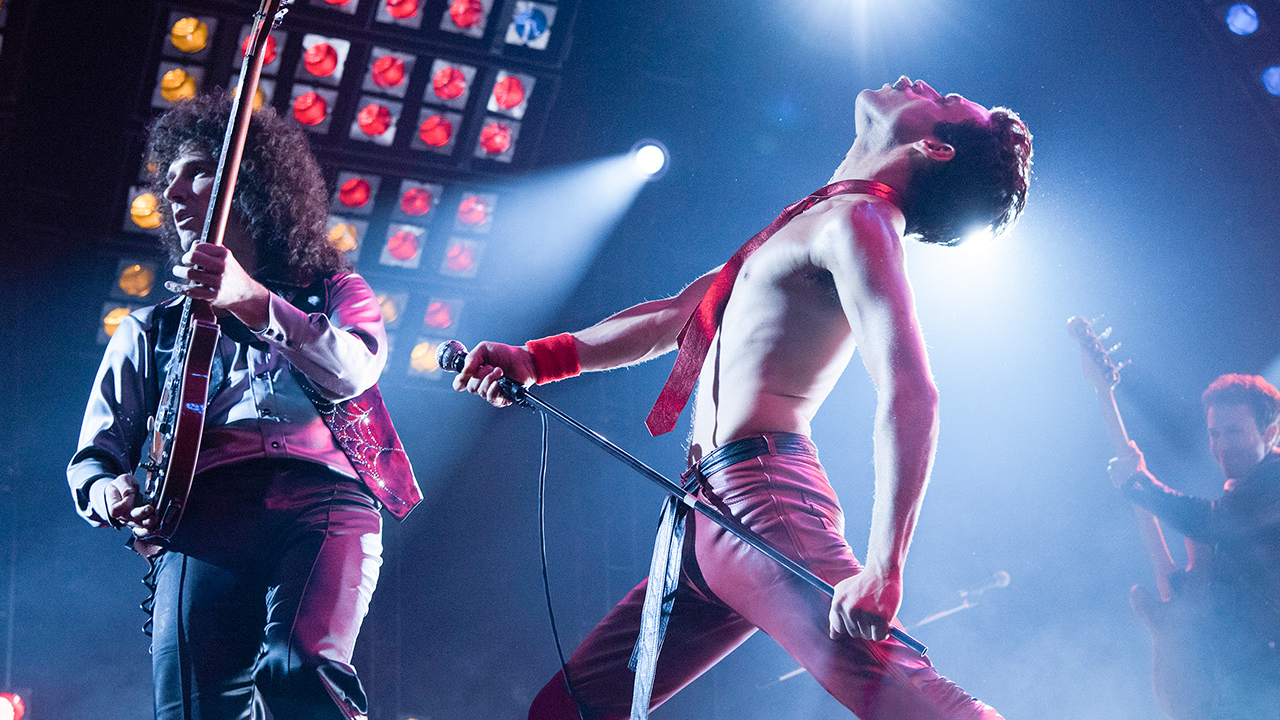 From Johnny Cash to Ray Charles to N.W.A., musical biopics have drawn back a thin curtain, providing a glimpse into the eventful lives of these larger-than-life icons. As a result, there tends to be a fragile balancing act between enlightenment and entertainment. X-Men director Bryan Singer takes on the task of chronicling the career of Queen’s charismatic frontman, Freddie Mercury, in Bohemian Rhapsody.

Introduced as 25-year-old Farrokh Bulsara, Mercury (Rami Malek) is a baggage handler at London’s Heathrow Airport. He has bigger dreams in mind, fueled by his vocal talents. After casually meeting up with the local rock band, Smile, Mercury shows off his signature range. Guitarist Brian May (Gwilym Lee) and drummer Roger Taylor (Ben Hardy) are immediately impressed with Mercury’s skills. And with bassist/vocalist Tim Staffell dropping out, the young baggage handler simply arrived at the right place at the right time. Success heats up quickly once bassist John Deacon (Joseph Mazzello) enters the picture and Bulsara undergoes the Freddie Mercury persona as Queen’s leading man.

Within a 15-year time span, Bohemian Rhapsody has a substantial amount of ground to cover, toying with accuracy to function within a 135-minute run time. Singer’s direction and Anthony McCarten’s screenplay aims to hit the obligatory biopic notes. Mercury falls in love with Mary Austin (Lucy Boynton), who weaves in and out of the film. Boynton checks the boxes as the biopic love interest. Bouncing between from romantic interest to occasional emotional support, it’s the sort of role we’ve seen before, albeit welcoming thanks to her performance.

Along the road to success, Mercury tended to clash with record companies, fellow Queen band members and his own ego. After recording 1975’s “A Night at the Opera,” Mercury found himself at odds with EMI Records over the “Bohemian Rhapsody” track. While much of the scene involves record label politics, Malek is exceptional at playing hardball against EMI exc Ray Foster (Mike Myers). From a contemporary standpoint, it’s no secret what sort of phenomenon “Bohemian Rhapsody” turned into since making airwaves 40 years ago. It’s one of the film’s primary highlights way before the grand climax.

Once the 80s hit, Mercury’s superstardom is overblown and tensions rise within Queen. The cliché of sex, drugs and rock and roll run wild throughout this chapter in Mercury’s career. His lack of professionalism irks his fellow band members, specifically his inability to arrive on time. Yet, they’re less concerned with his incoherent playing as long as he can play. Around this time, Mercury found himself in a toxic relationship with personal manager, Paul Prenter (Alan Leech). His conflict with his sexuality plays a substantial role throughout Bohemian Rhapsody, which was rumored to be downplayed. Fortunately, that wasn’t the case in McCarten’s script, offering heaps more conflict in the film’s latter half. Once again, Malek encapsulates all aspects of Mercury’s life with great precision. Even with a toned down PG-13 direction, Bohemian Rhapsody is played off as a more accessible biopic.

While Bohemian Rhapsody strings together many of its segments, it doesn’t take away from a profound culmination at 1985’s Live Aid. It’s one of those rare send-offs befitting a real superstar. Yes, the motivation may have been fabricated for the film, but the final 20 minutes will get the audience’s hearts pumping. If a two-hour jukebox of “Killer Queen,” “We Will Rock You,” “Another One Bites the Dust” and “Under Pressure” didn’t already do the job, Queen die-hards will surely be waving their lit phones in the air during “We are the Champions.” Actually, don’t do that in the theaters. Save that for a personal watch down the line.

Rami Malek is the heart of Bohemian Rhapsody, immersing himself fully into the superstar role of Freddy Mercury. The biopic might fall slightly short of star-studded greatness, but Malek has a brighter star ahead of him. For the Night at the Museum and The Twilight Saga: Breaking Dawn – Part 2 actor, you truly are the champion of this film.