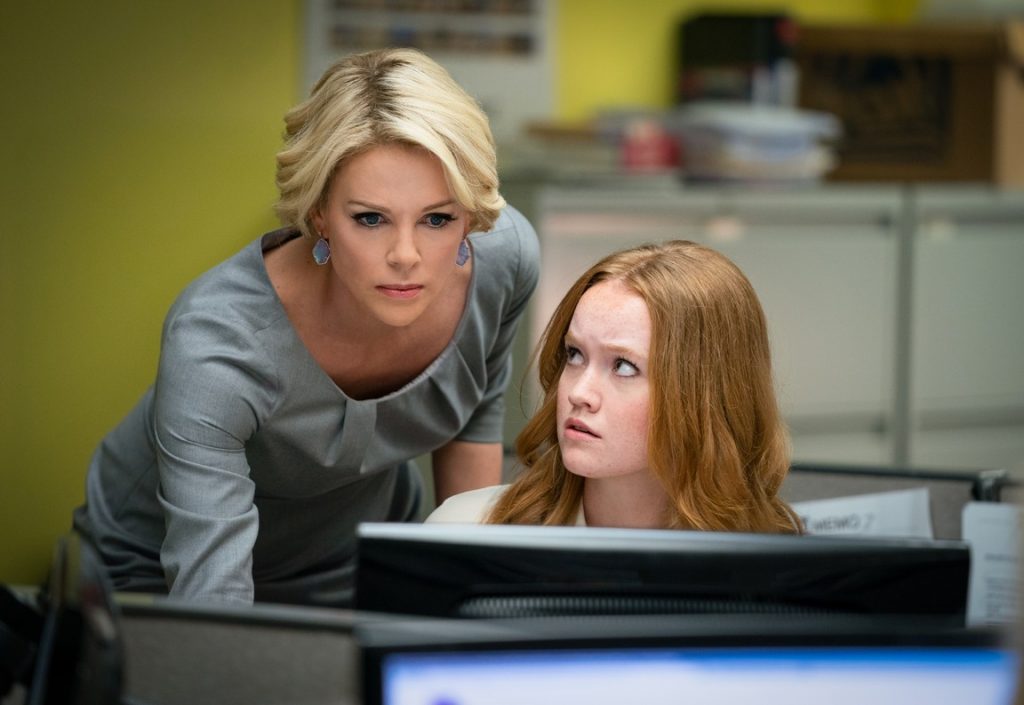 It’s interesting to consider the types of movies people still go to see in a theater during awards season. While blockbusters (particularly of the Disney brand) are set to be seen at any time of year, there is a push for other types of films to be seen by general audiences from say November to January. Bombshell is a biopic concerning the women at Fox News who spoke out against CEO Roger Ailes for sexual harassment, leading to his downfall. That doesn’t exactly sound like a fun time at the theater, but director Jay Roach has constructed the film to pay as a satire. However, what could play as an ironic screwball comedy surrounding some heinous issues (or something deeper) comes off more as an exercise for stunt-casting, elaborate makeup design, and a minimal amount of edge.

Set during the time leading up to the 2016 election, the film centers upon three female Fox News employees. Charlize Theron is Megyn Kelly, the journalist caught in an attention-getting battle with (at that time) potential Republican nominee Donald Trump. Nicole Kidman is Gretchen Carlson, the TV commentator who was first to form grounds for a lawsuit, given the toxic environment she no longer wanted to be a part of. Margot Robbie is Kayla Pospisil, an associate producer looking to rise up in the world of Fox News (Robbie’s character is a composite of various people). The common link between each of them is Roger Ailes (played repulsively by John Lithgow).

Bombshell, formerly titled Fair and Balanced, was written by Charles Randolph, and the script lands somewhere between his work on the great burst of energy that was The Big Short and his utterly dismal The Life of David Gale. Uninterestingly directed by Roach, who found much more success directing “important” comedic biopics for HBO (Recount, Game Change), than on the big screen (Trumbo), this director-writer combo seemed destined to mishandle an opportunity to deliver something that actually felt like a bombshell landing. Instead, the film is a dud. 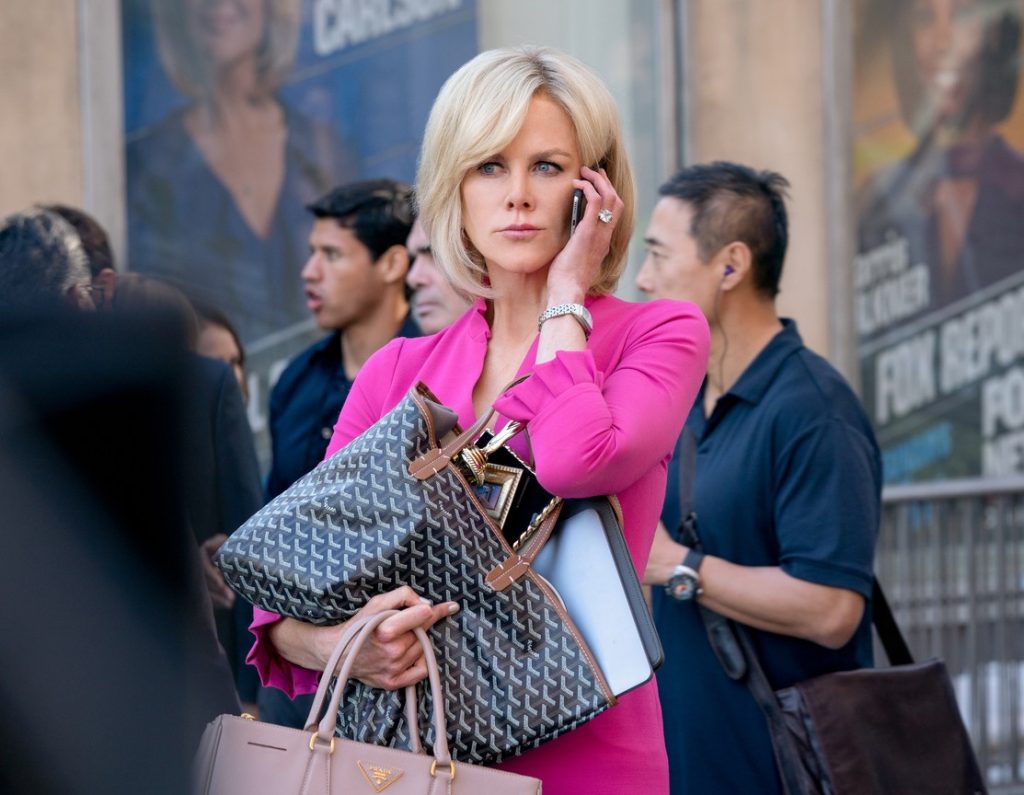 The biggest question I had concerned what audience this film is for. A conservative crowd that lives and breathes Fox News isn’t going to show up for a movie that is seemingly mocking them. At the same time, however, I have to wonder if there is much in the way of mockery. No, the film doesn’t dance around the idea that Kelly, Carlson, and others not only speak to values that represent a significant portion of the country, but feel like misguided (and often hypocritical) attacks designed to enrage people, but Bombshell has nothing to really say about this either. Instead, the film sidesteps the positions these TV personalities take (in exchange for money and attention), to focus on what Ailes put them through.

Now, no one should suffer this kind of intimidation and humiliation, that much is obvious. Still, Bombshell seems more excited to be turning such an ugly story into a feature, rather than find a way to delve into what the real issue is, what kind of attitudes have led to this problem, and where things should go next. Yes, the film puts together a depiction of a state of affairs that should not necessarily need to spell out how bad things are from various angles, but the storytelling doesn’t support much of any other kind of read either.

What’s left is whether or not the presentation is entertaining, and what the performances have to offer. I would say it’s a mixed bag in both cases. Roach takes a half-hearted approach at having the audience follow Megyn Kelly along as she directly addresses the viewer while going through her days at Fox News. This behind-the-scenes access is a way of letting everyone see the various actors and comedians hired to portray all the big names at Fox News. That supporting cast includes Connie Britton, Rob Delaney, Malcolm McDowell, Allison Janney, and Richard Kind, among others. However, the approach doesn’t really go anywhere, as the narrative continually switches between the three main characters, along with Ailes’ perspective, as the walls begin to close around him. 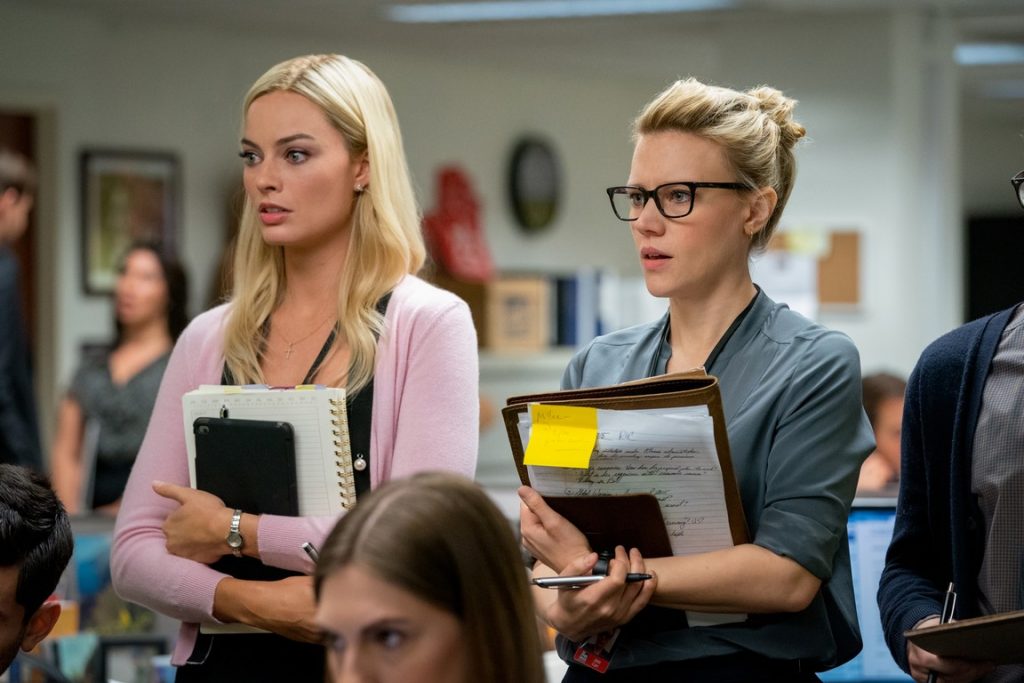 Performance-wise, the makeup is doing a lot of the best work. Acclaimed artist Kazu Hiro (who recently won an Oscar for his work with Gary Oldman in The Darkest Hour), is among the people involved in specifically modifying Theron and Lithgow. They are no doubt successful, but to what effect? Theron doesn’t deliver much that extends beyond an approximation of Megyn Kelly, but to what avail if the film doesn’t have much more to explore beyond a fairly public understanding of the notable news personality from not too long ago. As she’s ostensibly the film’s lead character, there’s potential in exploring her professional and public life, given the regard she has for Ailes, let alone her hypocritical stances, and how she manages things with her husband (Douglas Brunt, played by Mark Duplass) and children. None of that is explored all that deeply.

Faring better are the supporting characters. Kidman has the least to do in the film as Carlson but also comes closest to reckoning with what her work as a Fox News personality means outside the office. Balancing that element with the harassment allows us to see a film actually trying to lean on its more interesting aspect.

This is played to fuller effect with Robbie’s Kayla Pospisil, although her character being a composite of others reduces the dramatic impact, despite allowing her to have the most complete arc. At the very least, there’s a chance to explore her rise in Fox News and how that affects her and those around her. This most notably extends to Kate McKinnon as her colleague, doing her own work to hide aspects that could jeopardize her position in such a powerful network. All of these elements bring the film the most energy, as well as the most uncomfortable moments (due to Ailes’ involvement), which keeps the movie in a strange area as far as the tone it is striving for. 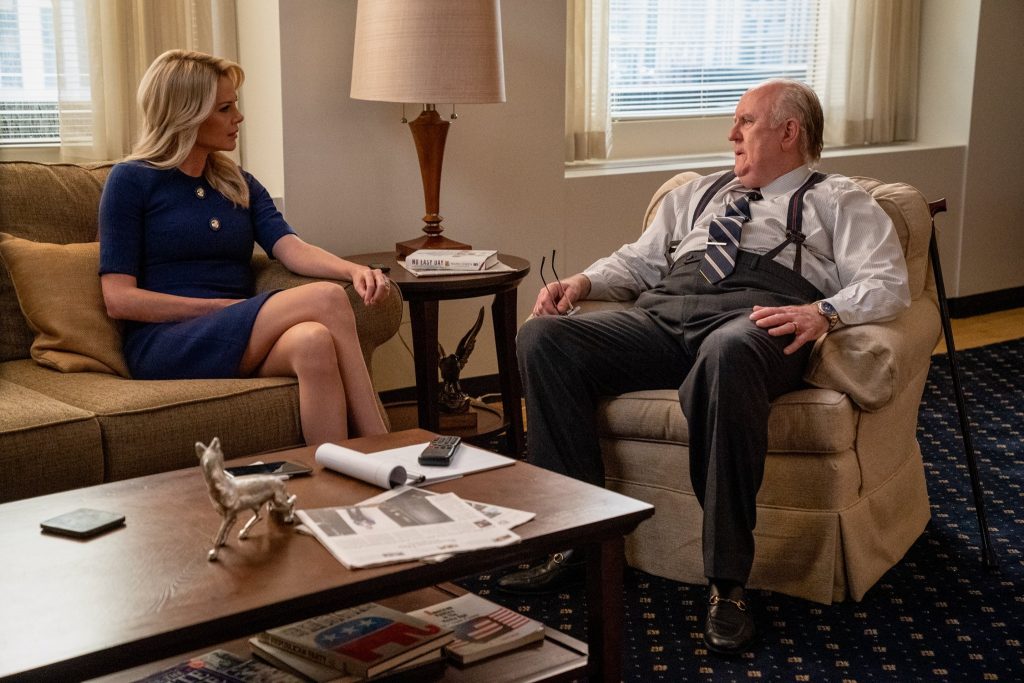 2018 delivered Vice, which was met with a lot of acclaim and multiple Oscar nominations. I was not as onboard with that film as others, and a part of the problem had to do with intention, much like Bombshell. The difference there had to do with seeming like a film preaching to the converted. Screaming about the corruption of Dick Cheney only goes so far when it’s the only thing taking place, no matter how strong/convincing the performances are. Bombshell feels even worse, as the work feels far shallower. Yes, having good actors means the work is competent, but I’m not sure what this adds up to beyond providing a strange satisfaction of looking at the seediness of a corporation get handled, despite still dealing in obscured versions of the news.

Perhaps the film would work better if it didn’t come so soon after the events that occurred. As it stands, I can merely say the supposed fun to be had in a movie placing A-list stars in very specific roles did very little to entertain. Between the frustrations of watching these news personalities handle things in the ways they do combined with the uncomfortable nature of Ailes’ actions, I can’t say there was a lot to grasp onto in terms of thought-provoking cinema. Instead, the mix of makeup, set recreations, and a long list of performers willing to play dress-up largely came off as shallow but fair to a point, and unbalanced as a film. 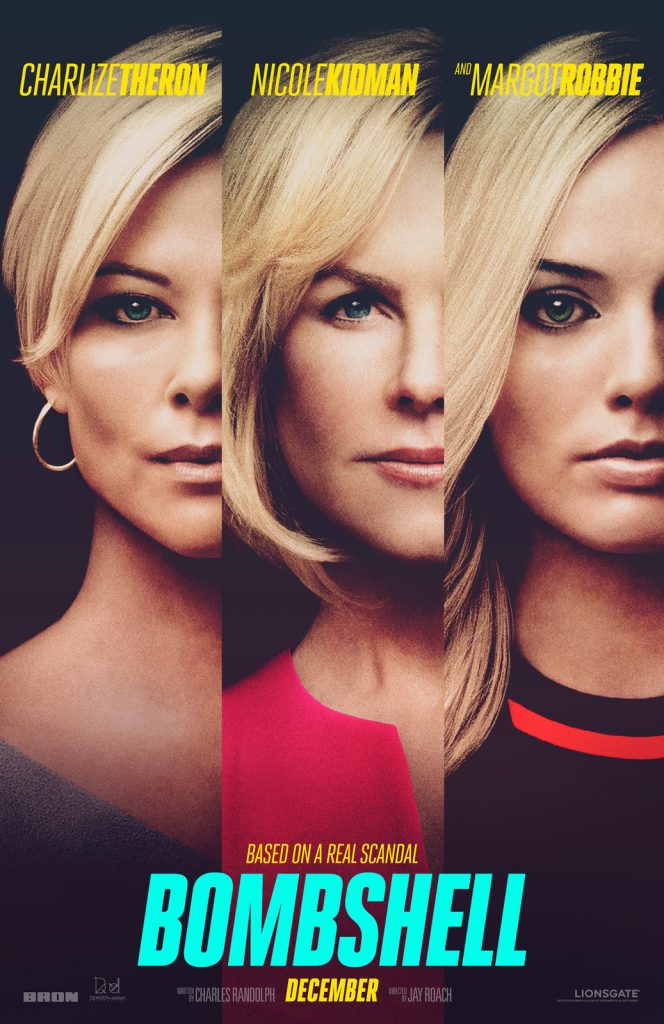