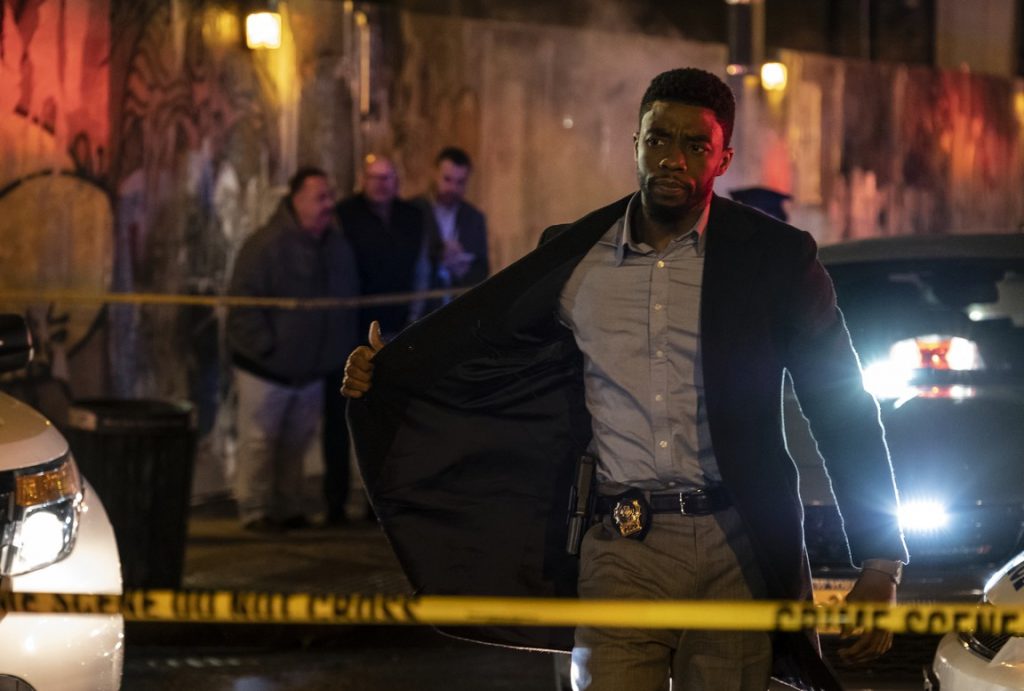 There’s a big trailer-friendly moment in 21 Bridges, a predictable but competently made cop flick, where star Chadwick Boseman dramatically turns to camera and says, “Shut them down.” He’s referring to the twenty-one bridges connecting Manhattan to New York. The various tunnels and ferries are mentioned too, but a movie called 21 Bridges, 6 tunnels, and 4 Ferries is not as catchy. Regardless, the big movie star moment ideally calls to mind Sydney Poitier in In the Heat of the Night and Tommy Lee Jones in The Fugitive rolled into one. Boseman does command the screen in that regard. I only wish the film’s police procedural plot had more to offer.

The film follows Boseman’s Andre Davis, an NYPD Detective with a reputation for getting the job done well, even if lethal force is deemed necessary a bit too often for the higher-ups. Davis is put on the scene following the murder of several police officers, with the two shooters (Stephan James and Taylor Kitsch) in the wind. With enough knowledge of the situation, Davis is given the night to find the cop killers, with the help of Manhattan being locked down, and the support of a narcotics officer (Sienna Miller). However, even with enough intelligence to stay on the trail, the situation may be more complicated than it seems.

21 Bridges is the kind of film that will have regular moviegoers seeing the plot turns coming right before they occur. While it seems clear director Brian Kirk was aiming to make a film calling to mind gritty cop action-dramas from the 70s, he’s ended up delivering a film ideally suited for dropping in on when it airs on TNT. Paying full attention to the film may not lead to many surprise revelations in the story, but if a viewer is scrolling around on their TV and stumbles across 21 Bridges, they’ll be fine getting in on the fun. 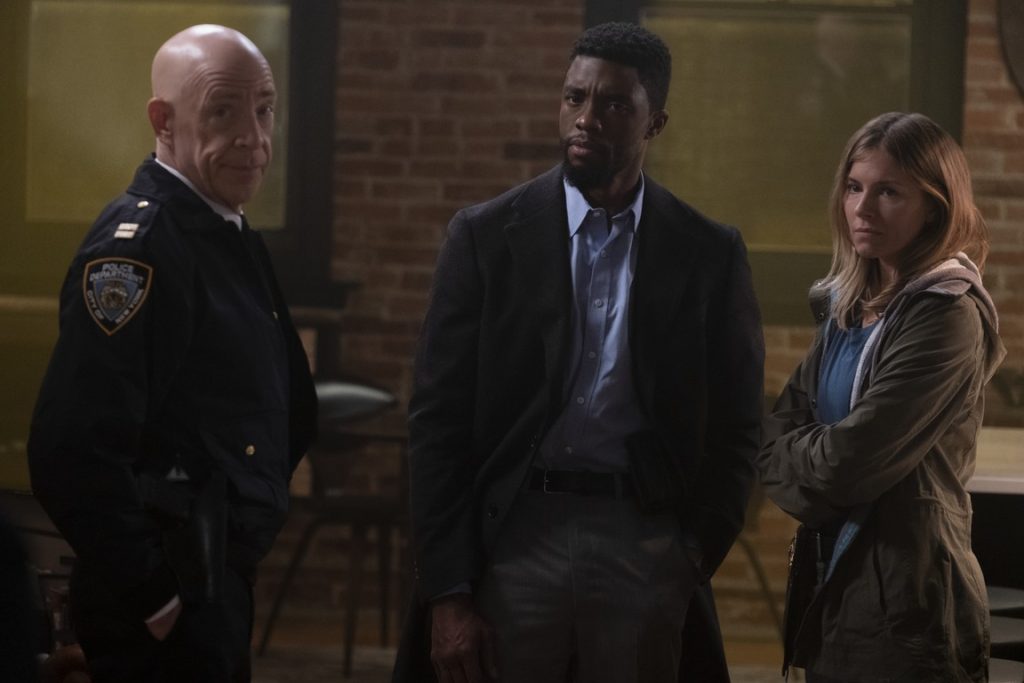 The good thing is how overly qualified this cast is. Boseman is pretty great here. He may once again find himself in a feature that feels like an extended pilot for a polished TV series, not unlike Marshall, but I like the idea of the actor taking on projects that rarely have him in the wrong, and being able to look and move as slick as possible, while taking on bad folks. The screenplay by Adam Mervis and Matthew Michael Carnahan also allows Boseman to trade some witty dialogue with the rest of the cast. As a matter of fact, it’s the depiction of police work where the film shines brightest, as the use of deduction and process highlights the characters being good at their jobs.

Other actors impress as well, even with a heavy reliance on various forms of New York accents. Miller spars well with Boseman in the early scenes of them determining their next moves. Keith David pops up for all too small a role as a veteran officer, but his presence is welcome. J.K. Simmons makes a meal out of his role in this film, with Kirk finding every opportunity to pull in close-ups of the character actor’s face. Most interesting is the pair of criminals everyone is after.

Now settling for smaller roles playing against type, Kitsch gets plenty of mileage out of his part as the more hotheaded of the two. He’s skilled but intense, and there’s just enough sense of what’s informing the emotional state he’s in to have you not feel entirely against this guy who committed such a seemingly heinous act at the start of the film. James, clearly in between better work following his terrific turns in If Beale Street Could Talk and Homecoming, is meant to be sympathized with. He’s in over his head, scared, and left with few options. Having the film check back with these two and develop a solid dynamic works well in the film’s favor, especially given how easy it is to figure out what they’ve stumbled into.

Still, even if 21 Bridges doesn’t find a way to mask its familiar story beats, I enjoyed the rhythm of what was being presented. The dialogue was heightened in a way that fit the mood and atmosphere of the film. Kirk was competent enough to evoke a certain period, while not stifling the movie with obvious visual choices to hammer home the point. Paul Cameron’s cinematography is effective enough in that way to make the New York (and Philadelphia) filming locations work to let the film play as modern entertainment, complete with some fun action beats not counting on how familiar the audience is with The French Connection.

In terms of escapist value, while not entirely absent of social commentary, this does feel like more of an effort to swing towards simplistic morals, rather than a challenge to the system. Some moments of reflection do come up, whether it’s the stance Boseman has towards his actions established early on, or a monologue Simmons delivers concerning the life a police officer has and what civilians think about that. There’s not enough meat on the bones of this film to really cause a stir, but between this and the recent Deon Taylor film Black and Blue, there’s enough to like in how 21 Bridges navigates the line of being an action film as well as one that can add a few moments fueling further discussion.

As an old school action flick made with modern sensibilities, there’s plenty of value in 21 Bridges. It’s not working to deliver on anything all that ambitious, but the strong work from Boseman and the appropriate amount of focus on the men he’s chasing keep the film engaging. Keeping things reasonably low-key, despite an assist from “visionary” producers Joe and Anthony Russo, director Brian Kirk delivers a grounded cop movie that features just enough scenes of people interacting in ways I enjoyed, as well as chase, fight, and gunplay scenes fulfilling the action quota. It’s a standard cop flick, but made with confidence, and plenty willing to show off as many bridges as it can. 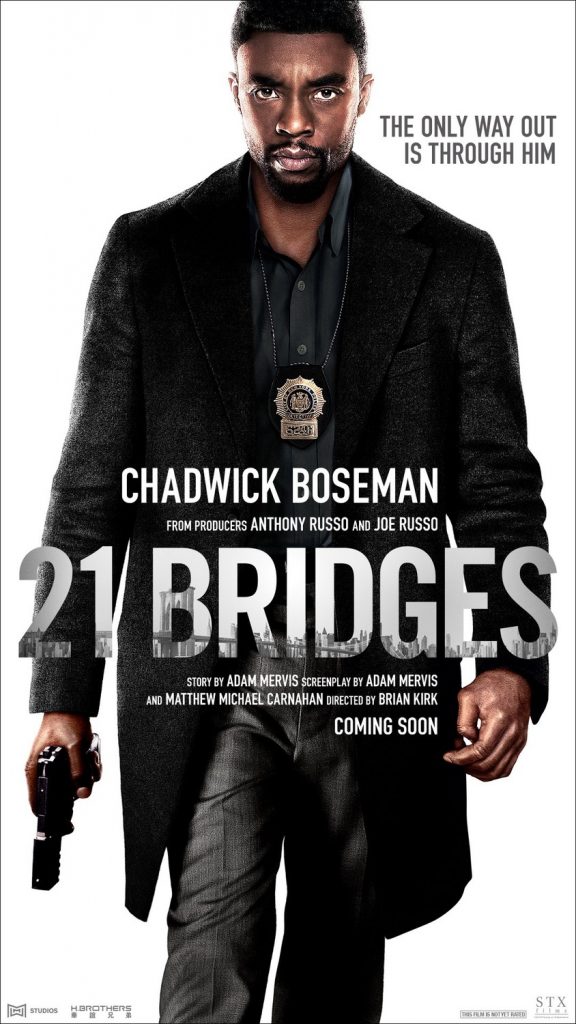