Despite being billed as the third Captain America film, Captain America: Civil War doesn’t find it necessary to put any effort in a smoke and mirrors campaign to disguise its true intentions of being The Avengers 3 or at the bare minimum, The Avengers 2.5. Then again, after Age of Ultron’s slight shortcomings a year ago, Civil War is nothing shy of a soft apology.

Set one year after the events of Ultron, Captan America (Chris Evans) and his tight band of colorful superheroes (Scarlett Johannson, Anthony Mackie and Elizabeth Olsen) are dispatched to Nigeria to handle a terrorist threat, engineered by an old enemy (Frank Grillo). If you remember Brock Rumlow from Winter Soldier, he’s back with a vengeance, evolving into his more memorable villainous persona from the comics, Crossbones.

The situation ends up going south with plenty of collateral damage as one of the Avengers fails to control their powers and destroys a hospital unintentionally. That doesn’t set well with the United Nations and Secretary of State Ross (The Incredible Hulk’s William Hurt), who are alarmed by this disastrous pattern since the showdown with Loki in The Avengers. After an endless string of catastrophes in New York, Washington D.C., fictional European nation Sokovia and now Lagos, the UN demands the Avengers be reeled in, only to act when they deem it a necessity via the Sokovia Accords.

Distrustful of government agendas and fueled by his old school ideals, Captain America refuses to bend to the UN’s wishes. Iron Man (Robert Downey Jr.) views the situation differently after running into a mother of one of the Nigerian victims, who blames the Avengers for her son’s death. After the disaster with Ultron and now Lagos, he believes the Avengers are aiding in the escalation and need to be put in check. Cap and Iron Man aren’t the only ones with differing opinions. In fact, the entire Avengers squad is split down the middle, resulting in the aptly named Civil War. Adding more fuel to fire, Cap’s super soldier friend, Bucky (Sebastian Stan) is on the run and is blamed for a bombing in Vienna where the Sokovia Accords are being ratified.

After getting their feet wet in Captain America: The Winter Soldier, the Russo Brothers have delivered a film that surpasses it on almost every front. That in itself is a most grueling feat as Winter Soldier was one of those rare superhero films that transcends the genre with its welcoming 70s political tones. Granted, Civil War isn’t quite as grounded as Winter Soldier was, but it finds its footing in being a masterful hybrid between that praiseworthy sequel and The Avengers. The energetic screenplay from Christopher Markus and Stephen McFeely hit all the right notes with its heated exchanges between Tony Stark and Steve Rogers to its memorable quips from a certain web-slinger entering the fray.

As the longest Marvel Cinematic Universe film at 147 minutes (yes, longer than Avengers and Ultron too), Civil War is a never-ending thrill, bouncing from one location and set piece to the next like a James Bond film. While the marketing campaign hits home the almost gimmicky Team Cap vs. Team Iron Man storyline, albeit nowhere near as bad as the Team Edward vs. Team Jacob fangirl war in Twilight (shudders), Civil War finds itself obligated to plant the seeds of two years worth of MCU films, mainly the introduction of breakout additions in Black Panther and Spider-Man.

Chadwick Boseman’s (42) arrival as T’Challa, the Black Panther from Wakanda, is undoubtedly one of most impressive in the MCU. With his solo film still two years away, Civil War offers an appetizer of what to expect in 2018. For much of the film, the vibranium-clad superhero is out with a vengeance with his sights set on Winter Soldier, despite Captain America out to protect his brainwashed bestie.

Late to the MCU game due to legal technicalities, but still more than welcome is our neighborhood-friendly Spider-Man. Tom Holland (In the Heart of the Sea) assumes the mantle of the New York web-slinger from Tobey Maguire and Andrew Garfield in what is the iteration one can only dream of. Even if you grew up on Maguire or later Garfield, there’s no denying that Holland knocks it out of the part. Spider-Man’s presence serves more to set up Spider-Man: Homecoming next year.

If there’s any consolation, Spider-Man arrives just in time during an airport battle in the second act, which unloads the entire kitchen sink in a clash between heroes. While the heartbreaking finale between Iron Man and Captain America climaxes the film, the airport battle is the real money shot, bringing in just about anyone and everyone from the Avengers to the playing field. In fact, it’s difficult to track down another action sequence in the MCU that can rival it. But make sure you thank Ant-Man and Spider-Man for this one.

Civil War succeeds with its balancing act miles beyond what DC’s Batman v Superman: Dawn of Justice attempted earlier this year. Both films pit superhero against superhero where the villain is reveling in the shadows. But with Civil War, the emotional payoff and resonance is ever present as we’ve known what Tony and Steve have been through the last few years and their ideals clashing since the very first Avengers. And you almost want them to hug it out much sooner than later, because there’s a big fish out there in space to fry called Thanos. Go get cracking you two. 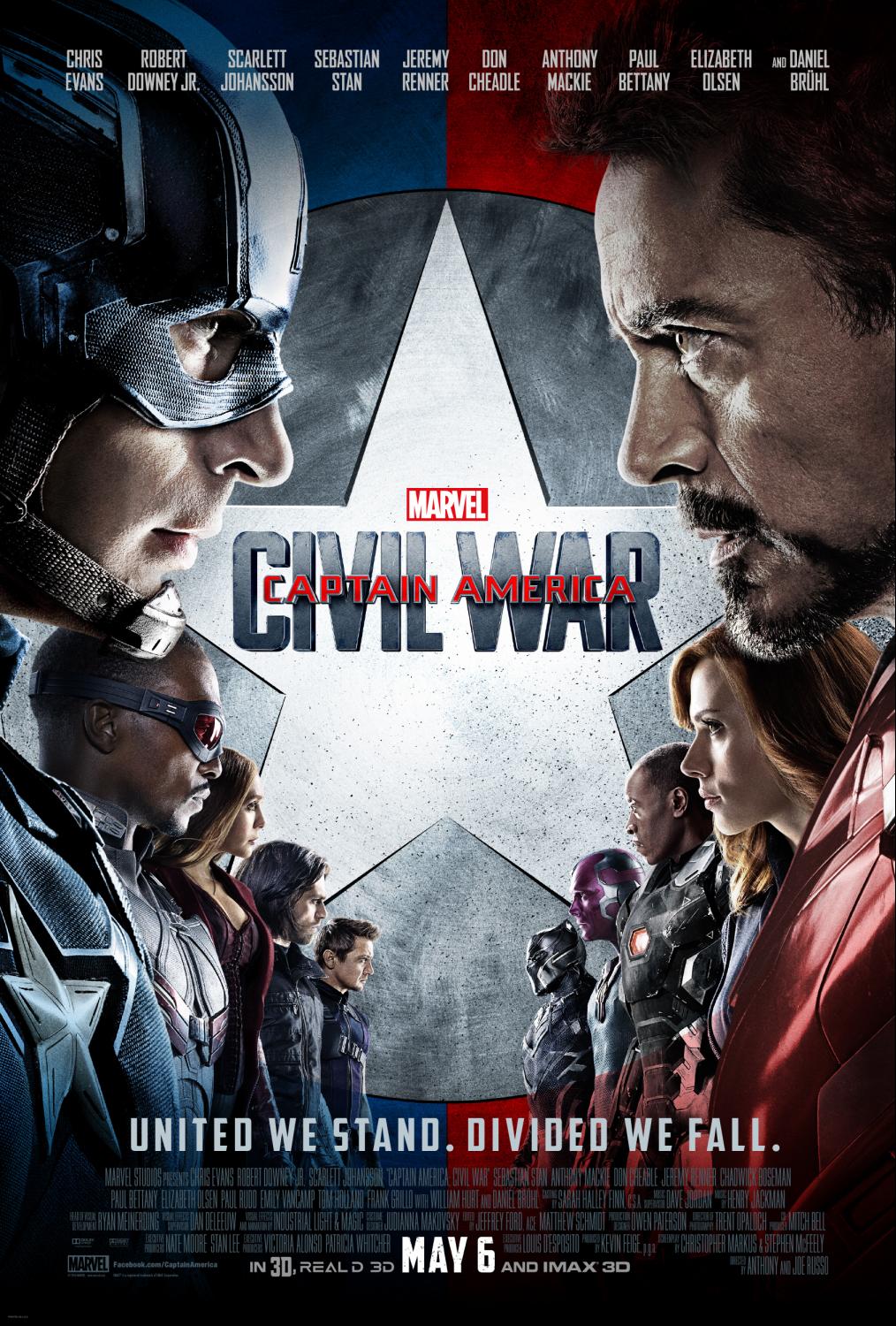