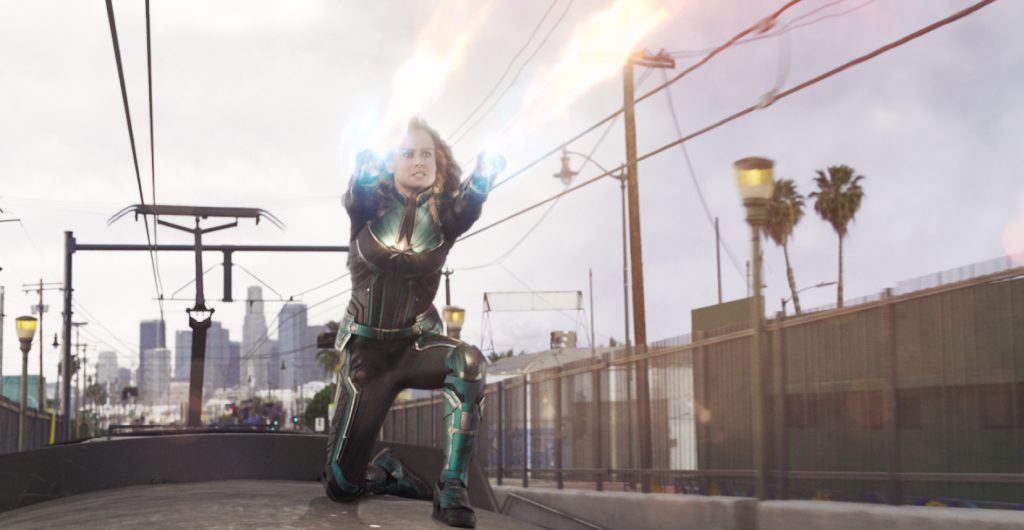 It is interesting to consider Captain Marvel merely as a pretty good superhero film based on just how far this genre has come. It’s one thing to deliver an exciting new hero for fans to latch onto, connect with, and anticipate when it comes to future films, but there’s only so much to go on when that character is in a movie that exists to get a little bit done. In the case of Captain Marvel, this entry in the superhero genre satisfies the need to clarify a newly formed gap in Marvel Cinematic Universe history, and provides a solid lead role for Brie Larson, with plenty of fun support. There’re some other elements to take into account as well. However, for all the work presented to make for a rousing picture, it feels relatively slight in the grand scheme of things.

Following some arresting visuals to set up our hero, we open with a film happy to throw the audience into the cosmic world. Guardians of the Galaxy may be the best reference point for many to study up with, in case the film’s exposition comes to quickly, as much of Captain Marvel has to do with the Kree alien race. Larson’s amnesiac character, referred to as Vers, is a member of an elite Kree military unit, who finds herself stranded on earth, following a failed mission. She eventually teams up with Samuel L. Jackson’s two-eyed Nick Fury to rediscover her own identity, while dealing with aliens at war.

Credit to directors Anna Boden and Ryan Fleck, who co-wrote the film with Geneva Robertson-Dworet, as we have a film attempting to shake up the origin story format. Rather than provide a story giving us Carol Danvers from a young child onward, we’re watching the story of someone learning about herself. Sure, we essentially see the story of how Danvers becomes the best version of herself, which makes the film follow many of the traditional origin story beats, but Captain Marvel manages to have some bright ideas of how to edit together her backstory to make for a compelling character study in a non-traditional sense.

Not hurting at all is the film’s tone. Given the nature of the character, the mix of cosmic and earth-based settings, and the lack of self-seriousness, I can only wonder how different things could have been for Superman’s recent films if they had the attitude of Captain Marvel in mind. While one can see Danvers as a tragic figure of sorts, that’s not what this movie is going for.

Even as one with a scattered memory, Larson imbues the role with a fun and a dry sense of humor. That lends itself to having a hero who enjoys being a hero, rather than feel burdened by it. It’s quite fitting for the MCU, where the charisma of the lead characters is what most of the films traffic in, as opposed to action sequences. Not hurting is the ample amount of time spent putting Danvers with this solid supporting cast.

While watching Danvers spend time with mentor-figure Jude Law and the Kree crew in the opening is all well and good, it’s the teaming up between her and Fury that allows the film to find a groove. Their back-and-forth chatter works to keep things moving, as the plot deepens around them. It says a lot for Jackson, who knows how to dial into Fury when given more of a part to play in these films. The chemistry he finds with Larson and in this Marvel world, in general, is a fine way of keeping things grounded enough, amidst all alien-related stuff he discovers along the way. 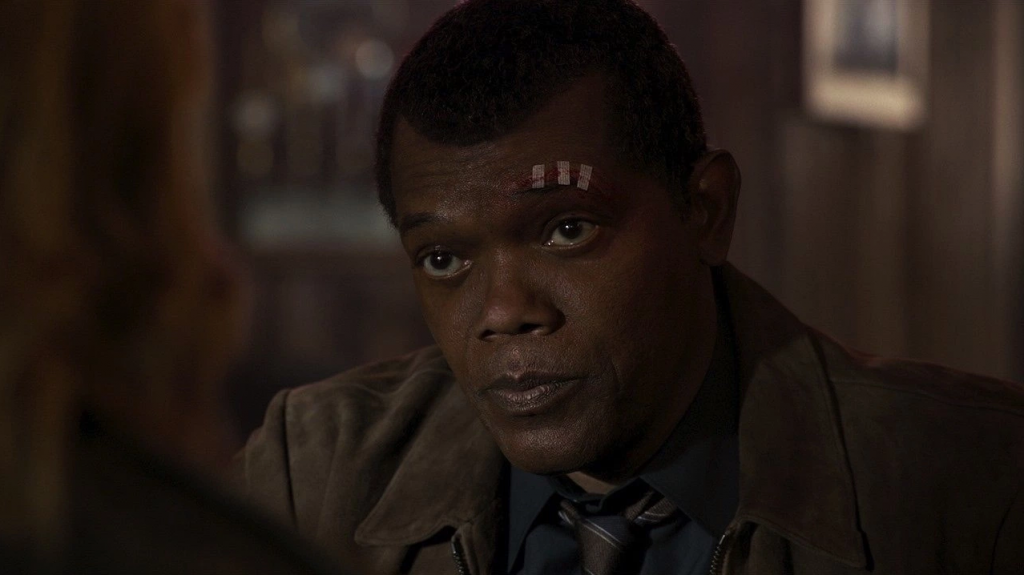 Additionally, Ben Mendelson is having a wonderful time as Talos, the shape-shifting leader of the Skrulls, who gets to mix up his persona. Lashana Lynch’s Maria Rambeau makes for a good best friend, who gets more involved in the film’s second half, along with a winning Akira Akbar as Monica, Maria’s daughter. Other actors go underutilized, as is the case in many of these MCU films with ensemble casts that don’t quite know how to share the focus as well as Black Panther, but Annette Bening does get a chance to stand out in a pivotal role for the film.

With everything mostly in the proper place, it still seems notably lacking in much weight. There’s praise to be given for its thematic handling of the role other’s play in telling women how to use their abilities, with more points going to the film for not directly concerning itself with the fact that Danvers is a woman. However, the story being told is still a fairly familiar one, to the point of many cast members not even finding much wonder in what’s being discovered. It’s as if, even for a film set in the 90s (and the film has lots of fun with that), the idea of going to space for the first time, to fight aliens no less, only registers so high on the wow factor scale.

In terms of the visual effects, action, and all of that, this film does what is needed to keep those areas interesting enough. The alien worlds are a mix of CG backgrounds and generic spaceship hallways, though there’s one effect involving a virtual space that I would have liked to see more of. Makeup for the Skrulls looks excellent, along with the blue-skinned Kree, which is inconsistent enough for me to wonder how their species works. And the less said about Goose, the cat, the better, for the sake of surprise, but this feline is one you’ll remember. 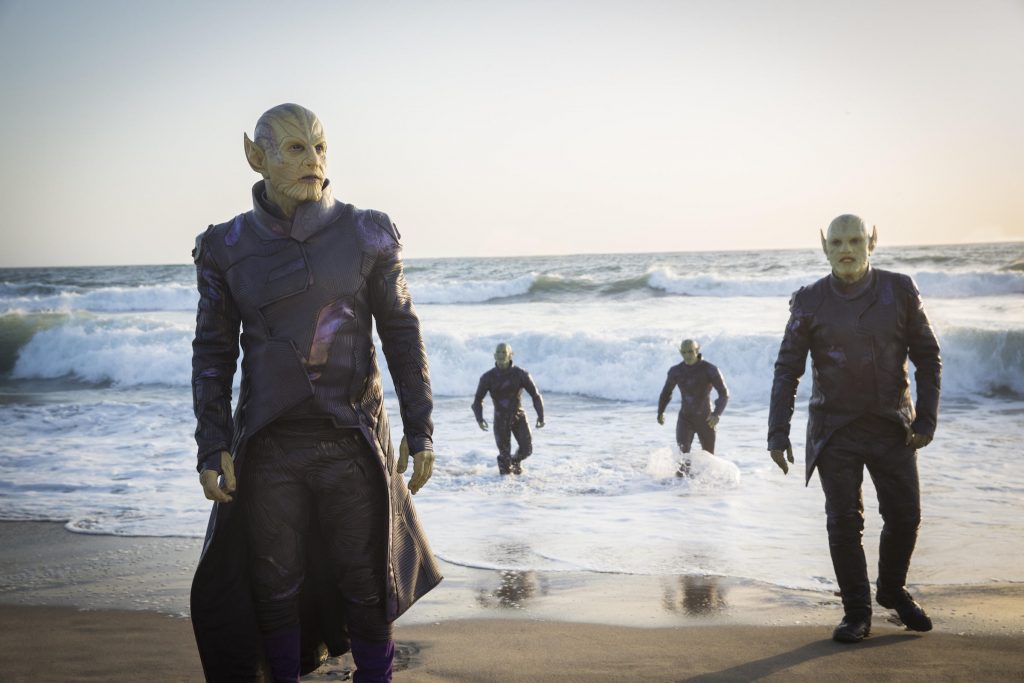 Seeing Danvers fight off various aliens, spaceships, and more is fun enough, though it’s another Marvel film where the training involved for the actors only goes so far when it comes to showing these things well in camera. A major car-train chase in the first section of the film is good enough, though given what we learn it also feels like something tacked on for the sake of having an LA-based chase scene. That said, that chase gave me a Speed vibe, and a plane vs. spaceship chase certainly made me think of Independence Day. So, if those 90s movies were being referenced on purpose, I am happy to have caught on.

As with all of the standalone MCU films, the idea is to provide the audience with a hero we can get behind. If Captain Marvel is going to be the player needed to help stop Thanos in Avengers: Endgame, then this film does the job in establishing why she’ll likely fit in just fine with the rest of the group. Larson brings her suitable efforts to the role, and Jackson, among others, do quite well keeping up thanks to what the story provides for some of them.

Captain Marvel is never dull, not overly long, and plenty entertaining. However, it’s not moving the dial all that much either. Beyond being the first solo-female led Marvel Studios movie, which is quite meaningful to many (who have also surely caught on to other important elements), there is little to help the film standout.  It’s not the worst problem to be good at delivering what’s expected for a superhero film, but I await seeing what comes next. With this initial entry out of the way, seeing Danvers be super should be more exciting as we get to newer adventures, with other Avengers or otherwise. 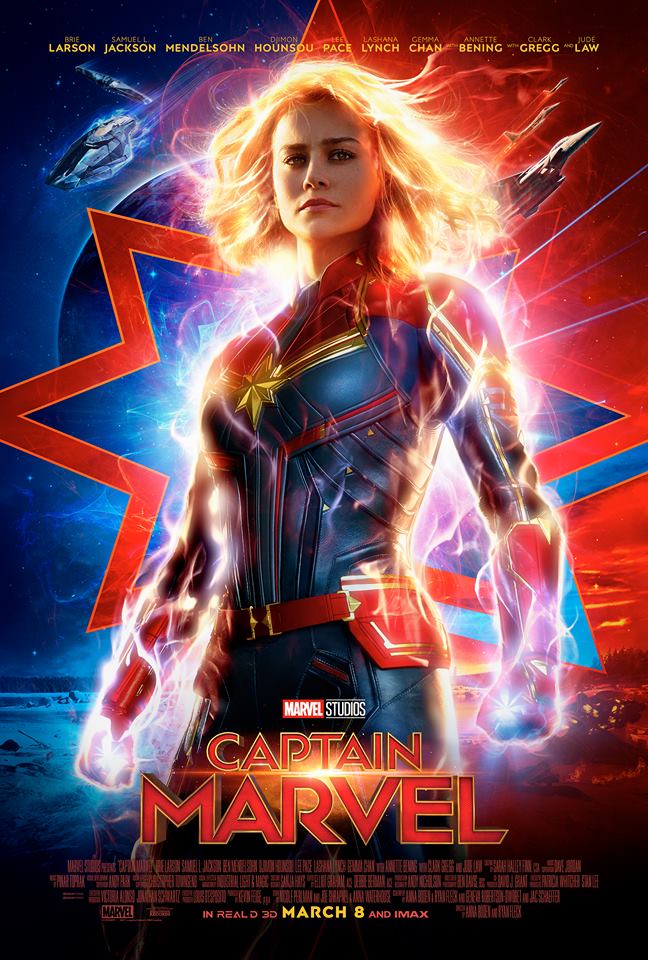