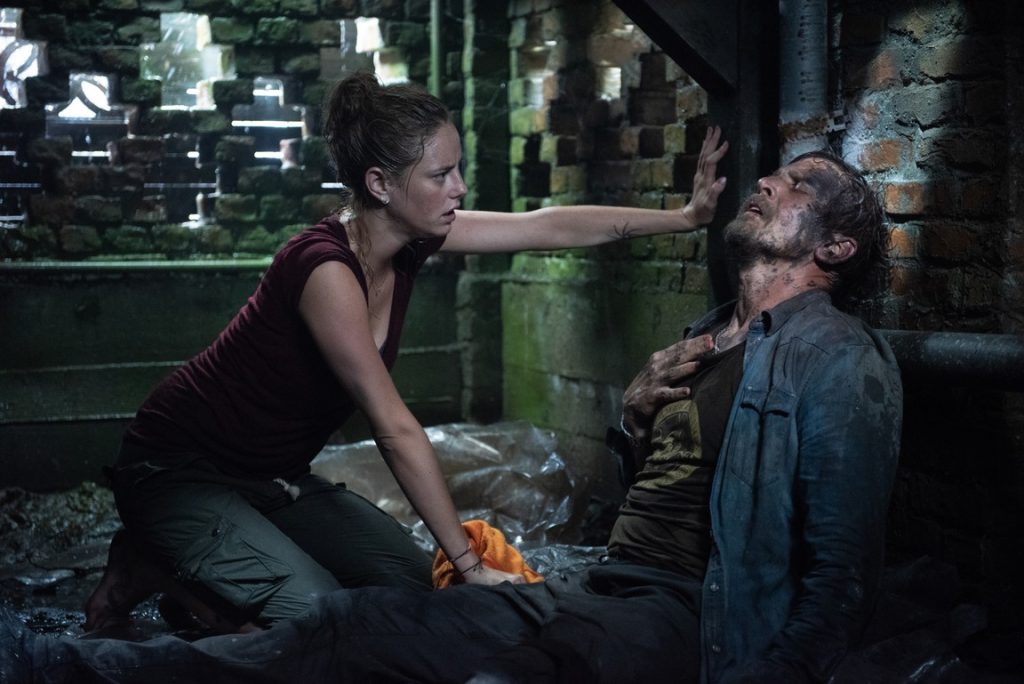 It is very satisfying when you get exactly what you were looking for out of certain movies. That’s not to say it means the film was predictable, but finding joy in something predictably entertaining can be a delight. Crawl delivers on that level of expectation. It’s not rewriting the rules in any horror handbook, but it’s a slickly-produced disaster-horror-thriller that melds some decent drama with a killer high concept. In and out in under 90 minutes, Crawl knows how to satisfy its audience, whether it’s with tense, watery chases or with some gory moments completely fit for an Alexandre Aja creature feature.

The setup is simple. Haley (Kaya Scodelario) heads home to find her father, Dave (Barry Pepper), during a major hurricane. The two of them end up trapped in the crawlspace basement of their home, with a couple of alligators lurking in their midst, blocking the exit. As the water rises, so does the tension, as escape plans dwindle.

Crawl is a model of efficiency when it comes to establishing the characters, without wasting time. The family dynamic is sketched out quickly enough, establishing that Haley and her dad aren’t on the best terms, despite working well as a team. Their skillsets are also perfect for a genre flick. The two are stuck under their house, with water and tools as their main assets. Good thing Haley is on the swim team and Dave is a handyman. 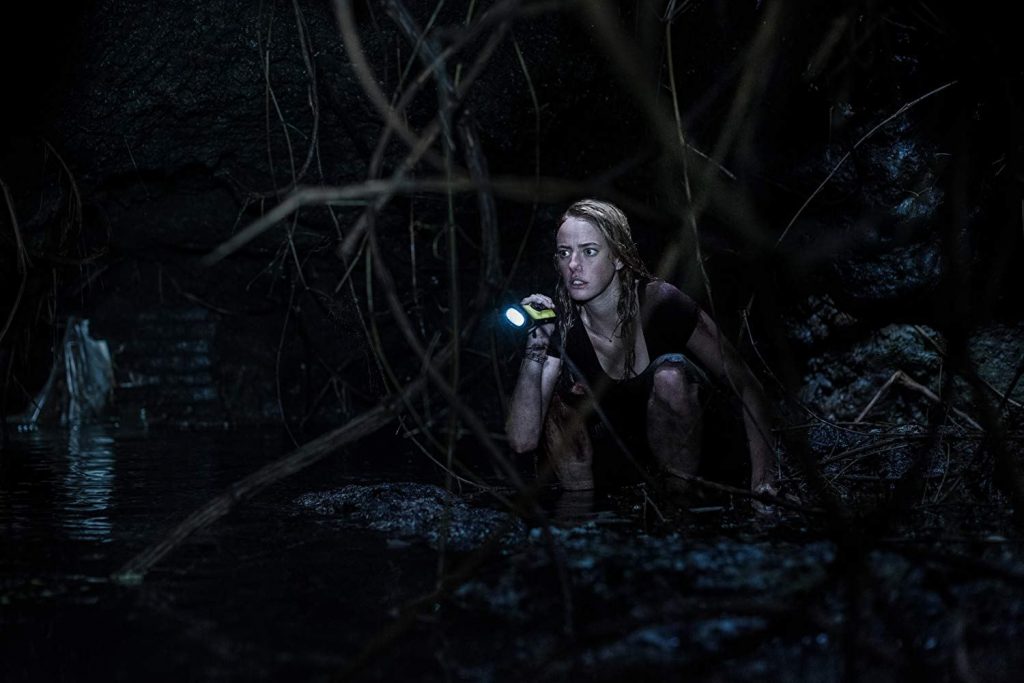 These are convenient factors, but does that hurt the drama? Not at all, as it levels the playing field. Much like 2016’s sleeper hit shark flick, The Shallows, this is a movie where characters are smart enough to be task-oriented for the sake of staying safe. Minor injuries occur early to keep from making it too easy for them, with a ticking clock in the form of rising water to increase the stress. Whether or not you find some of their decisions to be unlikely, remember it is always easier to judge from afar, let alone the crucial need of keeping the fun alive.

If there’s one thing Crawl delivers on, it’s fun. It’s a horror flick, with plenty of buildup moments, jump scares, and alligators chomping on people. The film even finds ways to inject multiple people into the story for the sole purpose of delivering a higher body count. With all of that in mind, it’s not as though the film is trying to be dreadfully scary. One could practically call Crawl a dark comedy, given all of the ways the film stops Haley and Dave from getting out of their predicament.

Writers Michael and Shawn Rasmussen have done their homework. They understand what a film like this needs to work, without overdoing it with excessive padding. The setup is handled quickly enough, but delivering on the thrill of the chase is just as crucial. We’re given just enough time with and without the alligators to see them as a constant threat, while Scodelario and Pepper are given what they need to make their roles and relationship grow in this mostly real-time scenario.

Given the small amount of time they have to leave an impression, both actors are solid. The production seemed to get a kick out of beating up Pepper, but he pulls off the tough dad routine well enough to not have you too concerned with things like the miracle splint he creates for a broken leg. Scodelario works here as well, having had her own share of experience in the genre world, given her co-starring role in the surprisingly decent Maze Runner series (which also featured Pepper in the last two entries). She has more of the heavy lifting to do and does plenty to face the danger that presents itself.

As the director of this slick flick, Alexandre Aja refreshingly restrains himself from going too over-the-top with killer alligator moments. Given the use of mostly CG gators, he seems to understand the less-is-more approach to aquatic horror films, letting the suspense of not knowing where things are underwater do a lot of the work. That doesn’t mean we don’t see gators rip the limbs off at least one unlucky person, but given how this is the first original film Aja has worked on since 2003’s High Tension, I was happy he didn’t feel like he needed to top himself in the brutal violence department.

Crawl is a teeth-gnashing, bone-crunching, white-knuckle thriller. It works the disaster and horror angles quite well while keeping the father-daughter dynamic as affecting as needed. With a quick-pace and a short running time, Crawl wisely understands how to get the most out of its premise, without ever descending too far into camp. Yes, there’s an inherent level of silliness that comes with a film such as this, but that’s where the fun comes in. Accepting Crawl means jumping in and wanting to enjoy yourself; so hop in, the water is fine. 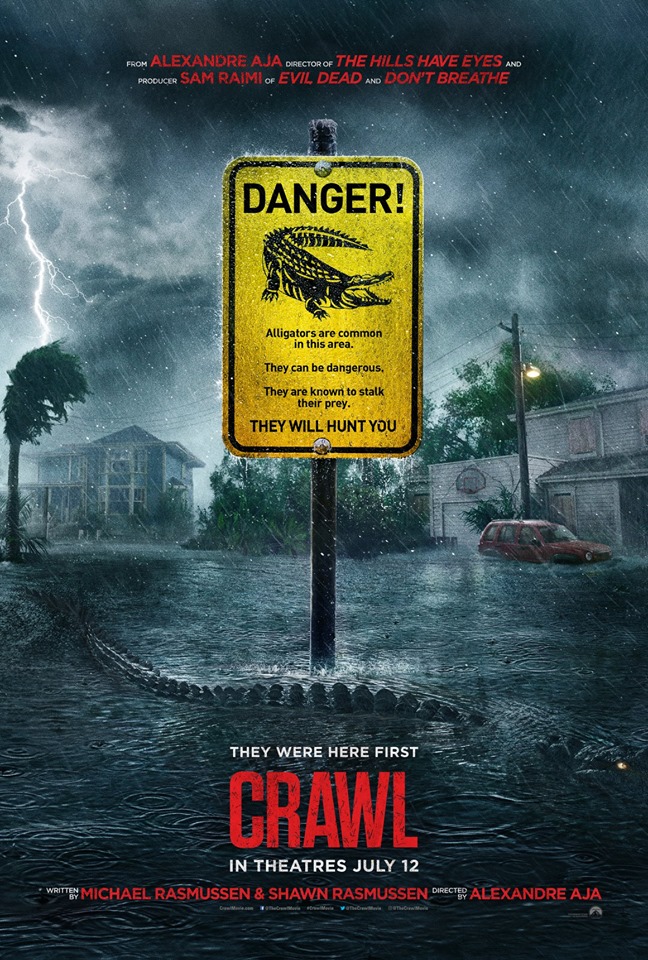