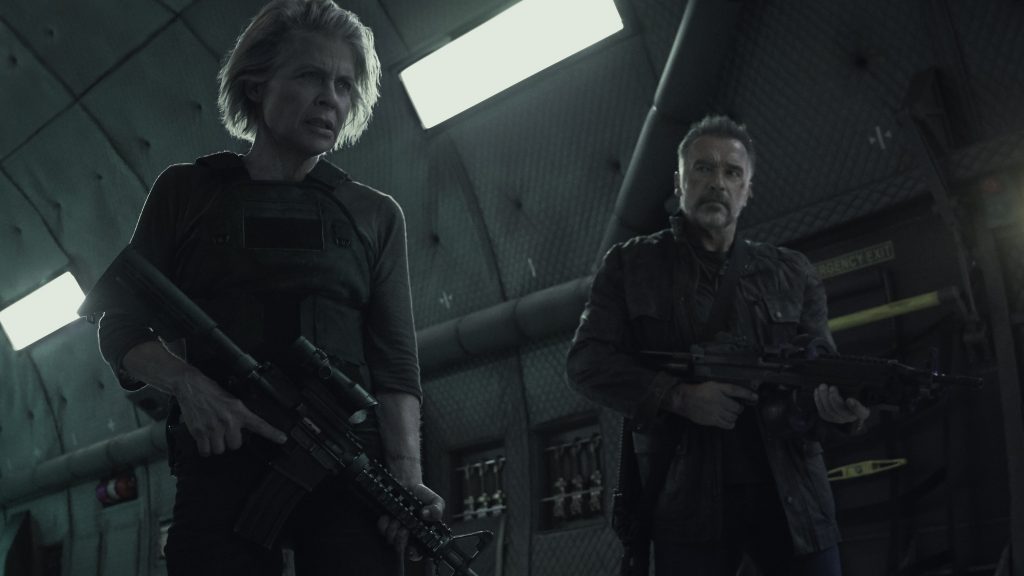 In a modern cinematic world invaded by sequels, remakes, and other forms of franchises, it’s interesting to see which ones audiences and studios are still willing to put their faith in. Terminator seems even odder than something like Jurassic Park or Halloween. Different filmmakers have come and gone. Attempts to create a new trilogy have failed multiple times. Much like the Terminators, there has been a new make and model every so often, but quality always varies. With Terminator: Dark Fate, the ones who started it all are back, and director Tim Miller (Deadpool) was brought on board to see if there was something to make out of the day after Judgement Day. It’s a bumpy road, but this latest machine rises to the challenge.

Along with bringing back star Linda Hamilton, as well as Arnold Schwarzenegger (who only kind of stepped aside for the McG-helmed Terminator Salvation), the real notable return is James Cameron. Stepping in as a producer and one of the several credited story developers, the “King of the World” took time away from Pandora long enough to bring a bit of guidance to a series that’s more or less been chasing its own tail. While the main story being told is not breaking new ground in the world of artificial intelligence on the path to rising up and decimating humanity unless some time travel shenanigans can stop it, the chase has at least become intriguing once more.

Going with the “choose your own adventure” model that allows a series to step away from what other sequels have done and forged a new path, Dark Fate picks up 27 years after the events of 1991’s Terminator 2: Judgement Day. The film begins in Mexico, introducing us to Natalia Reyes’ Dani Ramos. She’s important. We know this because two warriors have been sent from the future for her. One is Grace (Mackenzie Davis), an augmented human tasked with protecting Dani at all costs. The other is an advanced Terminator, model name Rev-9 (Gabriel Luna). 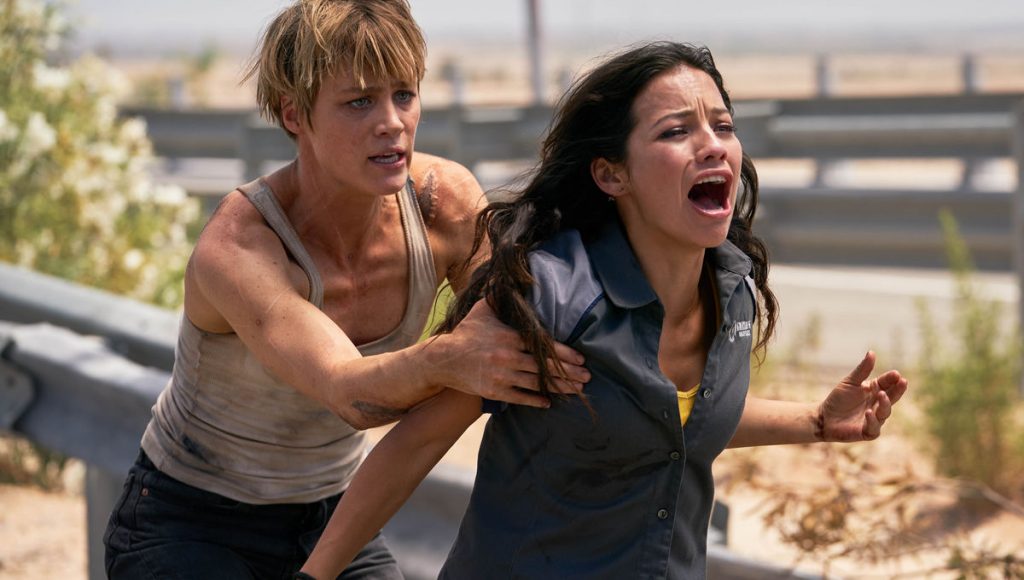 Not too much time passes before all of these characters meet up in the most destructive of ways, and allow the audience a chance to see this new terminator in action. The Rev-9 has some wild tricks up its sleeves, and even its sleeves can become dangerous. Grace is plenty skilled as well, matching the Rev-9 best she can. However, for all the chaotic car chase action that ramps up quickly in the first act, things take an exciting swerve when Hamilton’s Sarah Connor shows up to save the day.

Terminator movies only tend to play with so many ideas. The films primarily work as a game of keep away. Over the years, the action has gotten bigger and crazier, but whether it’s a sped-up chase through the streets of LA, a pursuit set on the Golden Gate Bridge, or a massive aerial battle as seen in this film, the core relies on hoping we want to see the characters outrun the big bad Terminator that’s been unleashed (with an added villainous draw for these killing machines). With six writers involved in making this story work, Dark Fate only gets so far in both reminding audiences of why the first two films were as successful as they were (for the record, I like Rise of the Machines quite a bit), and what could be done to add some new wrinkles.

As far as making a comment on the pervasive use of technology in modern society and the effects it has on things like personal security and “playing god,” Dark Fate doesn’t attempt to reignite any of those conversations. However, in addition to the relatively consistent idea of showing older stars pass torches in long-awaited sequels, the movie is concerned with what kinds of roles it can allow certain characters to have, as well as a question of what it means to be human. One could also have fun thinking about the logic of time travel, based on Grace’s mission and backstory, but that’s more for the YouTube “__ explained” crowd to dig into. 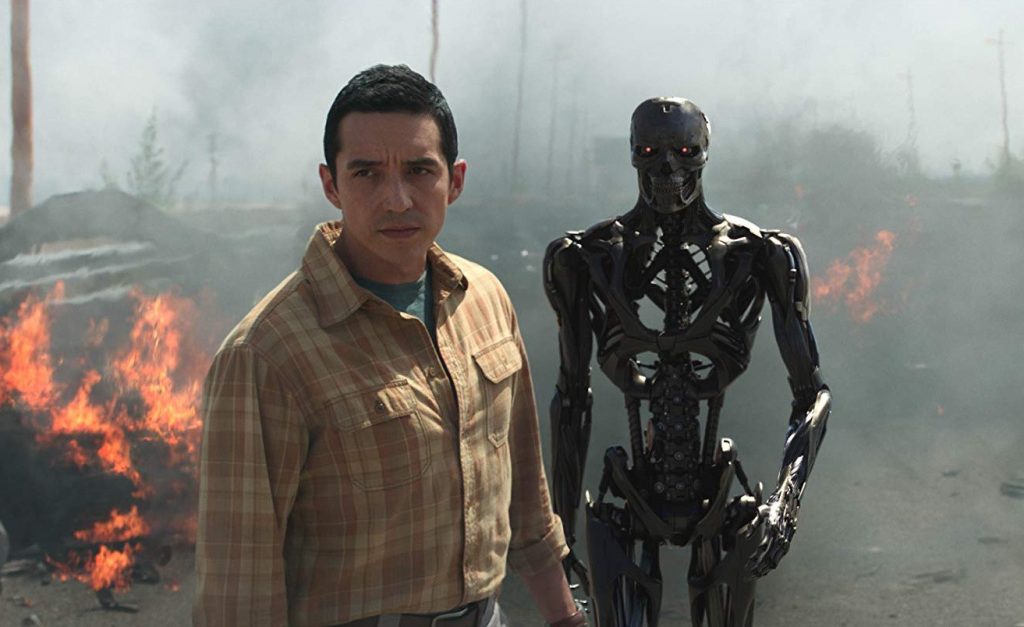 What I’m getting at is the strength that lies in Dark Fate’s second act. The opening is exciting enough, even if Miller’s work as an action director just serves as a reminder of how much better Cameron is than pretty much everyone at this kind of thing. Once these ladies begin talking, however, the meat of the story becomes more evident. Motivations are understandable, and the path for these characters becomes laid out in a way I can appreciate. Then things become even more interesting once Arnold steps back on the scene.

Without getting into the specifics, the T-800 is living in the past as a machine attempting to blend in with the world. Hearing the machine explain what its been doing with its time away from its original programming comes with some humorous touches, as well as some fascinating considerations in regards to what a machine gains from learning to be more than what it was built for.

With all of this, Schwarzenegger brings all the emotional weight he can to an emotionless machine. It’s a tricky performance, not unlike what he made work so effectively in his previous times with this character, particularly T2 and his interactions with Edward Furlong’s John Connor. Still, much like Sylvester Stallone with Rocky Balboa, Schwarzenegger continues to show how much care he has for playing his iconic role, bringing new dimensions to it in the process. 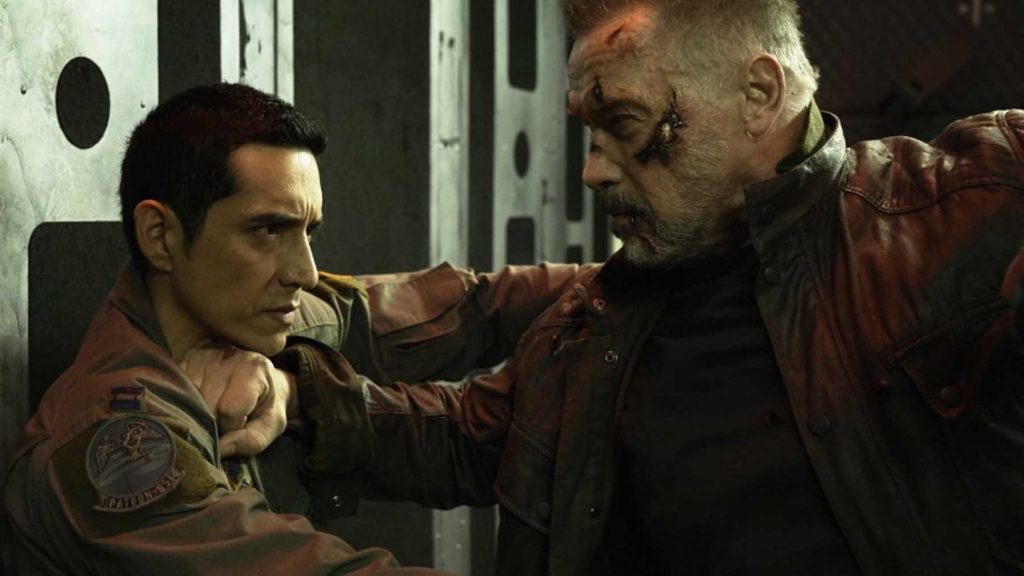 Sadly, the third act pushes away from the intrigue to deal with the situation at hand. There are a lot of elaborate special effects utilized to give us a variety of fights between terminators and humans. Much of it looks very good (action scenes not shrouded in darkness, in particular), but we’ve also seen how this plays out before.

The whole liquid metal concept that allowed Robert Patrick to be a different kind of unwavering threat in T2 is pushed to its extreme here, in a very R-rated manner, allowing Luna’s Rev-9 to destroy practically anything in his way. Various moments work with the sort of intensity this film is going for. Other bits feel to frantically edited or too oblivious in how to establish a sense of weight that comes with machines battling each other. 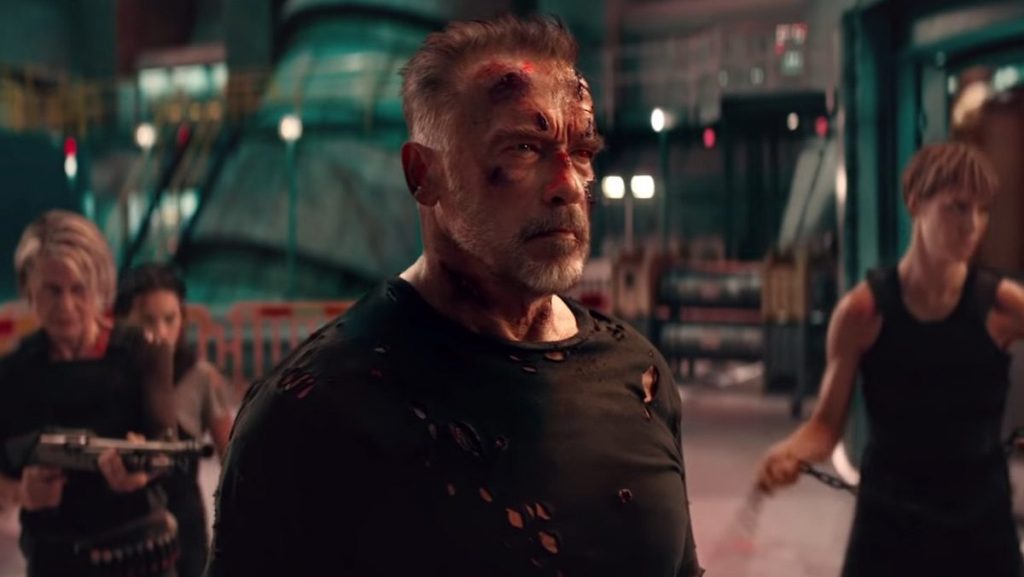 As it stands, Terminator: Dark Fate has an interesting mix of ideas to work with the standard chase movie template this series has relied on. Hamilton is a welcome presence here, growling “mother f-er” as she continues proving her worth in staving off the machine threat. Schwarzenegger gets his time to shine as well, while Davis is a strong enough presence as the other machine-like individual serving as a protector.

Outside of coming to understand the cool conceptual ideas this film relies on, however, there’s little here to help it stand on a higher level with more advanced entries. The action is fine, but never quite as exciting as it could be, and waiting to address specific reveals only underlines how rote it is to watch another fight for the future when we know the end result is still going to be a wasteland strewn with human skulls. This is still a welcome return for a series that suffered from near termination thanks to the previous two entries, particularly Terminator Genisys. The upgrade isn’t entirely successful, but is it good enough? Affirmative. 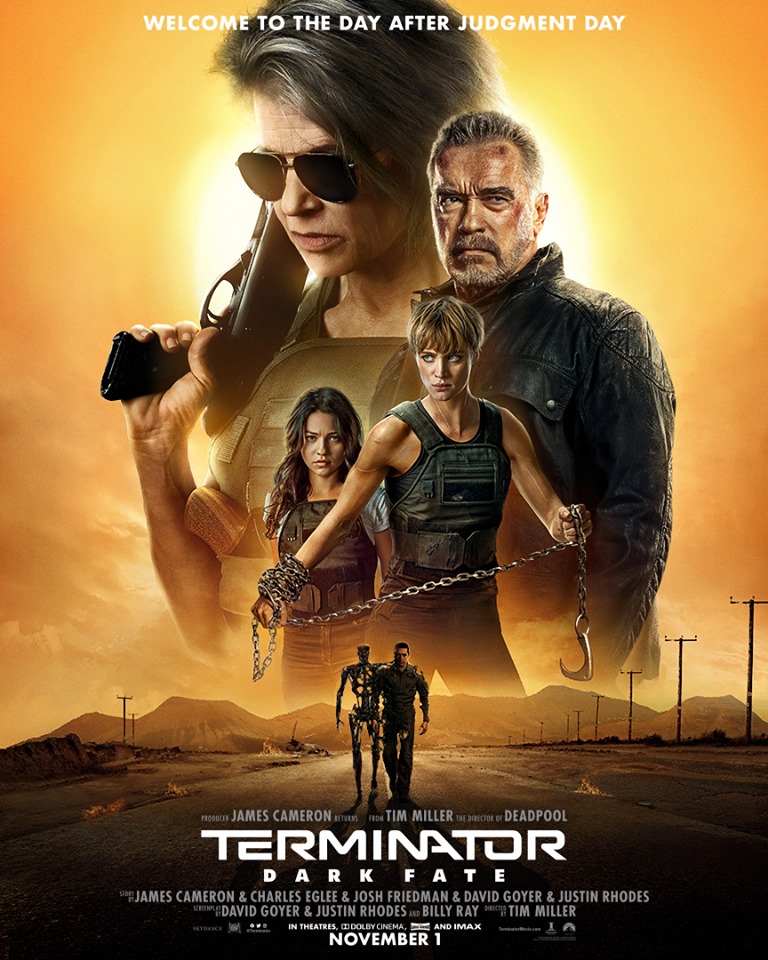