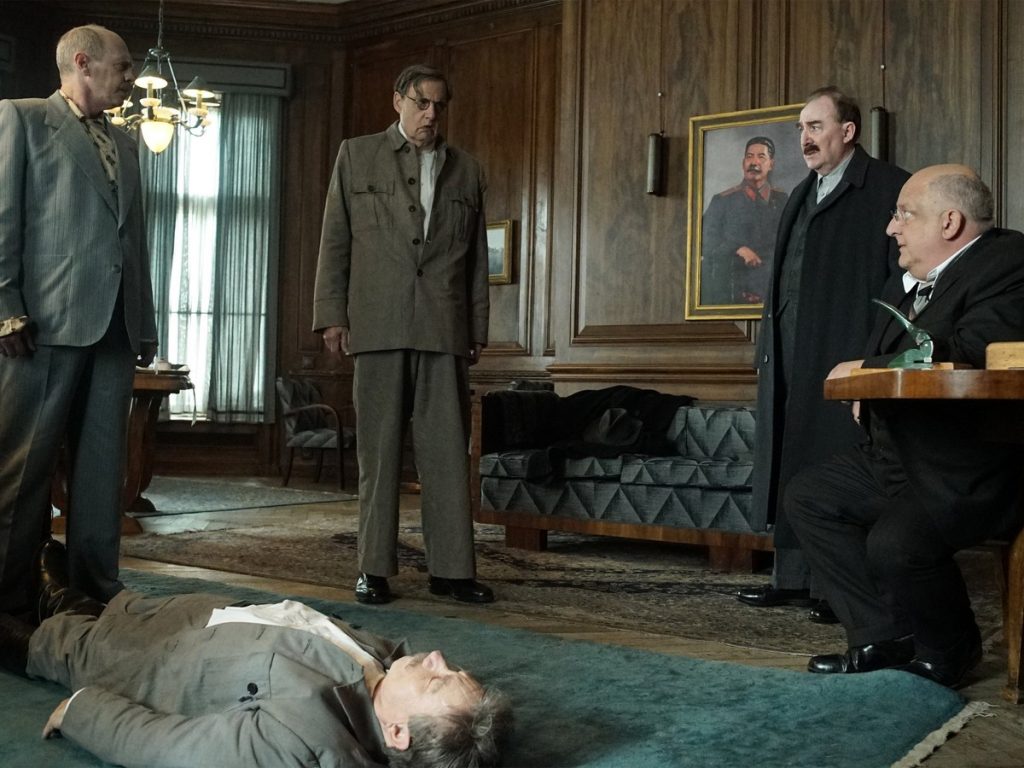 Given my affinity for the style of humor writer/director Armando Iannucci (Veep, In the Loop) traffics in, there is no doubt that few films this year will match the amount of joy I took from The Death of Stalin. Here’s a movie that gets a ton of laughs from its use of language and broad comedy in the midst of desperate times. So, of course, that means it’s all about politics and the frightening fact that much of the story is merely telling a toned-down version of things that transpired in the days of Soviet dictatorship.

The Death of Stalin plays as a recreation of the events that transpired following the death of the infamous Joseph Stalin (Adrian Mcloughlin). As the film is constructed as a political satire with little intention of taking exact details literally, the cast is primarily made up of British and American actors. Serving the film even better is the lack of interest in utilizing faux-Russian accents, because why would Russians speak English with Russian accents among each other anyway? Given the way with words Iannucci has, it certainly makes it easier to let the rapid-fire dialogue and improvisations play out through the natural voices of actors, giving the film a range of accents from Brooklynese to cockney.

The cast consists of Steve Buscemi being classic Buscemi as Nikita Khrushchev, Simon Russell Beale as the horrible Lavrentiy Beria, Michael Palin back in prime Monty Python form as Vyacheslav Molotov, and Jeffrey Tambor as the nervous wreck version of Georgy Malenkov. I can’t pretend to be an expert on critical Russian parliament figures, but I can say these personalities do plenty of work to provide a perspective on how chaos could erupt following the death of a harsh dictator. That’s not even the end of the cast, as Paddy Considine, Rupert Friend, Andrea Riseborough, Olga Kurylenko and a scene-stealing Jason Isaacs are all on hand to further add to the lunacy of the events that transpire.

Much of the film surrounds the arguments and antagonism shared between Stalin’s cronies, as they all make various power plays to establish a new leader, let alone do what they can to keep from being executed. Using multiple locations in England and Ukraine to serve as a depiction of the Kremlin, Stalin’s Residence and other key settings, there is a conscious attempt to make this film have a level of authenticity applied to period dramas. Twisting it in a different direction, however, Iannucci’s sense of understanding an atmosphere only helps to amplify the high level of comedy seen in the squabbling that occurs between powerful men.

Already banned in Russia and met with a litany of claims that bring into question historical accuracy (not that the cinematic license for a satire isn’t being considered), The Death of Stalin does not hold back in portraying a lot of intimidating Russian officials as buffoons. Buscemi’s Khruschev arrives at the scene of a presumed dead Stalin’s bedroom in his colorful pajamas. The fight for power leads to scenes where characters race back to their cars on foot, hoping to be first in line to particular events. Friend’s drunken portrayal of Vasily Stalin leads to all sorts of ridiculous moments (many inspired by his actual actions, such as attempting to cover up the plane crash of a Russian hockey team by training imposters).

So much of this film seems to ride the line of absurdity, but Iannucci finds ways to curve his sense of humor. While always functioning as a comedy, darker moments arise, particularly when involving Beria (who again, was a horrible person). If The Death of Stalin begins as a broader comedy of manners, it makes a shift towards being a pitch black comedy where lives are actually on the line. Certain characters have an arc that allows the film to register on a level higher than a farce, and the finale makes some bold choices representing a condensed version of history that accommodates for both laughs and shock. One could say this film is more in line with a conventional narrative than the erratic and hysterical nature of In the Loop, but I found Iannucci’s handle on his subject to show growth for the filmmaker nestled inside the satirist. 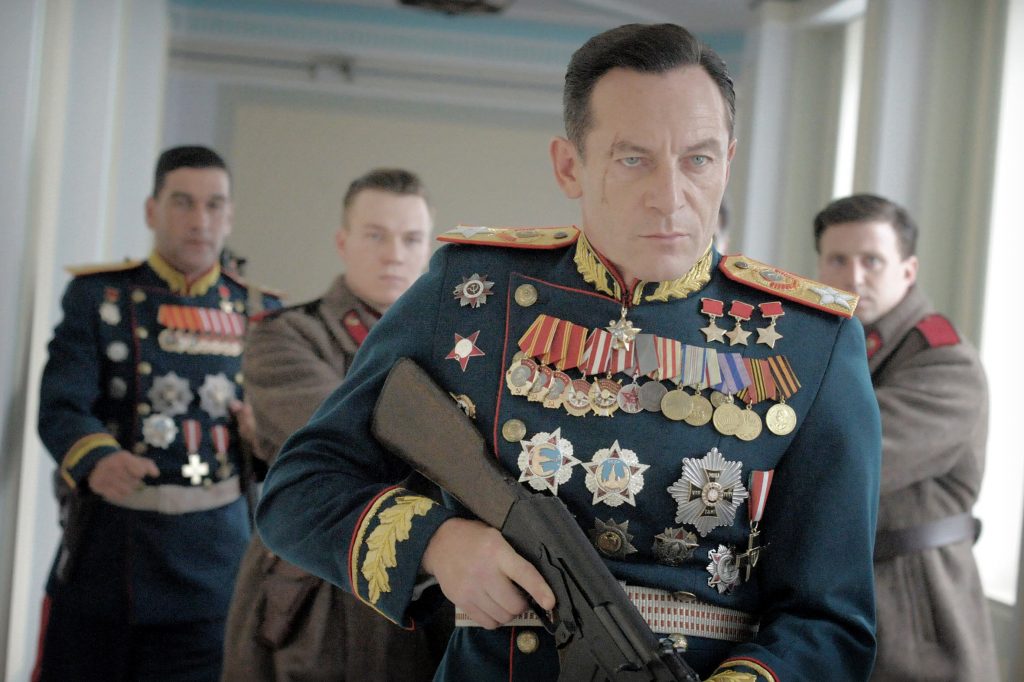 While based on a French graphic novel by Fabien Nury and Thierry Robin, Iannucci initially intended to make a film composed of fictional characters in a country only similar to something along the lines of the Soviet government at that time, let alone current regimes fueled by corruption. Perhaps something like that will come in the future for another hilarious Iannucci project, but The Death of Stalin was a great way for the filmmaker to put his comedic takes on actual history. While he’s taking plenty of jabs at the Soviet powers from that time, he establishes a point concerning what it means to want power by way of oppressive leadership and the struggles to function in a world where non-commitment to someone else’s ideas could lead to death.

As drastic as some of this sounds, The Death of Stalin still registers to me as one of the funniest films I’ve seen in some time. It’s terrifically acted by all involved, as each performer brings a sense of understanding to Iannucci’s words while playing up their improvisations and inspired physical moments to emphasize the absurdity of their situations further. There is some understandably bleak history to look at in regards to what the film is satirizing, but the best movies of this kind know how to bring in a perspective that doesn’t take away meaning from reality. The Death of Stalin accomplishes as much, for the film is a blast to watch, but not oblivious to the severity of its events. 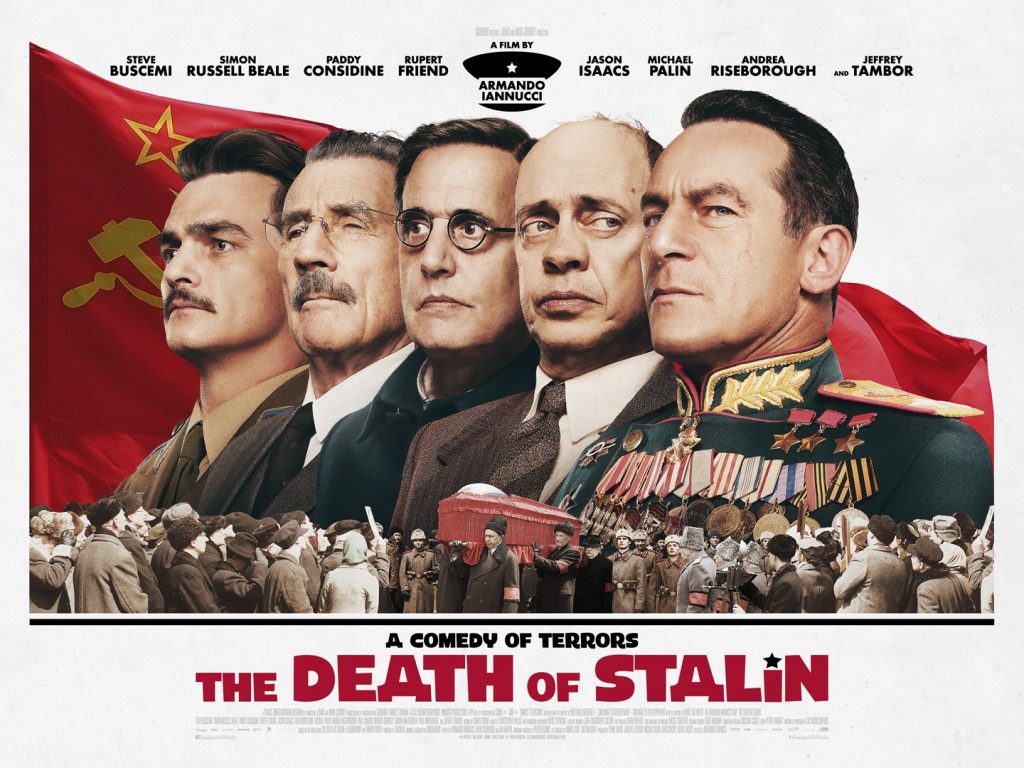