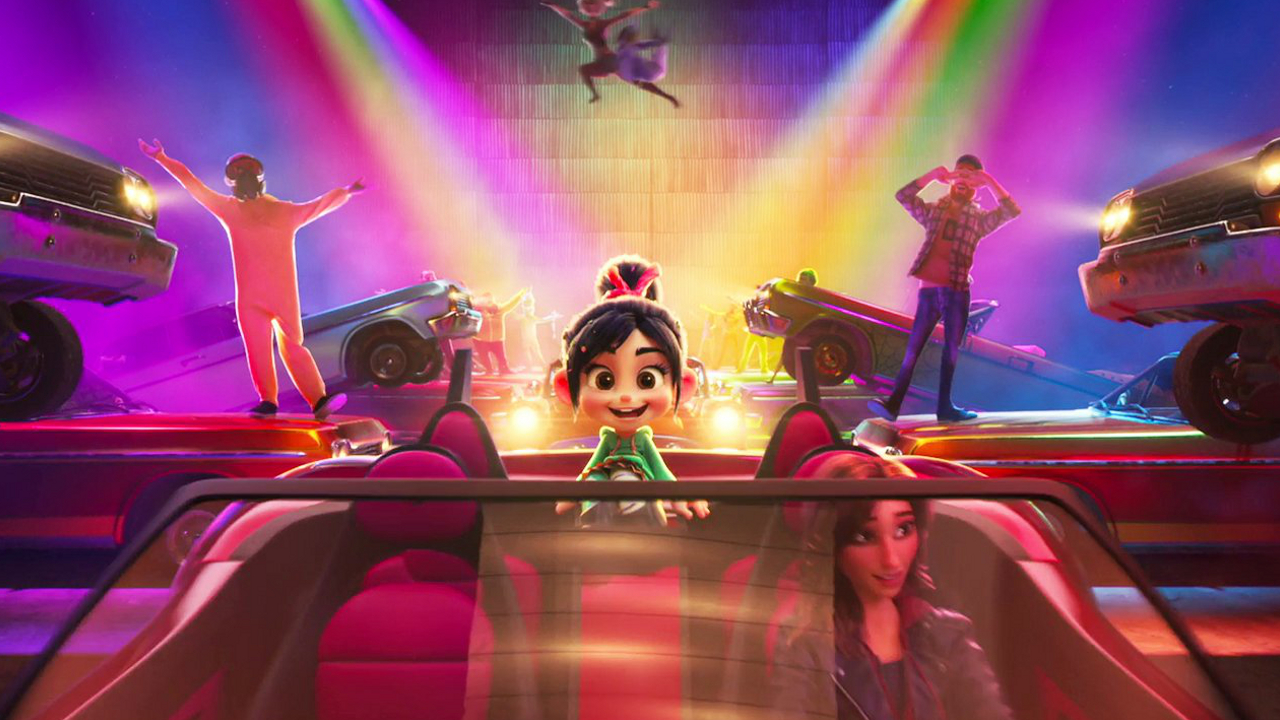 2012’s Wreck-It Ralph was one of those rare occasions where the realm of gaming connected seamlessly to film. Deviating from the studio’s princess-heavy formula, Disney’s 52nd animated feature turned its attention to gamers of all generations. Centered around a heartwarming tale about friendship and acceptance, Wreck-It Ralph truly leveled up in this second Disney Renaissance. Six years later, the game’s not quite over yet as the misfits at Litwak’s Arcade go on an even bigger adventure in Ralph Breaks the Internet.

In present day, Ralph (voiced by John C. Reilly) is more complacent with his job within the Fix-It Felix Jr. arcade game. The same can’t be said about his best friend, Vanellope (voiced by Sarah Silverman). The lead Sugar Rush racer has grown bored with her candy kart game, desiring more than the mundane tracks she’s driven for countless years. Due to a mishap with the game’s steering wheel, Sugar Rush is temporarily put out of commission unless a replacement part can be tracked down. After nearly 35 sheltered years in the arcade, Ralph finally becomes aware of eBay’s existence, sending the faux bad guy and his pint-sized counterpart online.

Ralph Breaks the Internet was fated to dance around a creative minefield for its inception. You can’t venture into an Internet-based narrative and not expect a slew of memes and universal branding. That’s evident the moment, Ralph and Vanellope step into the physical cyberspace. Ralph Breaks the Internet treats the overall scope on a literal level. From eBay to Twitter to an overworked autofill search bar, it’s hard to imagine any other film with this mountain of references. Fortunately, this is no repeat of The Emoji Movie’s cynical cash grab well over a year ago. While there is an undeniable bombardment of product placement, its purpose is secondary to Ralph and Vanellope’s personal journeys. We’ll have to see how well all of this holds down the line or if the sequel runs the risk of dating itself quickly.

Co-directors Rich Moore and Phil Johnston aim for a grander approach with Ralph Breaks the Internet. Unfortunately, the sequelitis route sacrifices some zippy and charming nature found in the original. Post-apocalyptic racing game, Slaughter Race, outclasses Vanellope’s sweet Sugar Rush at every turn. However, it’s one of the film’s many “go big or go home” check marks. At least Slaughter Race introduces hot-shot racer, Shank (voiced by Gal Gadot). She’s an immediate role model for Vanellope and drastic alternative to Ralph’s constant clinginess. Many of the first film’s beats are played to greater scale as well. Vanellope and Ralph’s friendship is tested at one moment in the film, raising those sequelitis stakes. Ironically, the same can be said about the finale, which fizzles out despite being film’s largest set piece.

Ralph Breaks the Internet makes the cross-branded detour to Oh My Disney, a digital world populated by the studio’s various branches. While it’s public knowledge that Disney owns Star Wars, Marvel, Pixar and the princess line, there’s just something special seeing these entities converge for the very first time. Unconventional Disney princess Vanellope shacks up with her fellow animated royals in Oh My Disney, poking fun at the tropes in the process. Vanellope could care less about tiaras and princely rescues, humorously yearning for the perils found in Slaughter Race. Scenes like this offer her the opportunity to evolve beyond the original programming.

Elements from Wreck-It Ralph still remain, but this is clearly Ralph and Vanellope’s story in high gear. Supporting characters such as Fix-It Felix (voiced by Jack McBrayer) and Calhoun (voiced by Jane Lynch) are relegated to near-cameo roles. Gadot’s Shank is a welcoming addition to the cast as is Taraji P. Henson’s exotic algorithm, Yesss. Alan Tudyk returns for a second round, ditching the King Candy role for literal autofill, KnowsMore.

The connection’s clearly not as strong as the 2012 original. Despite obsessing over its new atmosphere and time-sensitive references at its disposal, Ralph Breaks the Internet still finds the time to find some of that signature Disney heart.