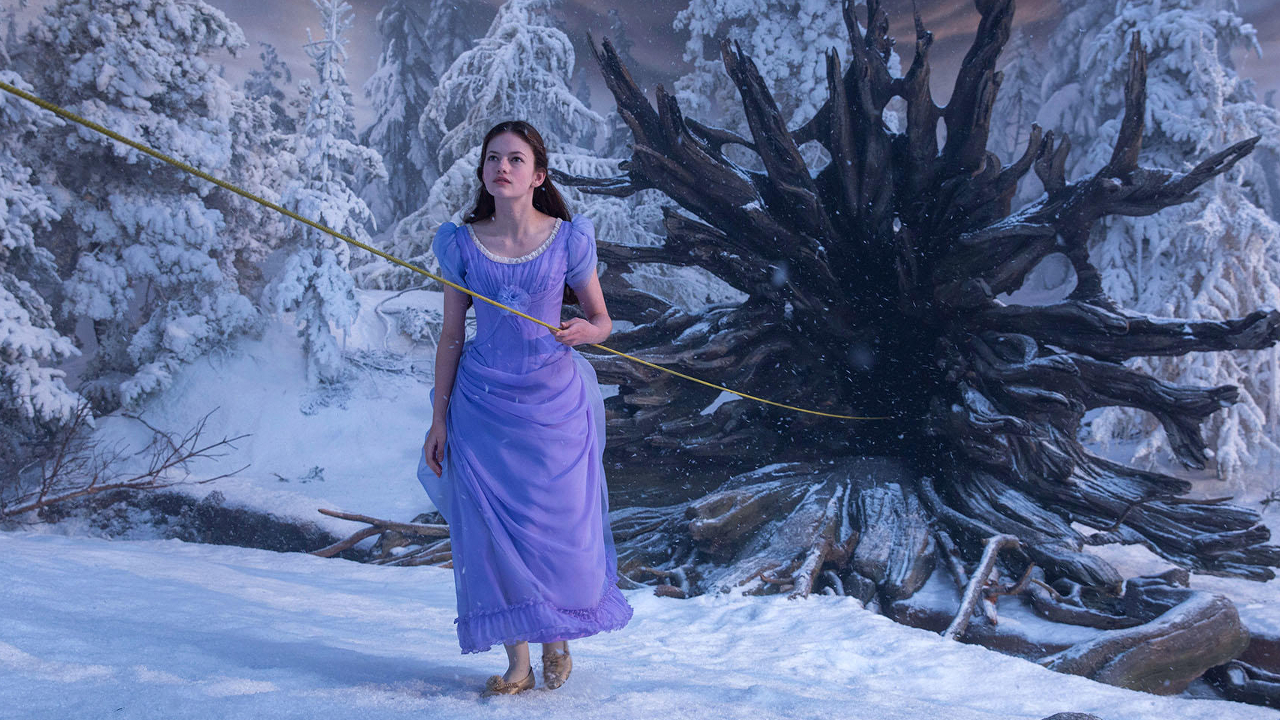 Over the past 15 years, Disney’s garnered plenty of success thrusting its unexpected heroes into an array of whimsical fantasy lands. The studio’s The Chronicles of Narnia: The Lion, the Witch and the Wardrobe and Alice in Wonderland proved that formula worked time and time again. Now warming up for the holiday season, The Nutcracker and the Four Realms toys with that concept once more, sending the  Tchaikovsky ballet off its traditional rails.

Make no mistake, The Nutcracker and the Four Realms is inspired by the Tchaikovsky ballet and the E.T.A. Hoffmann story, “The Nutcracker and the Mouse King.” Familiarity, however, loses its way without question. That’s much like young Clara (Mackenzie Foy), feeling lost while coping with her mother’s recent passing. On Christmas Eve, she and her family are invited to a grand party at her godfather Drosselmeyer’s (Morgan Freeman) estate. While attempting to retrieve her Christmas gift from Drosselmeyer, Clara follows her name attached to a string, ultimately stumbling into the CGI-heavy Four Realms.

Clara quickly learns that her deceased mother was once the beloved queen of the Four Realms. In her absence, Mother Ginger (Helen Mirren) and her rat army waged war on the other regents, Sugar Plum (Keira Knightley), Hawthorne (Eugenio Derbez) and Shiver (Richard E. Grant). With the loyal Nutcracker (Jayden Fowora-Knight) by her side, it’s up to Clara to play savior of the realms. If it wasn’t for branding, The Nutcracker and the Four Realms should be more accurately renamed Clara and the Four Realms. Just food for thought.

To its credit, The Nutcracker and the Four Realms is one of those films that basks in gorgeous costume design and set design, albeit the practical ones. Guy Hendrix Dyas’ keen eye envisions a beautifully-constructed sets for Drosselmeyer’s estate in the first act. The same can be said about Foy and Knightley’s elaborate otherworldly get-ups thanks to Academy Award-winner Jenny Beaven. James Newton Howard’s score lends some charm as well. Otherwise, The Nutcracker is an artificial CGI-fest done plenty of times before by Disney. Clara’s mother was queen of what – a patch of land little more than walking distance, some rats and wooden toy soldiers.

Coming off of The Twilight Saga: Breaking Dawn – Part 2 and Interstellar, it’s good to see Mackenzie Foy coming into her own as a lead actress. She emits her fair share of girl power as Clara, though it’s written perhaps a bit too easily. Not even a day in the Four Realms and she’s trying her best to be a seasoned military leader overnight. There’s some fun, but minimal weight to the character or overall circumstances. Keira Knightley gets to ham it up as the bubbly, fairy-like Sugar Plum. She’s possibly a dead ringer for Elizabeth Banks’ Effie Trinket in The Hunger Games. Even with veteran actors like Helen Mirren and Morgan Freeman, The Nutcracker and the Four Realms fails to go beyond a hollow holiday adventure.

The combined directorial talents of both Lasse Hallström and Joe Johnston just couldn’t make this version of The Nutcracker come to life. Both directors tend to be hit-and-miss, though the directorial duality was split between Hallström’s principal photography and Johnston’s reshoots. As a result, the vision comes off as a jumbled product. If anything, The Nutcracker puts its strongest foot forward before even venturing into the Four Realms. Clara wandering around the halls of Drosselmeyer’s and joyous party guests dancing put you in the mood for Christmas instantaneously. Unfortunately, the final hour is oblivious to the whimsical charm that satisfied the beginning. For what it’s worth, The Nutcracker does still crank out the classic “Dance of the Sugar Plum Fairy” and a backstory-ridden ballet, keeping with tradition.

The Nutcracker and the Four Realms was surely intended to be an early holiday gift from Disney. Can we simply refuse and send this recycled present back where it came from?

Review: Disney’s ‘The Nutcracker’ Dances to an All-Too-Familiar Fantasy Tune