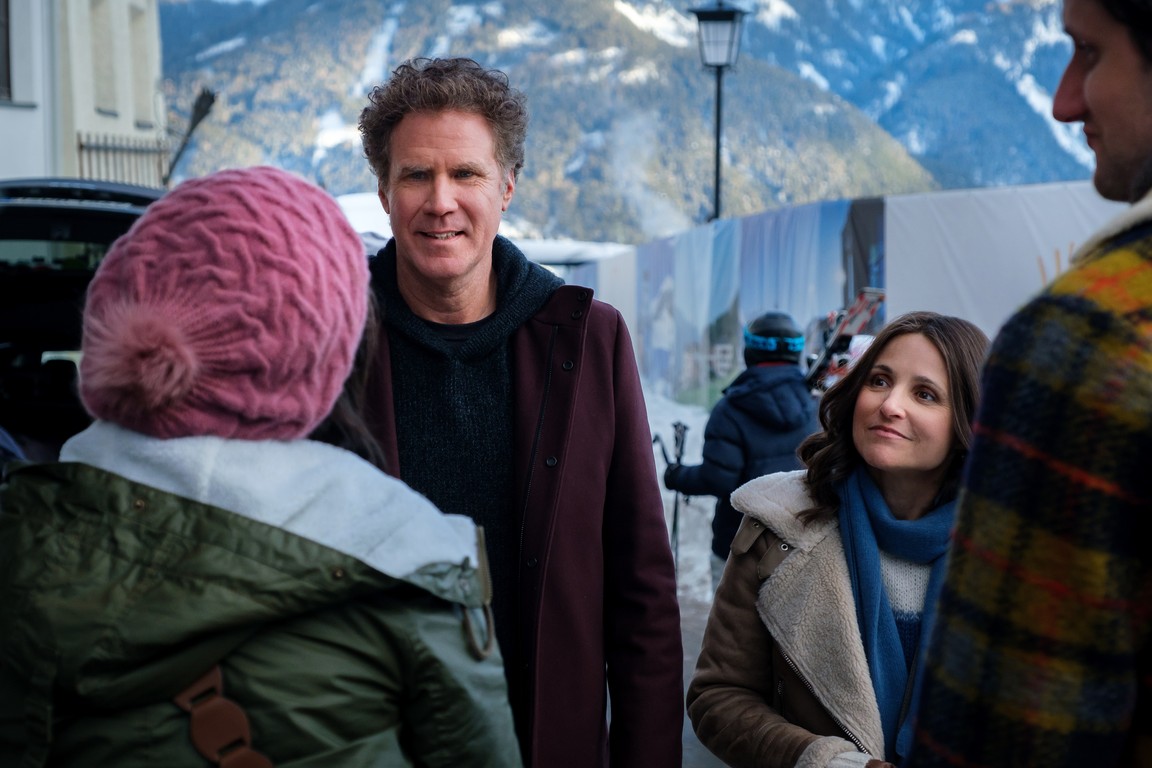 When covering a remake, some may feel challenged in trying not to mention or compare the original film for the sake of doing justice to a different version of the same material. I see no reason not to here. Downhill is a remake of the terrific, darkly-tinged Swedish comedy Force Majeure from 2014. It is almost too perfect for noting this Americanized update is more than half an hour shorter than the original film, as it feels as though the edges have all been shaved off for the sake of a more broadly appealing comedy. There are moments where the actors and the material that’s been adapted suddenly spring to life. However, for the most part, it really feels like this film took a powder.

Downhill stars Julia Louis-Dreyfus and Will Ferrell as Billie and Pete Staunton, a married couple on vacation in the alps with their two children. Early into their ski-filled fun, a controlled avalanche appears during an outdoor breakfast. Looking much more threatening than it should, while Billie holds onto her children, Pete runs off in the heat of the moment, driving a wedge between everyone. Why this reaction? What do the Staunton’s do now? The rest of the vacation is driven by a lack of assuredness with plenty of dramatic and comedic repercussions.

Just recapping the plot makes me smile. What a brilliant way to open a film – a display of an act most cowardly that must now be followed by the rest of the movie’s runtime. That sense of awkwardness could easily provide plenty of material for seasoned comedic pros like Louis-Dreyfus and Ferrell (and their proven dramatic chops should similarly work in their favor). Alas, co-writers/directors Nat Faxon and Jim Rash never find the proper read on how to best play the film. 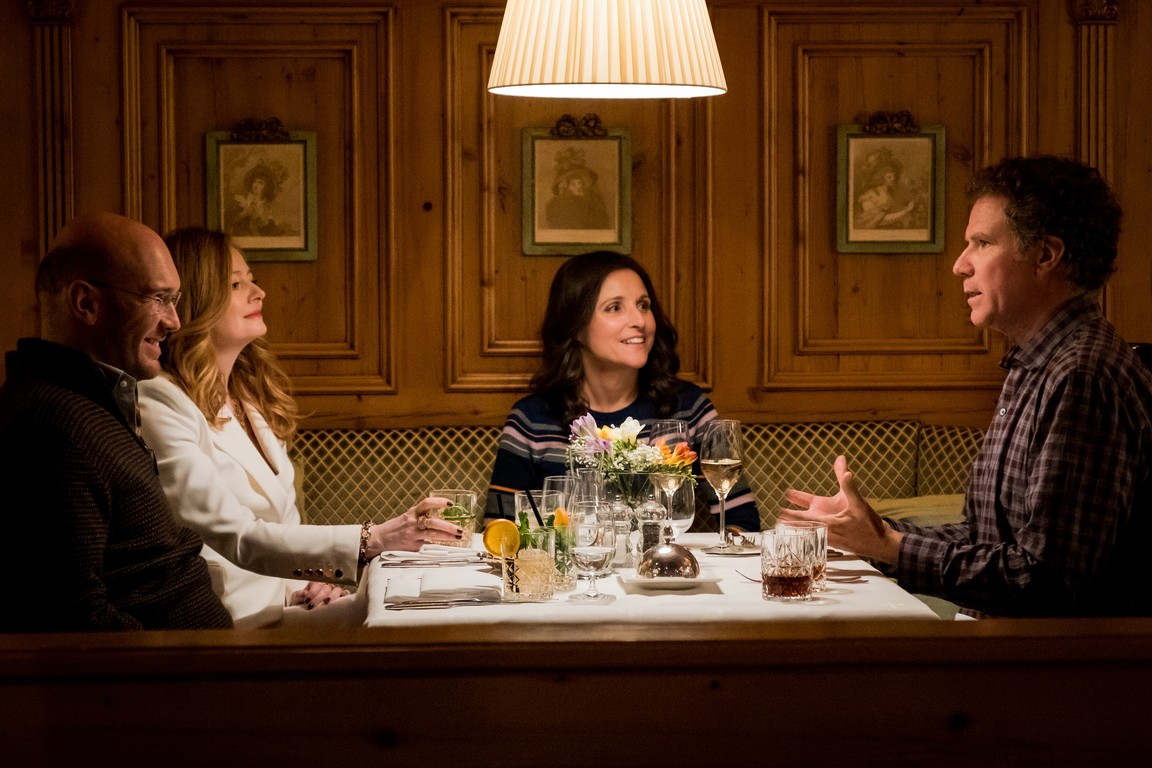 At its best, Downhill equips the actors with the right level of cutting dialogue that finds dry humor in the sharpest of barbs hurled at one another. When comedy isn’t required, the film finds similar success when fully engaging in dramatic moments. Louis-Dreyfus, in particular, does a lot of good in handling her scenes, recalling what took place, expressing her discomfort, and directing her anger. Ferrell feels outmatched in these scenes, and for good reason.

Both this film and Force Majeure work as studies of masculinity. The best discussions in these films revolve around the status of the father of the household, how to handle certain situations, and assessing the alternative actions. Ferrell’s Pete is emasculated by his own actions, and much of his part in this film finds him balancing that state of mind with the hallmarks of a man going through a midlife crisis. I wish he felt more up to the task. As opposed to his great and underplayed work in 2011’s comedy-drama Everything Must Go, Ferrell feels too relaxed for the role.

This could come down to the way this version of the story has taken shape. Force Majeure works incredibly well because of its sharp dialogue, lack of restraint in wanting to go for the cringe-inducing nature of the comedy, and the effort to really draw out moments to maximize the impact. Downhill feels like it’s in a rush to get to the various highlights stemming from the situation this family is stuck in. Big fights, seeing the kids react, watching the couple go their separate ways for a day, more arguments, etc. Despite having a chance to take in the snowy scenery fit for a screensaver, as one character describes, not even Danny Cohen’s nice cinematography does enough to let the film breathe. 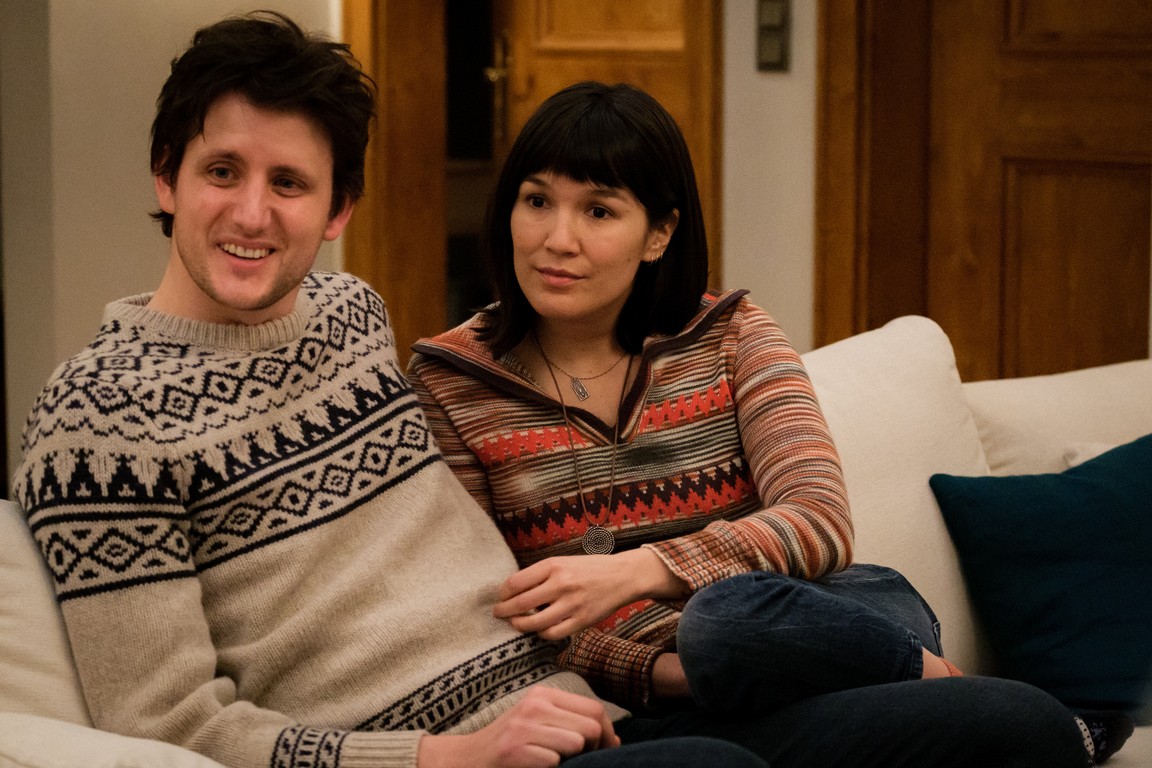 Some supporting characters do their best to liven up things. A younger couple (one of Pete’s co-workers and his new girlfriend) played by Zach Woods and Zoe Chao get in good laughs as folks caught in the middle of things. Mirando Otto is wildly over-the-top but amusing as an over-sharing hotel manager. Even Kristofer Hivju (best known for Game of Thrones, but a supporting character in the original film) has a fun cameo. All of these actors seem game to play along, but the film still feels like it’s off several beats from knowing how to truly make this premise work as well as it did the first time around.

The resulting film ends up being a frustrating mixed bag. Ferrell and Louis-Dreyfus could probably make a great pairing elsewhere. Here, while intentionally awkward, there’s never enough of a chance to really like this duo as a married couple. Downhill manages to peak early on when the couple has their first major argument, so the rest of the film just goes down its necessary path until some sort of catharsis takes place. It could prove amusing to those not familiar with Force Majeure, but I’m here to say that’s a film far more worth the time. As far as Downhill goes, the problems snowballed into an avalanche of missed opportunity. 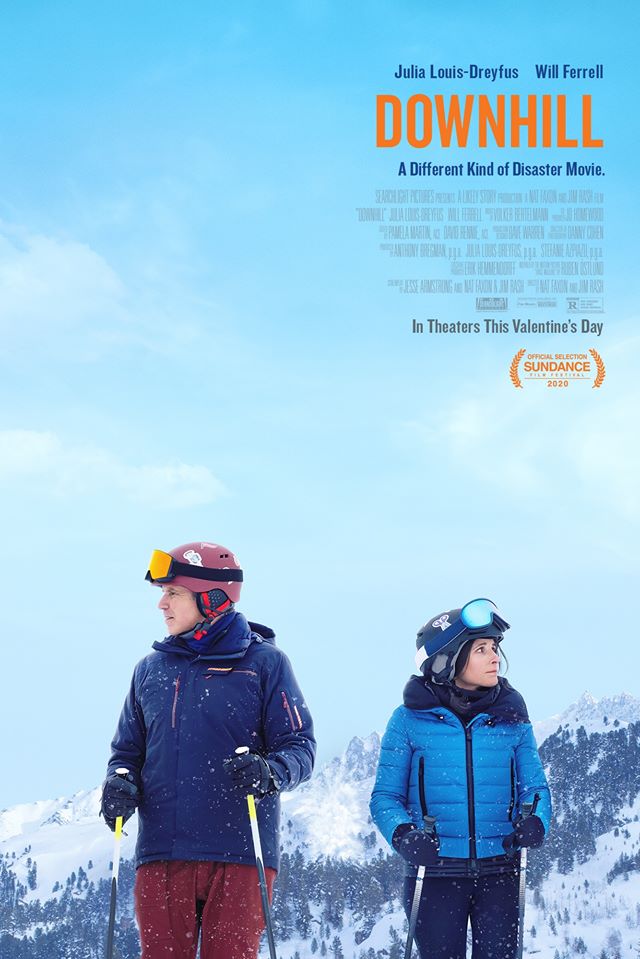