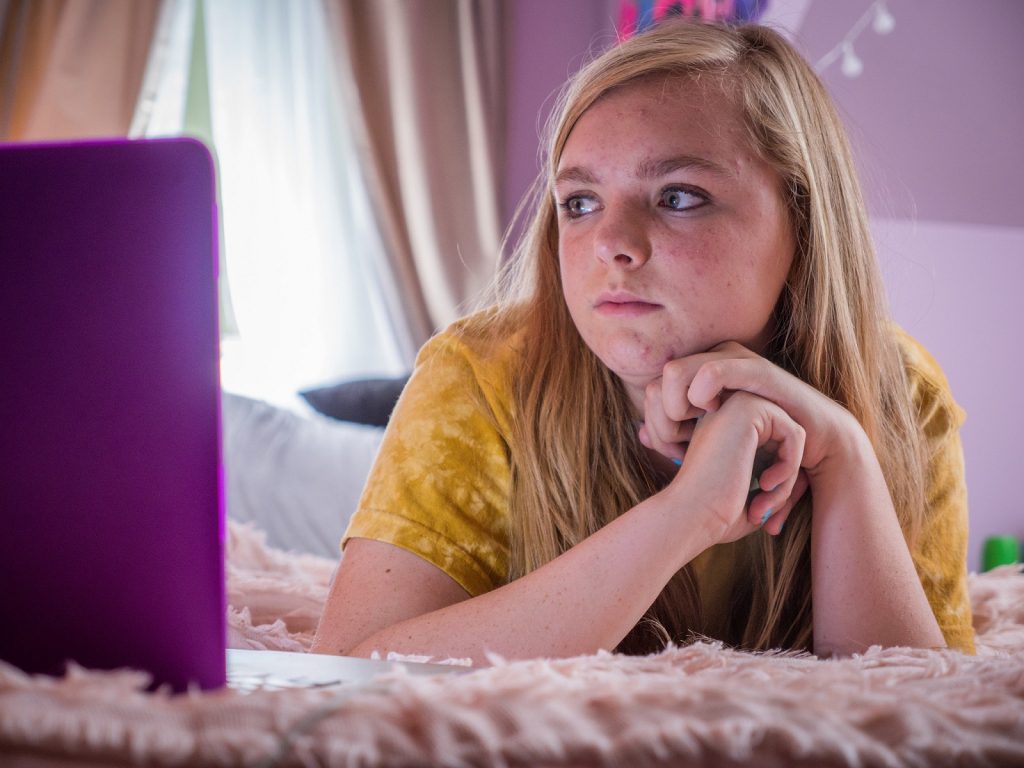 I wasn’t a fan of eighth grade, as I enjoyed my high school years more. Eighth Grade the film, on the other hand, is a pitch-perfect look at the awkwardness of adolescence. Even as filtered through the lens of a contemporary teenage girl, there are plenty of relatable elements to a time in everyone’s life when things are changing in a variety of ways. The balance between nerves and confidence is vital, as it can make or break the kind of person one chooses to portray themselves as at the one place that matters at that time – middle school. Writer/director Bo Burnham captures this quality quite well in his debut feature film, which is made all the more impressive by an impressive breakout performance from star Elsie Fisher.

Fisher stars as Kayla, a 13-year-old who has had a rough time dealing with middle school. The film takes place during her final days as an eighth grader, before graduating and moving on to high school. Within this time, we get a slice-of-life styled understanding of how things have been going for Kayla, and where they could be headed.

The plotting is just that simple, but this is a character piece, pushed through the Snapchat filter of an A24 comedy-drama. That’s not to say its derivative, but there’s only so much to glean from a coming-of-age story such as this. Eighth Grade looks nice and all, with some nice messages to share, but what matters more is the effectiveness of the writing and the performances. 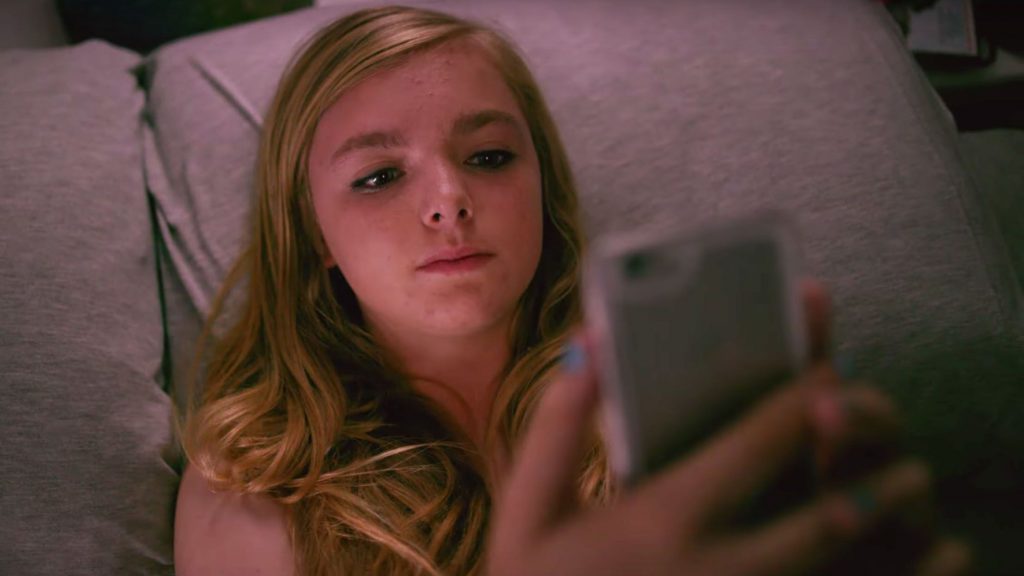 Crafting a story around an eighth-grade girl in the 2010s seems like an idea rife for a certain level of parody, but the brilliance of this film is how authentic it all feels by naturally incorporating the trends of the time. I may not be familiar with all the fads the younger generation is hip to these days, but the constant use of smartphones and social media is indeed something that rings true and finds a place in this film that speaks to some inherent comedy. It may feel like a sad reality at times as well, but that’s where the excellent character work comes into play.

While Kayla’s presence at school mostly goes unnoticed (she is voted “most quiet” much to her chagrin), we get to know a lot about her for the opposite reason. At home, she makes YouTube videos that offer advice to anyone that watches. There’s something truly wonderful about the level of energy and awkwardness she brings to these videos. Whether talking about “growing up” or “putting yourself out there,” the character narrating these videos is precisely the person Kayla wants to be.

Wisely, the film never goes out of its way to push Kayla into specific directions for the sake of plot machinations. Instead, it sits back and finds the opportunity to reflect the videos Kayla makes with (or against) the actions she takes in reality. This means getting to see Kayla attempt to take her own advice, which sometimes results in mild humiliation, but more often keeps the audience aware of just how much of a great person Kayla is. 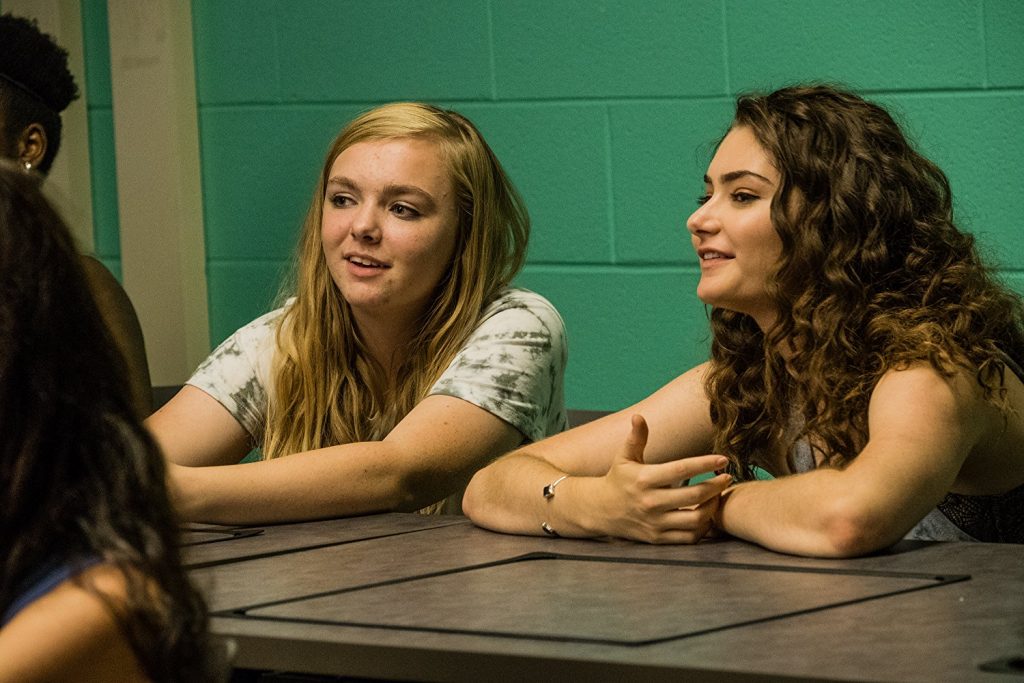 Sure, Kayla spends a lot of time on her phone, scrolling Instagram and taking dramatic selfies, but she still wants to be a force of positivity. Videos about giving advice are a concept only done because Kayla wants to. She may not need to be friends with the snotty, popular girl, but Kayla still puts effort into making the best of a situation when she has to go to a pool party. There comes the point when Kayla meets a high schooler, who sees the person Kayla is an instantly accepts her. She’s right to do so, as the film has done what it needs to show what kind of pleasant person Kayla is, but without overselling it.

Things do start out a bit tricky at first, but it’s also the lead into one of the film’s other great dynamics. Josh Hamilton co-stars as Mark, Kayla’s wonderful father. Here’s a guy who’s the single dad to a teenage girl. He doesn’t know what to do, but he tries with his version of advice and obvious love for his daughter. He makes dad jokes and tries to provoke conversation, which usually blows up in his face, but he never gets angry. Mark tries, and he listens. It’s the kind of thing that could make Kayla seem irritating, but the film backs her up by establishing her hobbies and keeping us aware that it’s a teenage girl, and they can be inherently annoying and still likable (unlike the popular girl we meet).

As Eighth Grade enters the final third of its 90-minute runtime, certain amounts of drama crop up, but there’s still a good balance of awkwardness and assured filmmaking. This means finding ways to subvert big speeches and moments that go out of their way to spell out the message. It’s the proper play for Burnham, an already successful stand-up comedian who traffics in subverting audience expectation while on stage. I may not know how he came to write such a story about a teenage girl, but he has indeed found all the right ways to tell it. 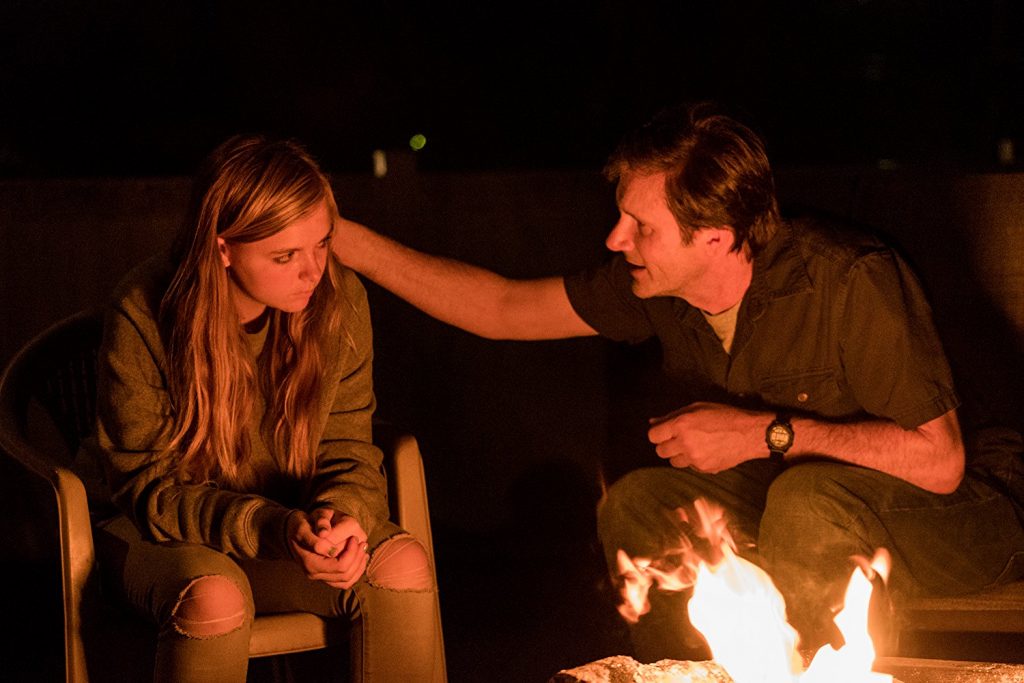 Burnham also knows how to mine plenty of comedy out of the various scenarios we see. Whether cringe-inducing or just plain funny, Eighth Grade gets a lot of laughs out of the viewer thanks to an understanding of how these characters speak and what kinds of things they are into. Fisher excels at the uncomfortable tongue-tied angle, as she attempts to navigate talking to boys or potential friends. The rest of the film adjusts as it needs to in providing plenty of humor to work around her. Whether it’s the banality of middle school or adults attempting to be hip, this film is both truthful in its presentation and very funny.

Eighth Grade is a real winner. It has plenty of charm in how it presents Kayla and keeps us invested in her struggles. There’s a sincerity to all that we see, with a real effort to avoid certain elements that tend to feel inevitable in coming-of-age stories. And the film is really funny. Cringing at situations may not always work for everyone, but there’s so much to like here, that I can imagine many may either attempt to look back fondly at their youthful school days, thanks to this film or just be glad they managed to escape. 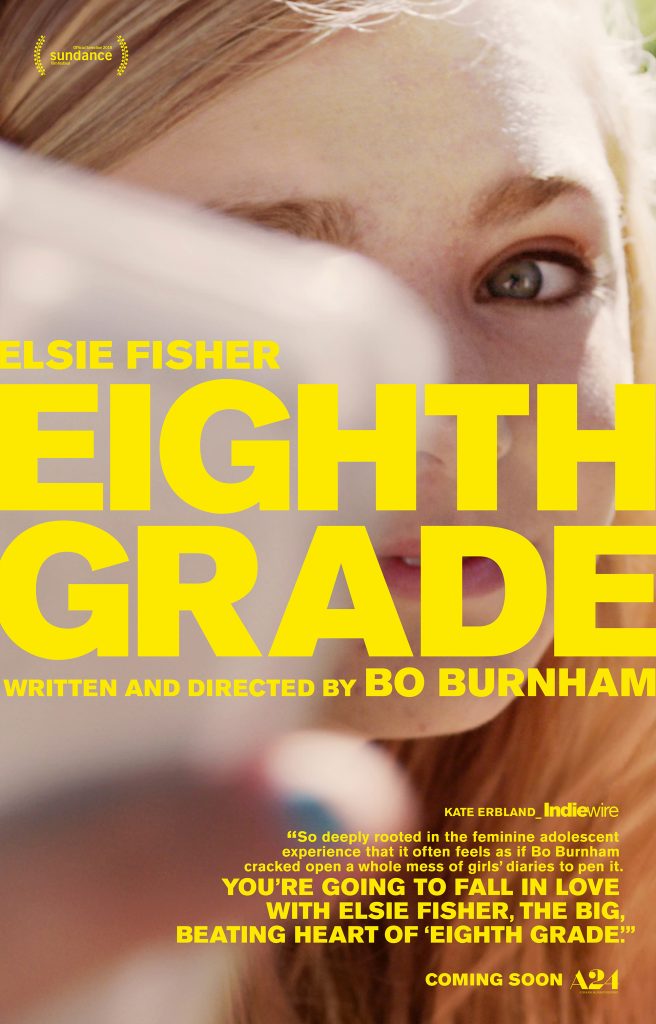 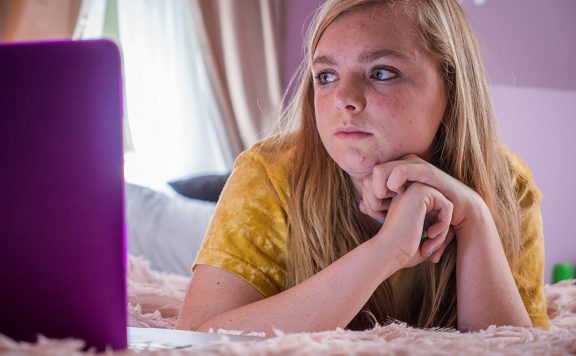 Sundance 2018 Review: Eighth Grade is a One of a Kind Coming-of-Age Masterpiece That Shouldn’t Be Missed.
January 20, 2018