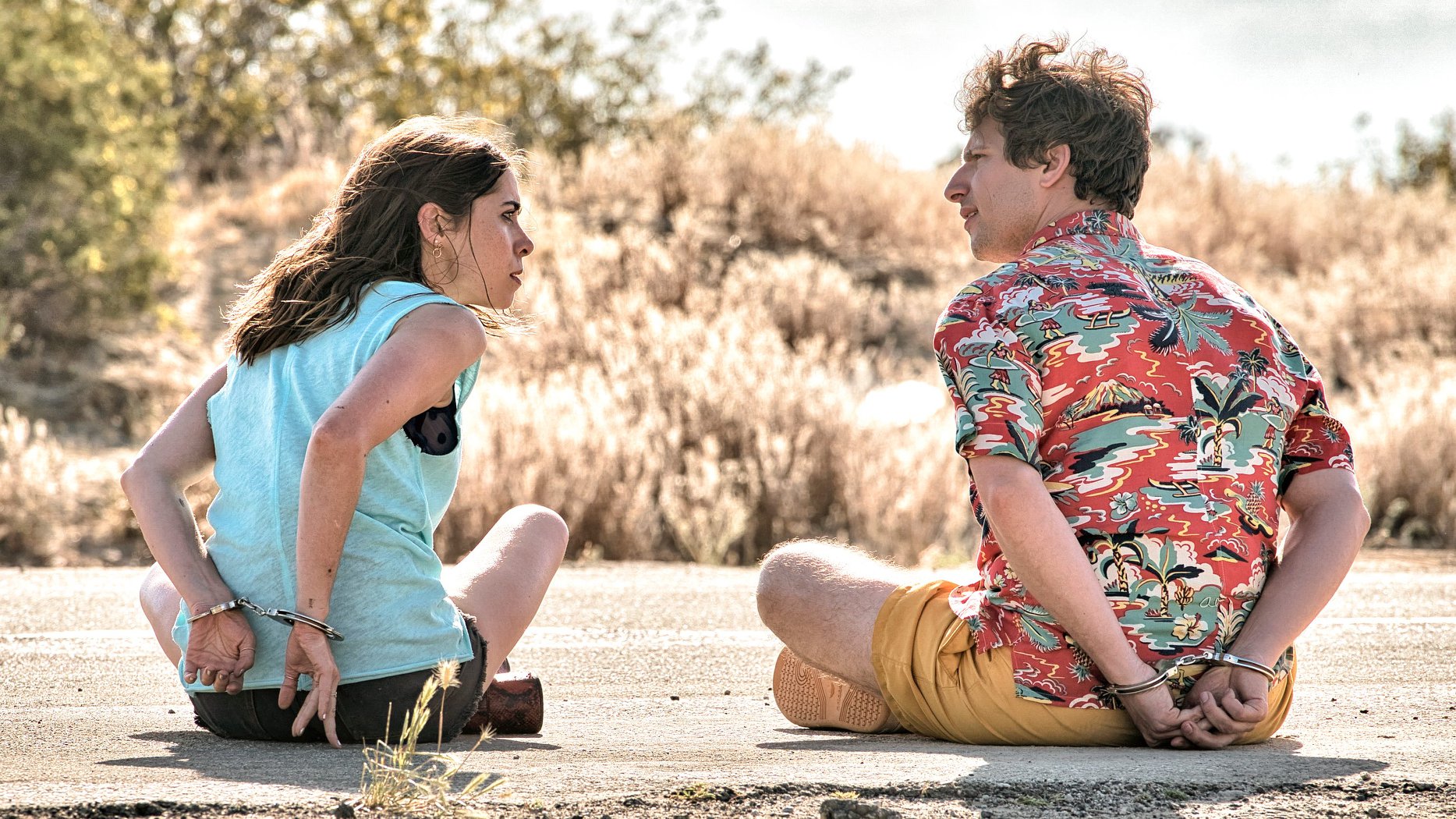 Right off the bat, it is important to note how Palm Springs has a major plot reveal by the end of its first act, and going into the film without knowing much about it could play a role in appreciation. Granted, years, even months from now, Palm Springs will be known as a movie about this specific thing, so does it really matter if I provide a spoiler warning of sorts? That’s the rub, right? Here’s a terrific film that manages to subvert a particular sub-genre, and deliver on being an ambitious romantic comedy. Stars Andy Samberg and Cristin Milioti shine, and there are plenty of laughs within the film’s 90-minute runtime to speak to a return visit. Still, is it necessary for me to go more in-depth on the actual plot of the film? If you plan to keep reading, I’d say so.

Set during the day of a wedding in Palm Springs, Nyles (Samberg) has seemingly had enough of everything. He can barely tolerate his girlfriend, Misty (Meredith Hagner), and does the bare minimum to be present during the ceremony. That said, he also knows his way around the reception, even delivering a great toast, despite not being related to anyone or even that close to the wedding party. This catches the eye of Sarah (Milioti), but as the two begin a courtship, things take a turn, and Nyles ends up crawling into a mysterious cave in the desert. Not the average night, but when Sarah wakes up, she realizes she’s living the same day again.

So, we have another time loop movie, but there’s a new twist in this one. As much as the plot mechanic seems to be more common now, I can appreciate the attempts to push it beyond the typical conceit of fixing it by correcting one’s state of mind. For Palm Springs, you not only have multiple characters all appearing in the same time loop, but at least one character who begins the film having been stuck in it for centuries (and I honestly don’t know if I’m exaggerating or downplaying it). That idea is fresh, funny, and tragic. Fortunately, writer Andy Siara and director Max Barbakow know how to play into all of those emotions. 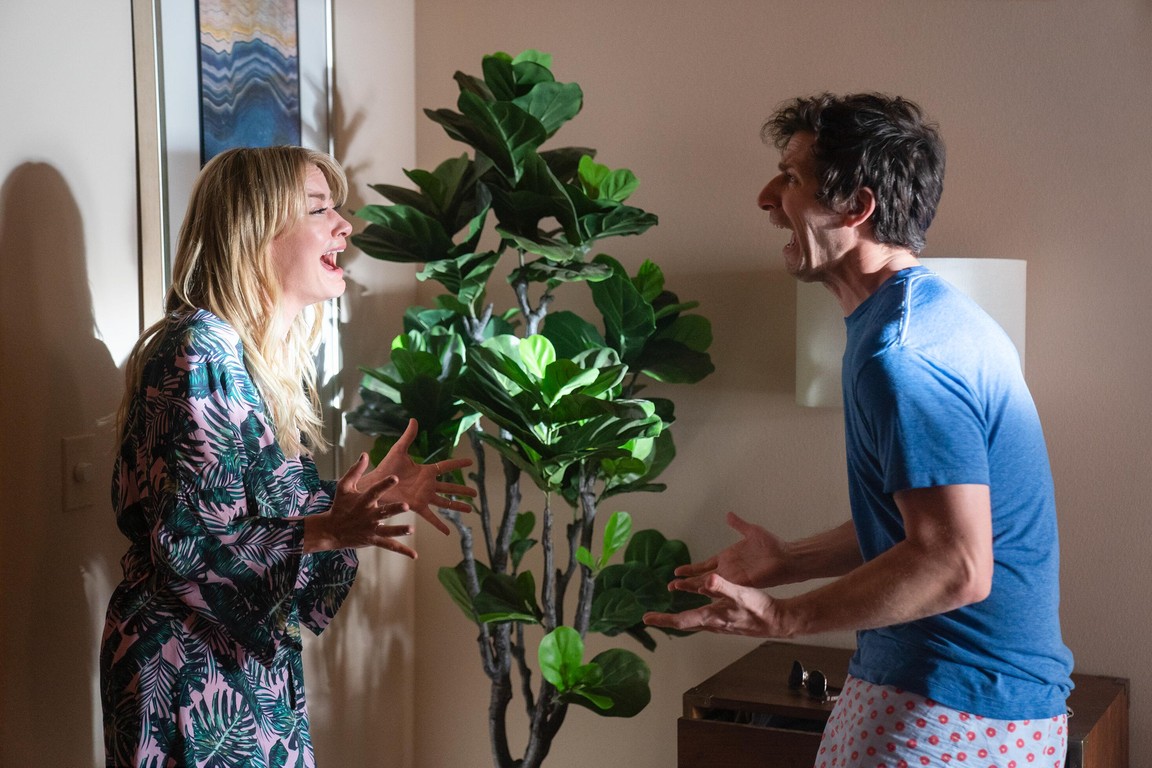 Not unlike Brigsby Bear, another Lonely Island Classics production, there’s a sense of whimsy matched with irreverence and self-awareness that goes along way. Characters can make jokes, yet still leave a window into their feelings right out in the open. Samberg, a performer who knows how to go big, channels the sort of energy that brings out qualities that could otherwise be irritating, yet has a sense of pathos to go along with it all. At the same time, Milioti plays well as a newcomer to this never-ending universe and plays right into the hysteria, as well as self-reflection.

Without going too far into what sort of explanations the film tries to offer, let alone the solution, I will say Palm Springs understands how to establish this setting effectively to keep it enjoyable, and is packed with enough momentum for us to understand there’s some kind of progress happening. That said, the film is not short on glorious montages of wacky things Nyles and Sarah do together, given their predicament. Even cutaways to various times Nyles experimented with some ideas to get through his days allow for some hilarious moments. 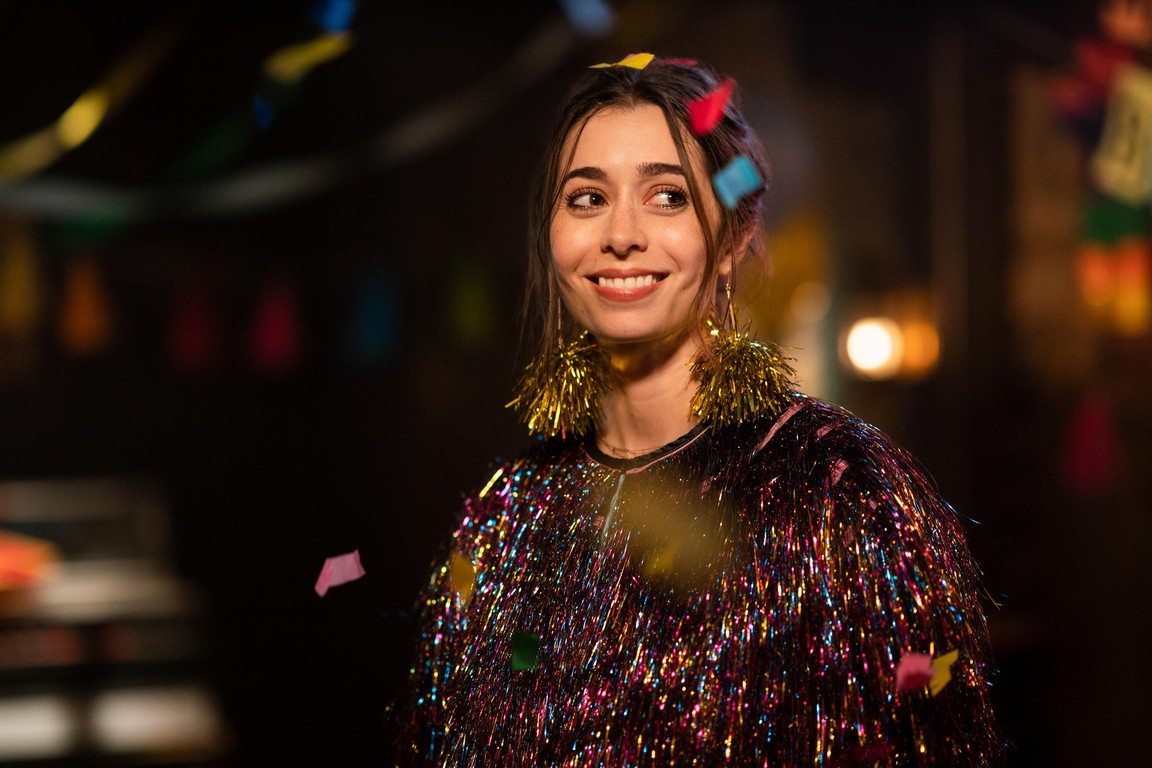 The film is not short on supporting players either. One of the fun things about a time loop film is watching various character actors essentially playing their same brief moments in time over and over, and tracking the nuances that make those interactions different, yet still the same person. For Palm Springs, Peter Gallagher, June Squibb, Dale Dickey, and others, all factor in and do their job accordingly. Gallagher, of course, feels like a naturally authoritative figure, so his placement allows for some inherent comedy from the get-go.

There’s also a role for the great J.K. Simmons, who serves as something of a coyote to Samberg’s roadrunner, but with much deadlier results. That said, you don’t cast Simmons simply to enact some comedic routines. A few moments the two share add some extra introspection allowing the film to open up further on a thoughtful level. 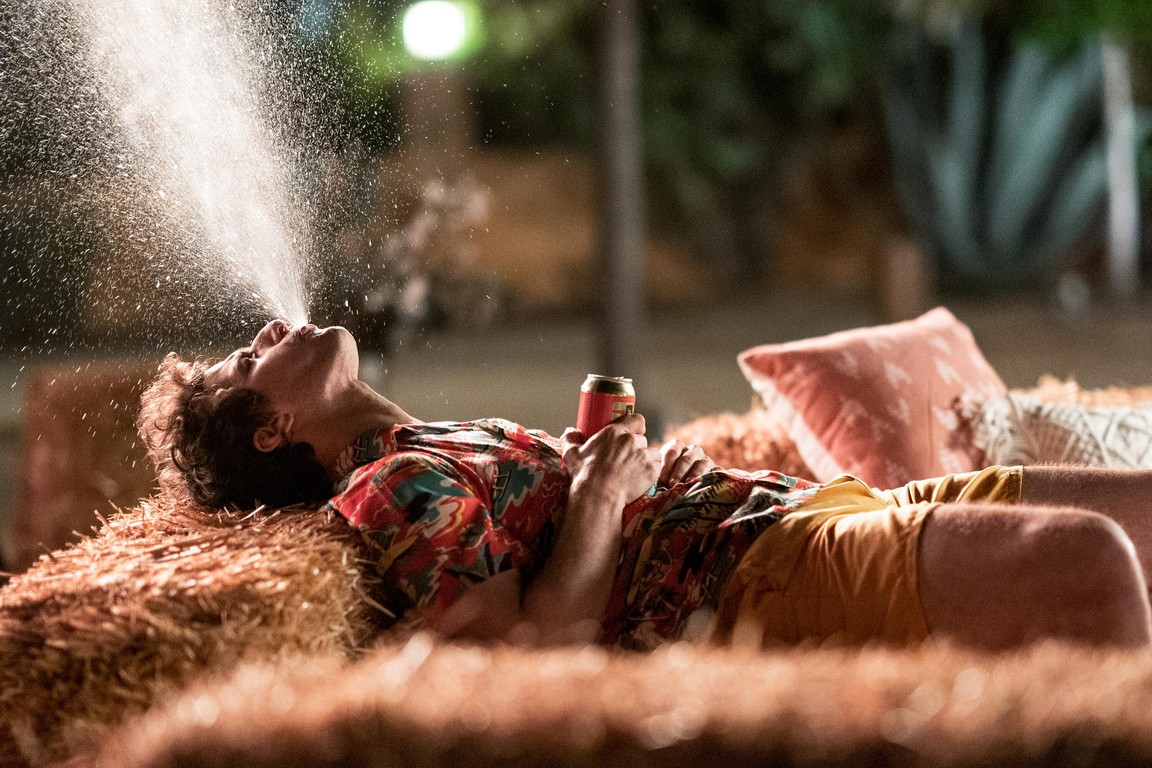 At the end of it all, however, it’s the central relationship between Nyles and Sarah that drives this film. All the right choices are made as far as seeing how they evolve together. Even if one can place the template of a traditional rom-com on top of the steps we see taken, it doesn’t hurt the film, given the effectiveness of the writing and performances. There’s a real understanding of how this genre works, with the time loop element showing off an extra sense of confidence, given what is pulled off to have that element feel so inventive.

There’s a lot to like in Palm Springs. It understands how to handle its characters and premise. The film is consistently funny, yet full of heart and ideas as well. It moves along quickly enough, yet still allows time to consider the scenario and the implications. Taking on a familiar premise such as this, and finding new ways to play with it is impressive. All of this makes the film quite enjoyable and like time well spent, even on repeat. 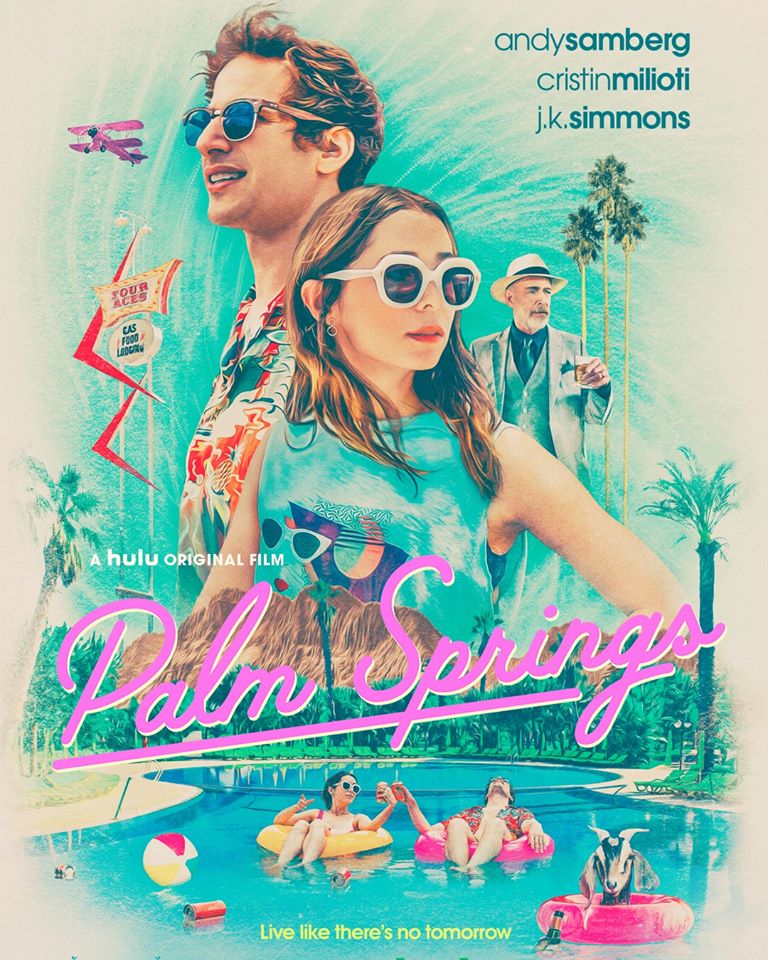 Review: Enjoy The Sunshine And Fun Of ‘Palm Springs’ Over And Over

Right off the bat, it is important to note how Palm Springs has a major plot reveal by the end of its first act, and going into the film without knowing much about it could play a role in appreciation. Granted, years, even months from now...
0
Average User Rating
0 votes
Please sign in to rate.
Cast:Andy Samberg, Cristin Milioti, J.K. Simmons, Peter Gallagher
Director(s):Max Barbakow
Writer(s):Andy Siara
Genre:Comedy, Romantic Comedy
Studio(s):Hulu, Neon
MPAA Rating:R