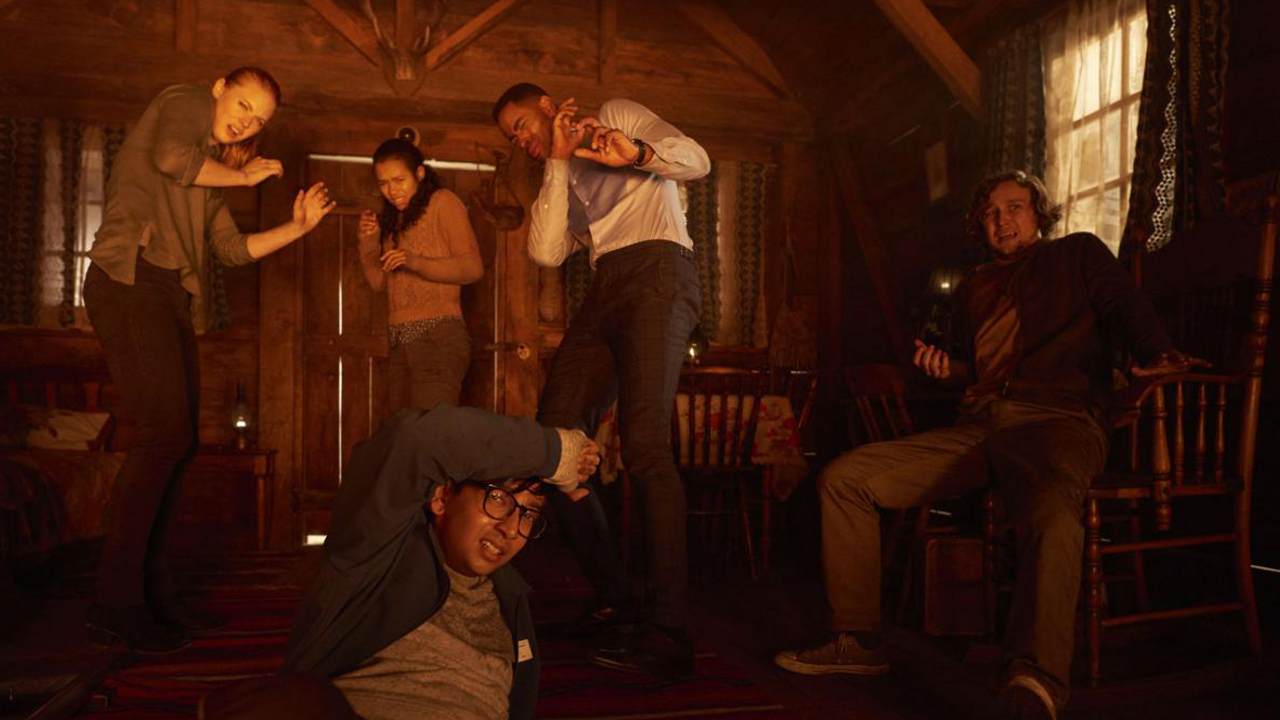 Escape rooms have grown increasingly popular in recent years, putting team-building and puzzle-solving to the test. Yes, you’re locked in a room with friends and under constant pressure to “break out” before time’s up. Regardless, these thematic games are meant as harmless fun. The aptly-titled horror-thriller, Escape Room, treats the interactive brainteaser more along the lines of Saw or 1997’s Cube. That’s about right for the first release of the new year, changing gears from seasonal cheer to a calculated killing game.

Six strangers are invited to the Minos Escape Room Facility, the most immersive escape room out there for a chance to win $10,000. Timid physics student, Zoey (Taylor Russell), antisocial stocker Ben (Logan Miller) and ambitious trader Jason (Jay Ellis) all receive puzzle boxes over Thanksgiving weekend. They’re joined by war veteran Amanda (Deborah Ann Woll), ex-miner Mike (Tyler Labine) and escape room enthusiast Danny (Nik Dodani). While no one’s exactly head over heels about the reward money, they all take up the offer. The game masters at Minos have no intention making the escape room easy or safe for that manner. It’s not just a game of intellect, but more importantly one of survival.

To its credit, Escape Room is allowed to think outside the box with its various scenarios. Whether it be a deceptive waiting room, a cabin in the woods or upside down pool hall, creativity is featured in the forefront. Characters react differently in the unique environments. One character is traumatized from fire and smoke, while another has reservations about an operating table. Director Adam Robitel (Insidious: The Last Key) lays the groundwork for a Saw-esque premise, but opts to play safe in this elaborate house of horrors. Part of that is the PG-13 rating, which rules out any sequences of potential torture porn. We don’t necessarily need to reach that extreme, albeit consequences are greatly watered down. Characters face near-death situations, but there’s never an overwhelming sense of anxiety or tension.

Like most horror-thrillers, the cast of characters is practically disposable. The screenplay by Bragi F. Schut and Maria Melnik tries its hand at providing our ensemble life-altering backstories. But it’s simply not enough to motivate us to invest with these six characters. Despite being framed as the lead protagonist, Russell’s Zoey is more of a bystander than actual player for the first few scenarios. Other characters are hardly up to the task to carry the film. It also doesn’t help matters that the climax of the film dangles at the very start of Escape Room. After 90 or so minutes, we’re going through the motions, waiting to return to that anticlimactic sequence. Escape Room has a firm grasp on developing its complicated traps, yet misses the mark on the overall narrative. For the first 45 minutes, Robitel and company have an adequate plan in motion, but it ends up derailing as more sinister agendas are revealed.

Escape Room is more tiresome than it is engaging as the script hinges on repetition. After witnessing similar scenarios play out time and time again, the wow factor is noticeably absent. Robitel does try to land a few twists and turns in the last ten minutes. But we’re left with greater thoughts of frustration as opposed to satisfaction. Who knows how future scenarios in the Escape Room universe will play out? Or if they even will for that matter. Nevertheless, things are a bit more absurd than fun.

Escape Room derives signature puzzle pieces from Saw, The Hunger Games and The Cabin in the Woods into a weak PG-13 blender. Unfortunately, 2019’s first horror-thriller pays little attention to genre strengths in what’s already a lackluster kickoff to the year.

Review: ‘Escape Room’ Plays in a Dull and Derivative House of Horrors