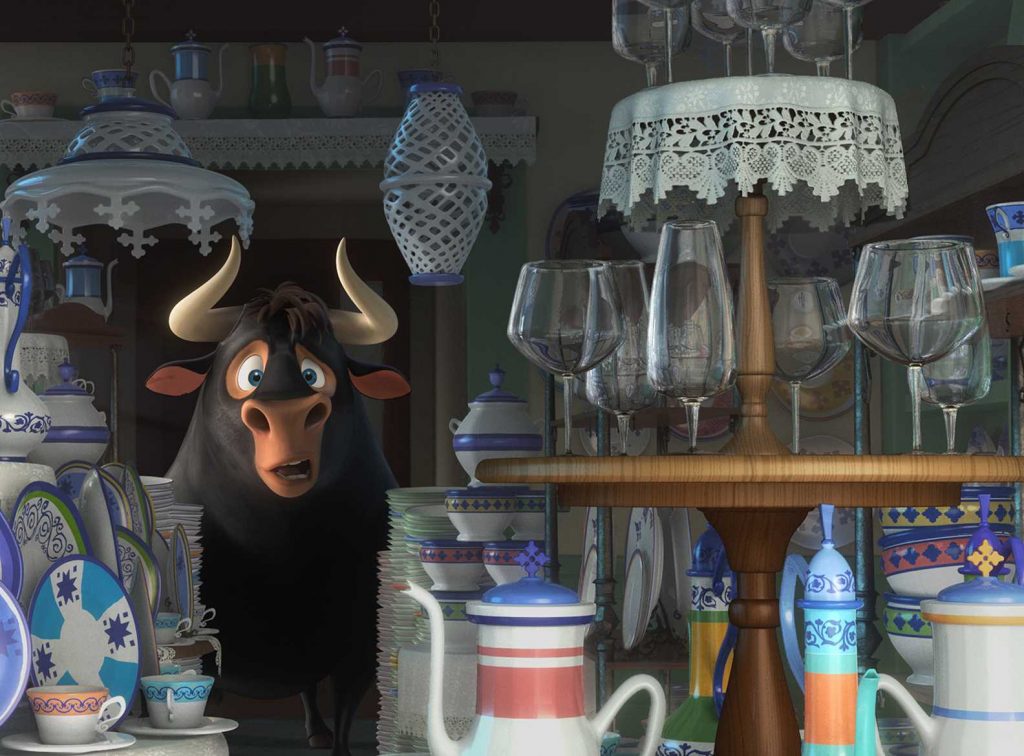 Along with heavy-hitters such as Pixar and DreamWorks Animation, as well as critical favorite Laika, Blue Sky Studios has been putting out major animated films at a steady pace. Ferdinand finds the studio in familiar territory, though I wished it strived to be a bit more different. This story of a pacifist bull based on an old children’s book had potential to be something of a sweet outlier, compared to the likes of the Ice Age and Rio films, but it can’t resist the urge to add in lots of pop culture elements. Still, the film has its share of fun and features a good amount of heart thanks to some nice touches.

An extended prologue introduces us to Ferdinand the bull as a young calf who enjoys smelling flowers. His father (voiced by Jeremy Sisto), along with the other bulls, are all Spanish Fighting Bulls who take pride in going to the arena and facing the matadors. Due to some new circumstances and Ferdinand not wanting any part of this, he runs away and ends up growing up on a farm. As an adult, Ferdinand (now voiced by John Cena) still enjoys a peaceful life where he can smell flowers, but he is eventually captured and brought back to the bull training grounds he escaped from. While much bigger than the other bulls, he’ll need to figure out a way to get out of his predicament, as he has no desire to fight.

I find Cena to be an interesting star. He’s not quite at the level of Dwayne Johnson, but by most accounts, he’s a terrific wrestler, charismatic enough, and the sort of person whose philanthropic ventures could pretty much shut down anyone looking to challenge him. As his first major theatrical animated feature, it’s not too much of a surprise to hear a level of joy in his voice as far as portraying a bull that practices non-violence. He’s not playing an edgy character or even one with a dry, sarcastic wit. He’s a heroic character who escapes being bland thanks to how his size makes him somewhat clumsy, despite his well-intentioned efforts. 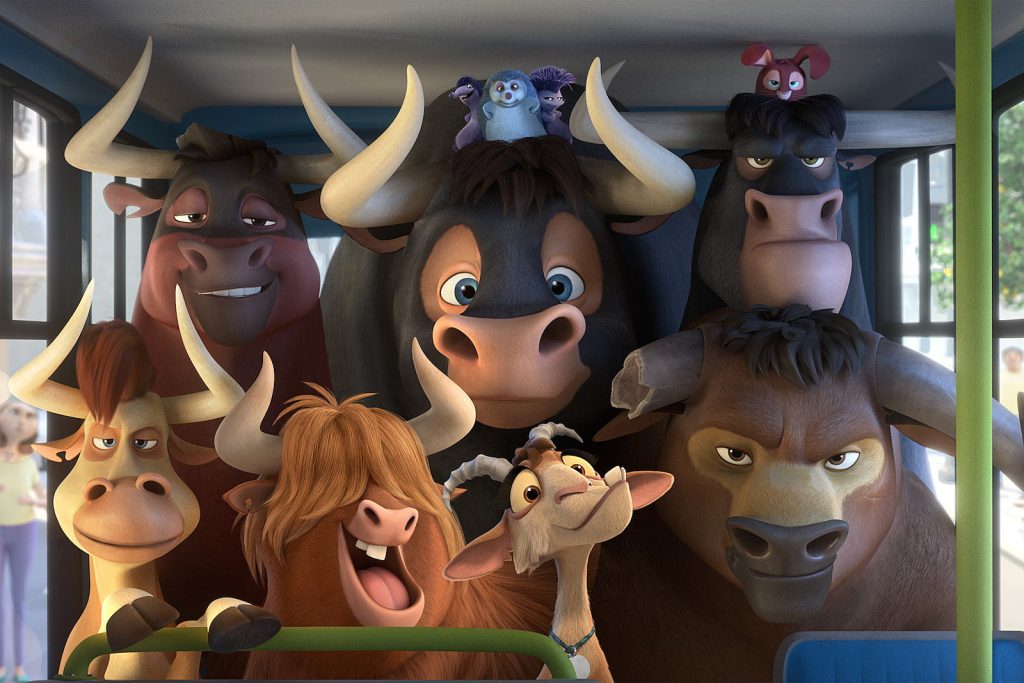 However, because of this and because the story doesn’t have too many layers to it, the film ends up with a few too many lulls. This is the longest film yet from Blue Sky (106 minutes), and since Ferdinand isn’t spouting off constant one-liners, his innocence only takes one so far when not verbally sparring with the supporting cast. That said, the supporting characters can be funny, but it feels like there are too many of them.

Kate McKinnon is the Dory to Cena’s Marlin, as she has a loopy personality as an old goat who’s around to calm down the bulls. The other bulls feature the voices of David Tennant, Anthony Anderson, Peyton Manning, Tim Nordquist and Bobby Cannavale, who is also the primary foe of sorts for Ferdinand. In addition to the bulls, there are also three dancing horses (Flula Borg, Boris Kodjoe and Sally Phillips), a trio of mischievous hedgehogs (Gina Rodriguez, Daveed Diggs and Gabriel Iglesias), and a shaggy dog named Paco (Jerrod Carmichael). That’s a lot for a film to handle, and Ferdinand doesn’t quite get how to utilize best what it has.

Given how this film is another that must expand on a fairly short children’s book, I get the need to boost the number of characters involved and other developments, but it ends up feeling like overkill. It’s a shame because the story surprisingly takes story beats from both Finding Nemo and Gladiator (of all things) but then puts a lot of pop culture-related gags into the film as well. One can take the plot developments somewhat seriously, but tightening up the film and cutting down some of the characters would have helped sell the urgency and keep interest from wavering. 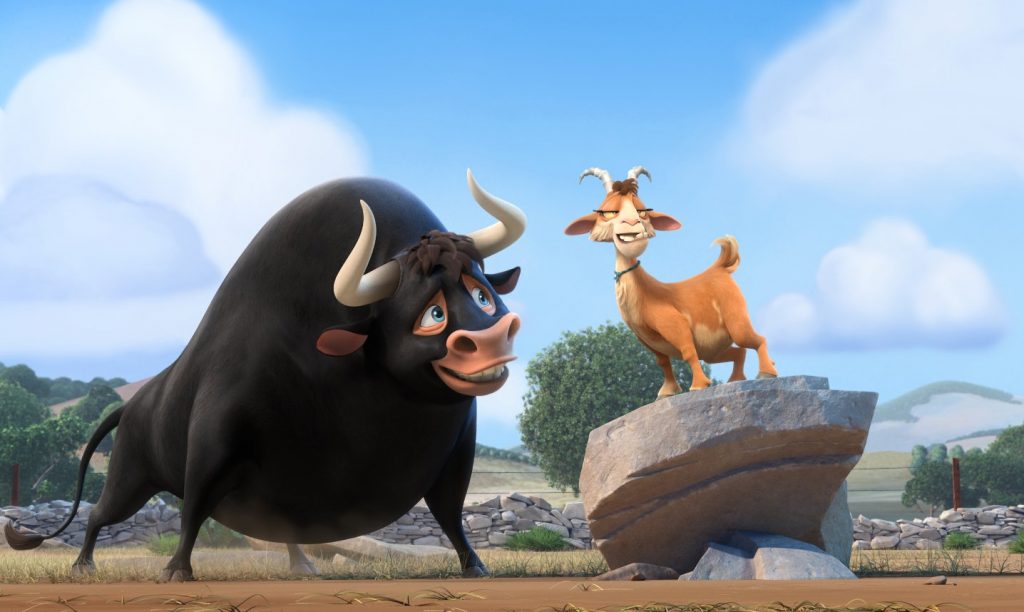 Fortunately, there is sweetness to the film that keeps it entertaining. The visual of an oversized bull sneaking around cities and through houses is fun. Not all of the jokes work, but it is reasonably humorous throughout. And there’s a final stretch involving a chase that is amusing enough to take in. Even on an animation level, Blue Sky continues to opt for a more cartoonish look, but it fits for the story being told while leaning in on the abilities a bull would have.

Ferdinand has now from a very popular children’s story to an acceptable animated feature. I’m sure director Carlos Saldanha is pleased with what he was able to bring, as the goal must have been to make a film in the spirit of that book, which Ferdinand does seem to uphold. I wish the film was a bit leaner and made a few more ambitious choices, but it satisfies and continues to show off the talent and charm of Cena in his varied filmography. 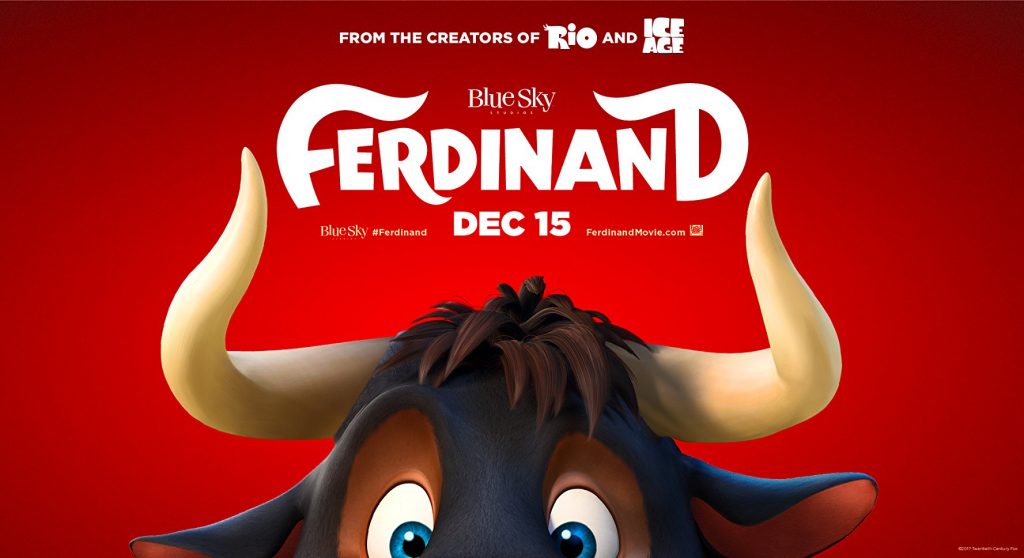