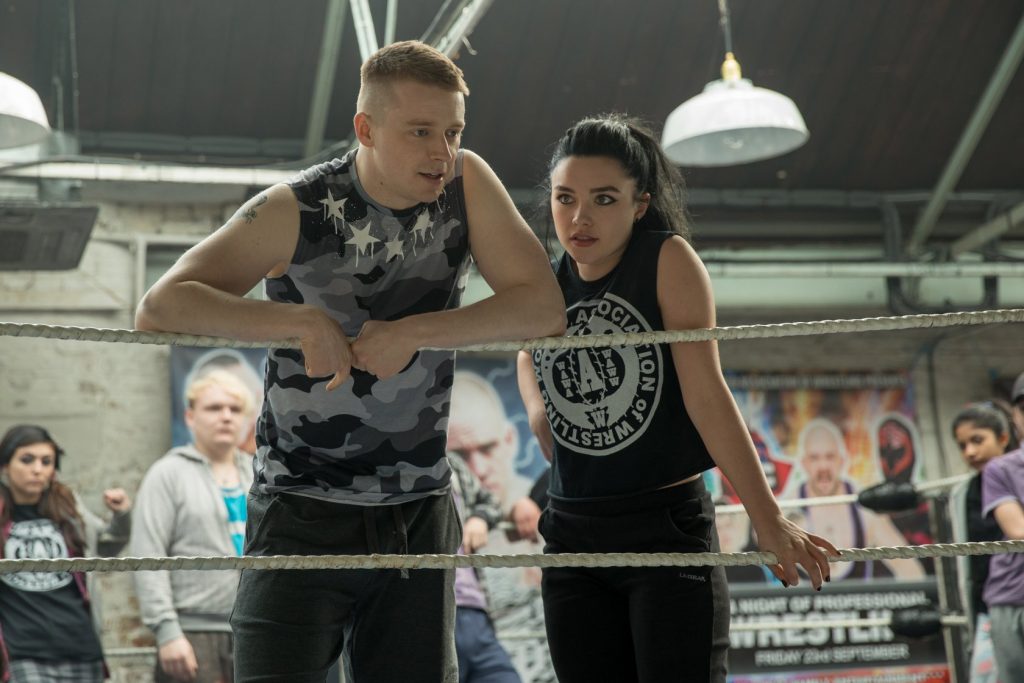 There doesn’t seem to be a deep well to swim in when it comes to sports comedy-dramas. This doesn’t make those films any less effective, but it does help separate the strong from the weak. Fighting with My Family presents a dramatized version of Saraya “Paige” Bevis’ story in becoming a professional wrestler for the WWE. It follows many expected beats of this kind of film. And yet, there’s a lot of heart in how it chooses to tell its story with just enough wit to keep the feel-good qualities from becoming too saccharine.

Florence Pugh stars as Saraya, a young woman who comes from a family of wrestlers. She shares a dream with her brother Zak “Zodiac” Bevis (Jack Lowden) to become true professionals, while her parents, Patrick “Rowdy Ricky Knight” Bevis (Nick Frost) and Julia “Sweet Saraya” Bevis (Lena Headey), do what they can to keep up their careers as wrestlers in the small town of Norwich, England. When try-outs are held for the WWE, the plot thickens as only Saraya ends up being chosen to sign on. Even then, however, it’s not a simple walk in the park for Saraya to work well in the big leagues.

It’s strange how certain films need qualifiers. For a movie like this, I’ve seen plenty of reviews from authors (based on its Sundance Film Festival premiere) that make sure to note how they’ve never watched wrestling, but they were happy to go along for this ride, and still understand what was going on. I haven’t watched wrestling since I was a child, but I’ve also never been a bobsledder, a rock and roll star, or a political leader, and there are plenty of those films (the latter especially), where no one seems to feel the need to make sure to explain how they don’t know all the ins and outs. 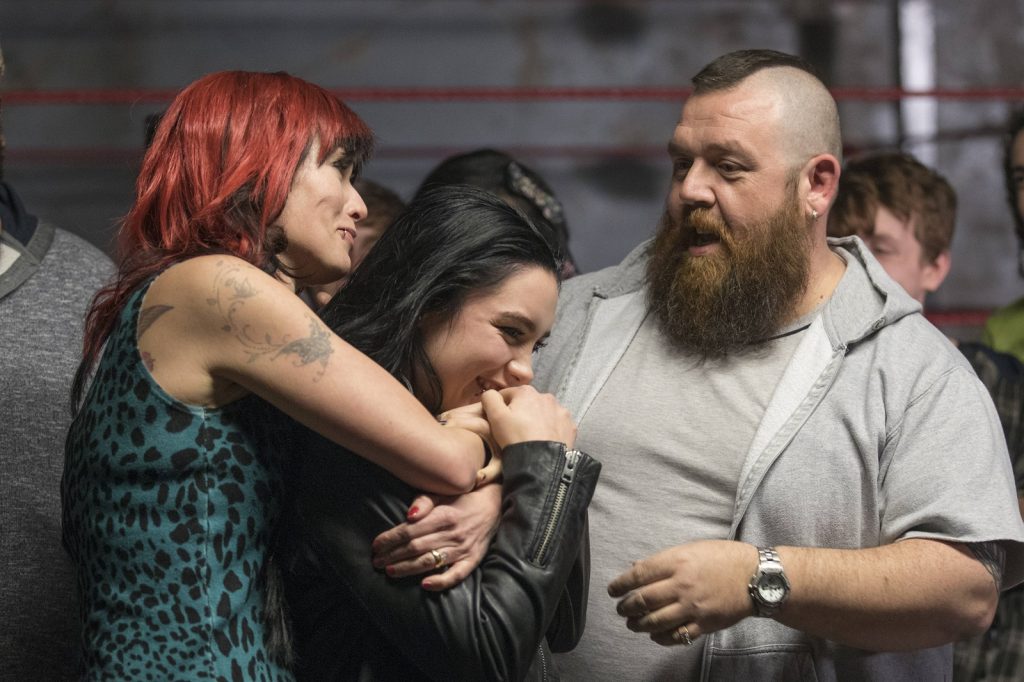 The fact is, Fighting with My Family isn’t going out of its way to make the concept of wrestling too abstract for the uninitiated. If anything, I’d be more concerned about how things have been simplified for those that very much follow wrestling, but that’s not the point either. I couldn’t tell you if writer/director Stephen Merchant is a massive wrestling fan who’s always wanted to tell a story like this, but it is easy to look at what he responded to in relating this story to an audience.

Regardless of the sport, this is the story of an outsider coming from a family of outsiders who all love each other dearly. They support one another, have moved away from difficult times thanks to a sport they love, and even help their community by teaching and performing it. It’s essentially a story about individuals from the wrong side of the tracks getting wrapped up in a standard underdog sports movie. It’s Bad News Bevis.

It works because it plays like a character study with some inherent stakes, like many of the better sports movies out there. Whether or not there’s a big game on the line, films like these are called “feel-good” movies because you care about the athletes involved thanks to what we’ve seen in their personal journey and connections. It also helps to see a film taking on this story in such an entertaining manner.

The first third is devoted to the Bevis family in England, and it’s a lot of fun to see that dynamic unfold. Frost and Headey are great as the heads of the family, adding plenty of humor to help balance the somewhat violent nature of wrestling as a way to highlight how it basically works as an intense stage play. The rest of the film focuses on Saraya’s journey to understanding what she has signed up for and how she can succeed.

As this is the story based on a real wrestler who is still in the game, it may not feel all that compelling to watch a story build to some make or break points, given the inevitable outcome. However, it is about that journey and what has been done to make you care, regardless of knowing some form of where things are headed. This is why Fighting with My Family shines as a character-focused feature.

Pugh does solid work as Saraya, a person who feels excitement and guilt about getting a chance to be big, but without her brother by her side. Expressing that emotionally, along with the physical challenges that come her way play well in having us understand and want to root for her. That journey also allows Vince Vaughn to show up as a coach, nailing all the right beats to be funny as well as mentorlike. Lowden gets a chance to shine as well, playing up the insecurities of being left at home, rather than chosen to be a star. I can’t say Dwayne “The Rock” Johnson’s cameo has a similar level of depth, but he’s a good sport in how he plays up himself here (he’s also an executive producer on the film).

Fighting with My Family is a very likable movie. It goes far enough in having us understand what we need to know about the function of wrestling in the lives of these characters, but there’s more to enjoy in what we learn about them as people. It’s also smart enough to portray them as eccentric folk who don’t need excuses made for how they act. The film wants to celebrate this family for how their choices have kept them on the right path, regardless of how unconventional it may be. It adds up to a sweet-natured film about a rough and tumble experience. 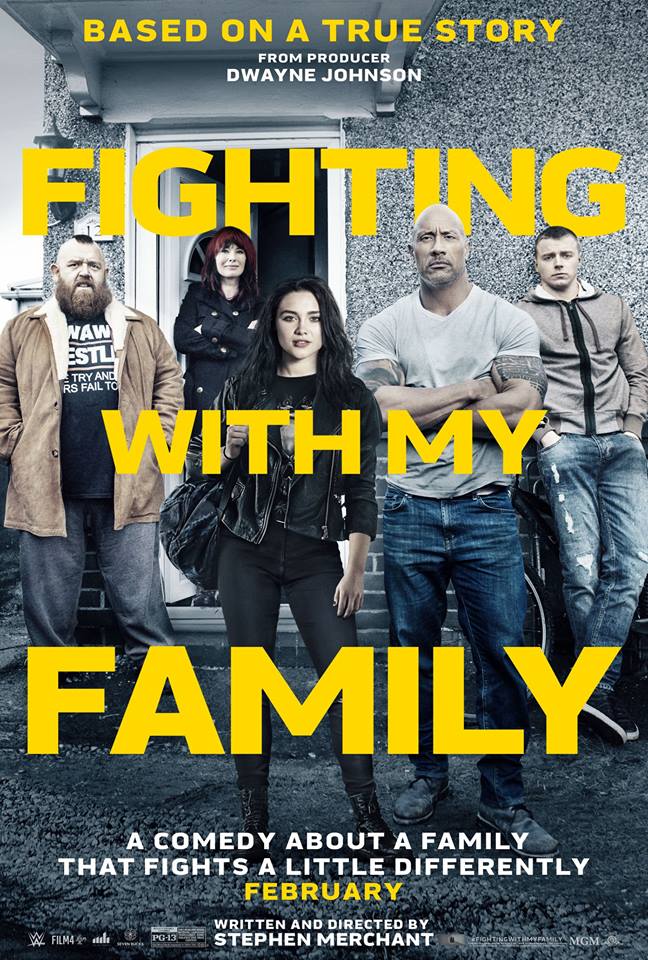