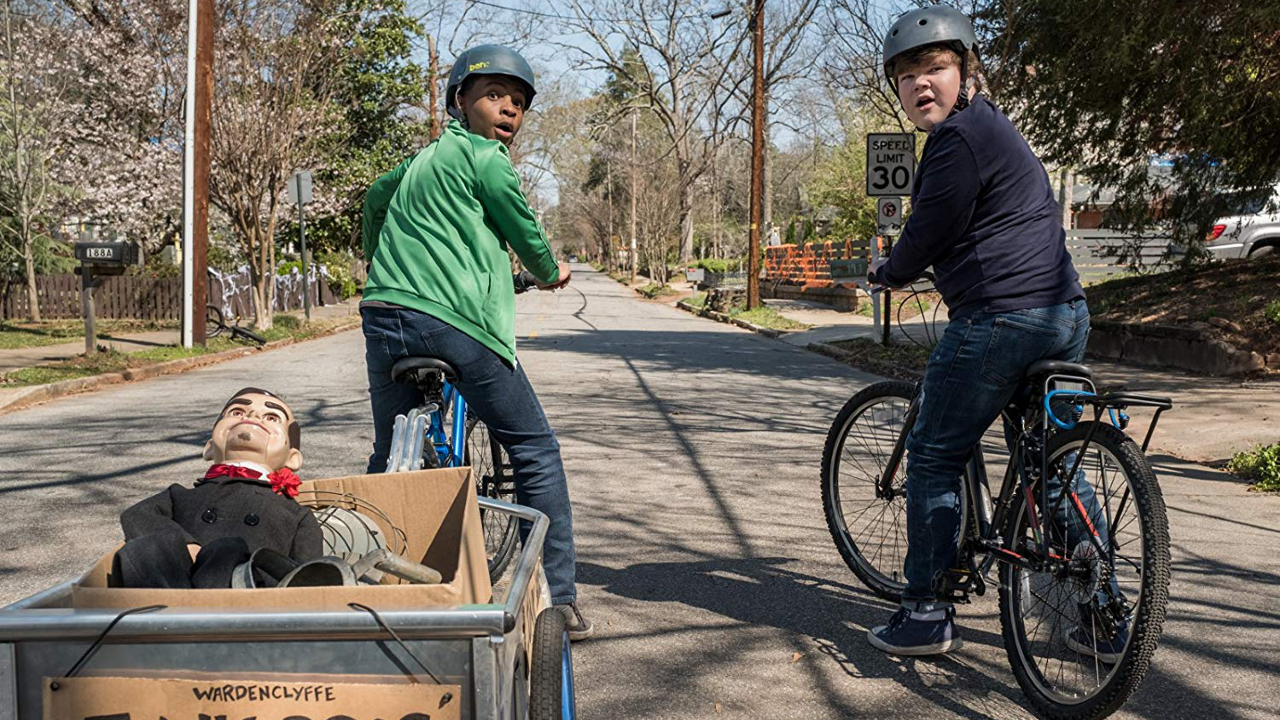 For any kid growing up in the 90’s, R.L. Stine’s “Goosebumps” books were a reading staple – fun, fast-paced page-turners. Three years ago, Sony brought the franchise back to life with its first feature film, paying homage to the series’ greatest hits. Even with its silliness and harmless nature befitting a simpler era, Goosebumps resonated with current younger audiences.

Goosebumps 2: Haunted Halloween offers a second helping of fright and fun, albeit limiting its ties to the 2015 hit film. A few years have passed since the event of the first film. The narrative’s shifted from Delaware to Wardenclyffe, New York. Coincidentally enough, Wardenclyffe is Stine’s old stomping grounds, where he left behind an abandoned house in the midst of the quiet town. Local kids, Sonny (Jeremy Ray Taylor, It) and Sam (Caleel Harris, Castle Rock) stumble across the home during a junk-hauling job. The two end up obtaining Stine’s unfinished first manuscript, “Haunted Halloween” as well as the menacing ventriloquist dummy, Slappy (voiced by Jack Black). Haunted Halloween is an awfully cliché title. But considering Stine’s film counterpart wrote it as an inexperienced teenager, here’s a tiny pass.

Haunted Halloween stays true to Goosebumps formula as the ventriloquist dummy unleashes terror upon the town. Halloween night  becomes an utter nightmare as an army of balloon spiders, killer Gummy Bears and a few of Stine’s signature monsters perform Slappy’s bidding. Stine (Jack Black) has become a recluse since the first film. That leaves Sonny, Sam and Sonny’s older sister Sarah (Madison Iseman, Jumanji: Welcome to the Jungle) as the only ones who can save Wardenclyffe from this terrible fate.

Even with a creative overhaul, the new minds behind the Goosebumps sequel treat Haunted Halloween like an big-budget episode of the 1995-1998 TV series. Director Ari Sandel (The DUFF) and writers Rob Lieber and Darren Lemke have no reason to apologize for the cheesiness and silliness taking center stage. Goosebumps isn’t out to break the mold of family fare, but it drops moments here and there to be a fun Halloween treat for a breezy 90 minutes.

While the first film brought back series baddies such as the Abominable Snowman of Pasadena, the Werewolf of Fever Swamp or the evil lawn gnomes, this Goosebumps sequel doesn’t make the effort to bring in more fan favorites. Instead, Slappy remains the focus of the franchise, cackling and quipping non-stop as the little wooden foil for the kids. Like a good portion of the sequel, that decision is a safe retread, standing in the shadow of a more inviting first chapter. Unfortunately, there is also little attention spent on the visuals here. Though consistent with first Goosebumps, there is a direct-to-video shriek that could be avoided. Slappy’s probably the rare exception here.

At least everyone’s still having enough fun with Goosebumps 2: Haunted Halloween. The three kid leads are cliché creations right out of any of the original 62 books. Even going head-to-head with overdone characterizations and conflicts, there’s a slight improvement over some of the episodic adaptations. Though, the creep factor tends to lack in exchange for a slew of family-friendly jokes. Lieber’s screenplay also drives home a fully self-aware product, capitalizing on everything from Ken Jeong’s holiday zaniness to direct shots at a certain Stephen King novel.

Goosebumps 2: Haunted Halloween comes at the ideal time to get those youngsters all prepped for Halloween. Constantly juggling between fun and formulaic, it’s almost enough to warrant another tween fright-fest with Black and company.

Review: ‘Goosebumps 2’ Treats with a Sweet Bag of Nostalgia in Silly Sequel