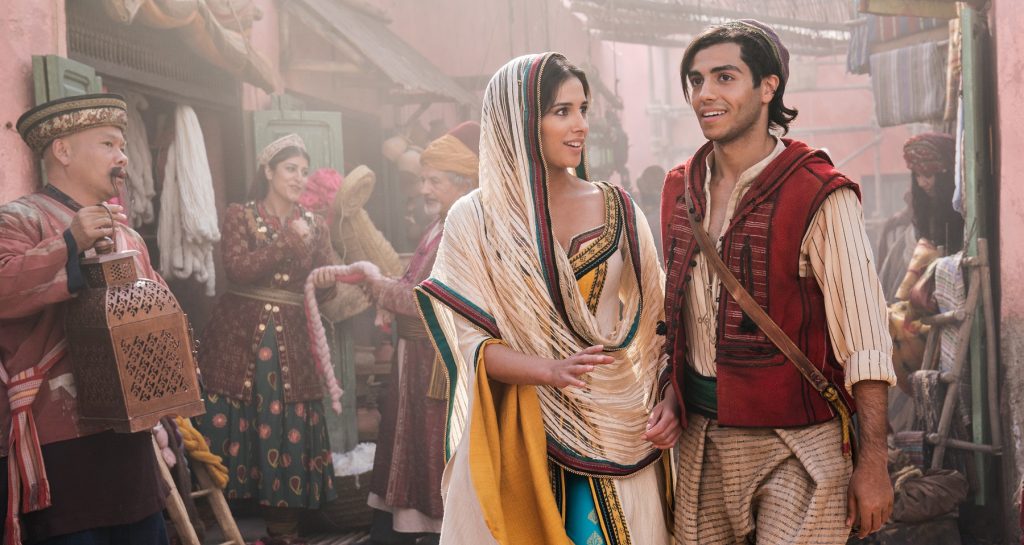 Since one must now accept Disney’s choice to remake their animated features on at least an annual level, the best I can do from the outset is gage my interest in the possible outcome, based on these announcements. Hearing news of Guy Ritchie directing a live-action Aladdin had me the most curious between the four arriving in 2019 (Dumbo was forgettable, the upcoming Lion King shows some promise, and Maleficent is back for some reason). Would there be any trace of the high-octane director to be found in a musical fantasy adventure? And what about the visualization of a realistic genie? Now having these answers, I can say it played out in an acceptable enough way. The movie is too long, and some of the musical sequences come up lacking, but the cast is strong, the production feels big, and magic carpets are always cool.

The film features Mena Massoud as Aladdin, the street thief with a heart of gold. Massoud is a lot of fun here. He has chemistry with everyone and manages to bring enough charm to make up for a messy first act that rushes through character beats and provides the first example of Ritchie’s lack of understanding of how to make a strong musical sequence. With all the criticisms Disney faced during the production of this movie, let alone some lackluster trailers that undersold the work of the actors involved outside of its most notable star, it is a significant relief that Massoud works as well as he does as Aladdin.

As those familiar with the animated version know, Aladdin meets Princess Jasmine (Naomi Scott) and falls for her. Not being a prince, he can’t make this relationship work, but Jafar (Marwan Kenzari), Grand Vizier of Agrabah and the Sultan’s chief advisor, makes Aladdin an offer. If Aladdin can retrieve a lamp from the mysterious Cave of Wonders, he will be rewarded accordingly. Things don’t go quite as planned, as Aladdin ends up being the one in control of the lamp, which introduces Will Smith as the Genie. 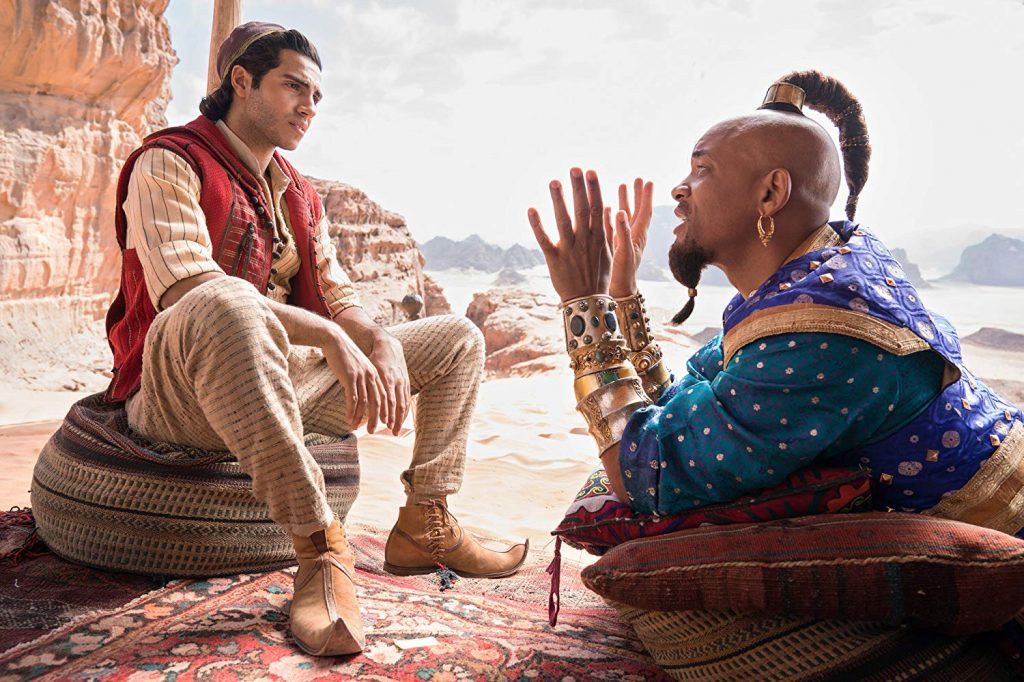 Much has been said about the tricky prospect of recasting the iconic Robin Williams performance for a new film (never mind all of the various stage adaptations that have been plenty successful without Williams). With this film, I can say Will Smith does exactly what’s needed to make the part his own, as well as be put under enough control not to hijack the film. Smith brings the charisma one expects from the all-powerful and very eccentric character, and even shares a few of the film’s funniest moments with Aladdin (notably a scene where he is introduced to the Sultan).

The visual effects to make the Genie work are also worth mentioning. Since the animated film is presenting a blue cloud with a face, there’s a lot of room to play with what that could look like in live-action. Thanks to motion capture work and visual effects from Industrial Light & Magic, audiences get a creation that takes a minute to get used to, but overall works. This becomes evident in the “Friend Like Me” song and dance number, which is perhaps the best-handled song in the film. Once Smith gets a chance to blend in and look more human, the film becomes even more of a showcase for the production and costume design.

Unlike some of the other Disney remakes (Beauty and the Beast in particular), Aladdin looks lavish and big. The outdoor atmosphere, various landscapes, and culturally appropriate choices add up to something that would be less dreary than a gloomy castle anyway, though the lack of creepy furniture and silverware come-to-life certainly helps as well. Aside from the “Prince Ali” musical number which shows a real lack of energy despite the numerous extras and other extravagances, the film is never at a loss in making Agrabah come to life, whether in the palace or on the streets. 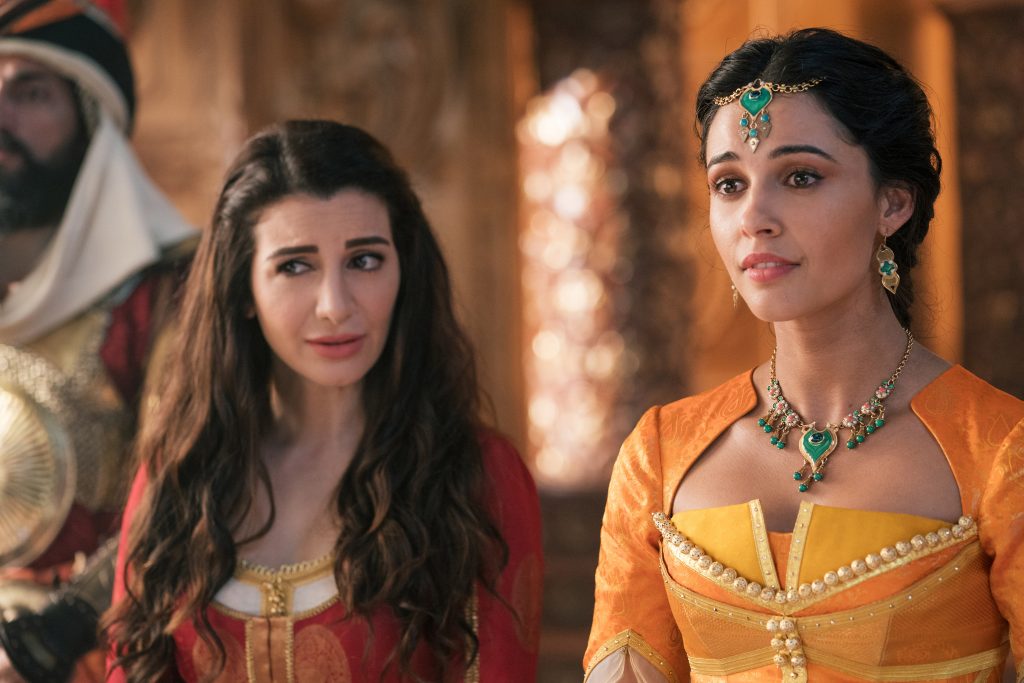 When it comes to the others who populate this area, the film also has its highlights. With Massoud on one end, you also have Naomi Scott’s Jasmin on the other, and she mostly makes the role work. She’s best when interacting with Massoud or her handmaiden (Nasim Pedrad), as these scenes allow the film to relax and let the actors more naturally banter with one another. Not as compelling is how the film chooses to improve upon Jasmin as a character, adding a weak power ballad (twice) to highlight her empowerment. If anything, without any follow-through on her proposals were she to become Sultan, Jasmine comes off as less empowered than in the original movie.

Meanwhile, even with 30 extra minutes compared to 90-minute original, Jafar still doesn’t get a great villain song to round him out. Kenzari is fine in the part though. He gets a bit more of a backstory, and feels like a younger (and less intimidating) take on the character, but is stopped short of genuinely going for it. Yes, we get a couple of “Jafar does a maniacal laugh into the sky” moments, but an over-the-top song and dance would have better-rounded things out.

Honestly, with these remakes, particularly with the ones that came out of the Disney Renaissance period, much of the success depends on how much a viewer will accept the mix of nostalgic love for the original with the choices made for the sake of a new adaptation. Aladdin hits all of the same beats in a relatively faithful way, down to some offhand asides from supporting cast members and singers. It’s when the film strives to add more that it runs into problems. 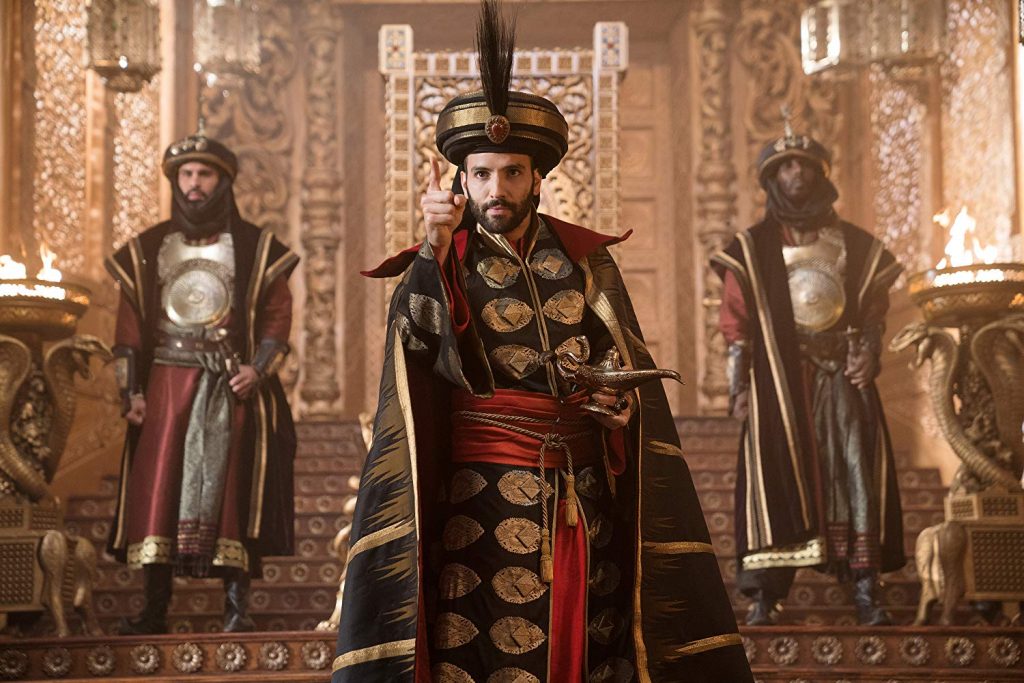 Some of these choices are acceptable. Having Genie and Jasmine’s handmaiden, Dalia, become a romantic pairing allows for some extra scenes to build on the Genie character and add some extra comedy. Once the film settles down, Massoud and Scott have a few additional scenes that better round out the romance aspect of the film. But the rest of the excess feels like just that. If it’s a studio requirement to maximize these films for its audience, it comes at the cost of revealing how great the animated movies were for trimming all the fat to work as 80 or so minute films (without credits). This is especially ironic for Ritchie, the director who was prided for his early film Snatch thanks to cutting everything that did not involve the plot or comedy.

And that’s where the most significant divide comes with these films. How will history look at Aladdin and these other remakes? With so little definable qualities as far as the specific artists involved, is there anything these films add, aside from an excuse to get an audience to revisit this story in a new medium? It’s likely not the concern to most, but when this film makes all the money it’s bound to make, just hope it helped build towards giving other creators a chance to create something original.

For what it is, Aladdin is fine. The movie is never less than entertaining, Smith and Massoud are solid highlights in a well-cast film, and the production looks like its budget (pushing near $200 million). There’s not much under the surface beyond obvious rallying cries towards topical issues, but that’s not necessarily needed either. The film doesn’t bring viewers to a whole new world, but its still one or two jumps ahead of some of the other Disney remakes.

[Final Note: I have missed getting Will Smith songs at the end of movies, so the film did provide a nice return with that.] 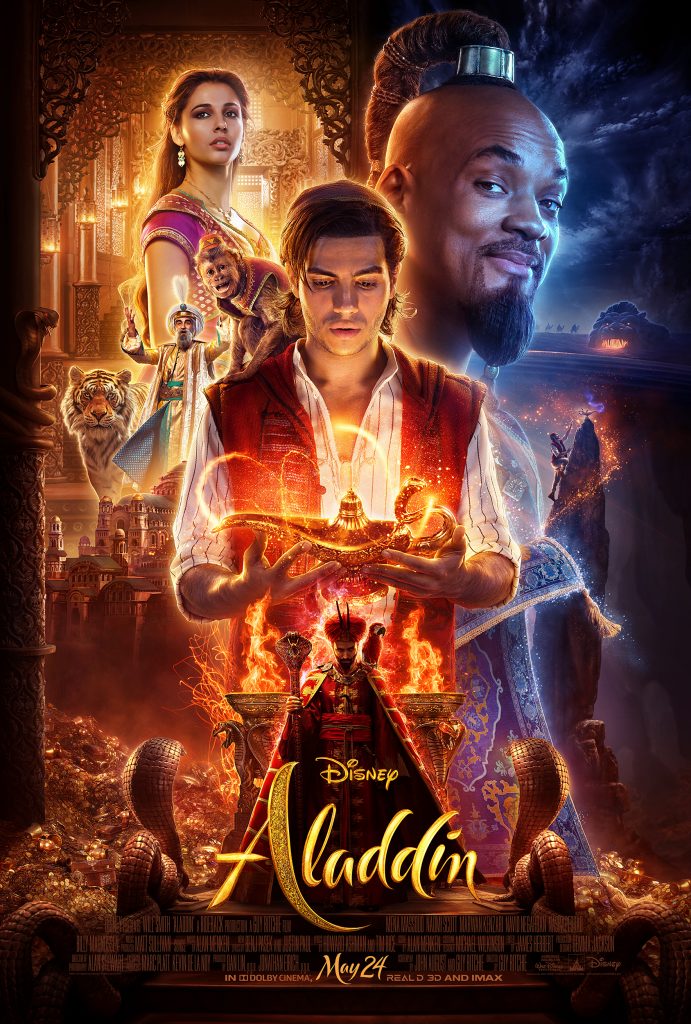 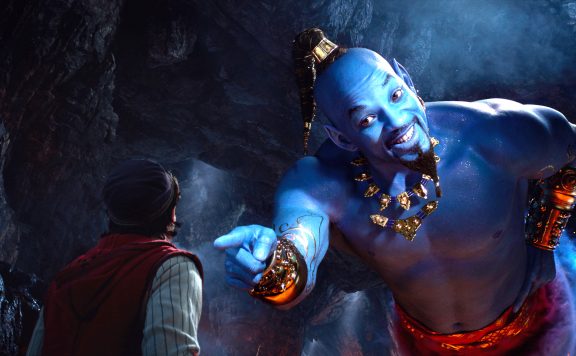 Aladdin Review: One of the Best Disney Live Action Remakes Yet
May 23, 2019