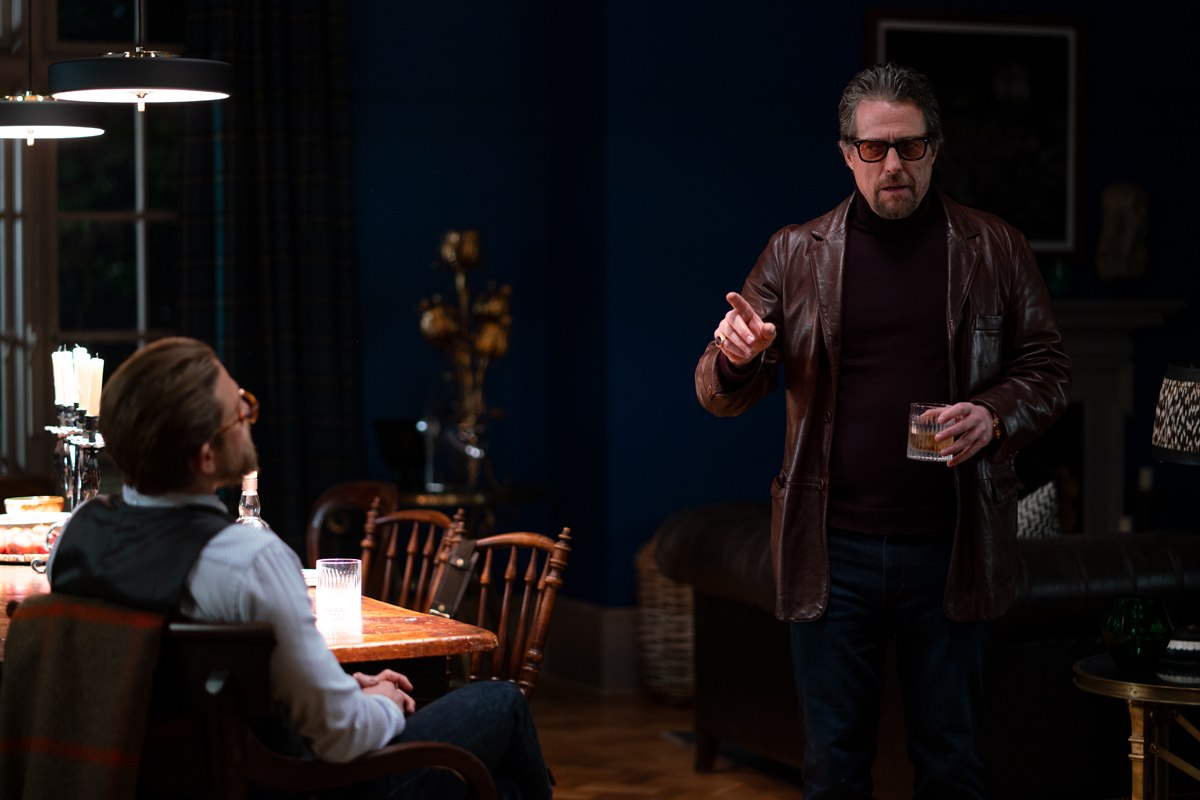 While director Guy Ritchie may be currently off somewhere counting a Cave on Wonders-sized fortune following his efforts on the live-action Aladdin that turned it into a billion-dollar hit, he did find time to do something in the “one for me” realm as well. The Gentlemen was designed to function as a throwback to the kinds of films Ritchie began with, Lock, Stock, and Two Smoking Barrels and Snatch. It more or less does play similarly, though Ritchie has evolved as a filmmaker in the past two decades, and his style does allow for new ways to explore the world of British criminal activity. As a result, here’s a film with a healthy dose of meta self-awareness to go along with the occasionally humorous lens Ritchie views his gangsters through.

A lot of the film revolves around storytelling. Hugh Grant stars as Fletcher, a private investigator who begins the movie by breaking into the house of Raymond (Charlie Hunnam), the right hand to the successful cannabis baron Mickey Pearson (Matthew McConaughey). Fletcher wants to tell Raymond a story surrounding Mickey’s success and his involvement in the world of criminal activities, which extends to supporting characters such as Jeremy Strong’s American billionaire character, Matthew Berger, and Chinese underboss Dry Eye (Henry Golding). As Fletcher lays out his story, complete with asides and other touches to call to mind the structure of an actual screenplay, various twists take place to call into question just how accurate this story is, let alone if it has already reached its conclusion.

While cockney slang, speech-related semantics, and violence have always been a staple of Ritchie’s crime flicks, he has enjoyed playing with time and linear storytelling in nearly all of his films. Even the Sherlock Holmes films have fun taking their time to re-evaluate various crime scenes by backing up and rearranging the pieces. And where would Ritchie be without the use of slow-motion? Well, it all plays a role in The Gentlemen as well, which continues to cement Ritchie’s kinetic style as one to enjoy as a way of mixing up the presentation of this genre. 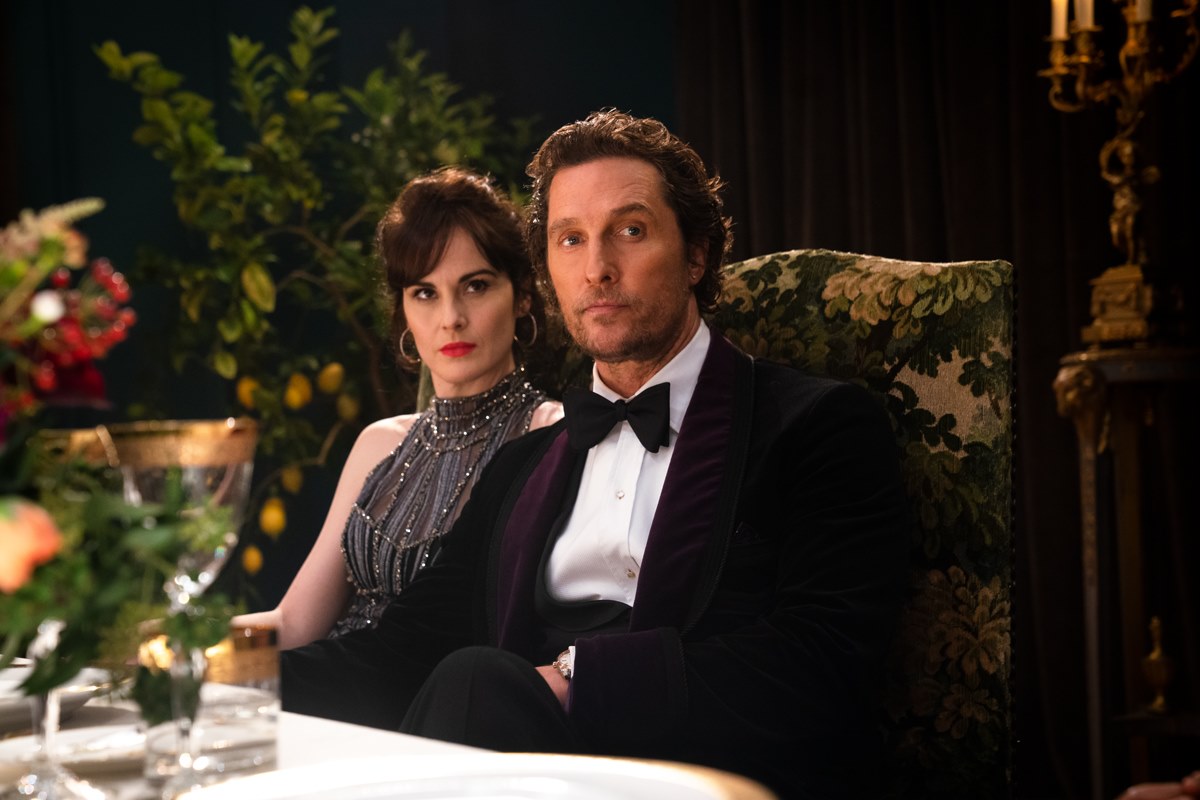 There is a bar to clear as far as getting with the rhythm of the film. Still, once The Gentlemen finds its footing, there is a lot of fun to be had with how Ritchie has decided to let the story unfold, revealing the characters for who they are. Honestly, much of the film feels designed around various dialogue-heavy moments, where he could place actors he likes into a scene and let them chew on the scenery while delivering story-driven metaphors, analogies, or other clever turns of phrase, before a quick burst of action. Given how successful the film is in tying these various highlight moments together, it doesn’t become a problem. Instead, the resulting movie successfully tells its story, leaving the viewer with the memory of a terrific cast who must have had a great time making this movie.

Take Colin Farrell, for example. He enters the film as Coach, a character who is the least connected to the criminal world everyone else exists in.  His introduction revolves around him trying to get into a proper argument with a few hoodlums who were rude to him. We think we learn everything we need to know about Coach here, only for the film to delve further into what he’s all about, which includes his ability to acknowledge a situation and take the appropriate responsibility required. It allows for an understanding of how he conducts himself but also plays into one of the best aspects of The Gentlemen – its title.

The title of this movie is quite apt. Despite being a film about individuals who are involved in drugs, murder, and other sorts of crimes, there’s constant professionalism on display. Except for Golding’s Dry Eye, each of the characters presents themselves as either those who have a certain level of class and respect for how they conduct their business or at least strive to obtain that level of status. After a year of films that took on class-based societies under the guise of horror flicks or other sorts of genre features, The Gentlemen may not be as intent on reaching that level of more in-depth analysis. However, in terms of watching Ritchie break away from some of his familiar traits when working in this atmosphere, I was impressed with how he expanded on what he knows.

After working in the realm of blockbuster filmmaking for over a decade, I was curious to see if the pent-up energy from delivering cleaner, four-quadrant audience pleasers would lead to an all-out gangster movie, bursting with what Ritchie wished he could do with his characters, be they street rats or King Arthur. Instead, The Gentlemen is more focused. Yes, everyone delivers a lot of… colorful language, and some genuinely hilarious bits go big for the joke (keep an eye out for “The Toddlers”). However, that cool energy that turned his early films into cult favorites still runs through this feature.

Working with such a strong cast, it’s easy to see why. McConaughey brings the general lackadaisical appeal he has to his part, fitting for a weed dealer. Hunnam is always better when he gets to play British. Golding seems to be having a ball going big as the craziest cat this film has to offer. There’s not a lot of room included for women here, but Michelle Dockery’s role as Rosalind, Mickey’s no-nonsense wife, is in on the wavelength of this film, and she has her own standout sequence to go along with the rest of the boys. And the rest of the cast falls in line as well. For a movie that’s big on good actors wearing wigs, hats, and facial hair, along with some added accents, there’s a lot of fun to be had, that was seemingly shared by all.

I suppose The Gentlemen hits on the border of being too clever for its own good quite frequently, thanks to the constant references to how movies are made. Still, any film that ends up feeling close to Seven Psychopaths is not too much of an issue for me. Once The Gentlemen finds its groove, there’s plenty to enjoy. It’s not especially deep, but it offers the opportunity for a lot of performers to show an audience a good time while letting Ritchie dive back into a world he likes to disassemble through is own specific means. All of that and the film has plenty of class. 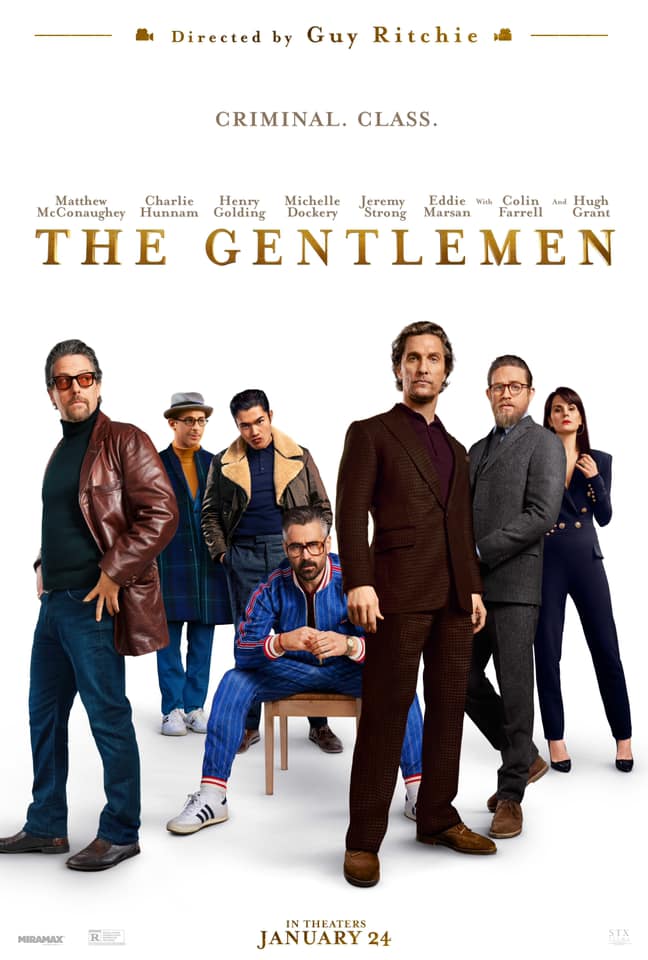