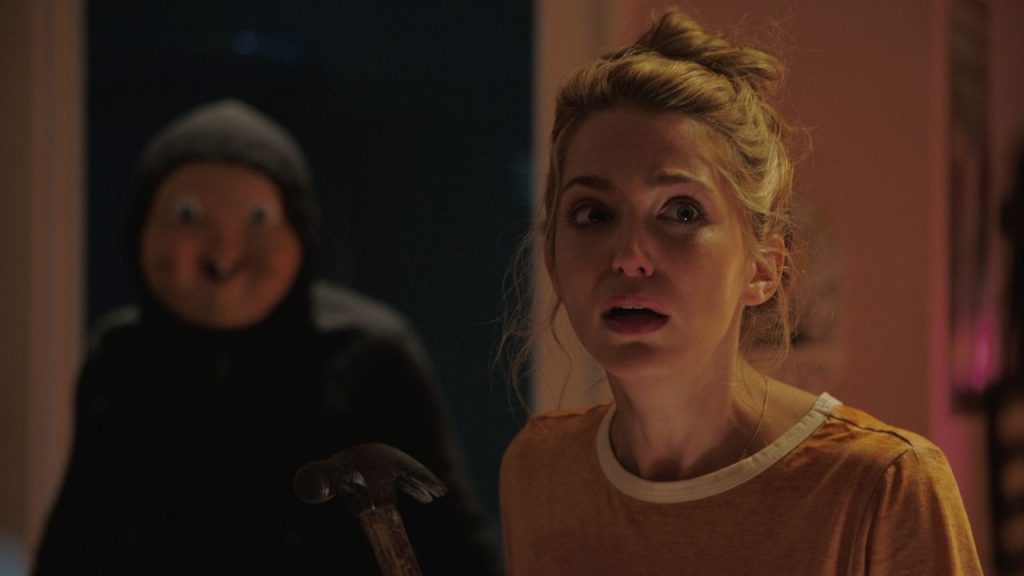 I wish it were easier to say Happy Death Day is the horror film to see this October. This entry in the Blumhouse cannon does its best to get by on a clever premise that is becoming more and more popular, but what am I supposed to do with a film that feels so slight. Finding ambitious ways to take on the slasher genre is welcome, but I couldn’t shake the feeling that Happy Death Day chose the easy way work with its high concept structure. This will likely pass for those seeking some simple fun, but the film feels like it just delivers a slice and not the whole cake.

Jessica Rothe stars as Tree Gelbman, a sorority girl who wakes up in a random dorm room on her birthday. After collecting her things, stumbling back to her room and dealing with all the other stuff going on in her life that day, it comes time to head to a party. While on route, she is murdered by a masked figure. This is where things get interesting, as Tree wakes up at the beginning of the same day. A couple of deaths later, Tree gets the idea – she’s stuck in a time loop. The rest of the film focuses on her mission to solve her own murder, which has the unfortunate side effect of suffering death after death after death.

It seems impossible not to mention Groundhog’s Day (even the movie decides it can’t resist this notion), but that is one of the more popular films to use the time loop concept. It’s a great concept, given the potential and it’s seemingly becoming more popular. 2017’s teen drama Before I Fall and Netflix’s Marlon Wayans comedy, Naked, both feature time loops as their gimmick. Using the idea for a slasher movie is pretty ingenious, as it allows for a strange level of satisfaction when considering the traditional “final girl” type also being the only victim. 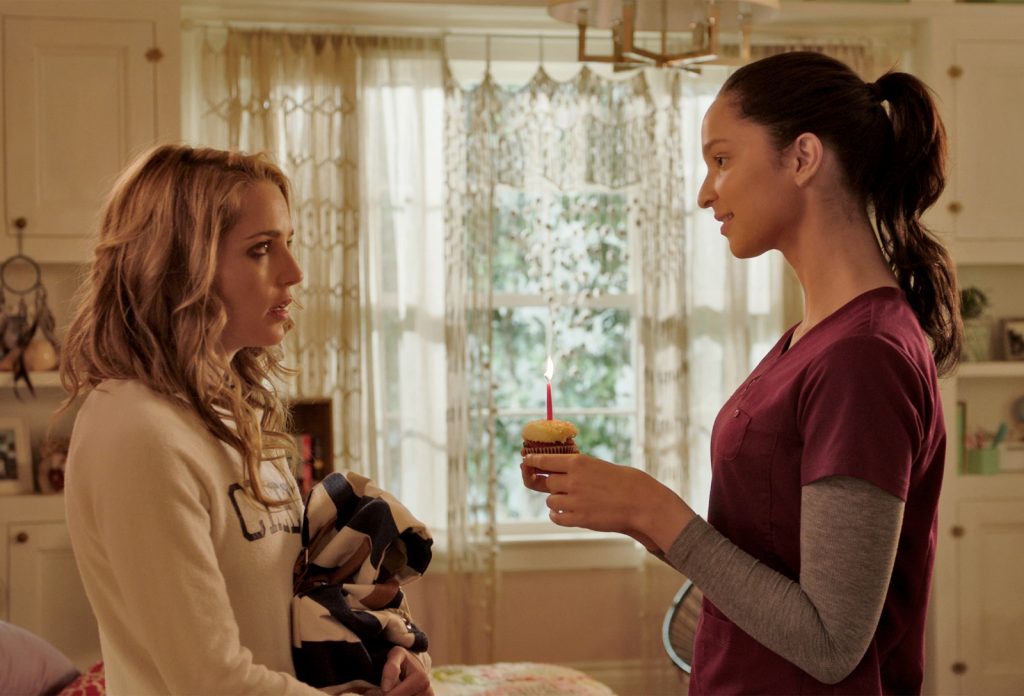 At this point I feel trained to be on the lookout for things when I know I’m going to be stuck in a time loop. The added fun of a film like this is working with Tree to figure out this mystery. There’s an enjoyable element to spotting all the details in Tree’s first day, knowing that most of them will come back in some way as the film goes on. However, part of the reason the film ends up falling flat is that too much introduction of new material becomes apparent and takes away from where things had been heading.

Nothing is ever coming too far out of the blue, but for a reasonably quick-paced film, certain aspects crop up midway through that feel like padding. Details regarding Tree’s physical state, as her deaths pile up, end up meaning nothing. The understanding of why this is happening to Tree is murky, although unnecessary to explain as well. It’s a film that feels like it chose to be less interesting than it knows it could be, which is unfortunate. Not that Happy Death Day needs to be a cerebral mind-bender, but some added stakes beyond the threat or more bloodless kills would have been welcome.

Some inevitable things must happen and one of those is worthwhile. Tree begins the film as an unpleasant person. She’s likable enough to want to follow her journey but you can tell the movie will have to show her realizing she’s not a very nice person and look to rectify this. It gives Rothe enough work with as an actress, but the material is too thin to call it a breakout performance. The same can be said of Israel Broussard as Carter, the nice boy who lives in the dorm Tree wakes up in. He shares some natural chemistry with Rothe and while he is, by design, limited in qualities, it makes for a solid co-starring role. 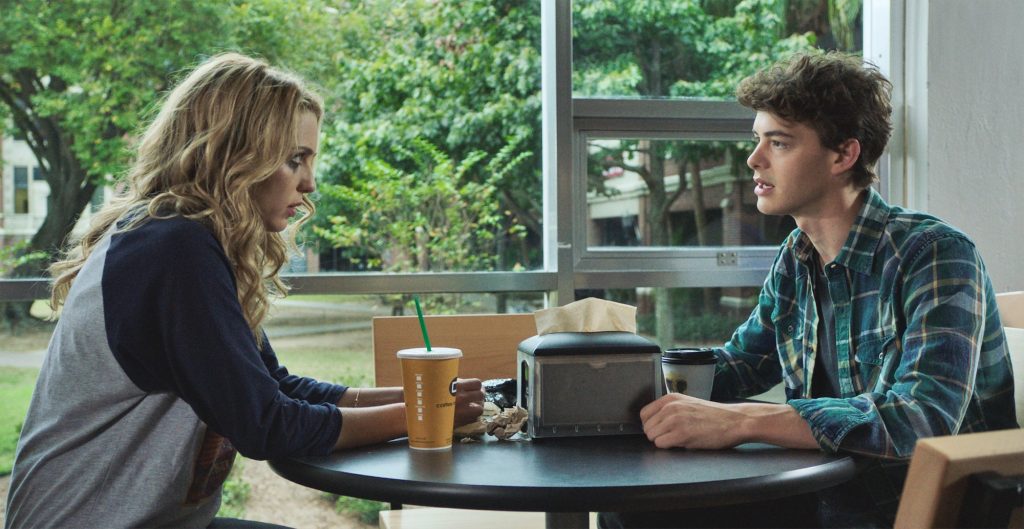 Director Christopher Landon, responsible for writing four Paranormal Activity films and directing one (The Marked Ones), finds plenty to do visually with this movie. While stuck in one day, the effort is still there to make a colorful film with some elaborate setups for tension and humor. That may be the best thing to keep in mind. Happy Death Day traffics in horror conventions, but the film is much more about having fun than being scary. This is horror-lite, and while that is perfectly acceptable, given the overall quality, the fun factor only takes this film so far. Some more post-modern wit would have been welcome.

Perhaps it’s a matter of expectations being a bit higher, given the time loop conceit, but Happy Death Day only mostly works. The “aha!” moments never really register as anything all that clever, and its presentation is one of a fun ride over crafty suspense. The actors all put in the effort, which I tend to find interesting, as it requires finding different tweaks in the same performance over and over again. These are all details that make the film worth a look, but it still feels like a minor effort that is all frosting and no other layers. 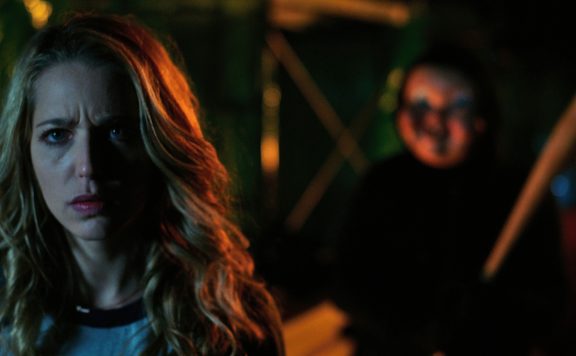